Patrick Roddie posted a video and asked me to debunk it. The video shows two large planes flying parallel. Roddie seems to assume that the planes are at the same altitude, and asks "is this legal?" He also helpfully gives the time as "about 12-ish" (which would be PDT, hence about 19:00 UTC)

MJ Bournon has already posted two likely planes in a comment on the video: 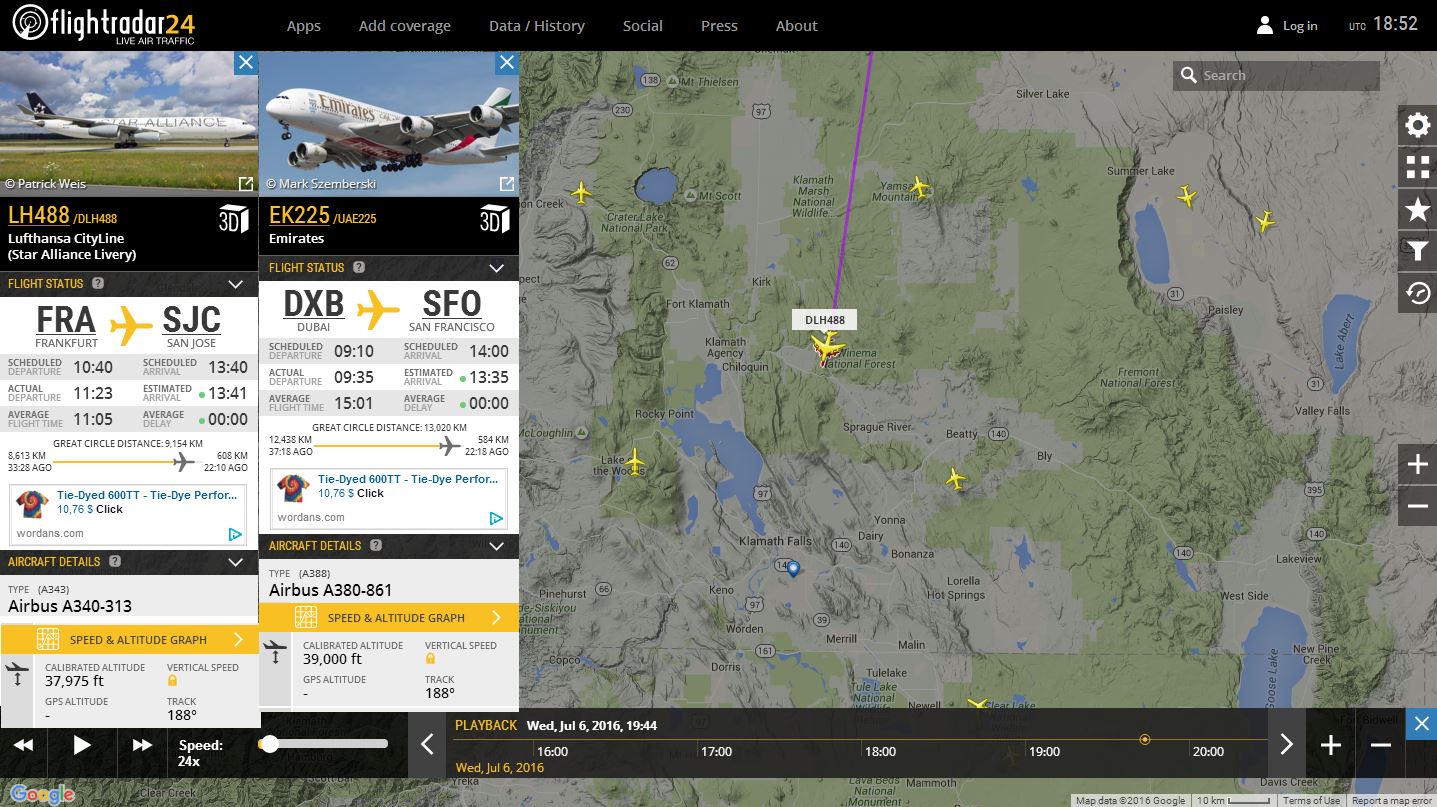 These are a good visual match for the planes in the video, when Roddie zooms in on the upper plane you can see the red Emirates logo under the plane, and the distinctive thick bodied shape of the A380 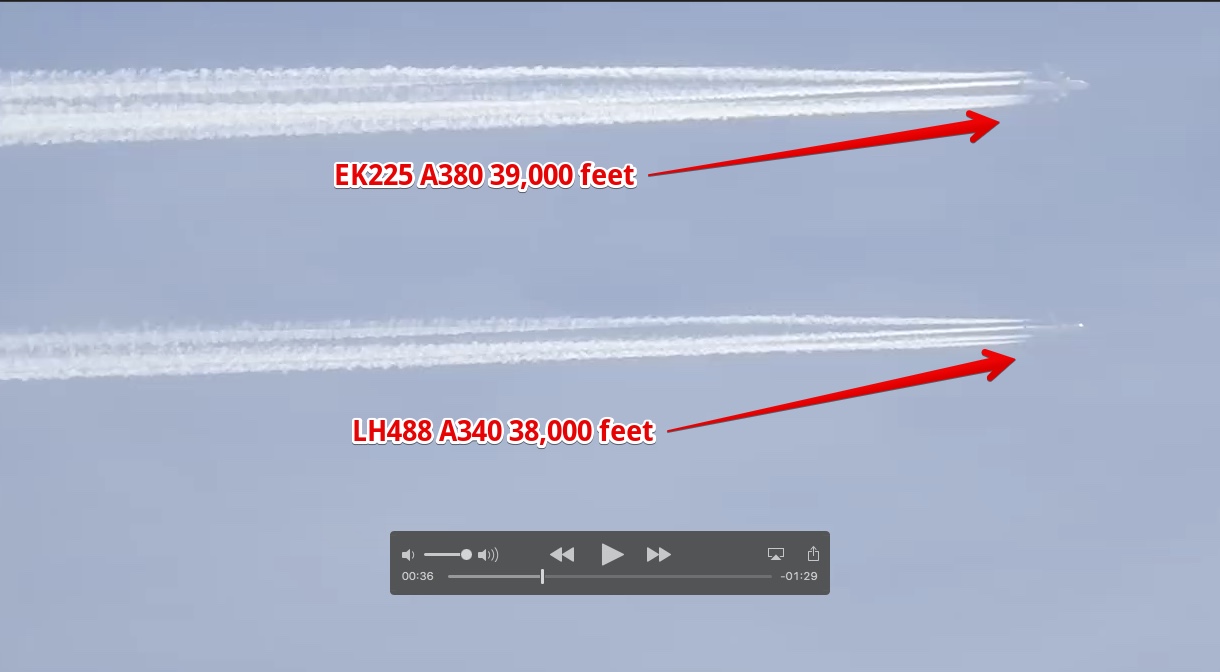 To the question "is this legal", the simple answer is "yes", and most high altitude commercial air traffic in the US (and most of the world) operates under RVSM, meaning that planes must be separated vertically by a minimum of 1000 feet.

It's interesting here that the planes have only a 1,000 foot separation though as in the FAA's procedures for RVSM (page 253), they show that planes flying in opposite directions are interleaved, so plane flying in the same direction should be 2,000 feet apart. 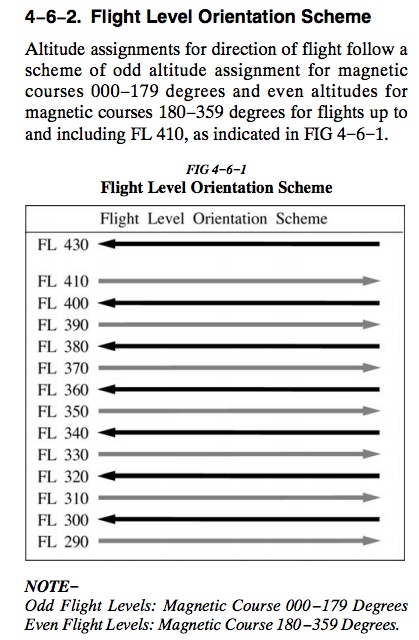 However these interleaving guidelines are largely intended for east/west traffic, and breaks down somewhat when traffic is flying to the magnetic north or south, and is especially problematic for planes flying over the north pole region. A plane cannot simply hop 1000 feet up or down as it goes from 179° to 180°. Also you've still got to contend with all the east-west traffic. So basically the "correct" altitude for roughly north/south traffic is whatever ATC tell you, to avoid other traffic.

Magnetic North is also not the same as true north. In that region, the magnetic north is about 14°, putting magnetic south at around 194°. 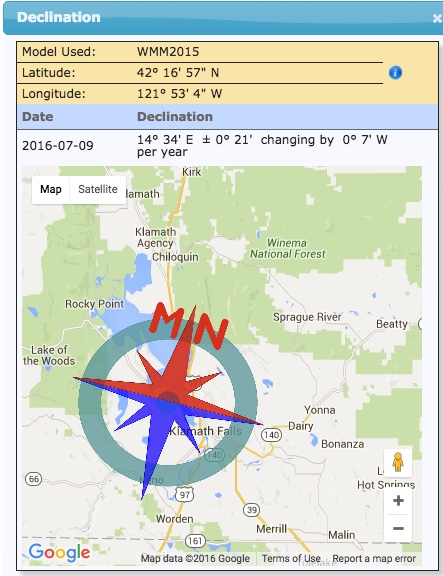 At that point both planes were on a track of 188°, just 6° from magnetic south, technically eastbound, so FL380 (38,000) would have been a preferred altitude.

And if we look back in time a bit (see attached KML files) we can see that both planes were actually at 38,000 feet a few minutes earlier, however they were 13 miles apart. Before they came together for their approach to SFO, the Emirates A380 climbed 1000 feet to 39,000 feet, and then just after passing Roddies viewpoint in Chiloquin the A340 dropped 1000 to 37,000 feet. 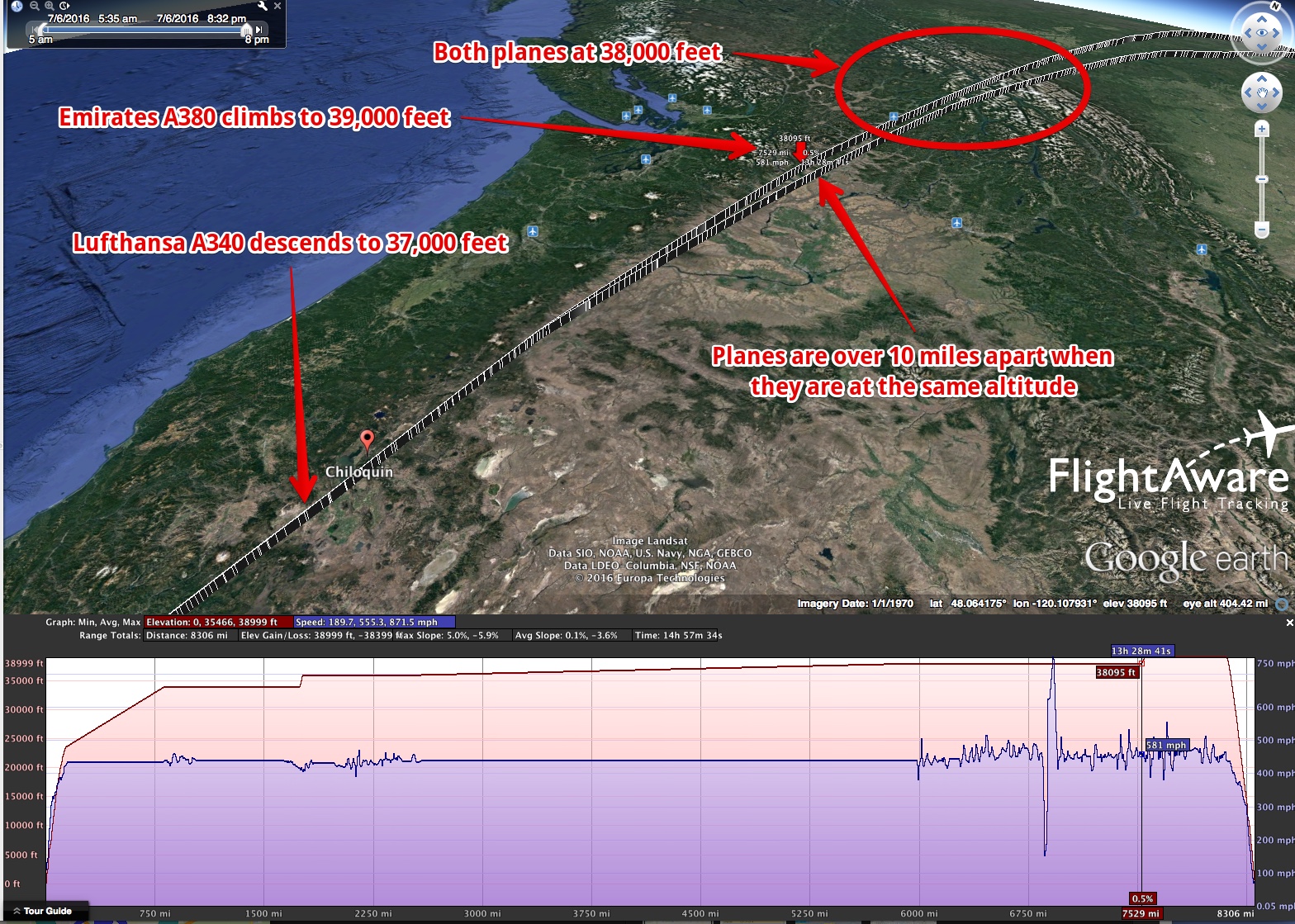 So Roddie only saw the planes during that brief period when they were (quite legally) flying 1,000 feet apart (vertically). The Lufthansa plane was probably beginning it's descent during that video. 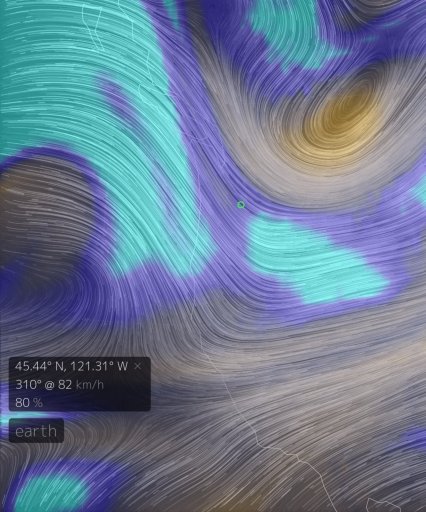 This happens all the time. Aircraft on converging tracks are routinely separated under radar control by climbing or descending 1000 feet.

Staff member
Roddie is having doubts about the planes being 1000 feet apart: 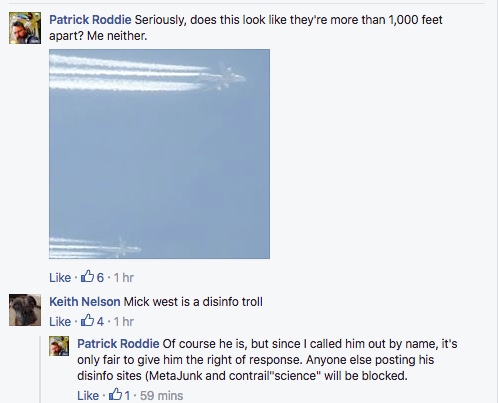 Relative height of different planes can be difficult to discern from such an image, but we can get some useful baselines from the length of the planes, at about 38 seconds into the video the planes are at right angles to the viewer, so their lengths will be accurate measures. The A380 is 238 feet long, and the A340-300 is 208 feet long. If we assume that the planes are directly one above the other, and given the view angle, then that's at least 1,000 feet: 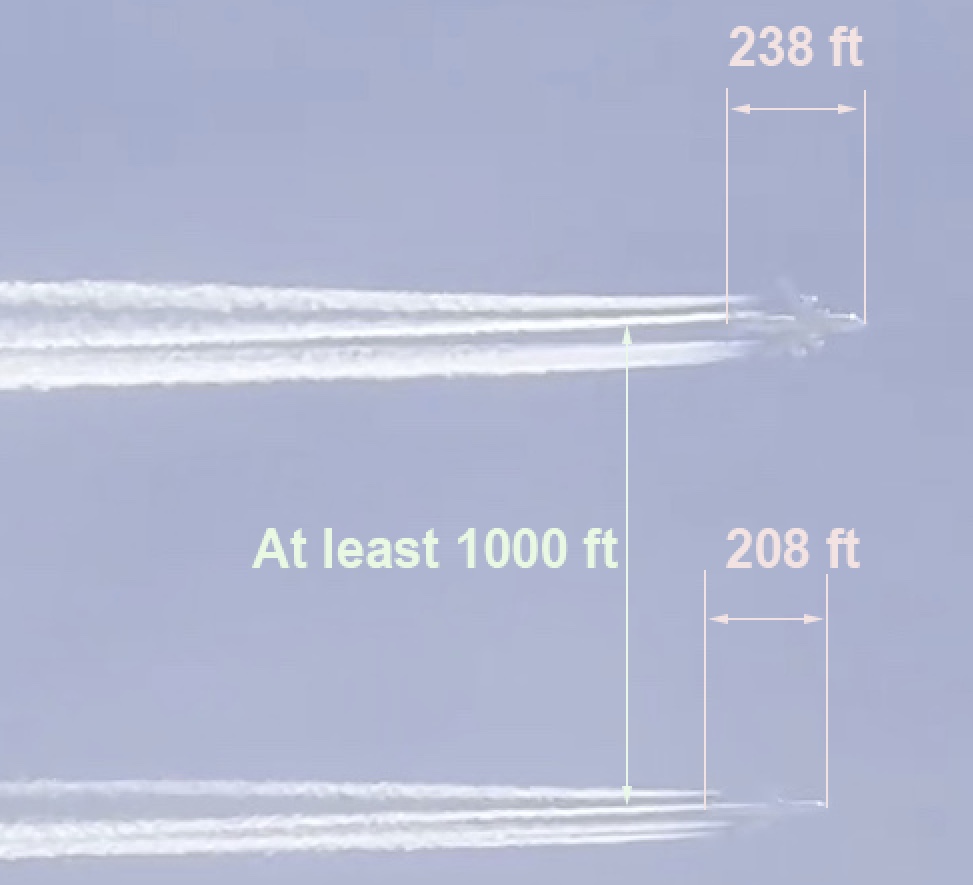 However we should not make the mistake of assuming that "closer to the horizon" always means lower. In this case as the planes are about ten miles from the camera, and seven miles up, it's difficult to say with certainty which is higher from a simple visual examination. So in this case we can simply say that the image is entirely consistent with the planes being around 1,000 feet apart.
Last edited: Jul 11, 2016

Mick West said:
Roddie is having doubts about the planes being 1000 feet apart:
Click to expand...

you shouldnt have confused him with all that Magnetic North stuff.

Has Patrick Roddie removed the pages from Facebook? I just get a "Page Not Found" link.

No surprise there as he also removes comments from the video on You Tube. I posted some RVSM videos which I thought would have been useful for his followers. I made no link to Metabunk or this thread.

Just to highlight that he is asking for answers in the video but removes them. Why Patrick?

OK all you FAA experts. Is this legal? (laughs). I don't think so?

Content from external source
Two of the RVSM links that were removed.

I've re-posted the two links on his You Tube video. Surely if he is seeking answers then he will allow the RVSM videos to remain?

Did Patrick soften towards you, Mick, between posting this video (where he calls you a "disinfo agent" and this website "metajunk") and doing the discussion with you earlier this year?

Does he still delete reasonable but oppositional comments from his facebook/youtube?

Rory said:
Did Patrick soften towards you, Mick, between posting this video (where he calls you a "disinfo agent" and this website "metajunk") and doing the discussion with you earlier this year?
Click to expand...

I think he understanding that I'm just a regular person who disagrees with him, but it's hard to tell.


Rory said:
Does he still delete reasonable but oppositional comments from his facebook/youtube?
Click to expand...

Try posting one and see
You must log in or register to reply here.

Related Articles
Explained: Large Cigar Shaped Object Caught Shooting Into Storm Cloud In Spain [Reflection]
Large Images now Resize Down to 1600 Pixels Max.
Help me to understand - Photos and Videos with very large numbers of contrails
Operation Large Area Coverage
Corbell: "Unidentified glowing objects near US Navy ship" [Planes or drones?]
Satellite ADS-B Data in FlightAware24 - Blue Planes Prove Globe Earth
UFOs Filmed from Moving Helicopters and Planes. Not So Fast!
Flares in the Sky? [Landing Lights of Planes landing at Phoenix Airport]
Explained: Why Planes Get Dented Nosecones - It's Mostly Birds
Donald Trump initially said he thought there were "bombs" on the planes on 9/11
How Do You Take Good Photos of High Altitude Planes and Contrails?
Automated Video Tracking of Planes
Three Planes Turn Right, South of San Francisco
911 video with edited out planes.
What might these three planes be?
Contrails from Turboprop Planes at lower than typical altitudes
Explained: Dark contrails behind bright planes
Two planes at the "Same" Altitude, only one leaves a trail
Claims Ukranian military using civilian planes as cover
Debunk this [Planes at different altitude and different contrails over France]
Racetrack Contrails and "Bizzare" Planes off the Yorkshire Coast
How could the planes wings penetrate the WTC?
Two planes in Germany flying Racetrack patterns together [Likely Eurofighter Typhoon Practicing]
Tip: Planes with "No callsign" in FlightRadar24
Reward to catch people who point lasers at planes
9/11: Any Evidence for remote controlled planes?
Debunked: US Reported In Panic After Chemtrail Planes Forced Down In India and Nigeria
A new low from Aircrap.org - Disney's Planes
No planes today
Photos of Planes and Contrails (That you took yourself)
Identifying chemtrail planes
Debunked: Chemtrail Plane and Other Unlabeled Photos from Facebook etc.
WTC: Were the planes drones, how hard is flying a 767 into a building?
"Unmarked planes"
Explained: UFOs that look like flares or fireworks [Aerobatic planes with wingtip pyrotechnics]
Advocating violence against "Chemtrail" planes, pilots, scientists, and debunkers
Crossing planes [Planes at different heights]
White Flying Object Over US Navy base in Japan (July 2021)
Cruise Ship Captain Reports Silent "Black Jellyfish" Flying In "No Wind, Maybe 5 Knots"
Flying Object Timelapse - Cape Hatteras Lighthouse
UFO Billboard in Montana Uses Photo of Identified Flying Object
Illusion of Contrail Asymmetry from Flying perpendicular to the Sun
Unknown flying insect or object
Sideways Flying UFO Hawk
A Plane Flying Across the Face of the Sun, with Contrails [Virgin Flight 353]
Demonstrating the curvature of the Earth by Flying in a "Straight Line" Near the Poles
Explained: Exmouth UFO Flying Saucer - Sunlit Contrail and Motion Blur
Four Engines, Flying West over Sacramento
UFO with navigation lights, Drone or aircraft? [Low Flying FedEx 777]
Explained: Why flying isn't impossible on a globe
Share:
Facebook Twitter Reddit Pinterest Tumblr WhatsApp Email Share Link