Debunked: Pentagon has Evidence of "Off-World Vehicles Not Made on this Earth"


Eric W. Davis, an astrophysicist who worked as a subcontractor and then a consultant for the Pentagon U.F.O. program since 2007, said that, in some cases, examination of the materials had so far failed to determine their source and led him to conclude, “We couldn’t make it ourselves.”

The constraints on discussing classified programs — and the ambiguity of information cited in unclassified slides from the briefings — have put officials who have studied U.F.O.s in the position of stating their views without presenting any hard evidence.

Mr. Davis, who now works for Aerospace Corporation, a defense contractor, said he gave a classified briefing to a Defense Department agency as recently as March about retrievals from “off-world vehicles not made on this earth.”

Unfortunately, this has been repeated in other media as some kind of official Pentagon statement that they have pieces of an off-world craft. It is not.

What it is is a statement (with very little context) by Eric W. Davis, and Eric Davis is not the Pentagon. He's a scientist at Earthtech, an organization formally known as "The Institute for Advanced Studies." Earthtech basically is composed of two people, Harold Puthoff and Eric W. Davis. 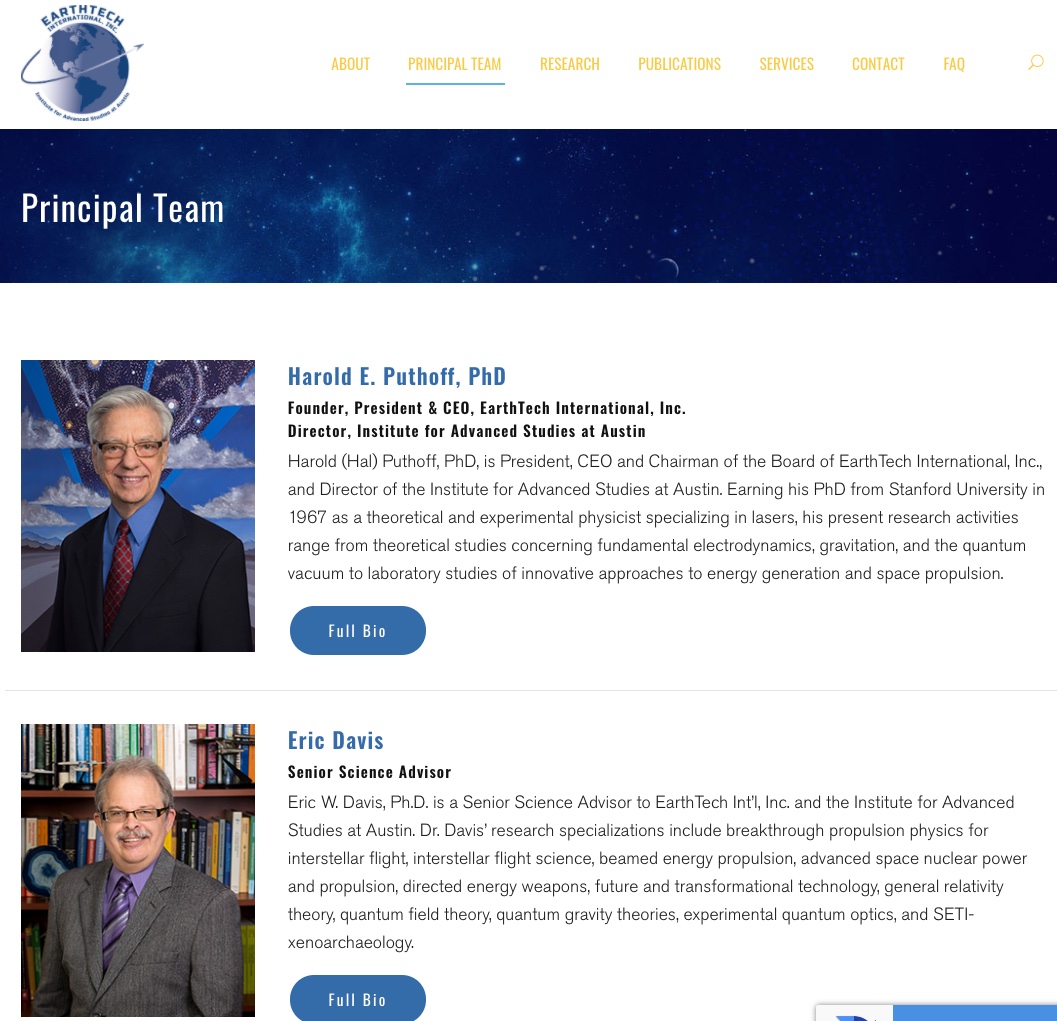 Puthoff is well known in the skeptical community for being fooled by Uri Geller into thinking Geller actually had psychic powers when Geller was just using conjuring tricks. But he's also very interested in the holy grails of alternative science: free (zero-point) energy, and reactionless propulsion.

So Puthoff's and Davis' work is, by its very nature, highly speculative. In his list of EarthTech publications, the first one is "Are Stars Conscious?" - but we don't see people shouting "The Pentagon thinks that stars are conscious!"

The military sometimes funds very speculative research projects, just in case, or perhaps just because someone overly-hopeful though something was worth studying. Eric Davis has been part of this for quite a long time. Some of the research is fairly reasonable - things like space elevators or laser-powered spacecraft. Some is borderline ridiculous, like his 2004 "Teleportation Physics Study," in which he bases his conclusion, in part, on Uri Geller's conjuring tricks.


Psychic Uri Geller (1975) is the original model for demonstrating
PK [Psychokinetic] metal bending. During a talk that he gave at the U.S. Capitol building, Uri caused a spoon to curve
upward with no force applied, and then the spoon continued to bend after he put it back down and
continued with his talk (Alexander, 1996). Jack Houck continues doing extensive experimental work and
data collection on micro- and macro-PK phenomena. [...] In the 1980s,
Jahn attended a meeting on the PK topic at the Naval Research Laboratory, and warned that foreign
adversaries could exploit micro- or macro-PK to induce U.S. military fighter pilots to lose control of their
aircraft and crash.

Of course, many people think that PK phenomena are real, and hence this all does not reflect badly on Davis. They are demonstrated wrong by the simple fact that stage magicians have consistently demonstrated that they can fool scientists, and no psychic of any kind has managed to replicate their powers in an environment under the observation of stage magicians skilled in this art (like James Randi).

So no, it's just Eric Davis (and the people around him, Puthoff, Harry Reid (tentatively, he's still a politician), Tom DeLonge, and the rest of the TTSA/Unidentified crowd. The Pentagon is no more saying they have pieces of flying saucers than they are saying that Uri Geller could bend a spoon with his mind.

Correction. For whatever reason, Dr. Eric Davis has moved on from Earthtech. In late 2019 he began working for the Aerospace Corporation in Huntsville, AL. He's also picked up a new affiliation, he's a member of the Scientific Coalition for UAP Studies (SCU).

I wish there was an expert lab, with an expert "materials science" person (or persons).
....who, would not be informed, as to the purposes of any study.
Eliminate bias as much as possible.

Curt Collins said:
Correction. For whatever reason, Dr. Eric Davis has moved on from Earthtech. In late 2019 he began working for the Aerospace Corporation in Huntsville, AL. He's also picked up a new affiliation, he's a member of the Scientific Coalition for UAP Studies (SCU).
Click to expand...

He's still listed on the Earthtech web site, and it's on his LinkedIn page. Did he actually leave? Where's the info about him at Aerospace?

I doubt the Puthoff connection has been severed even if Davis no longers works with him. The Aeorspace Corp. notice was posted on his Facebook page. Apparently Bryan Bender has checked with his employer. Check out this Twitter thread for more details. Source: https://twitter.com/MC05A/status/1286409521557131265?s=20

Sen. Harry Reid denounces the article, and the NYT issued a correction:

Correction: July 24, 2020
An earlier version of this article inaccurately rendered remarks attributed to Harry Reid, the retired Senate majority leader from Nevada. Mr. Reid said he believed that crashes of objects of unknown origin may have occurred and that retrieved materials should be studied; he did not say that crashes had occurred and that retrieved materials had been studied secretly for decades. An earlier version also misstated the frequency with which the director of national intelligence is supposed to report on unidentified aerial phenomena. It is 180 days after enactment of the intelligence authorization act, not every six months.

Thanks for posting Mick as I wasnt sure exactly how to look at Mr. Davis's claims. Sensationalist articles have come out since paraphrasing the crap out of this article

Like who's Tucker Carlson? I don't need him to "break it down" they literally twisted the contents to for a different narrative.

Hi Mick. I first heard of you when you were on the Joe Rogan podcast. Joe seemed to agree with you on just about everything. Then Tom Delong was brought up and he was also on Joe's podcast. And Joe was very respectful when he was on his show but when talking to you he really kinda ripped into him. Suggesting even that he may have been on Aderol. Then last week he had on George Knapp and that guy Jeremy from the Bob Lazar documentary. And I use the term documentary loosely here. Joe Rogan really seems to be buying into lots of this UFO stuff and even brought your name up and suggested something on the lines of how ridiculous your explanations have been for the Navy pilot videos. Do you think it's a game he plays for his audience? Will you go back on his podcast? I hope so.

Let's not forget Puthoff is a board member of To The Stars Academy. 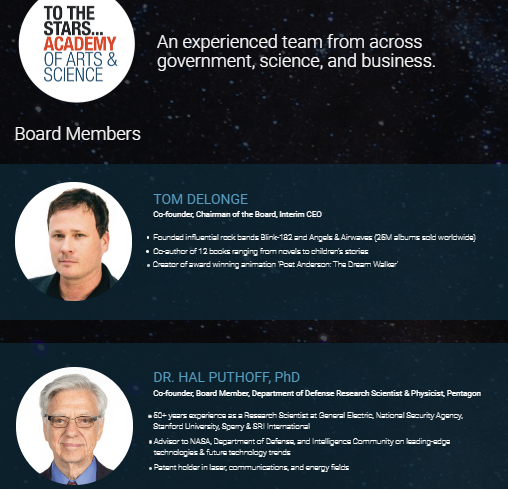 And yeah, that Davis 2004 Paper was panned as crackpot science back in the day 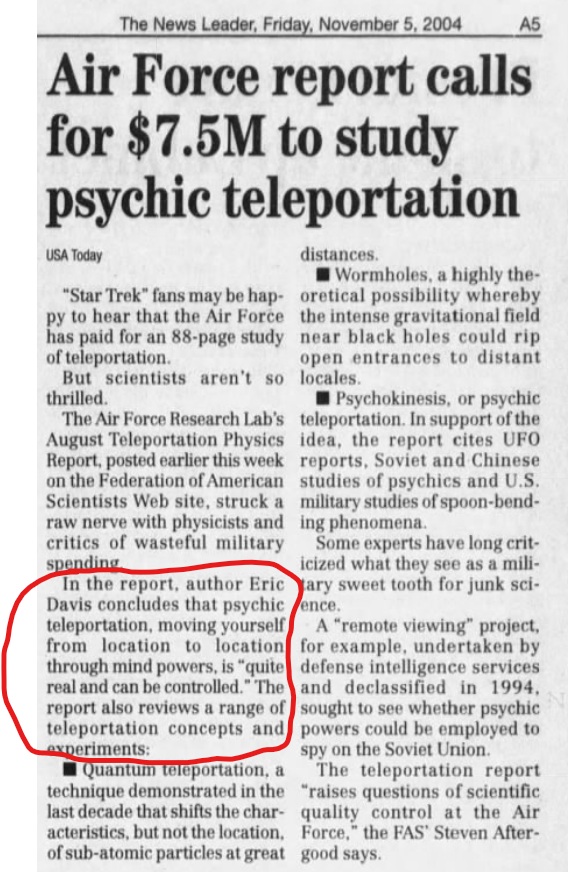 To clarify Eric Davis' role, check out this TTSA video, that seems to have been test footage for what eventually became their "Unidentified" TV show. Davis is there along with Puthoff when Elizondo wheels in with some alleged UFO crash material.
Source: https://youtu.be/MzrnJtNbwZE?t=92

Basically it's analyses from the materials Elizonda presented here in this 2019 presentation that has been talked about before. Should play at the correct time stamp 39:41 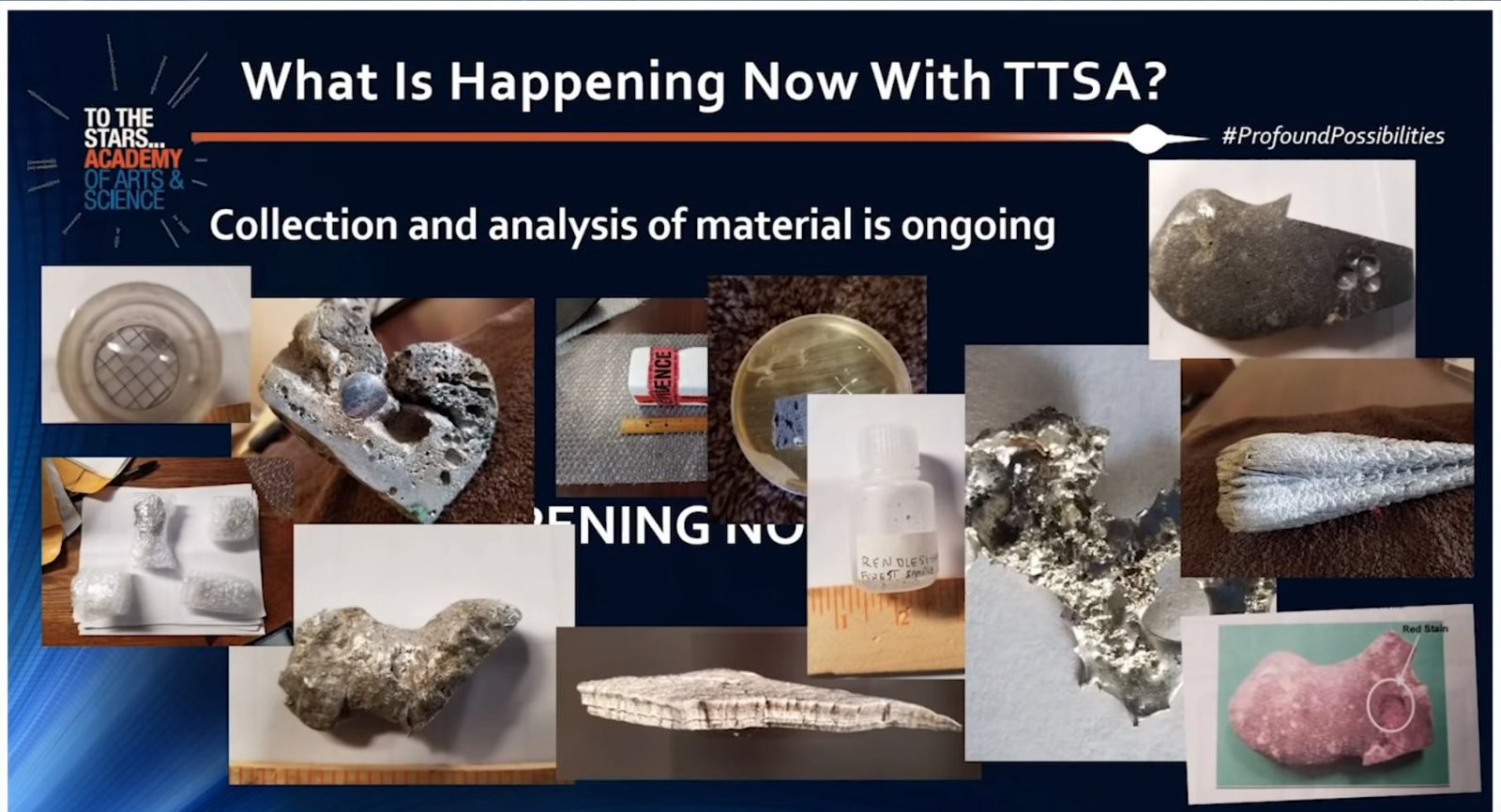 jackfrostvc said:
Basically it's analyses from the materials Elizonda presented here in this 2019 presentation that has been talked about before. Should play at the correct time stamp 39:41

So he says some are special and some aren't and essentially he's hoping material scientists can help ID these materials better? Was there an official statement on the results?

derrick06 said:
@jackfrostvc Quick question for you in my previous post in this thread if you got a sec
Click to expand...

I haven't heard any official results statement, but to be fair I haven't really been following it much

Gochya. Thanks!
You must log in or register to reply here.