Staff member
The latest chemtrail believer to inadvertently demonstrate that the chemtrail theory is impossible is Russ Tanner, of Global Skywatch.

On his Facebook group he recently posted this:
http://archive.is/3iBQB 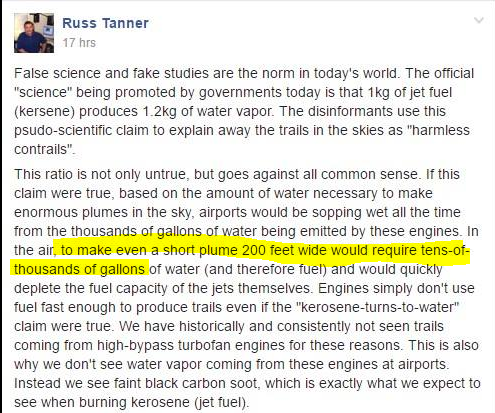 He says that to make even a short plume would require tens of thousands of gallons, so it cannot be water being produced from the fuel. So how, then, can it be some chemical sprayed from the aircraft instead? The volume required would surely be similar?


(As for the exact accuracy of his claims: Knollenberg came up with a figure of about 30kg of water per linear metre in a persistent contrail from a small jet, which equates to about 8 gallons of liquid water per metre, or about 2.4 gallons per linear foot. It's not clear what Tanner means by "a short plume 200 feet wide" as he doesn't specify other dimensions, or whether he means a persistent or non persistent trail.)
Last edited by a moderator: May 26, 2016

It wouldn't be hard for Tanner or anyone else to find out how much fuel an Airbus or Boeing jet consumes.
Also it is not hard to use some science and calculate the ratio of 1 to 1.2 for water produced by burning kerosene.
Nothing pseudoscientific about doing that, Tanner. What is pseudoscientific is his contradiction without showing the facts. If the facts were on his side he could, but they are not so he doesn't, or can't. His claim that water vapor produced at an airport being seen is nonsense. Water vapor is invisible, unless it condenses into droplets or freezes into ice crystals like a contrail.

Here is a helpful graphic based on Knollenberg's work:

The key to understanding Knollenberg is to realize that almost all the mass of the persistent contrails people like Tanner call "chemtrails" comes from water vapor pre-existing in the surrounding air, not just from the engine exhaust.

https://www.metabunk.org/how-much-water-is-there-in-jet-engine-exhaust.t4018/
You must log in or register to reply here.