A woman who claims to be a former NASA employee claims to have seen evidence of the most monumental cover-up in space history in 1979 – as she saw two human figures in space suits walk calmly towards the Viking lander (the grandfather of today’s Mars Curiosity Rover) across the Martian surface.

‘That old Viking rover was running around,’ she said, saying that she and six colleagues were watching on multiple screens. ‘Then I saw two men in space suits – not the bulky suits we normally used, but they looked protective. They came over the horizon walking to the Viking Explorer.’

Before anyone chimes in, the Viking landers were not rovers, a Viking Rover was planned for the unflown 1979 launch.

Staff member
Claims without evidence can be refuted without evidence. I take it she has nothing at all to back up her claim? Just something she claims to remember seeing 34 years ago?

Mick West said:
Claims without evidence can be refuted without evidence. I take it she has nothing at all to back up her claim? Just something she claims to remember seeing 34 years ago?
Click to expand...

I generally agree, but IMO, if evidence can be offered to refute, it still should be. In that spirit:


Graham2001 said:
Before anyone chimes in, the Viking landers were not rovers, a Viking Rover was planned for the unflown 1979 launch.
Click to expand...

They also couldn't send back video. Both landers had two still cameras, neither of which created instantaneous photos, but did 5 vertical lines of 512 pixels every second. It could do any width of image by rotating while it scanned, but only 5 vertical lines of pixels every second. A 512x512 square image would take almost two minutes to create, a full panorama (512x9150) took over a half hour to complete.

Simply, it could not capture the footage she claims to have seen. I can't find the bitrate on the high gain antenna, but I don't believe it could send the video back if it could, and it definitely didn't have enough data storage (1280 megabits on a tape drive on the orbiter) to buffer it.

They used one of the cameras to take a picture of the program staff. Several people moved and are distorted in the picture. A few actually appear in the picture multiple times because after the camera scanned past them, they walked around it and got back in line farther down.

This is the staff photo. As you can see, people are cut in half, or weirdly clipped and distorted. Several people appear more than once. And they had to stand still quite a while in the desert for this. I've read that if you have the larger version, you can actually see the sweat stains on a few people get bigger from right to left as the camera scanned them.


Also, this is what happens if something moves more than just a little bit while the picture is being taken:

This is the very first picture taken by one of the Viking cameras. The vertical lines, marked with arrows, are not defects, but the lines being scanned when cars drove by.

A very slow turtle came out distorted like this: 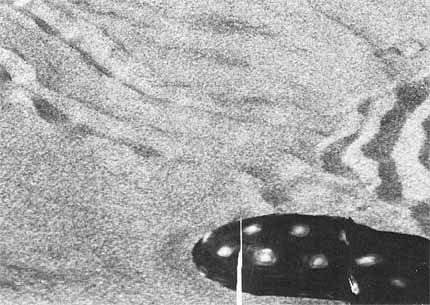 The camera got about two thirds of the way past it before it started moving, creating the black smear towards the corner.

Even in a clumsy era-appropriate space suit in 1/3 gravity, an astronaut would move much faster than a turtle that keeps being messed with by scientists. At best, if they were coming straight towards the camera fairly slowly, they'd be a scrambled mess of nonsense since none of the lines would closely line up with the ones on either side. If they were crossing the frame, they'd only show up as a couple vertical lines that could easily be dismissed as artifacts.

As I mentioned in my Rosetta debunk, in general, video capability is actually really rare on unmanned probes. It takes more power to capture, more data storage to hold, and faster bitrate (and thus even more power) to transmit back to Earth. It's also often of dubious scientific value, depending on the nature of the mission - timelapse (like the "videos" Voyager sent back) is often used, but would be completely useless to create the footage claimed here (and even then, Viking couldn't do effective timelapse either with the way its cameras worked). Unless there's some specific reason (like Deep Impact needing to observe the ejecta spray from its impact probe), they usually leave it at home.

Curiosity has the first true video camera we've put on the surface of Mars and it's limited to 10 frames per second of heavily compressed HD.
Last edited: Dec 4, 2014

Hevach said:
They also couldn't send back video. Both landers had two still cameras, neither of which created instantaneous photos, but did 5 vertical lines of 512 pixels every second. It could do any width of image by rotating while it scanned, but only 5 vertical lines of pixels every second. A 512x512 square image would take almost two minutes to create, a full panorama (512x9150) took over a half hour to complete.
Click to expand...

Well, isn't this already at the point where we would say Q.E.D.? If somebody fabricates a story to get attention, she could at least use a little bit of time on research. This is just pure lazy.

Gundersen said:
Well, isn't this already at the point where we would say Q.E.D?
Click to expand...

I thought so at first, but I kept going. It's not unusual for probes that "can't" do video to still produce video, either through timelapse (which wouldn't show people moving around but the public rarely knows the difference between it and real video) or just taking pictures in rapid succession (which could show people moving around). Viking wasn't even able to do that much.

Gundersen said:
Well, isn't this already at the point where we would say Q.E.D.?
Click to expand...

More to the point the caller clearly had no idea what Viking was (Other than it went to Mars.), but then many of the audience would probably not know much more than that, unless they were curious enough to go to Wikipedia or some other source of information, provided of course they had not been 'innoculated' against 'the official story'.

Orion has less computing power than a smart phone, too, and a lot of tech sites are talking about that like it's a bad thing. The shuttle's computers were years behind consumer level PCs. The ISS is the closest thing to a cutting edge computer system we've put in a manned system, and its best computers are eight year old low end Lenovo laptops.

The thing people don't seem to get is that consumer electronics are very elaborate space heaters for the most part. They're far more powerful than they should be for what we do with them, because they're meant to run pretty interfaces and maintain a smooth framerate when being pushed beyond reasonable use, and are loaded with incredibly bloated modern software that, for all its gigabytes, compared to the older versions that fit on floppy disks adds a handful of features most people don't realize are even there.

When a computer is purpose built with a function in mind, it's an incredibly powerful thing. When it's built to do whatever the user happens to feel like and look good in the process, most of that power is wasted.
Last edited: Dec 8, 2014

And that's when the echo chamber happens. These people hear it and talk about the issue, and it slowly builds as more and more references are made to it. Bunk has never needed real science to back it up. I mean look how Planet X/Nibiru persists even though there is no way in hell that planet could exist as they describe it.

Specifically what I mean is that it's a planet in the solar system that has a bisecting orbit with Earth but also has a 50,000 year orbit. There have been numerous "explanations", like the aliens on it can halt the orbit of the planet, that it is hiding behind the sun away from our view. That point is each of these explanations is more ridiculous than the last and more scientifically impossible, and yet the claim persists with people quoting each other to back up each other. It's like each is naked but insists he or she is richly garbed, and then everyone else in the room agrees just to hide their nakedness. They might all see rich fabrics and patterns and jewels, but to everyone else it's just naked tomfoolery.
You must log in or register to reply here.
Share:
Facebook Twitter Reddit Pinterest Tumblr WhatsApp Email Share Link