Some Islamic rituals are performed using the parameters obtained from various astronomical phenomena. Traditionally, they are determined from manual, self-performed, visual observations. Science allows them to be instead determined from calculations that use the spherical Earth model. The fact that the results of the calculations corroborate with centuries of visual observation proves the Earth is a sphere.

Full disclosure, I'm a Muslim myself. These astronomical observations are something that can be done by everyone, not just Muslims, and the results will be consistent only with the spherical Earth model. Muslims simply provide the results of observation, over several centuries, from plenty of locations on Earth.

Using the knowledge of the correct shape of the Earth, the Qibla can also be determined from spherical trigonometry. This is the same problem as finding the initial bearing of a great-circle route, only with Mecca as the destination. 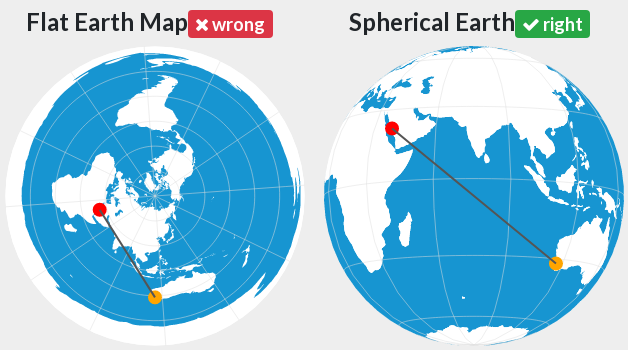 During the sunset in Perth, on May 27-28 and July 15-16, the direction to the Sun is the same as the Qibla. Spherical trigonometry will give us the correct direction, while the result from the flat Earth model is about 32° off.

If the sun is below the horizon when it is directly above Mecca, it is not possible to do the observation above. It will be necessary to do the reverse: when the sun is above Mecca's antipode (in the Southern Pacific Ocean, close to Tematagi Island, French Polynesia), the direction away from the sun is the same as the direction of the Qibla. In other words, the shadow of an object will point to the Qibla. This occurs on January 12-13 at 21:29 GMT and on November 28 at 21:09 GMT.

I created an online tool for comparing the Qibla in the flat vs globe Earth model here: kiblat.bumidatar.id. It is in Indonesian, but usable in English using Google Translate.

2. Salah/Praying Times
There are five compulsory prayers every day, each with a specific time range to do it.
Traditionally, praying times are determined from visual observation, but practically nobody does that anymore. Most Muslims today are using tables, apps, or online calculators to determine praying times. All which are the results from calculations using the spherical Earth model.

There are some slight variations of the criteria between different denominations, and many different algorithms to calculate them. Wikipedia has an explanation of how to do the calculation here: https://en.wikipedia.org/wiki/Salah_times; I've seen more sophisticated algorithms that account for altitude, atmospheric refraction, and adjustment for the result to cover an entire city.

It is evident that whatever the algorithm, it only applies to the spherical Earth model, and does not make any sense on the flat Earth model. Case in point, the criteria for Fajr and Isha is defined as the time when the altitude of the sun is 19° and 17° below the horizon (Indonesian criteria, might be different elsewhere). However, in the flat model, the sun never set below the horizon.

3. The Beginning of Month in the Hijri Calendar

A lot of Islamic rituals depends on the determination of the beginning of the month in the Hijri calendar. The Hijri calendar is a lunar calendar that starts on the new moon. The observance of the new moon just after sunset —Muslims call it 'hilal'— marks the beginning of the month. Some denominations regard the visual observation of the hilal is part of the ritual. Others think it is OK to determine it solely from calculations.

The Hilal is determined from the ephemeris, and obviously, only make sense on the spherical Earth model. There are many different convoluted algorithms to calculate hilal, with parameters unclear where they are coming from. For educational purposes, I find it easier to explain it using brute force:


The fact that the results of calculations corroborate with centuries of observation proves spherical Earth. It is not possible to perform the calculation using the flat Earth model and still gives us the correct results.

4. Determining the Occurrences of an Eclipse

Salat al-Khusuf & Salat al-Kusuf are optional prayers during a lunar & solar eclipse. Traditionally these rituals are performed when it is observed that an eclipse is happening. Today, science allows an eclipse to be predicted far before it occurs. This allows the prayer to be scheduled far in advance.

Predicting eclipses can only be done with the knowledge that the Earth is spherical, especially solar eclipses, where it does not happen everywhere on Earth. All the usual arguments involving eclipses also apply here.