Esther18 said:
One has to be delusional to say that there is not spraying going on, and that the effects of the spraying is that clear, sunny days become hazy days
Click to expand...

Why don't you do some reading here:

It many answer many questions for you before you even ask.

Esther18 said:
and why do you want to tell people who have eyes and necks with which to look up, how to feel about their own experience and the time they've spent researching?
Click to expand...

If you look around this site you will see that the members here spend a great deal of time looking at the sky and noticing what goes on up there. The difference is that we also take the time to find out what causes those effects.

I find it quite ironic that the only people who deny what we all see, namely that contrails increase cloud cover, are chemtrail theorists!

Esther18 said:
... One has to be delusional to say that there is not spraying going on, and that the effects of the spraying is that clear, sunny days become hazy days. ...
Click to expand...

The photo file attached to your post shows water vapor forming clouds from aircraft, contrails, not chemtrails. Evidence is required to say there is spraying going on.


You're a bully who has written a whole site to diminish people who have concern.

... , shame on you for requiring evidence, and rules for presenting it. How is bunk able to survive.

The most important part of making claims, having the evidence to support and prove.

Esther18 said:
I don't think that the people seeing and commenting on "chemtrails" (or whatever name you want to give them) are "fringe" at all. As far as I know they're quite mainstream, as often highly educated as not, career people, creative people, engineers, themselves. What Rosalind Peterson was saying, which received no challenge from members of the UN (it doesn't matter the specifics of the type of convention it was, it was an organized convention containing UN members, if it's important to you that the UN lends something credence, although to judge their recent work, people should be skeptical of the UN and calling anyone who really cares what they say "fringe!"), is that there is intentional aerosol spraying going on without consent or forewarning (or any information at all) given to the public. One has to be delusional to say that there is not spraying going on, and that the effects of the spraying is that clear, sunny days become hazy days. Calling people "fringe" because they have concerns about observable events which are fully CONFIRMED by this video as a regular phenomena (she even lists some of the chemicals in use, which really ARE turning up in our topsoil and drinking water), is a form of bullying. I realize that corporations and our own government use such tactics in lieu of being able to be transparent about the way they spend and organize taxpayer dollars, but it doesn't change the name-calling in its nature. You're a bully who has written a whole site to diminish people who have concern. Since you like to use names to taunt people and diminish the weight of their concerns and observations, I'd love to do the same to you. How much education do you have? Personally, I can put you in touch with 5 Ph.D.'s in he various sciences who can engage you in a much better and more clinical, scientific discussion than I can, who find it plainly clear (as clear as the white trails of whatever name you want to give them left by the plains by day) that there is plenty of climate and atmospheric engineering going on, and that naturally, it's making us all ill. Where do you come from and why do you want to tell people who have eyes and necks with which to look up, how to feel about their own experience and the time they've spent researching? You (who wrote this website) are exactly what's wrong with our government and the media. You're all afraid of self-empowered people who educate themselves and form their own opinions about what is important, in this case, human health and environmental protection! Then you find a way to belittle and bully them into submission, ignoring what their eyes and ears and reading confirms. You write website after website making real reports hard to come by. Your agenda is that of a narcissist and a coward, plainly put.
Click to expand...

I wanted to respond to a few of your points.

You seem concerned about the use of the word “fringe” to define chemtrail believers. I am attaching a 2013 Public Policy Polling document. Take a look at question #17. According to the poll, 5% of respondents believed in chemtrails. We could debate whether or not 5% is the “fringe” or not, but it seems pretty close to me. 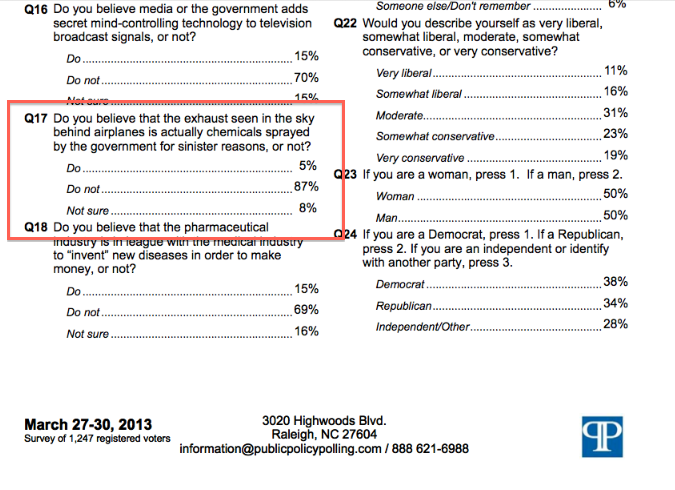 Speaking for myself, I really have to disagree with the characterization of comments challenging Rosalind Peterson as “bullying.” I like this website because it has a politeness policy which makes it far and away better than most of the discussions that I see online.

I don’t think anyone here speaks from the fear of “self-empowered people who educate themselves and form their own opinions about what is important.” I think that you are missing the point.

We look at the evidence. Look at the chemtrail thread.
https://www.metabunk.org/contrails-and-chemtrails.f9/

There are literally thousands of discussions guided by the facts. If anything is going to get called out, it will be bad facts.

So, please keep that in mind as you continue to engage people who may agree or disagree with your opinions, well-informed or not.

5% puts it way below Apollo hoax, 9/11 truth, false flags, Kennedy assassination, Birthers, Bigfoot, Roswell, mind control, etc. More than twice as many believed Obama was the Antichrist and heralded the end of days.

Chemtrails are on the same tier as lizard people at 4%.

Everything on that poll except climate change deniers are lower than many hallmarks of the alt-right like outright white supremacy. The political fringes on both sides are twice as large as most theories on that poll, and most of those are 2-3 times as big as chemtrails.

It's really hard to not call that fringe. Fringe does not mean extreme, dangerous, or violent. It means outlier. A statistic so far removed from the data set yet of such little weight that it's inclusion does nothing except make the math harder.

But followers are increasing "exponentially". It's about to reach "critical mass". Nearly. Any time now.

Szydagis : Addressing the Most Common Criticisms Against Studying UAP