Why we debunk and who do we reach.

There have been other threads started about 'why we debunk' that CTers started in order to cast aspersions about why people would debunk.They do not seem to grasp the idea that there are people that would take the time to dispel falsehoods without someone paying them to do so. I, on the other hand, have always been puzzled why people do not speak up when they hear someone spreading misinformation with the intent to manipulate others. Various members have addressed why they debunk and who they want to reach, in various threads throughout Metabunk.

As for myself, I am bothered by people intentionally (or otherwise) spreading misinformation... I think the best decisions (politically, environmentally, and in every facet of life) for people and humanity in general can only be reached by examining the available evidence, discarding that which is irrelevant or erroneous, and applying reason, rationality and fairness in order to determine what decision should be made.

Who I seek to reach are the people that are open to looking at evidence in forming an opinion. People that get exposed to the emphatic fear-mongering and misinformation from conspiracy promoters, people that don't just jump on the band wagon of hysteria, but instead take the few minutes that are needed to investigate further the counterarguments, who consider the reliability of the various sources and then use reason to reach an opinion.

The good news is that people's efforts to debunk the misinformation circulated by the conspiracy crowd does have a positive effect. These havens of sanity that Mick administers, where the various claims can all be found in one place, along with a reasoned analysis of the claimed evidence is an invaluable resource for anyone with a little time to investigate the claims.

Case in point, here Stacy Weiss and Carly LeBrun try to recruit their Facebook friend, Bill Barnes via Internet Memes and photos that have been spread and debunked of airplane interiors. Bill decides to do his own research, other than what he is being told to rely on.... the result is that he found Contrailscience and posted the link on "How to Debunk Chemtrails" to his own page..... much to the dismay of the conspiracy promoters.

Sorry for the rather long post, but I wanted to show how the chemtrail promoters tried to inundate their friend with bunk, scare-mongering and a large assortment of logical fallacies. I want people to be aware of and to recognize those tactics being used. In this case, to quote W.C. Fields; “If you can't dazzle them with brilliance, baffle them with bullshit.” was the tactic employed by the conspiracy propmoters 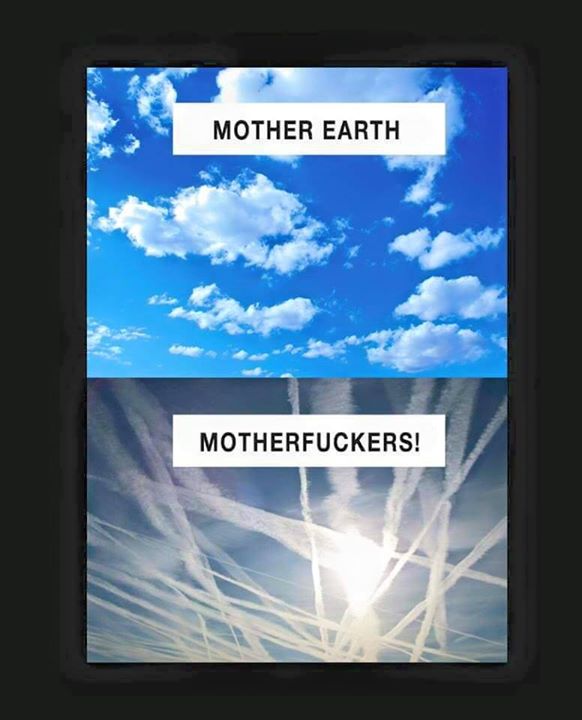 After doing his own research into those rather extraordinary claims being made..... 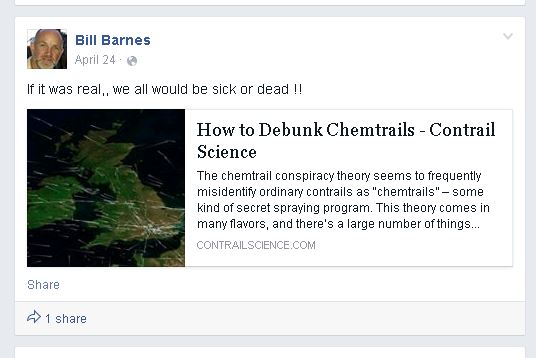 Critical Thinker said:
Who I seek to reach are the people that are open to looking at evidence in forming an opinion. People that get exposed to the emphatic fear-mongering and misinformation from conspiracy promoters, people that don't just jump on the band wagon of hysteria, but instead take the few minutes that are needed to investigate further the counterarguments, who consider the reliability of the various sources and then use reason to reach an opinion.
Click to expand...

Agreed. And this example I think demonstrate there are two distinct types of debunking: discussing and demonstrating.

Discussing would be trying to persuade someone via direct communication - i.e. talking to them, or engaging them on Twitter, Facebook, email, or forum discussions (like here).

Demonstrating would be creating resources for people to use when they go looking for more information. Providing clear information and simple reasoned arguments that they can consider at leisure in a non-confrontational way.

Of course there's overlap here. One an provide sources of information in a discussion, and sometimes a discussion alone can be all that is needed to work out the kinks in reasoning. And discussion are great for understanding the mindset of believers. But I see it in a couple of ways:

Show, don't tell - Focusing on showing them things they can check for themselves, rather than coming across as "My opinion is that you are wrong"

Debunking effort multiplier - Skeptics waste a lot of time debunking. There are several threads here (and I'm guilty of this too) that are just long digressing arguments, often over arcane points that are essentially irrelevant, just raised to win points in a debate. On other forums like the International Skeptics there are multi-part threads with over ten thousand posts. That's a lot of debunking effort that is just whistling in the wind. If instead people took their talents at exposition and analysis and distilled that down into useful articles on a focused aspect of a topic, then you'd have something much more useful. A debunking that could be used again and again.

The above is a good example. I didn't engage Bill Barnes at all. I spent time (a few years ago, that's a 2011 post) writing posts on Contrail Science. Years later he finds that post, and it's useful to him. Contrail Science gets thousands of visitors every month. That's a lot of multiplication of my efforts back from 2011.

I just came across this post in an UK activist anti-fracking group. I'd already unfollowed a similar group last year as it began to get infected with unrelated conspiracy theory promotion and my calls for tighter moderation went unanswered. I'm not the most effective de-bunker (not that I really qualify) but when I get hit with so many posts in such a short time (effectively crapflooding) as I did, I can't respond effectively with the end result that only a small percentage of posts were fracking related and I ended wasting too much time scrolling past them all each day.

I've also suspended/redirected my support of previous other campaigns for similar reasons - which is what actually drove me to contrailscience and subsequently here (as I hope will the last post in this thread ) It was becoming apparent I was drowning in a tsunami of woo and I was at risk of not knowing which way was up! contrail science and metabunk, are I suppose, the lifeboat that rescued me.

Ian Sedwell
1 hr
I'm sorry, there are some fantastic people here, clearly dedicated to the anti-fracking cause. My best wishes to you all.

However, the group is becoming inundated with conspiracy theorists with agendas divergent to what this group is about and it is becoming hard to find the intelligent comment amongst the noise and chatter.

So I have left the group.

Ian BessellI sympathise with you. I've seen many noble and worthwhile causes get infested with these morons, it makes me sick to my ears to watch! They divide groups with their inane bullshit, the good people leave and the conspiratards take over the group like a cancer until the group becomes completely ineffective and dies a death! Then, like the parasites that they are, they re-infest another group with the same end! Admins must keep tight control of any group like this!
"}" class="UFILikeLink">Like · Reply · 1 · 1 hr

Paul AtkinsonYeah and you and your friend are obviously 2 of them save your tearful bull for another site this is a serious issue and lives are at stake nature and humanity !
"}" class="UFILikeLink">Like · Reply · 2 · 1 hr

Ian BessellPaul Atkinson "Chemtrails" are not a serious threat, they are a delusion. And you are the problem.
"}" class="UFILikeLink">Like · Reply · 1 · 1 hr

Paul AtkinsonNo they are not a serious threat , just the reason why alzheimers and dementia are going through the roof . I deliver to 2 nursing homes too . Alzheimers is a killer and is caused by the brain been overloaded with heavy metals like the aluminium peroxide barium and strontium they are spraying in our sky daily . Any other pearls of wisdom ian !
"}" class="UFILikeLink">Like · Reply · 1 · 53 mins · Edited
Hide 13 Replies

Paul AtkinsonYou can put all the debunking crap you want on , just shows you for the troll you are .
"}" class="UFILikeLink">Like · Reply · 48 mins

Paul AtkinsonYou have no argument you cannot back your mouth up you post shit and are not worth wasting energy on .smile emoticon
"}" class="UFILikeLink">Like · Reply · 45 mins

Paul AtkinsonYou posted propaganda bull I will post my pics when I get in alright clown .
"}" class="UFILikeLink">Like · Reply · 28 mins

Ian BessellPaul Atkinson When you post the inevitable pictures of aeroplanes making tracks across the sky,(which doesn't constitute evidence) you'll presumably post the chemical composition of said trails, and provide evidence of how you can tell what they consist of from a picture.
"}" class="UFILikeLink">Like · Reply · 1 · 7 mins

Content from external source
Last edited by a moderator: Jan 9, 2016
You must log in or register to reply here.

Clinton's Flights on Epstein's Plane, the "Lolita Express", did not go to the Island

Related Articles
Debunked: Google Mail icon shows linkage to Freemasons
How to Debunk Flat Earth Without Relying on NASA or Photos
Explained: How Mount Rainier helps demonstrate the shape of the globe
Debunked: 120-mile shot of San Jacinto proves flat earth
Using pin hole lenses to debunk CGI Rebuttals of Photos of Earth Curvature
Does my FE Debunk in this case make sense to you guys?
My eyes deceived me so I had to debunk myself
How can I debunk the orbs in this photo?
How to calculate the visible fraction of the Earth [e.g. 1972 Blue Marble, Apollo 17]
Please help me to debunk this topic: stranges sphere outside of the ISS.
Fireproof Cabbage, Burning Snow, Flat Earth - Are Some Things too Silly to Debunk?
Burying the Debunk: How Fake News about "Pyramids" in Antarctica Creates False Balance
Flat earth Debunk-change in apparent altitude of clouds as seen from airliner
An Easy Experiment to Debunk the Flat Earth by Observing the Size of the Sun
Lets finally debunk Nico and Marco Kaschuba (video hoaxers)
The Solar System.. To Scale (just for fun, nothing to debunk here)
What to do about the Flat Earthers? Debunk, or ignore?
MH370: Help me debunk this
Can someone debunk this George Washington quote?
Some depopulation quotes to debunk?
High altitude clouds don't have a cooling effect
Can someone debunk this? Sandy Hook Shooting 100% Fraud Proof in 2 mins. - Photo Time Analysis
Let's debunk my (very simple) perpetuum mobile
Debunk: The horizon never falling as proof of flat Earth theory
Let's imagine the actual area of the sky, above....
PopSci article claiming to debunk ten GMO myths
Debunk this [Planes at different altitude and different contrails over France]
Gawker article: Why I Write About (and Debunk) the Chemtrail Conspiracy Theory
Debunk NASA is proposing spraying stratospheric aerosols.
Debunk: Chemtrails leave no space between aircraft and the beginning of the trail.
Is there anything about 9/11 left to debunk
Help debunk please!? [Contrail Grids, Weather Modification, Fuel Dumping]
Debunk: Kinder gentler Debunking is better. . . ??
Practical bunk used to debunk
Please Debunk: The Drills (conflicting info from 2 reputable sources)
Debunk This New JFK Information
Should we debunk "hoax" tragedies with "crisis actors"?
Orbs: Something the metaJUNK shills just can't debunk.
There will be widescale rioting after Zimmerman verdict. Debunk, please
Using Campaign Finance Reform to Debunk Conspiracy Theories
please someone debunk this crap
Please Debunk WeatherWar101s "Weather War Big Picture" Video
DOJ investigation of the AP debunk the government controlling the media?
Easy WTC 7 Video to Debunk
Col. Richard French of the USAF States his Job was to Debunk UFOs - Citizen Hearing
Little help to debunk clouds with color
Debunk: imgur: "Boston Truth Revealed"
Debunk: Saudi National Linked
Debunk . . . intuition can save your life or prevent considerable pain and suffering
Can someone debunk Vigilant Citizen?
Share:
Facebook Twitter Reddit Pinterest Tumblr WhatsApp Email Share Link