One thing I find odd, is the retoric I hear that to me makes no sense.

1) It was dark therefor they couldn't see the drones.

Well, NAVY ships have big search lights on them that can light up an aircraft at 30k feet. If there were drones buzzing them at night, they surely would have spotlighted them and taken zoomed in pictures .

And don't the NAVY ships have drones of their own they could have used to check out the mystery drones?

2) They don't have anything to shoot them down, too small

Well they were supposedly 6 foot across if you believe Corbell (Yeah I know). In any event, the destroyers have machine guns and gattling guns they use to fire at close in threats. Some of these machine guns are used to shoot missiles traveling at high speed. They would make mince meat out of a 6 foot drone. Not that they are needed to shoot down a drone hovering near the ship, even farmers are able to shoot tiny DJI drones with rifles. I'm sure they have better sniper type rifles on the NAVY ships

Just two curious things I see repeated that to me, make no sense
Last edited: Jun 1, 2021

However it's not wise to shoot at things that you don't know what they are during a peacetime operation. That's how airliners get accidentally downed.
A

This question comes up often. Using any sort of ordinance outside of combat is highly controlled. Shooting at an unidentified target outside of combat just isn't something that happens for very obvious reasons. Also, encounters between foreign jets, ships, etc. really aren't uncommon. You can find plenty of videos of Russian jets "buzzing" ships and you can be assured most countries engage in the same sort of theatrics. Not a good idea to shoot at stuff willy nilly.

Some more info from Dave Beaty. Apparently the USS Kidd had fired SM2's and chaff on the day of the 14th July 2019. Below is a video of this, you can see it was getting very foggy
The night of the 14th was when they encountered UNID drones 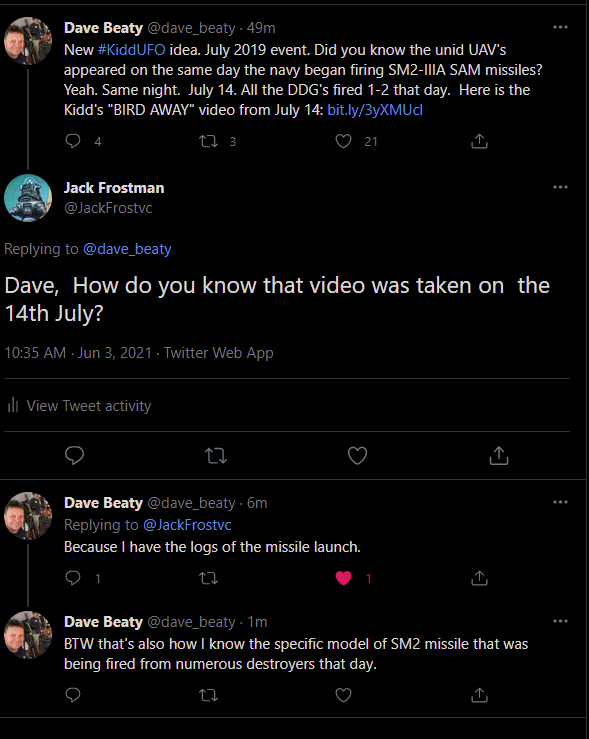 Also this courtesy of Dave Beaty on twitter.
Table of deck log events, showing bird away and low viz on the 14th reUSS Kidd

I've poste this before, but here is one type of targeting drone they fire from San Clemente Island

Some more news about that drone base on San Clemente Island I had posted a while ago, 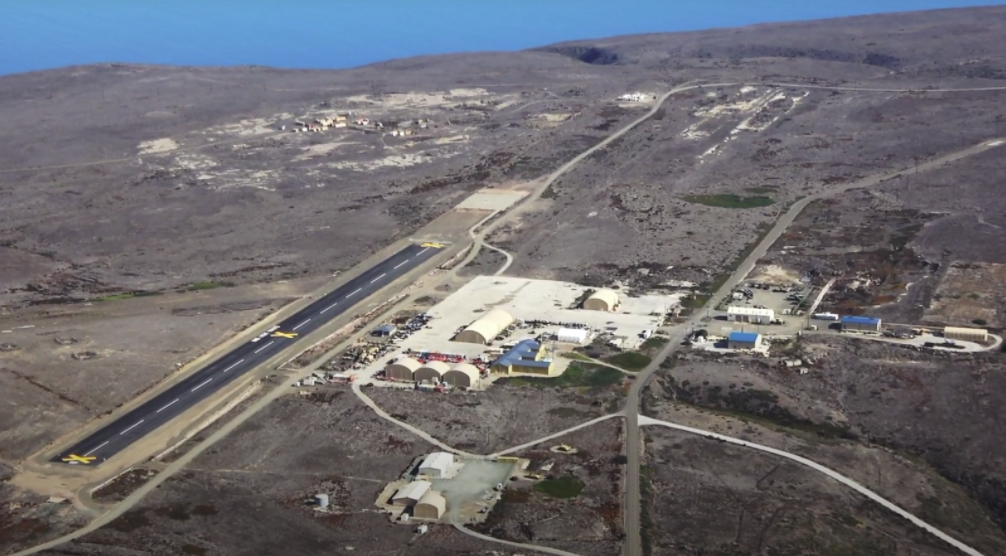 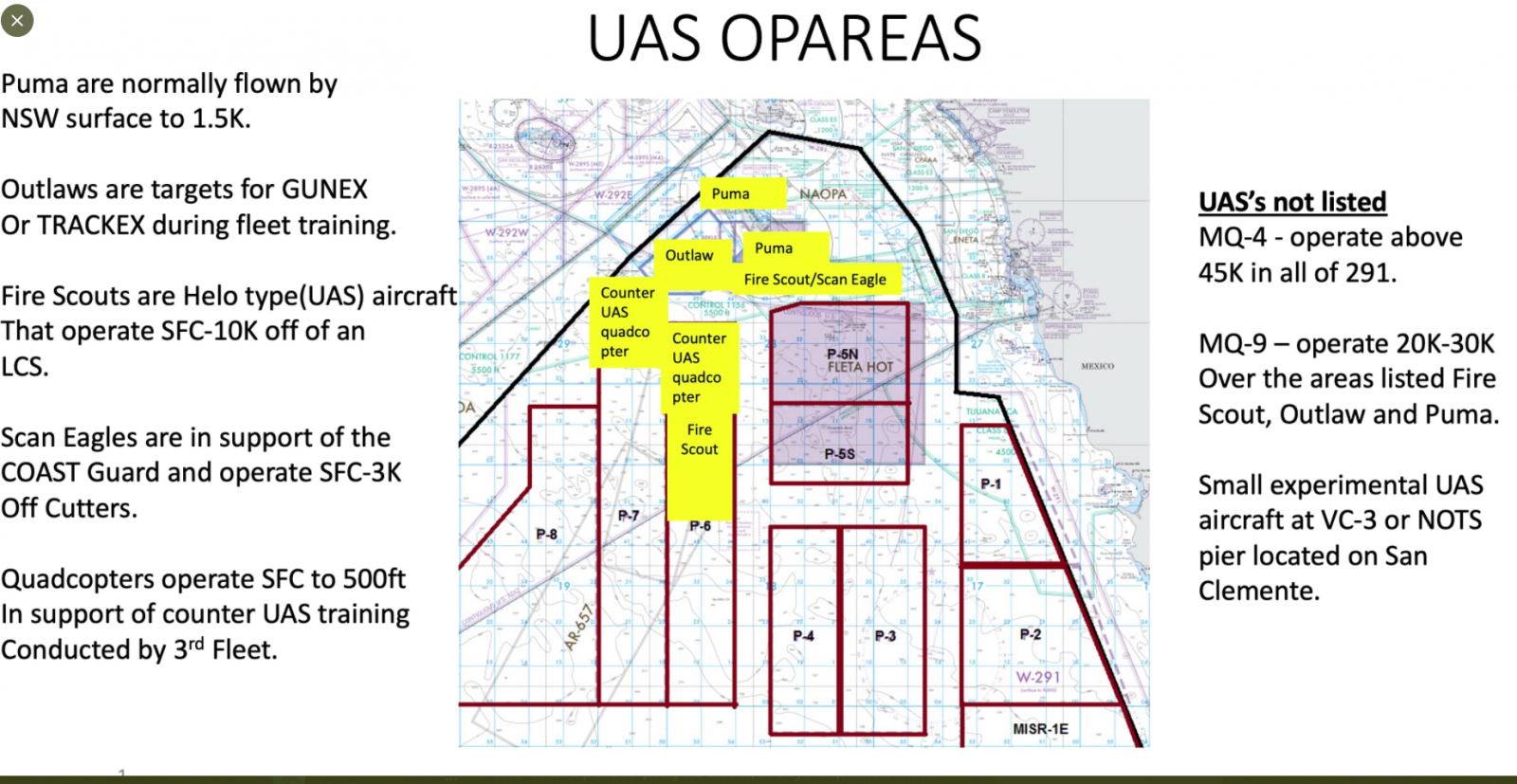 I don't think anyone has ever questioned whether or not San Clemente is used to launch aircraft. Is your contention that the USS Kidd situation can be explained by friendly, yet unidentified for some reason, drones?

Alphadunk said:
I don't think anyone has ever questioned whether or not San Clemente is used to launch aircraft. Is your contention that the USS Kidd situation can be explained by friendly, yet unidentified for some reason, drones?
Click to expand...

US experimental drones they were testing is a possibility for the drones seen. The other option is foreign drones.


But I think the sightings overall are a little more complex than that. For example the triangle video seems to be bokeh of a commercial airliner
They were also doing training exercises. For example it is now known that on that day of the 14th, the USS Kidd was firing missiles, not that it explains any of the sightings, just that stuff was going on.
V

Building a remotely or autonomously controlled fixed wing drone with many hours of endurance is completely trivial even with hobby grade stuff. I made one. Less than 2 meter wing span, tiny coke can sized battery, but ~3 hours of endurance without really trying. If you where to replace the battery with a small gasoline engine, endurance could be many times higher.

Autopilot with long range telemetry/control link is just off the shelve and dirt cheap. With some directional antenna's telemetry/control range is basically unlimited if you have line of sight; getting a live video feed at extreme range is more challenging but hobbyists can achieve more than 100Km with just off the shelve gear and 1W analog transmitters that cost a few tens of dollars. Random youtube link from 6 years ago:
Source: https://www.youtube.com/watch?v=cr3REkK-Ep8

(edit: maybe not the best example, as his FPV camera died, that white screen in the second half has nothing to do with the range of his equipment. The HUD is rendered on the plane and then transmitted as video, so if there is a HUD visible, he had a working video link)

I have flown my "drone" over sea and flew it over ships, because its just beautiful to look at. Not many warships where I live, and I would be less keen flying over those for various reasons, but Im very sure others wouldnt have the reservations I have, and I would lie if I said the idea didnt appeal to me. I do not know how military radars would affect my drone, but I have noticed no meaningful interference from commercial ship radars. Also worth pointing out that my plane, like most similar ones, is mostly made out of EPO foam and that would be completely invisible to radar. Only the battery would produce a meaningful radar return, and maybe the (finger thick) carbon spars at certain angles, but you can use wood or fiberglass too. A combustion engine drone would be even harder to see on radar I think, those motors are metal but roughly the size of a golfbal.

As for hovering; my drone can fly slower than 30KmH, which is probably not far off the cruising speed of warships. It would be easy to appear to be hovering over it, without even factoring in any headwinds.

You can also buy off the shelve long range VTOL drones, like this one :
https://shop.righthere.nu/rov-uav-uas-fpv-platforms/-mfd-1900-crosswind-vtol-test.html
which blends a fixed wing and multirotor in to one. It can take off and land vertically, or hover as it is a multirotor, while maintaining most of the efficiency of a fixed wing while cruising. Hobbyists have been making their own for at least a decade, I built one from scratch almost 15 years ago, though there is absolutely no need for this if your goal is "hovering" over a naval battle group.

One last thought; a hobby drone like that would be emitting RF signals, and if I can pick them up at 100+Km, I can only a assume a naval battle group can too. But I have no idea what frequencies they monitor. For telemetry and control, off the shelve drones usually use 2.4 GHz frequency hopping, but long range FPV enthusiasts more typically use 433 or 868 Mhz on fixed frequencies. Same frequency your garage door opener probably uses. Transmit power on the plane is on the order of 100mW and omnidirectional. For long range (analog) video, 1.2GHz is popular, but other frequencies are used too. TX power is typically 100 to 1000mW and again omnidirectional although its not too hard to put a high gain antenna on a gimbal and have it point to the receiver home and some people have done this.

Hobbyist gear doesnt use any encryption or frequency hopping (aside from 2.4 Ghz), it would be trivial for a warship to listen in on its emissions and even render the live video feed and reconstruct the telemetry data. Even any other hobbyist with compatible gear can listen in by selecting the right channel. Is the navy doing this? No idea, but they should. Not just on warships, in any potential conflict zone the military would probably want to know if a drone, even a hobby drone, is nearby or overhead which is why i would assume they do this. (Then again, I never heard of them complaining of civilian drones being detected nearby and I have not heard of this being used near airports -civilian or military- even when there where visual spottings. )

If I where to do this, if I wanted to capture some video of warship using my drone, I would want to avoid being caught and I would disable both and just a set up an autonomous waypoint mission and not transmit any video or telemetry. Thats assuming I somehow knew where those ships where. More likely i would use both until I found the ships, then i would set up a waypoint mission overhead and "return to home" (using GPS and compass, which are passive), turning off all RF emissions to reduce the odds of being tracked home and getting a knock on the door.

If i had any more skills and budget, and I wanted to do it "properly", Id add some intelligence to the drone to detect ships autonomously without requiring a live video feed or telemetry link. I think this is out of reach of 95% of hobbyists, but for a state actor or even a commercial entity, this should be easy, fly a grid, find ships using visual or infrared, or just homing in on radar emissions and then go take some video or collect other data. I wouldnt be surprised if there are commercial solutions for this available for search and rescue and other purposes.
Last edited: Thursday at 6:48 AM
You must log in or register to reply here.