http://www.zerohedge.com/news/2014-...oving-rebels-shot-down-malaysian-flight-mh-17
In the clip, Ukraine presents what it alleges are several recorded conversations, first of all between a pro-Russian separatist and his coordinator Vasyl Geranin, who is said to be a colonel of the Main Intelligence Directorate of the General Staff of the Russian Armed Forces. In summary, this conversation talks about the downing of a jet. There is no distinction whether this is a civilian or a military jet, and may well refer to the shot down Ukrainian Su-25 which we reported earlier today was shot down overnight, and which Ukraine at first claimed had been shot down by a Russian warplane, something which Russia promptly denied hours later (and before the Malaysian Airline tragedy happened).

The purported smoking gun is "revealed" in the second section which begins 43 seconds and lasting one minute in between a "Major" and "Grek" who are also allegedly Russian rebels. It is here that the conversation goes into explicit detail describing the contents of the downed airplane, and makes it clear that it is a civilian airplane, describing the civilian carnage, and stopping just why of naming this a Malaysian Airlines flight.

There are several issues highlighted in the article, listed for metabunking as follows:

First, the Russian version of the clip which was released in parallel, and shown below, there is a major discrepancy in the time stamp, with the English-dubbed version showing the conversation between Major and Grek taking place at 5:11 pm and 5:32 pm, while the original one has it at 4:33 pm, 5:14 pm and 5:32 pm.

Then there is what gmorder has revealed is either a clearly erroneous creation timestamp, or the video was actually uploaded yesterday. 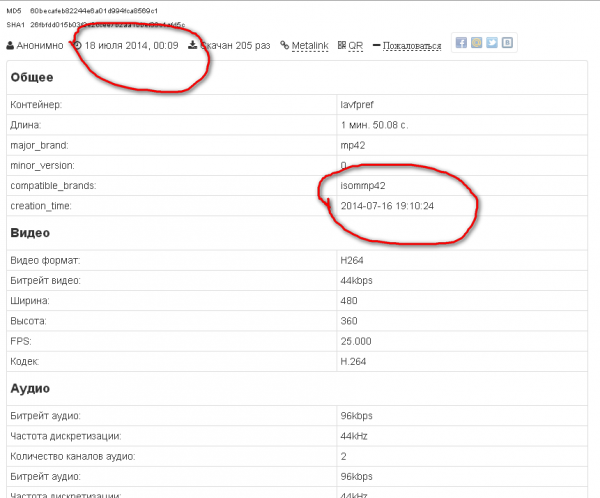 The article goes on to compare this video to a prior June 5 video produced also by the Ukrainian government and highlights the near identical production quality and placement of captions, layout of dubbing. Zero Hedge implies that the second two videos, like the June 5 one, were produced and uploaded by the new Ukraine government.

The fact it was uploaded by the Ukrainian government was never an issue was it? They were the ones who intercepted the audio and uploaded it, so what's the issue it has the same format as previous ones?

Timestamps are wrong all the time.

Pete Tar said:
Timestamps are wrong all the time.
Click to expand...

Do you have any evidence that the timestamps are wrong this time?

Well there's a demonstration of how timestamps are not indicative of when a video was uploaded here...
http://www.militaryphotos.net/forum...hread&p=7284980&viewfull=1#post7284980 <br />

Here's a post showing Obama made a speech about the crash before it happened.
http://www.militaryphotos.net/forum...thurt-thread&p=7285000&viewfull=1#post7285000

Do you have any evidence the video was created and uploaded before the incident took place?
Is that really what someone intending to frame someone would do, present the incriminating evidence before the crime has happened?

Pete Tar said:
Do you have any evidence the video was created and uploaded before the incident took place?
Is that really what someone intending to frame someone would do, present the incriminating evidence before the crime has happened?
Click to expand...

There is evidence in the OP that this video was created before the incident.

This is conjecture, but if it was created in advance, perhaps it was done in preparation such that it could be uploaded after the incident to assist in the subsequent investigation.

I tend to dismiss sources that are loaded with hyperbole:


...and which now are fighting across the border with another former US-puppet state, Iraq

Or is this merely yet another false flag provocation from the same "masterminds" that tried to launch another world war to benefit a few billionaire Qatari emirs with nothing but a YouTube clip in the summer of 2013?

The fact that the two cited youtubes had similar production value is not a smoking gun since they both came out of the Ukrainian security authorities.

Really though, do you have any proof upon which to base a dismissal of the evidence in the OP?

Why are you ignoring that timestamps of uploads to youtube are demonstrably wrong all the time? Isn't that evidence that refutes the claim?
How about you do an experiment - record a video of something that can serve as an objective time reference, (a news broadcast?), upload and compare the youtube timestamp with the time you know you made it.
It should be probably be done in a few different timezones from where the youtube servers are located to be thorough.

Libertarian said:
You haven't refuted the OP with any evidence.
Click to expand...

There is no way to prove a timestamp is incorrect (proving a negative problem). However, incorrect time settings on computers occur very frequently - probably more so within security organizations that are likely disconnected from the Internet and time servers. I would also expect that a national security apparatus that was perpetrating a "false flag" would get the time stamps correct.

The dilemma Putin finds himself in is that there are pictures and videos of the BUK's and there are, no doubt, witnesses loyal to Ukraine that saw the launch and crash. In addition, the separatists are restricting access to the area to international investigators - why do that if an investigation would prove it was shot down by Ukraine? More likely to allow time for the wreckage to be sanitized and limit access to witnesses.

Libertarian said:
If you dismiss hyperbole you must dismiss pretty much all news
Click to expand...

I don't know if this is mentioned in other threads, but I found an article about how youtube assigns dates to videos.


As YouTube has previously confirmed to The Lede, its computers automatically assign a date to each video based on the current time in California when the upload begins, which can differ from the date in the user’s time zone. Given that California is 10 hours behind Syria, that means that any clip uploaded to YouTube before 10 a.m. on Wednesday was stamped with Tuesday’s date.

Time stamps are not evidence. See following where journalist contacted one of the separatists in the conversation. Look at the part "So I decided to pull out a Colombo, and called “Grek” again."

No doubt this one will be doing the rounds soon? The time stamp indicates that the video was made the day before the MH17 tragedy.