tadaaa said:
my wife showed me a Donald Trump meme that came up on her facebook feed this evening

This is an old meme that has been debunked all over the internet, but since it might make a new showing due to recent events figure i'll add some links and background.


We scoured the Peoplemagazine archives and found nothing like this quote in 1998 or any other year.

And a public relations representative with People told us that the magazine couldn’t find anything like that quote in its archives, either. People‘s Julie Farin said in an email: “Peoplelooked into this exhaustively when it first surfaced back in Oct. We combed through every Trump story in our archive. We couldn’t find anything remotely like this quote –and no interview at all in 1998.” http://www.factcheck.org/2015/11/bogus-meme-targets-trump/ 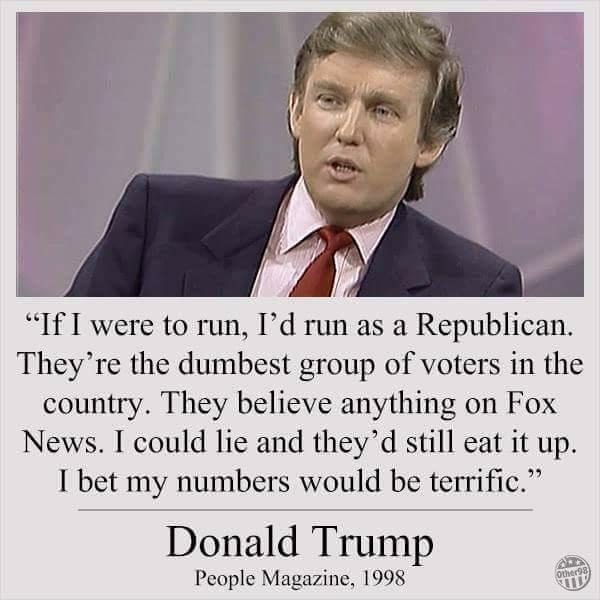 just for the record the People Magazine (which is the meme) "interview" is the one where he said he'd have Oprah Winfrey as VP.. remember that..lol.. a blast from the past, but it wasnt a People Magazine interview, People just quoted CNN.


Donald Trump declared Thursday he is moving toward a run for the U.S. presidency. “I will be forming a presidential exploratory committee,” Trump, 53, said on CNN’s “Larry King Live.” The New York real estate developer and New Jersey casino owner said his top choice as a running mate would be Oprah Winfrey. “She is terrific, ” he said. A Winfrey spokesperson said she is not interested. Trump, who claims he’ll pay his own campaign expenses, had dinner with Minnesota Gov. Jesse Ventura Thursday. Ventura, leader of the Reform Party, has been recruiting Trump for months to seek his party’s nomination
http://people.com/celebrity/the-donald-i-do-declare/

Content from external source
He was a Republlican but thinking of running for the Reform Party, after Jesse Ventura asked him .. this was [right after] Perot, the American Business man who ran.


Can a Reform Party candidate win? Because I believe I could get the Reform Party nomination. I don't even think it would be that tough. It's going to be Buchanan, and I think Buchanan just blew himself out with the book and his love affair with Adolf Hitler. I mean, you know, how he said this is beyond believe.

But I really want to see, if you get that nomination, what happens from there? If I couldn't win, if I felt I couldn't win, I wouldn't run. I absolutely would not run. I'm not looking to get more votes than any other independent candidate in history, I'd want to win. So we'll see.
http://www.cnn.com/ALLPOLITICS/stories/1999/10/08/trump.transcript/

The Other 98% is a grassroots network of folks committed to kicking greedy corporate asses for the harder working classes. And we have fun doing it. http://other98.com/about-us/

tadaaa said:
my wife showed me a Donald Trump meme that came up on her facebook feed this evening

I saw a video clip of something similar to that last night.
You must log in or register to reply here.