Dutchsinse has repeatedly claimed that work highlighted by The Weather Channel demonstrated the creation of a tornado via microwave heating in a controlled laboratory setting.

He has claimed this as recently as March 6, 2014 on Facebook:


That video is a direct ripoff of footage from the Weather Channel production "Hacking the Planet". In that video a mechanical engineer that works in veterinary orthopedics, Dr. Slobodan Tepic, hypothesizes that one could use microwaves to heat a column of air and create a stationary vortex with the inflowing air at the bottom being used to spin a turbine and create electricity. He had created an experiment wherein a LASER was beamed through a jar of water at a metal plate at the top of the water. According to the video the plate was to represent the upper atmosphere and heating the plate with a laser would be like heating the upper atmosphere with microwaves. The plate did warm slightly and no vortex was created in the jar. Of course if you want to induce buoyancy driven convection then you probably want to heat the bottom and cool the top. The Weather Channel had to insert a graphic to demonstrate what it would look like IF the experiment had generated a vortex since the experiment fails.

Dutchsinse claimed and still claims that failure as "proof of concept" of creating tornadoes in nature using microwaves.

Tim Solrey already covered this in another thread but I felt like Dutch's repetition of this bunk deserved its own thread.

Maybe Dutchsinse himself deserves his own thread. He's been very busy lately. He's seeing 1/4 circular anomalies that apparently qualify as HAARP Rings too now. He's upped his time frame to a full 96 hours now for weather events following his "HAARP rings". He's seeing chemtrails and cloud seeding on radar. And he's using videos such as this and that bunk on "Unsealed Conspiracy Files" as "proof".......

ssfor27 said:
Maybe Dutchsinse himself deserves his own thread.
Click to expand...

Dutch sticking to his claim as of June 9.

No Dutch, we've simply been installing software update 14.0 and 14.1. One of the improvements of this build that it mostly eliminates the known and thoroughly documented sunrise/sunset spikes. Oh, other anomalies will continue to appear from time to time, including other interference "spikes" caused by non-solar sources of energy. But sadly my lad, you and WeatherWar101 will soon have lost one of your most favorite toys to play with. As soon as every office installs it, of course. So until then enjoy what few sunrise/sunset spikes you have left to shoehorn into your fantasy land "forecasts". And no more "NEXRAD Nightly Ionization Cycle" for WW101.

It almost appears like Dutch is taking me up my previous post in which I told him to enjoy his last few solar spikes. Though the links he provided are no longer current and will not show what he was referring to, basically the imagery he linked to showed the evening and morning solar spikes cutting a "swath" through precipitation events that were happening in the areas. The rest was left up to the imagination of his viewers and he never explained to them what they were supposed to be seeing.

Not coincidentally, every site he linked to had not, as of 6/11, completed the recent software build that mostly eliminates the solar spikes. 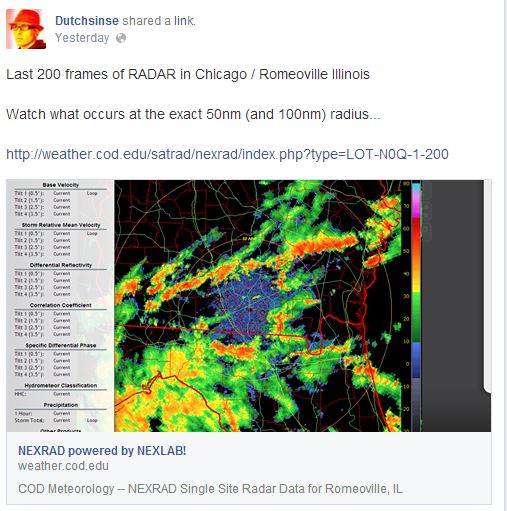 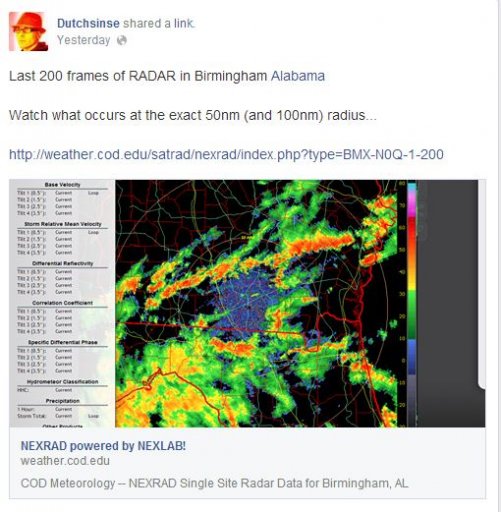 Screenshot of how radial to radial noise estimation, one of the new features of the latest build, will most remove solar spikes and some of the other types of interference, which are frequently called "pulses" by Dutchsinse and others. But to be clear there will always be anomalies of some sort due to any number of factors, and the solar spikes will continue to be seen at various locations until each office has completed the new build.

But we're just covering things up because Dutch is on to us...... 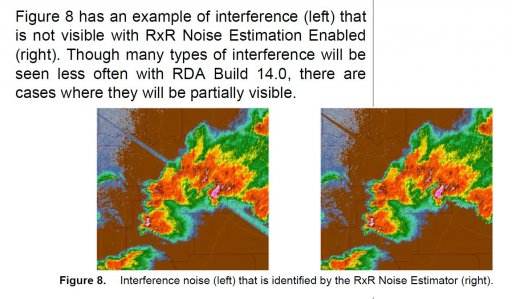 Who's tuning in? I GOTTA hear this. Wonder if it will have to do with microwaves.......

Do you even know what a TDWR is Dutch? Or why they are typically located near airports? 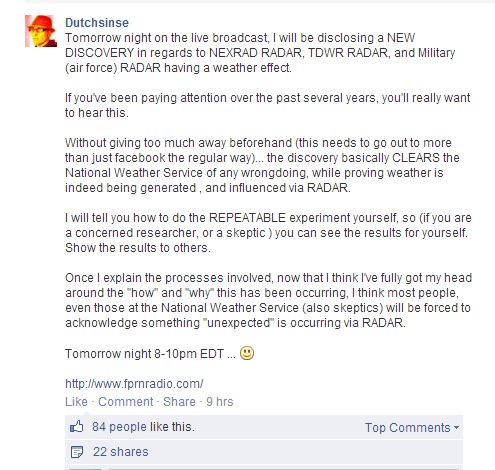 ssfor27 said:
Who's tuning in? I GOTTA hear this. Wonder if it will have to do with microwaves.......

Do you even know what a TDWR is Dutch? Or why they are typically located near airports?

Nothing but 10 minutes of hair brained drivel, going back to his "crossing of the frequencies" folly from the past. He claims that wherever you have at least 2, sometimes 3, WSR-88 radar sites located in close proximity, storms will always form at the "intersecting 50 and 100 nautical mile rings".....and once the storms are formed, you can tell which radar is "most powerful" because it will pull the newly formed storms towards it as it "pulses"....... he says we (the NWS) are just now learning that when we "cross frequencies" it's creating a "scalar resonance frequency"....and it's an experiment that YOU too can try right at home. Pick any 2 or 3 sites that are close to one another and display them side by side. Then sit back and watch the storms pop up where the "beams cross".

Oh and he wishes he had never discovered any of this........

And he continued on basically with a woe is me campaign about how he is putting himself on the line to get this info out there and that nobody is listening or taking note so he is scaling back for a bit and shutting down the freedom frequency show on Fridays.
You must log in or register to reply here.

Chemtrails: Experiments on the Public