Clearly, this document above states that experiments have ALREADY been done using S-Band RADAR — (same type as NEXRAD) to produce actual lightning, ionospheric heating, atmospheric heating, and (in other papers I’ve recently found ) even moisture propagation/condensation.
Click to expand...

Here's a link to the paper:

In typical dutchsinse fashion he has done nothing but look at the pretty pictures and made up a story. The paper is actually about simply using s-band radar to STUDY lightning, not create it. The diagrams he thinks prove radar is creating lightning are actually depicting the geometry of radar backscatter off the narrow cylinder of plasma that is the discharge channel of a lightning strike. The paper describes radar backscatter/skip off of plasma in general. Nowhere in the document does it even elude to radar being used to create lightning, or plasma. The paper also simply describes skipping radar signals off a patch of plasma in the ionosphere enhanced by an ionospheric heater.

Reflection of radio waves from turbulent plasma layers was investigated with potential applications to radio communications and space surveillance.
[..]
The lightning plasma is modelled as a cylinder of ionized gas (see Figure 3) that is overdense, or perfectly reflecting, to the radio frequencies in our cxperiments.
Click to expand...

He uses this set of diagrams from the paper as "evidence", however nowhere in the paper does it mention RADAR used to induce lightning. In this case dutch is being flat out deceptive. 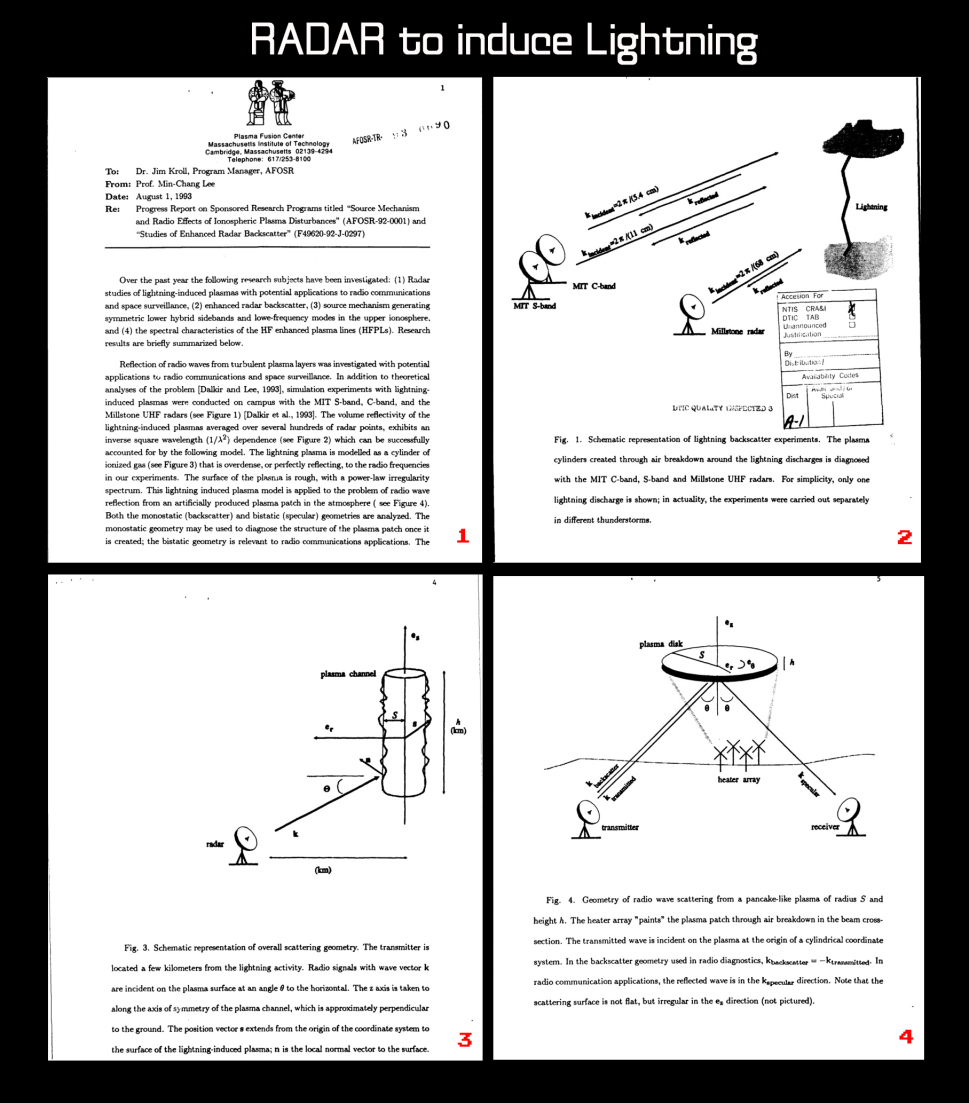 However the caption for the top right diagram states:

Fig. 1. Schematic representation of lightning backscatter experiments. The plasma cylinders created through air breakdown around the lightning discharges is diagnosed with the MIT C-band, S-band and Millstone UHF radars. For simplicity, only one lightning discharge is shown; in actuality, the experiments were carried out separately in different thunderstorms.
Click to expand...

And the bottom right diagram:

Fig. 4. Geometry of radio wave scattering from a pancake-like plasma...
Click to expand...

Dutch interprets the following as meaning that radar is creating lightning and plasma, but nothing could be farther from reality. The paper reads:

It simply means that radar is used to study the plasma that's created along the discharge path of natural, thunderstorm induced lightning. The radar works because the signal just bounces right off the plasma in the lightning channel... that's it.

Really all one has to do is sit back and watch dutch debunk himself with his own "evidence".
Last edited by a moderator: Nov 20, 2013
U

I think I have a basic understanding of what you are trying to say.
Dose the following link shed any light on the situation?

Unregistered, we address that NRL experiment starting at the following post.