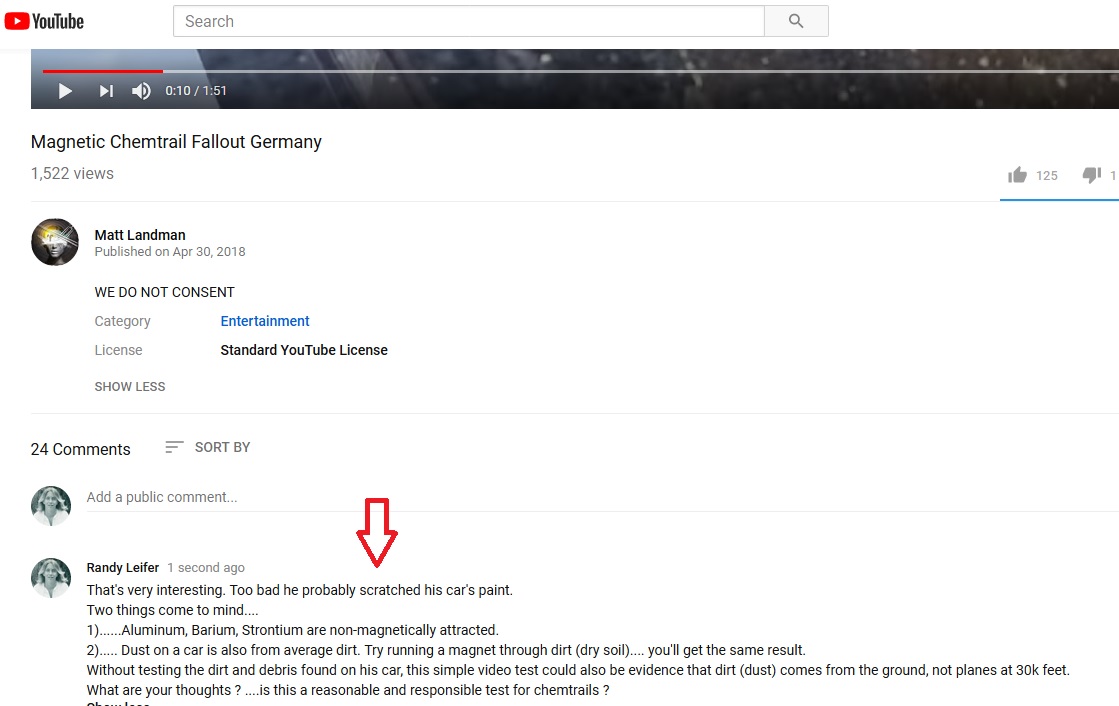 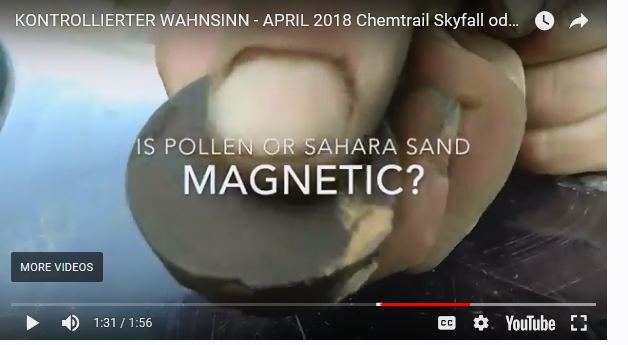 One reason I can imagine, is that these areas have iron dust that settles on vehicles, and that finer dust (like sticky pollen, etc, ) get attached to the iron. That means the pollen or whatever, also ends-up on the magnet because the pollen or other dust debris is clinging to the iron, for non-magnetic reasons.
Last edited by a moderator: Jun 24, 2018

Europe often gets dust from the Sahara, but this Spring was extraordinary. Beyond just fine dust there was actual sand. I used to pull "black sand" (magnetite) out of our sandbox with a magnet as a kid. Not to mention all the black sand I've seen in gold pans, placer mining in California rivers.

But in this case I think this is hematite coated quartz sand: Hematitic sand. It's weakly magnetic and people are just playing with it.

Hematite (Fe2O3) is an iron oxide mineral. It is widespread in nature, especially in sedimentary environments. Hematite is one of the two principal iron ores. The other is magnetite, which is also an iron oxide mineral. The term ‘hematite’ itself might not be familiar to everyone, but its rusty red color definitely is. Sandstones are often reddish. This is because sand grains are coated with fine-grained hematitic powder. If soil is reddish, then it is also because of hematite. Even red granite owes its color to this mineral. Iron rust itself is similarly colored, but it is mostly composed of hydrated iron oxides.

Sand with hematitic pigment
Hematitic sand and sandstones are mainly consisting of quartz but these quartz grains have an intense pink, orange or red color. The coloring agent in this sand is volumetrically insignificant – it is hematite (oxide of iron) that forms very thin rust-colored pigment on larger silicate grains.

However, its influence on the appearance of sand or sandstone is very strong. A well-known example of such sand is the Coral Pink Sand Dunes in the State of Utah, USA. Devonian sandstones (Old Red) in many places are often even darker (brick red). These sandstone formations are known throughout the world as “red beds”.

Hematite is not a detrital mineral (formed as a result of disintegration of a parent rock) in this sand type. It is mainly groundwater that carries iron and forms ferric gel on silicate grains. Complete dewatering of such gel results in a thin layer of iron oxide. Hematitic sand is very common in deserts.

Sand dunes in [the] Sahara are not gray or white as one would expect pure quartz sand to be. Instead they are orange. This color is a combination of white quartz and reddish hematite.

People in eastern Europe have been wondering at the appearance of orange-tinted snow.

The normally white-capped mountains of Eastern Europe have become the color of rust.

Desert winds from the Sahara are to blame, sweeping dust north over the Mediterranean Sea into Russia, Bulgaria, Ukraine, Romania and Moldova. The dust was brought to the ground by rain and snow Friday into the weekend.

The deposits on the ski slopes in Sochi, Russia, host of the 2014 Winter Games, were likened to sandy beaches and the surface of Mars.

The dusty plume in the air streaking from North Africa to Eastern Europe was readily apparent in weather satellite imagery.


While orange snow seems unearthly, meteorologists said the phenomenon occurs about every five years and that this instance was caused by sand from storms in the Sahara mixing with snow and rain, according to the BBC.

Unlike past occurrences, however, the concentrations of sand are much higher this time, with people even complaining of getting it in their mouths, the BBC reported.

Even an amateur placer miner has to deal with pounds of magnetite. It's a real chore separating black sand from the gold, and there have always been black sand contraptions. The author of this video is demonstrating a modern magnetic contraption.


I think this contraption would pull orange hematitic sand out of soil in Europe. There must be a lot that's been deposited over the years. But probably less actively because the orange sand isn't as strongly magnetic as black sand.
Last edited: Jun 24, 2018

Scratching with a plastic card over lacquer, the stuff gets statically charged. That's all.

Surprising what one can mine from road dust. Platinum!
Source: https://www.youtube.com/watch?v=v5GPWJPLcHg

Finally, an experiment we can all try at home. (Lol)
But how can we eliminate pollen or unrelated common dust from metalic iron particles ? Perhaps by washing them to seperate them in a non-water solution (to prevent rusting/oxidation).
I wish I were a chemist.

We present a review of the magnetic properties of NE Saharan dust that was conducted, following a source-to-sink approach, to unravel the paleoclimatic significance of environmental magnetic records from Eastern Mediterranean marine sediments. Our synthesis indicates that pedogenic hematite, which formed during past wetter Green Sahara periods (GSPs), is the most common magnetic mineral in Eastern Mediterranean marine sediments as a result of its eolian transportation, along with smaller amounts of lithogenic hematite, from the NE Sahara.

Leifer said:
But how can we eliminate pollen or unrelated common dust from metalic iron particles ?
Click to expand...

This is especially nonsensical. Chemtrail planes are supposed to have blanketed all of Europe from Great Britain to Russia? One hell of a fleet of chemtrail planes. And whatever it is that chemtrail stuff is supposed to do, why hasn't it done it with that kind of massive deposit?

Have you noticed a tan or orange tint to the snow this morning? If so, the color is likely due to dust that was blown by high winds all the way from west Texas. Here's a satellite image from yesterday (Wednesday) showing the blowing dust in west Texas heading northeast.