I came across this on a few FB chemtrail pages 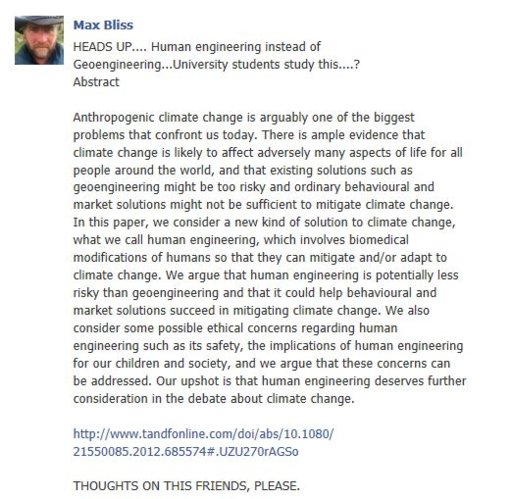 Max makes reference to an article that was presented in a journal called Ethics, Policy and the Environment in 2012

Far from studying human engineering it is a philosophical thought piece designed to generate discussion, and the authors go to the lengths to place a disclaimer.


To be clear, we shall not argue that human engineering ought to be adopted; such a claim would require far more exposition and argument than we have space for here. Our central aim here is to show that human engineering deserves consideration alongside other solutions in the debate about how to solve the problem of climate change. Also, as we envisage it, human engineering would be a voluntary activity – possibly supported by incentives such as tax breaks or sponsored health care – rather than a coerced, mandatory activity.

At the time of publishing it did court some controversy and the authors did receive some abuse, but that is the nature of philosophical inquiry I suppose. There is an elightening article with the authors here.

As to the content of the article it is all pretty tame. There are no recommendations to engineer webbed feet or gills or even to grow ape like hair to keep us warm. Most of the ideas are non invasive pharmacological ideas to adjust behaviours.


The modifications discussed included: giving people drugs to make them have an adverse reaction to eating meat; making humans smaller via gene imprinting and "preimplantation genetic diagnosis"; lowering birth-rates through "cognitive enhancement"; genetically engineering eyesight to work better in the dark to help reduce the need for lighting; and the "pharmacological enhancement of altruism and empathy" to engender a better "correlation" with environmental problems.

Some of the ideas do hold some merit but that is a long way off from been studied and accepted as Plan C to counter climate change. I do have an interest in ethics especially debating the more out there ideas and to be frank this is not that bizarre or offensive. Around the same time I read an article about post birth abortion and the nature of when an infant becomes a person. http://jme.bmj.com/content/early/2012/03/01/medethics-2011-100411.full Ethics journals are of controversial and extreme articles.
You must log in or register to reply here.

What evidence of aliens would convince skeptics?
2 3