With millions of Texas residents still without power amid frigid temperatures, conservative commentators have falsely claimed that wind turbines and solar energy were primarily to blame.

“This is a perfect example of the need for reliable energy sources like natural gas & coal,” tweeted U.S. Sen. Steve Daines, a Republican from Montana, on Tuesday.

In reality, failures in natural gas, coal, and nuclear energy systems were responsible for nearly twice as many outages as frozen wind turbines and solar panels, the Electric Reliability Council of Texas, which operates the state’s power grid, said in a press conference Tuesday.

The situation is still ongoing, and very serious, with people dying from the cold and from carbon monoxide poisoning as they try to stay warm. As with any serious situation in the news, conspiracy theories will arise.

The mainstream media is doing a good job in explaining the disinformation regarding overreliance on renewables being the cause (it's mostly natural gas) - but we should expect such disinformation to persist amongst people who have limited and inaccurate information sources. There will be also more obscure and extreme theories, such as the crisis being deliberately manufactured (even to the extent of creating the weather conditions).

But planning for this winter didn’t imagine temperatures cold enough to freeze natural gas supply lines and stop wind turbines from spinning. By Wednesday, 46,000 megawatts of power were offline statewide — 28,000 from natural gas, coal and nuclear plants and 18,000 from wind and solar, according to the Electric Reliability Council of Texas, which operates the state’s power grid.

“Every one of our sources of power supply underperformed,” Daniel Cohan, an associate professor of civil and environmental engineering at Rice University in Houston, tweeted. “Every one of them is vulnerable to extreme weather and climate events in different ways. None of them were adequately weatherized or prepared for a full realm of weather and conditions.”

The full article is a great explanation of the situation. It does include a plausible conspiracy theory:

That raised questions whether some power generators who buy in the wholesale market may have had a profit motive to avoid buying more natural gas and simply shut down instead.

This seems quite plausible, as your costs going to 450x what they were last week could be financially crippling. The prices are so high as there's an unregulated market, and the utilities are contractually obligated to buy power regardless of cost. Of course it's likely illegal for them to shut down instead. So they would have to illegally conspire to do so.

This is somewhat reminiscent of the Enron affair after market deregulation in California.


After passage of the deregulation law, California had a total of 38 Stage 3 rolling blackouts declared, until federal regulators intervened during June 2001.[58] These blackouts occurred as a result of a poorly designed market system that was manipulated by traders and marketers, as well as from poor state management and regulatory oversight. Subsequently, Enron traders were revealed as intentionally encouraging the removal of power from the market during California's energy crisis by encouraging suppliers to shut down plants to perform unnecessary maintenance, as documented in recordings made at the time.[59][60] These acts contributed to the need for rolling blackouts, which adversely affected many businesses dependent upon a reliable supply of electricity, and inconvenienced a large number of retail customers. This scattered supply increased the price, and Enron traders were thus able to sell power at premium prices, sometimes up to a factor of 20x its normal peak value.

Enron's Califonia actions are a classic example of a real and significant conspiracy - one that I cite in the first paragraph of the introduction to my book. Given the public anger in Texas right now, it seems possible that similar things may be revealed in subsequent investigations.

i read the same thing happened a decade ago and once before that. but both times the outages only lasted like 4 or 5 hours, so the issues they knew existed with their power system were basically ignored. I wonder if they even had turbines back then. hhmmm...


Moreover, some of the same equipment, the [2011] report noted, had failed during previous cold snaps. One in December 1989 prompted the state’s grid operator to resort to system-wide rolling blackouts for the first time.

one resident in the article even said (paraphrase) "I'd rather suffer these rare occurrences then have our electric prices double". which is a fair point. except i also heard water issues are affecting people who can't get dialysis etc. (apparently you need water pressure for dialysis).

as far as the wind turbines (which might be mentioned in one of your articles), apparently there is a de-icing kit they could have bought but they didn't. even in the North East we know you need winterizing kits for your generators or they might not start for you.

Horrible situation for the people of Texas.
Last edited: Feb 18, 2021

This wiki page makes it sound like the wind turbines were first installed in 1999 ? 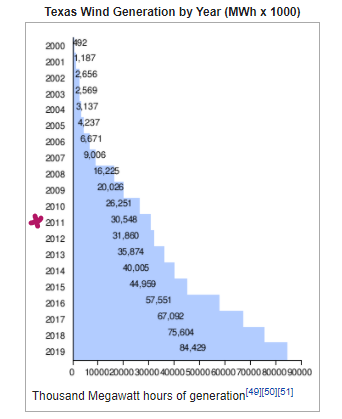 but they had the same grid issues in 1989

In the 1989 storm, wind chills reached 14 degrees below zero in Texas, forcing power plants to operate below capacity or fail to start altogether. And after that storm, as with the 2011 episode, regulators issued a slate of recommendations aimed at improving winterization.

“These recommendations were not mandatory, and over the course of time implementation lapsed,” FERC and NERC said in their 357-page report in 2011. “Many of the generators that experienced outages in 1989 failed again in 2011.”