Staff member
This looks like a plane flying in circles caused an interesting fallstreak pattern. 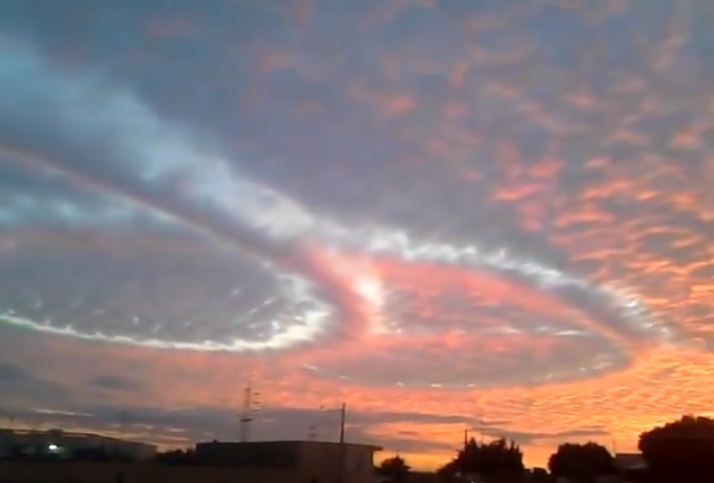 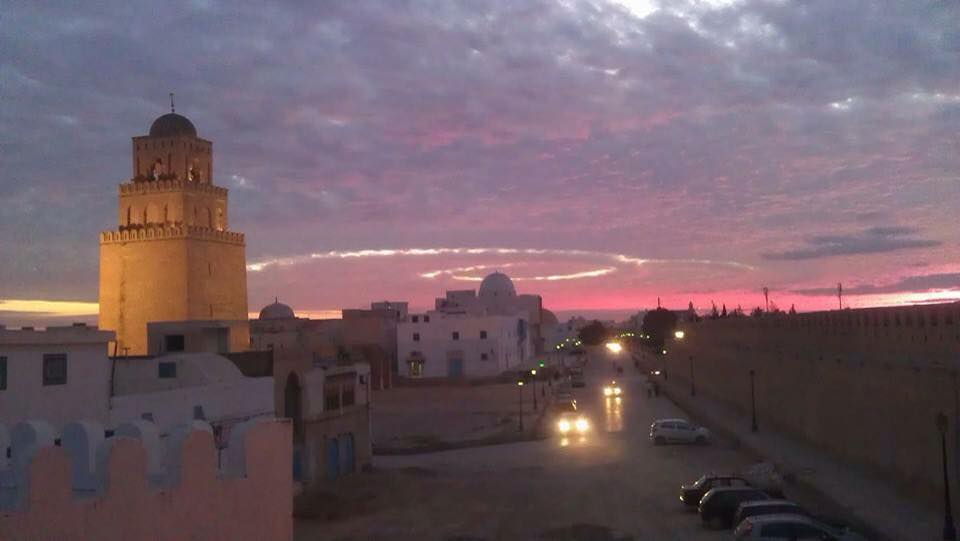 Would that be a fallstreak or a distrail - being a gap in clouds caused by a plane flying at the same level?

MikeC said:
Would that be a fallstreak or a distrail - being a gap in clouds caused by a plane flying at the same level?
Click to expand...

It's a fallstreak, as there's a central cloud. Distrails just leave a gap. 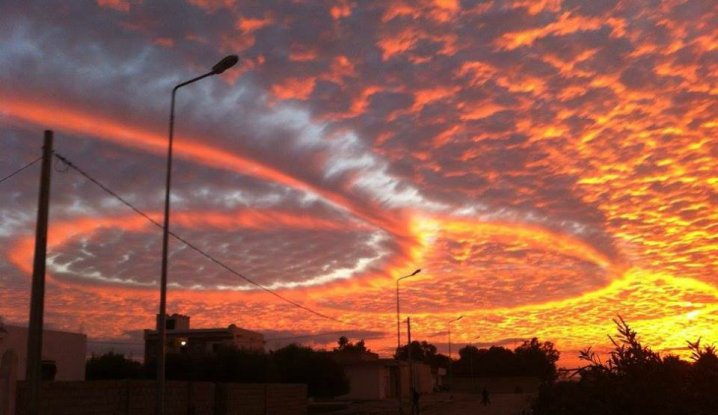 What’s causing these strange clouds over Tunisia?
Hint: it’s not aliens or Photoshop.

FIONA MACDONALD 20 DEC 2014
Dennis Mersereau reports for Gawker’s The Vane, the origin of the photo is pretty dubious, but reportedly they were taken somewhere in Tunisia over the past month.

Naturally, many chemtrail conspiracy theories and arguments over whether the image is fake also circulated with it. But Mersereau shared the below footage of the cloud formation to prove that it does, in fact, exist.


So then what are these clouds? As Mersereau explains, they’re altocumulus clouds sitting against a sunset, giving them their beautiful pink and orange colour.

The beautiful looping formation in the middle is known as a distrail, which is short for a dissipation trail. These are formed when a jet flies through altocumulus clouds, which are made up of supercooled water droplets. These droplets are still liquid below freezing, because they lack an impurity such as a speck of dust around which they can freeze into an ice crystal - this impurity is known as a “nucleus”, and it’s responsible for snowflake formation.

In this case, the impurity is provided by jet exhaust fumes, and once the droplets freeze into ice crystals they begin to precipitate and evaporate, and basically fall out of the cloud, as Mersereau explains.

In this case, the formation you can see in the cloud is the pattern the jet would have made when it travelled through it.

Being able to witness a distrail is pretty rare, according to Mersereau, because it requires a plane to fly directly through an altocumulus cloud. But when it does happen, as you can see above, the result is pretty spectacular.

Read Mersereau’s article over at The Vane to see more amazing distrail images.

And, in case you were curious, watch Joe from It's Okay To Be Smart explain why clouds stay up - even though they can weigh as much as a jumbo jet.

What Are These Strange, Beautiful Clouds Over Tunisia?
29,193
18 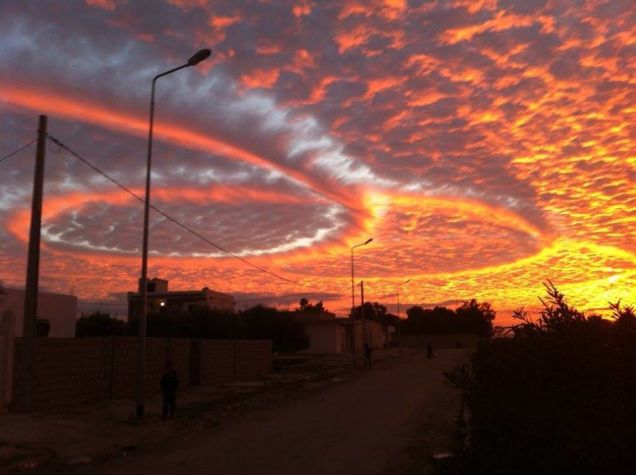 A gorgeous picture of a sunset painting brilliant colors over dramatic spirals in a wavy deck of clouds is making the rounds on social media this afternoon. The picture—purportedly taken in Tunisia—is so spectacular that it almost looks photoshopped. Here's an explanation for how these incredible clouds formed.

The origins of the photo are sketchy, but it appears that it was taken in Tunisia at some point within the past month. Since it cropped up, the photo has quickly spread through Facebook, mostly a result of conspiracy theorists using it as "proof" of a thoroughly-debunked conspiracy theory.

If, like I was at first, you're concerned that the photo is altered or a fake, there's video evidence to support the existence of the formation:


The photo shows a deck of altocumulus clouds sitting against the sunset, producing a beautiful palette of oranges fading to pink and red. Through the center of the clouds, a dramatic set of three spiraling loops appears, with a fuzzy stream of clouds in the middle flanked by peeks of a blue sky, much like a moat protecting the delicate formation. This spectacular formation through the clouds is something known as a "distrail."

We're most familiar with contrails, short for "condensation trails," or the wispy trails of clouds that form behind high-flying aircraft as a result of warm, moist jet exhaust condensing when it meets the extremely cold upper-atmosphere. "Distrail" is short for a "dissipation trail," and while they're similar to contrails, they form through a difference process. Altocumulus clouds often consist of supercooled water droplets—which are water droplets that are still liquid below freezing—but lack a nucleus (like a speck of dust) around which it can freeze into an ice crystal. These supercooled water droplets stay liquid until an impurity is introduced that allows the water to freeze—in this case, the impurity was jet exhaust.

The most likely explanation for the photo is that a military jet flew patterns through the altocumulus deck, expelling jet exhaust that gave the supercooled water droplets a nucleus around which to crystallize. Once these droplets froze into ice crystals, they began to precipitate and evaporate, causing a chain reaction much like we see with fallstreak holes. The result is a spectacular sight, with the clouds bisected (or looped, in this case) by a trail of ice crystals precipitating from the deck. 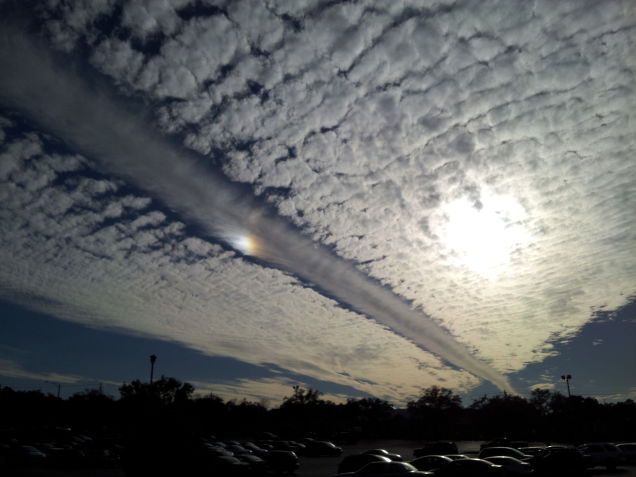 Distrails are pretty rare to see since they require aircraft to fly directly through the deck, which is a matter of timing and luck. I witnessed something similar earlier this year while waiting for a bus in Mobile, Alabama. The feature produced a once-in-a-lifetime shot, as a sundog appeared within the distrail. It was spectacular, and for months after I took this picture (and wrote a post about it at the Capital Weather Gang), I was harassed by conspiracy theorists (but what's new?).

While they look spectacular from the ground, fallstreak holes and dissipation trails in decks of altocumulus clouds are also a sight to see on satellite imagery.

This was actually a cool read. I have seen something similar myself and I wondered what factors played into it. Cool post!

Probably those ICA guys partying on their new Convair B-36
You must log in or register to reply here.