So I know this isn't actually Nibiru, but what actually is it? [Probably Mars]

Like I said, I know it isn'really the imaginary planet, but I'm curious as to what it actually is. 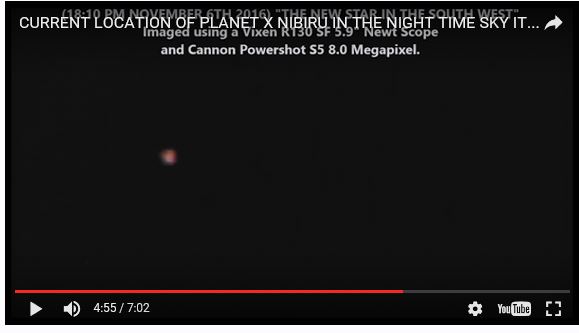 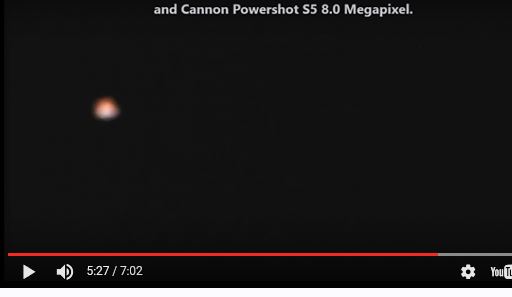 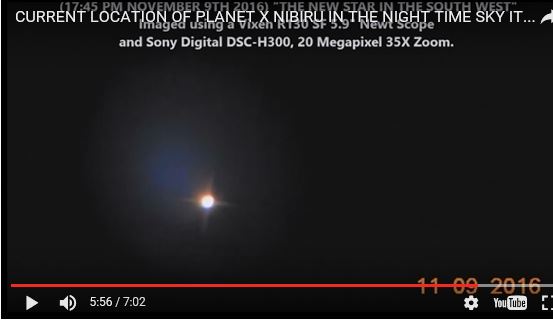 These images don't have enough information to tell us what this is. The main video looks like Venus. The telescope images have nothing by which to identify celestial coordinates, but by the (apparent) increasing magnitude and the blue offgassing apparent in the third picture, I'd guess its a comet.
Last edited by a moderator: Nov 11, 2016

Based on the stated date and time, the video is almost certainly of Venus. Saturn is not that bright. 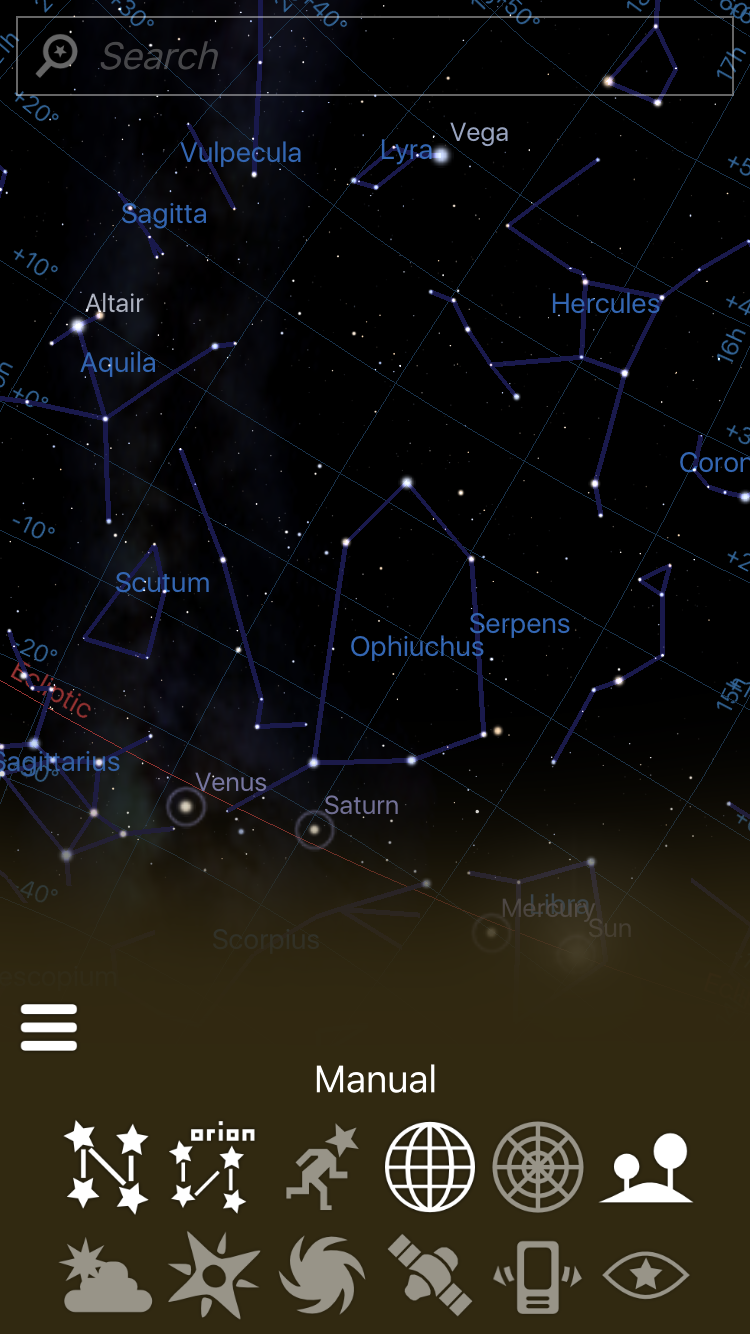 Given the information in the opening text, as well as the use of a 5.9" telescope to view it, I'd hazard a guess the photos are of the comet C/2015 V2. It was discovered 11/2015, which synchs with the friend viewing it since 1/2016, and has perihelion in 6/2017, consistent with increasing brightness and starting to offgas. Other visible comets need larger scopes to see right now.

the first thing looks like venus to me. if you notice everytime it "pulses" the camera either blurs out or the car headlight traveling there, "pulses" exactly the same. 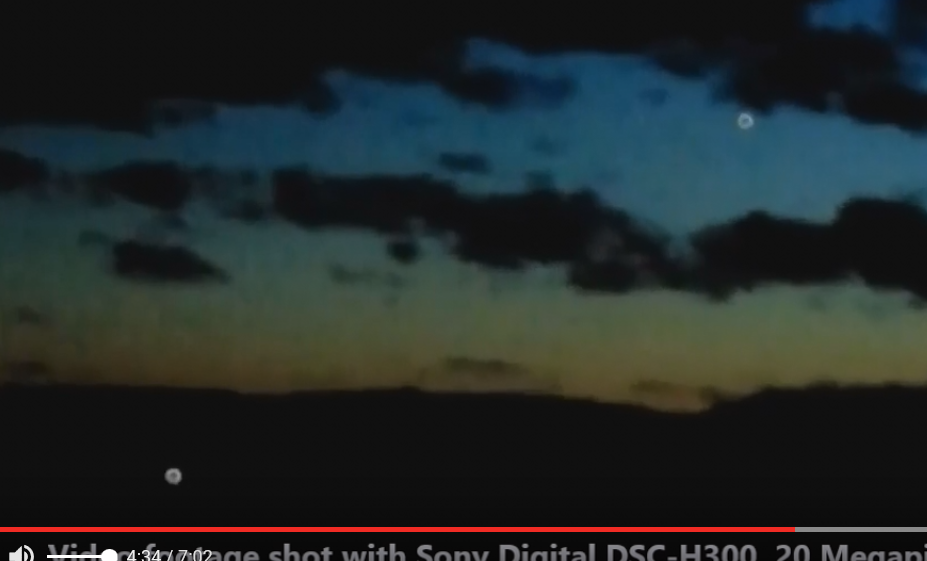 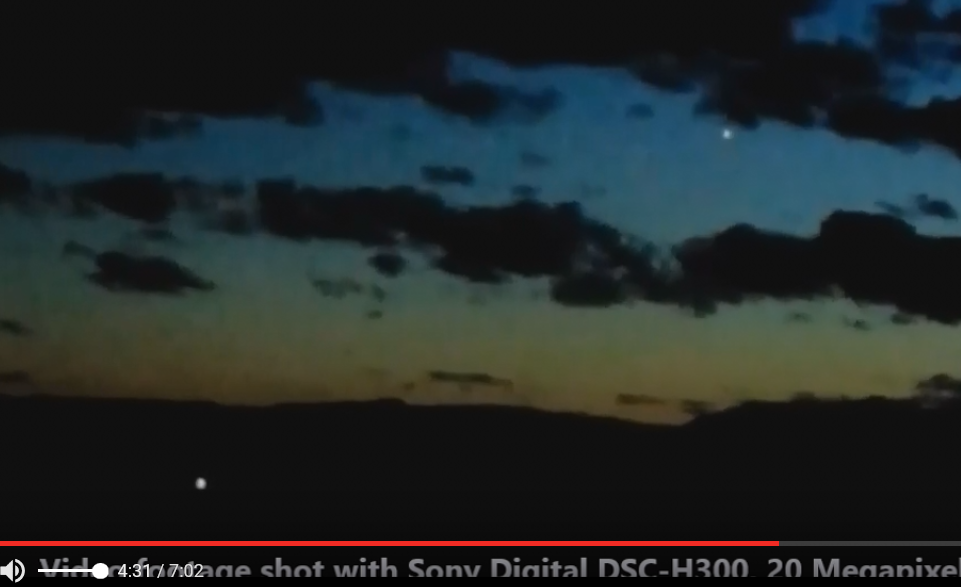 and stars give off different colors. heres one exmple, but you can find dozens of examples on astronomy blogs.
Source: http://lx850.tumblr.com/post/130388051667/spacetravelerx-ok-here-is-an-odd-star-cluster

Staff member
Coincidentally I took this photo of what I thought was Venus today, but now looking at Stellarium I think it's actually Mars 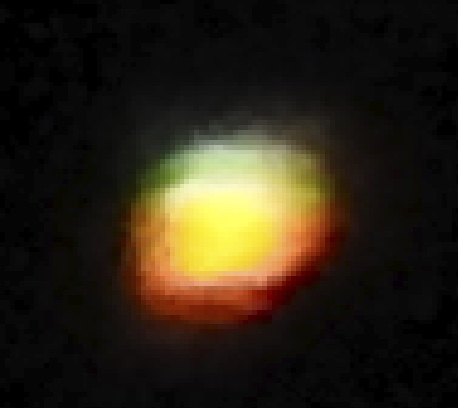 Lots of things can affect the color of such a small point of light.

This is when I took it, Venus it was too close to the horizon to be visible from my location at the time. 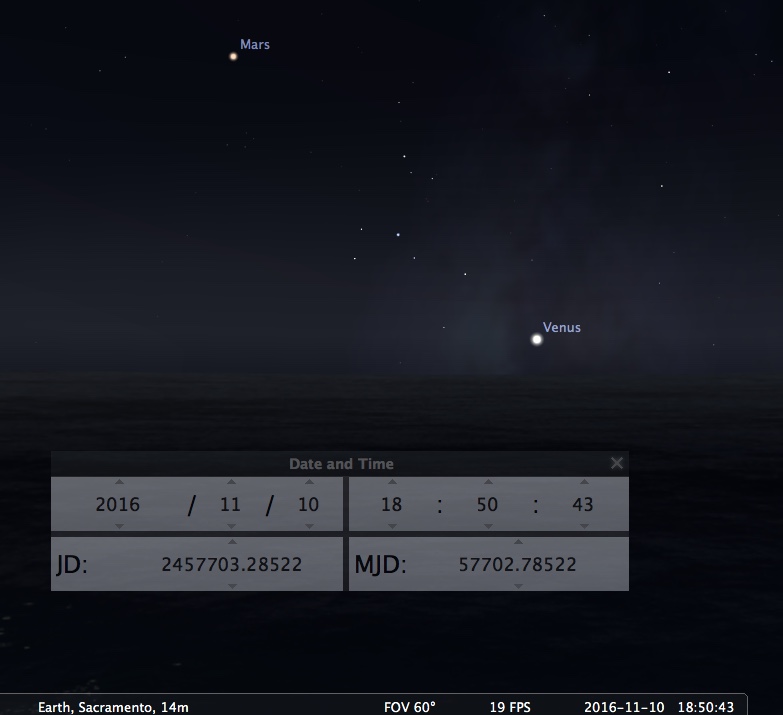 Staff member
Comparing with the "telescope" shots. I'm guessing since it's a telescope it's maybe upside down? My photo (of possible the same object, and either Mars or Venus) has a similar red at the top when flipped. 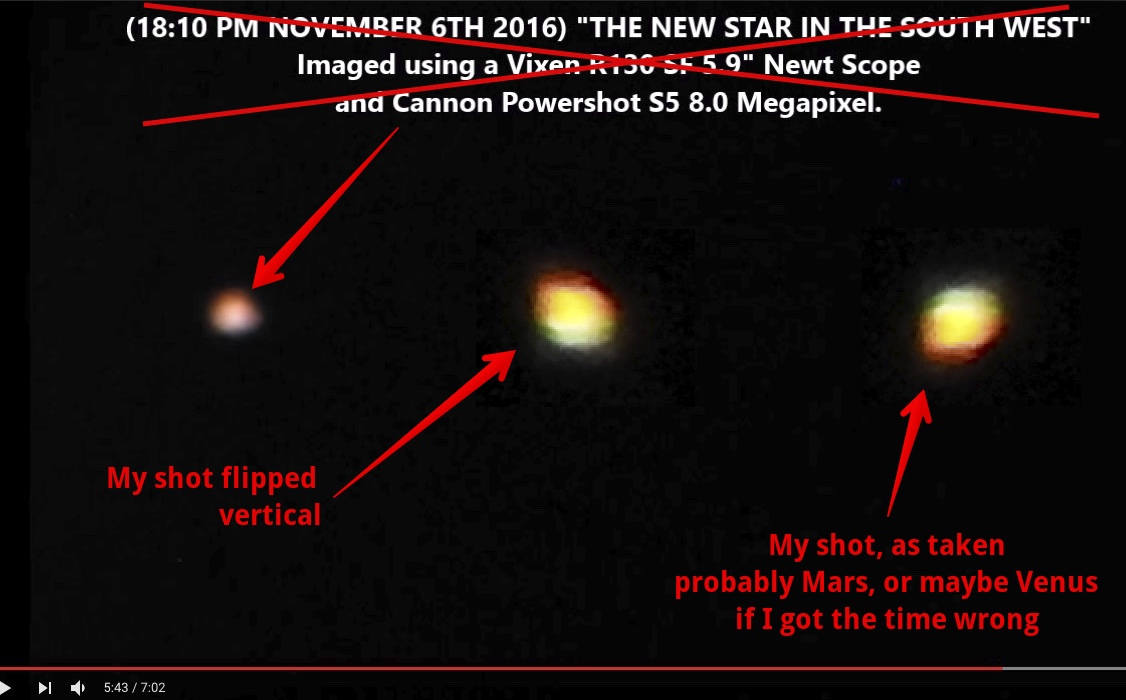 I took the photo by first focusing and setting exposure on the moon, and then moving around to take this shot.

The author of the video gives the time and place as 6:43 p.m., in Longview, Alberta Canada. She just says "Wednesday, November 2016" and that's a shame because Alberta just went through the time change. Internal evidence suggests it's Wed. Nov. 9, and fortunately she later shows the moon phase which proves it is that day. She says, "I was facing about 225 degees south/southwest."

Alberta is in the Mountain Time Zone, and as of Nov. 6th is minus 7 hours UTC.

I use this good old site because it's more cartoony then newer ones, which makes it easier to understand what you're looking at and get the essential info: https://www.fourmilab.ch/cgi-bin/Yourtel?lat=4.2359&ns=South&lon=192.773&fov=60.000&z=1

Set to the date, time and place: 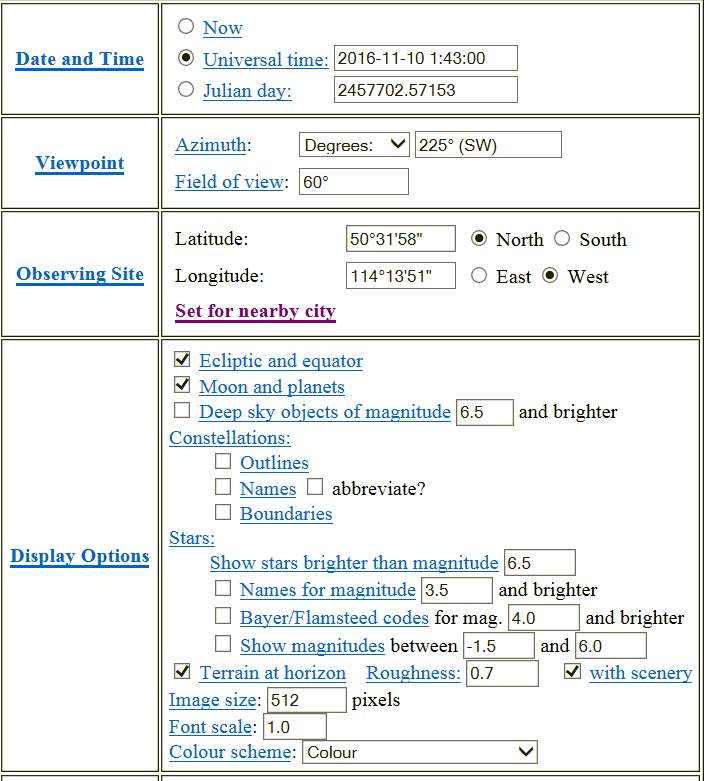 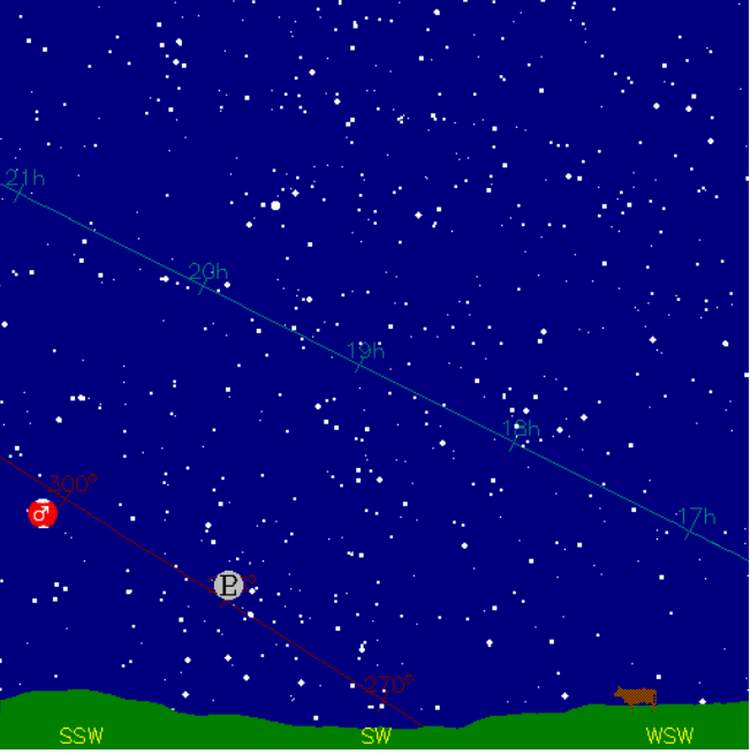 The white one is Pluto (not visible to naked eye or even a camera) and the red one is Mars.

The author says, "So, Venus and Saturn have set way over here somewhere." (Pans to right.) Which is correct.

She's looking at Mars and simply doesn't know it. 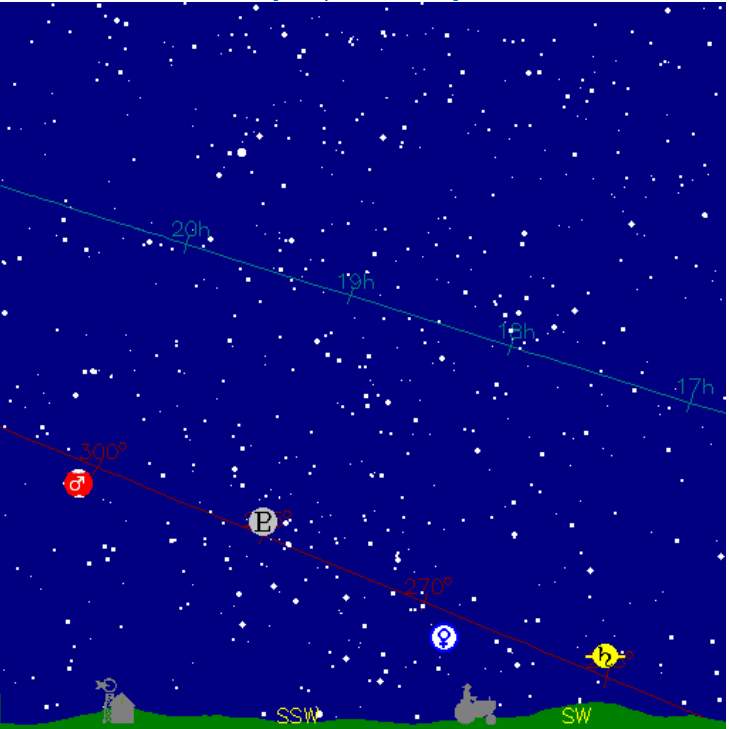 The female symbol is Venus and the yellow one is Saturn. So there they all are in a row along the ecliptic: Saturn, Venus, Pluto (invisible) and Mars. At 6:43 she correctly says that Venus and Saturn have set, which implies detailed knowledge about where the planets are in the sky. Inexplicably she doesn't seem to know that Mars should be the next in line after Saturn and Venus. She never mentions it.

Set to the same time, date and place as in the first image but looking southeast: 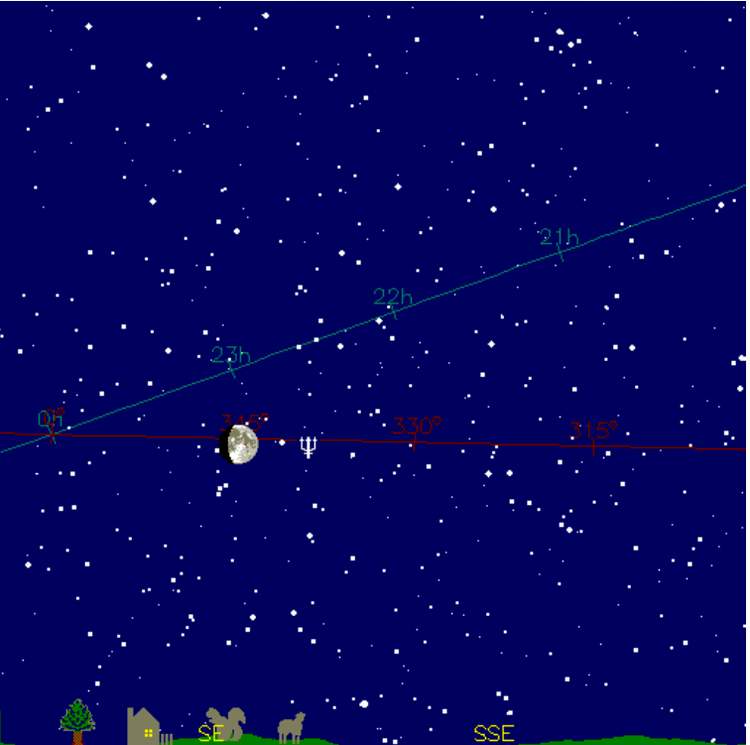 That's Neptune next to the moon, btw.

Her image of the moon:

The author of the video was first using a camera with a 35x optical zoom. Later she shows us photos taken through her Vixen R130SF 130mm f/5.0 Newtonian Telescope:https://www.amazon.com/Vixen-2604-R130Sf-Telescope/dp/B001KW07Q4

This one is properly exposed and shows the typical color of Mars through an amateur scope. There are no features and it's a bit lumpy and blurred. First, it's a telescope of modest size so the image wouldn't be too big. I suspect she used digital zoom on the camera to increase the size of the image - which of course doesn't improve the quality of the image; it just makes it bigger. Second, I suspect it's not really in focus; just mostly in focus. Third, of course, is atmospheric distortion. In short, it's a not too surprising amateur image of Mars with this equipment. 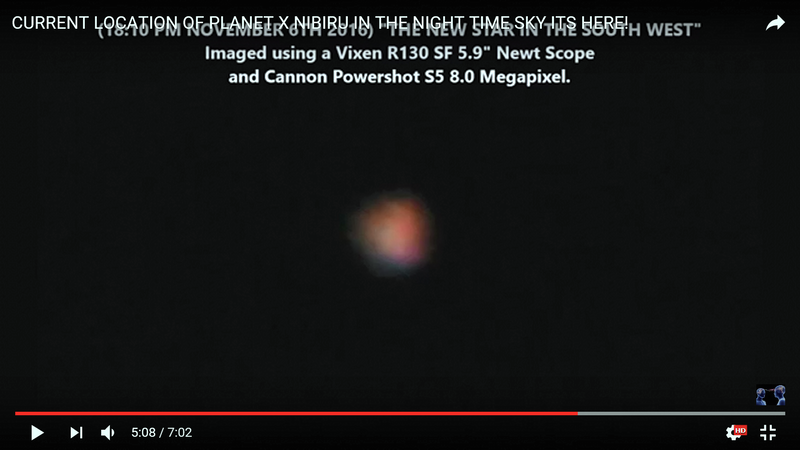 This one is overexposed: 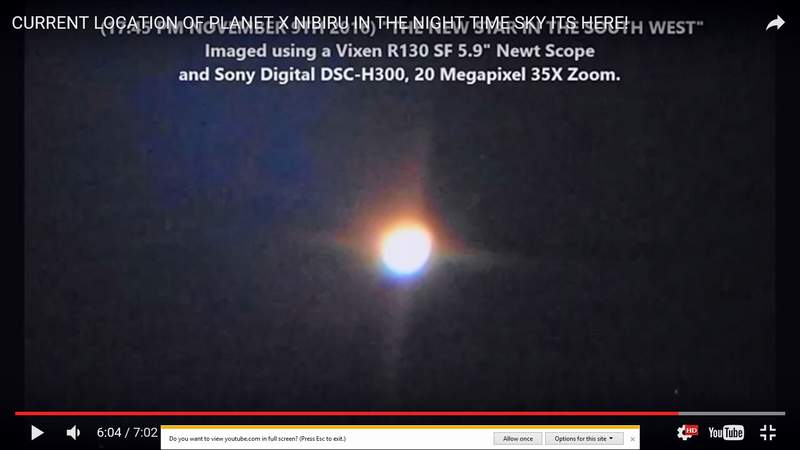 It looks white because the camera sensor has been overloaded and the true colors have been lost. The cross shaped flares are diffraction spikes due to the "spider" holding the secondary mirror in this Newtonian telescope. The red and blue colors on the top and bottom edges are due to chromatic aberration. (Not from the telescope itself - reflectors don't produce this effect.)

Both of these effects are noticeable in this overexposed image - but not the properly exposed one - simply because they, too, are brighter.

In the vast majority of reflecting telescope designs, the secondary mirror has to be positioned at the central axis of the telescope and so has to be held by struts within the telescopes tube. No matter how fine these support rods are they diffract the incoming light from a subject star and this appears as diffraction spikes which are the Fourier transform of the support struts. The spikes represent a loss of light that could have been used to image the star.

In optics, chromatic aberration (also called chromatic distortion,and spherochromatism) is an effect resulting from dispersion in which there is a failure of a lens to focus all colors to the same convergence point.[1] It occurs because lenses have different refractive indices for different wavelengths of light. The refractive index of transparent materials decreases with increasing wavelength in degrees unique to each.[2]

Chromatic aberration manifests itself as "fringes" of color along boundaries that separate dark and bright parts of the image, because each color in the optical spectrum cannot be focused at a single common point. Since the focal length f of a lens is dependent on the refractive index n, different wavelengths of light will be focused on different positions.

At first sight I opted for Venus, because of the azimuth of 225° and the apparent twilight. But the place, time and date (she actually says "wednesday ..... the 9th of november") put into stellarium gives this picture below: 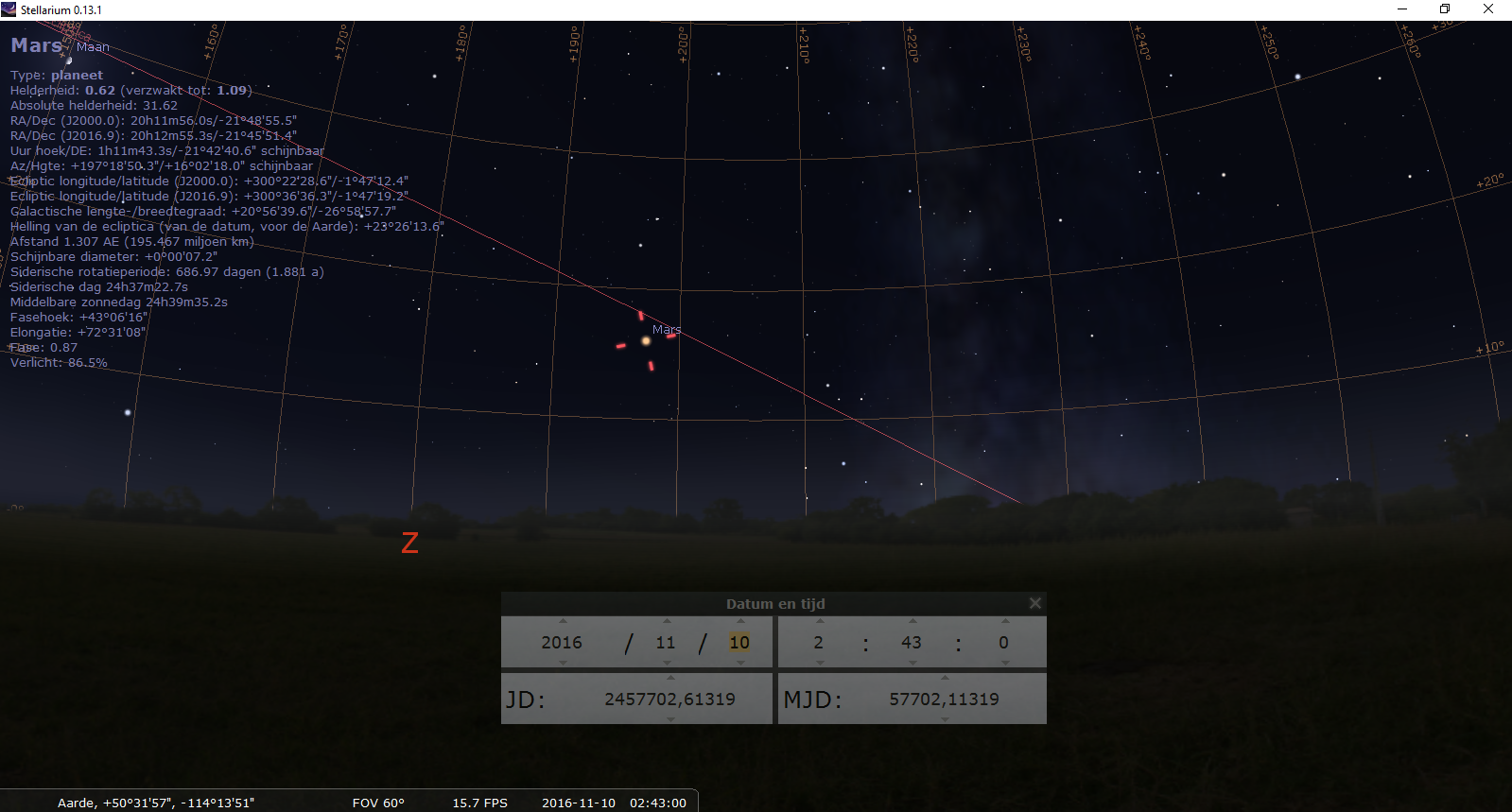 Mars' azimuth is given as 197°. Stellarium shows no more twilight but my experience is that there still will be some at that time of day and the videocamera will have enhanced it.

Comments not allowed on that video. They don't really want to know what they are seeing.

Hama Neggs said:
Comments not allowed on that video. They don't really want to know what they are seeing.
Click to expand...

i think she was very fair with that video. she gave a date and time (which most CT believers don't), didn't edit out the other lights in the video. Comments can get nasty quick on youtube, hard to blame a person for not wanting to expose themselves to that.

There were comments. The comments section got shut down later. There were many of the usual comments: preparing for the imminent disaster, trying to convince relatives and lamenting their lack of success, picturing the elite already preparing their underground shelters while selfishly not informing the public, etc.
Last edited: Nov 13, 2016

Z.W. Wolf said:
There were comments. It got shut down just recently.
Click to expand...

Were they explaining or attacking? Did she respond?

This channel has many previous Nibiru videos and my impression was of a community of commenters who were familiar with each other. I didn't see any attacks, but that was a couple of days ago. A mirrored version of this video has comments identifying the object as Mars. My guess is that the video on the original channel also started to get such comments and the comments section was closed. Just a guess though.
Last edited: Nov 13, 2016

Once again we see a bright object in a cloudy sky just above the horizon.

[0:43] That does not belong. Down over here [pans right] is to the southwest, more so than that, and that is where Venus and Saturn have set.

Content from external source
She pans to the left to show the moon and then pans back to the right and up somewhat.

[2:13] And let's go over this way, and we're going to see Mars. Hopefully, we'll see it through the camera. I can see it with my eyes... I'm not sure if I have the right... um, visibility with this camera. Anyway, Mars is in there. He's straight south; he's about 25 degrees above the horizon. Hopefully we'll catch it when we actually download this.

Content from external source
Nothing is visible. The camera is pointing high enough that the horizon is just visible at times. The camera is not in focus. Most likely she has the camera set to auto-focus and when the camera is just above the horizon, pointing at a relatively featureless dark sky, auto-focus loses the ability to sense differences in contrast and can't work properly.

She pans down and to the right and we see that once the horizon is visible the camera adjusts to proper focus and we see "Nibiru" again near the horizon.

[2:48] So let's go over again to the south/southwest, and find our little buddy. He's very, very bright. 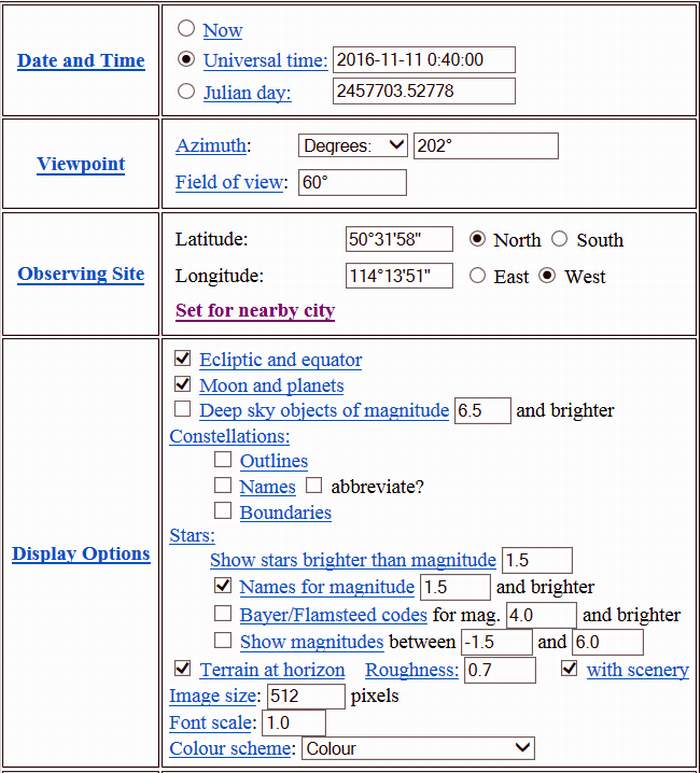 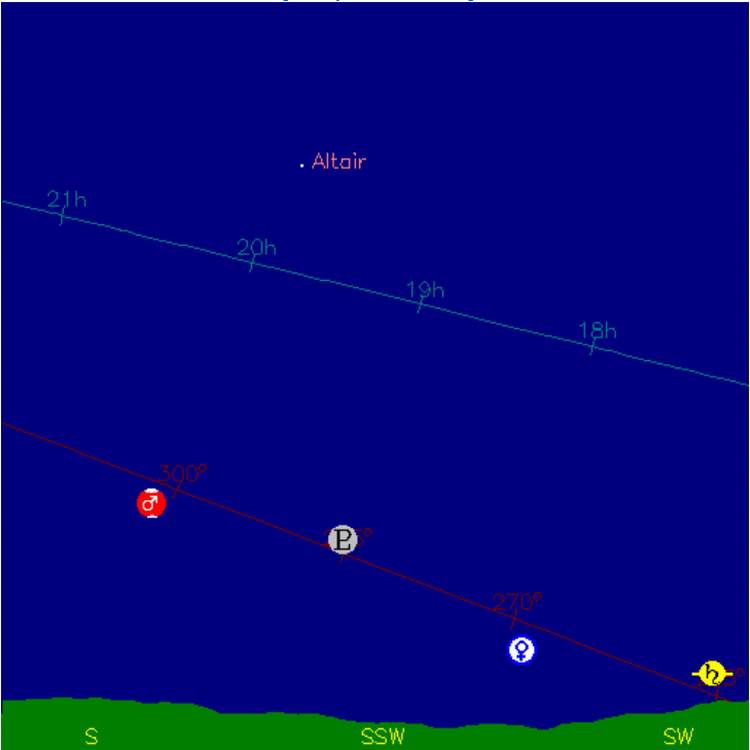 From left to right: Mars is red, Pluto (too dim to be visible), Venus is the female symbol and the yellow one is Saturn.

In the previous video, the author doesn't mention Mars. She now seems to be aware that she has to account for Mars.

I suspected that she might once again be identifying Mars as Nibiru and the object she is identifying as "Mars" might be a bright star, so I looked for stars brighter than magnitude 1.5. Altair is in that part of the sky, but doesn't match the position in the video. The author pans to the right and down to get "Nibiru" in the frame, but Altair is to the right of Mars and is too high in the sky.

But in this video the time is one hour earlier in the evening (5:40 verus 6:43) than in the previous video. Venus is still above the horizon, even though she says it has set.

This time she is identifying Venus as "our little buddy" (Nibiru) and identifying Mars correctly.


We never see Mars in this video both because of the focus problem and because of exposure and contrast. There is much more light in the sky in this video than in the previous one so the camera adjusted the exposure setting down. Also, dim objects in a brighter sky are less visible because there is less contrast between the bright sky and the dim object.

The opposite is true for the previous video taken later in the evening. The camera adjusted exposure up to adjust to the lack of light, and dim objects are more visible in the darker sky because there is more contrast between the two.
Last edited: Nov 13, 2016

Says the video is private. The one in the OP now says "private" too.

Yeah. They both went private shortly after my last post. But they are both back up again.
Last edited: Nov 14, 2016

Z.W. Wolf said:
Yeah. They both went private shortly after my last post. But they are both back up again.
Click to expand...

They both still come up as "private" for me.

Yes, they both went back to private yet again.
You must log in or register to reply here.