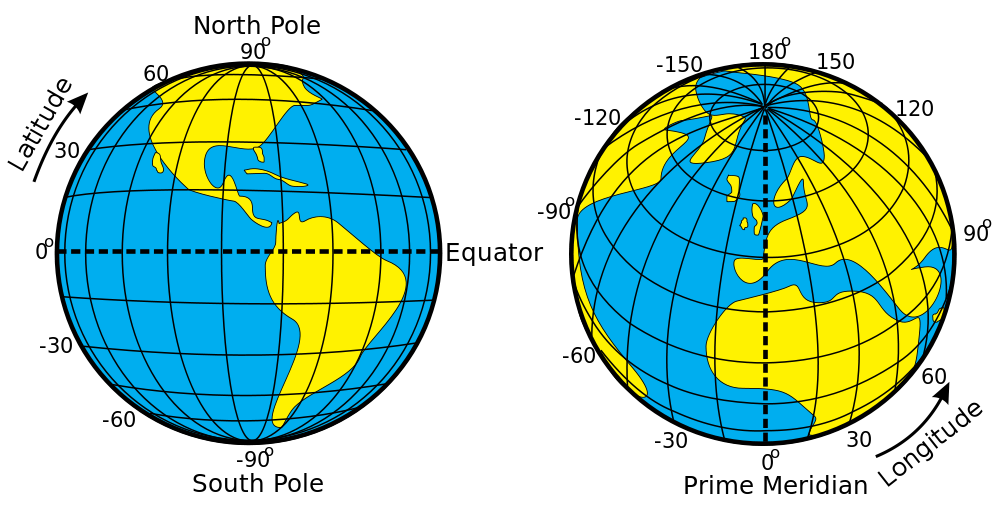 Any position on the surface of the world can be represented by two numbers: latitude (the north or south angle from the equator) and longitude (the east or west angle from the Prime Meridian in England). These two numbers are generally referred to as coordinates. In the past you might have said "map coordinates" but now it's more common to said "GPS coordinates".

Latitude and Longitude clearly work for identifying places, you can go onto Google Earth, zoom in on a place like Santa Monica Pier, and you will see the latitude and longitude in the lower right corner. 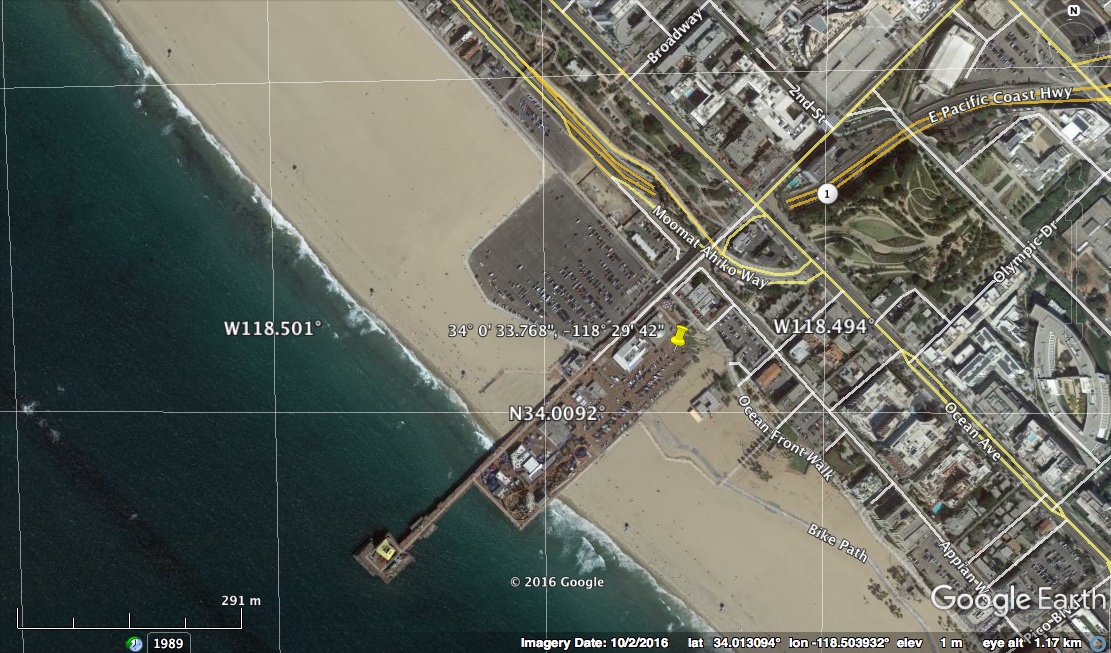 You can stick this in your GPS and it will take you there. Or you can just go there and look at the coordinates your GPS device reports. You can repeat this anywhere in the world (or check with a friend) and you'll find that latitude and longitude are perfectly accurate, even in South America and Australia.

You can even got back over your personal vacation photos taken with an iPhone or GPS enabled camera, and see if the latitude and longitude of your photos of landmarks match the position on official maps or on the Globe or on Google Earth. For example here's a photo I took at Machu Picchu in Peru, 13° south of the equator. The embedded GPS matches exactly. 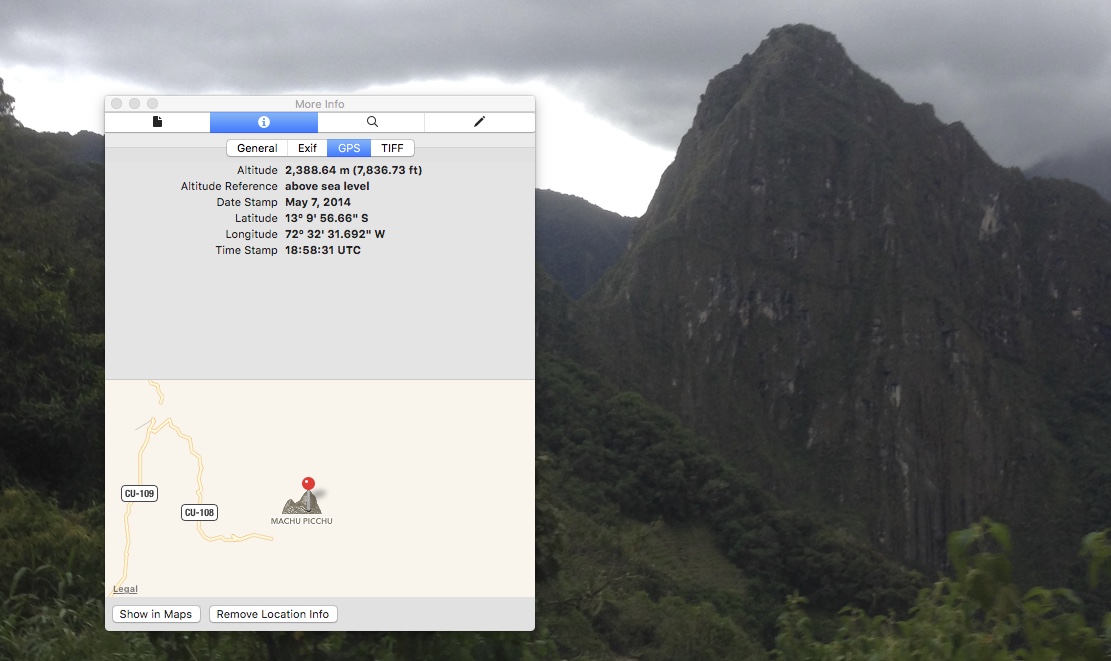 I'm laboring this rather obvious point as a foundation for the actual point. Latitude and Longitude create an inescapable problem for the Flat Earth promoters. Since Latitude and Longitude are correct, then the only possible Flat Earth map that matches this would be the Azimuthal Equidistant projection. The is the most common Flat Earth map you see, where latitude is simply the distance from the North Pole. The map grid below shows this with the lines of longitude radiating from the north pole, and the lines of latitude as concentric circles around the pole. Each line is 15° apart. 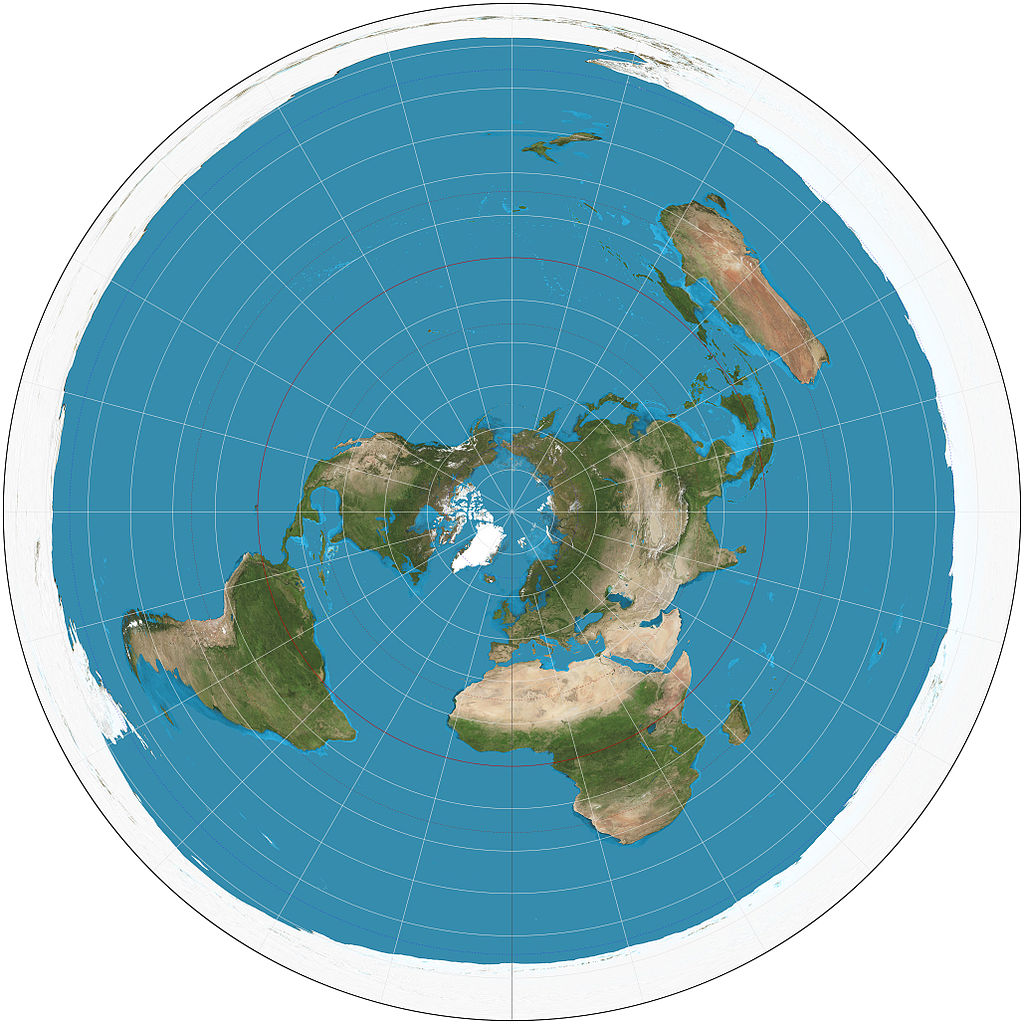 This map works perfectly in that the latitude and longitude of everything on the map is correct. But as many people have pointed out over the last 150 years of Flat Earth debunking it fails utterly in representing the distances between places. There no two places (except those that are due north/south of each other) where the distance or headings are correct.

This has been discussed at much length elsewhere, and you can read about it, or watch one of several videos. However I'd encourage you to really do your own research, and start with something very simple: verifying your own latitude and longitude.

Latitude can be verified whenever you can see the north star, Polaris. You just need to measure the angle of the North Star, and that's your latitude. This simple act is a pretty straightforward proof of the curvature of the Earth in itself - since the angle varies exactly with your surface distance from the equator - but I think it's a good idea for Zetetics to have personally measured these things before arguing about them.

So give it a go, make a simple version of a device called an Atrolobe with a printed protractor and a simple plumb bob. 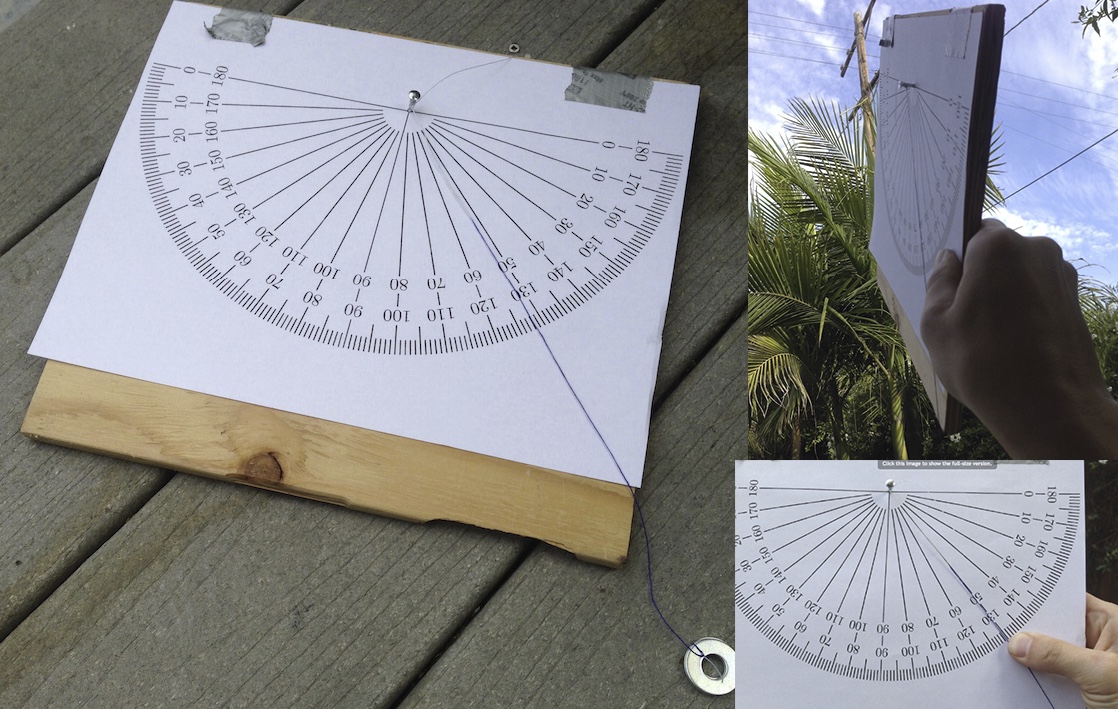 Sight the north star Polaris along the top, and measure the angle of the plumb bob. The result will be your latitude, and with care should be accurate to within a degree. You can get more accuracy, but this should be sufficient verification.


Now Longitude is more complex. In order to find your longitude you need to know what time it is in Greenwich, England. Then you need to find at what time the sun is highest in the sky where you are (some time around noon in your timezone, or around 1PM with daylight savings) and compare that to noon in Greenwich. Since the rotation of the earth relative to the sun is 24 hours then the time difference as a fraction of 24 will tell you your longitude. For example if you see the sun at its lowest when it's 6:30 PM in Greenwich, then you are 6 hours and 30 minutes behind, or 6.5/24 of a rotation, which is 360*6.5/24 = 97.5° W. Like somewhere around here: 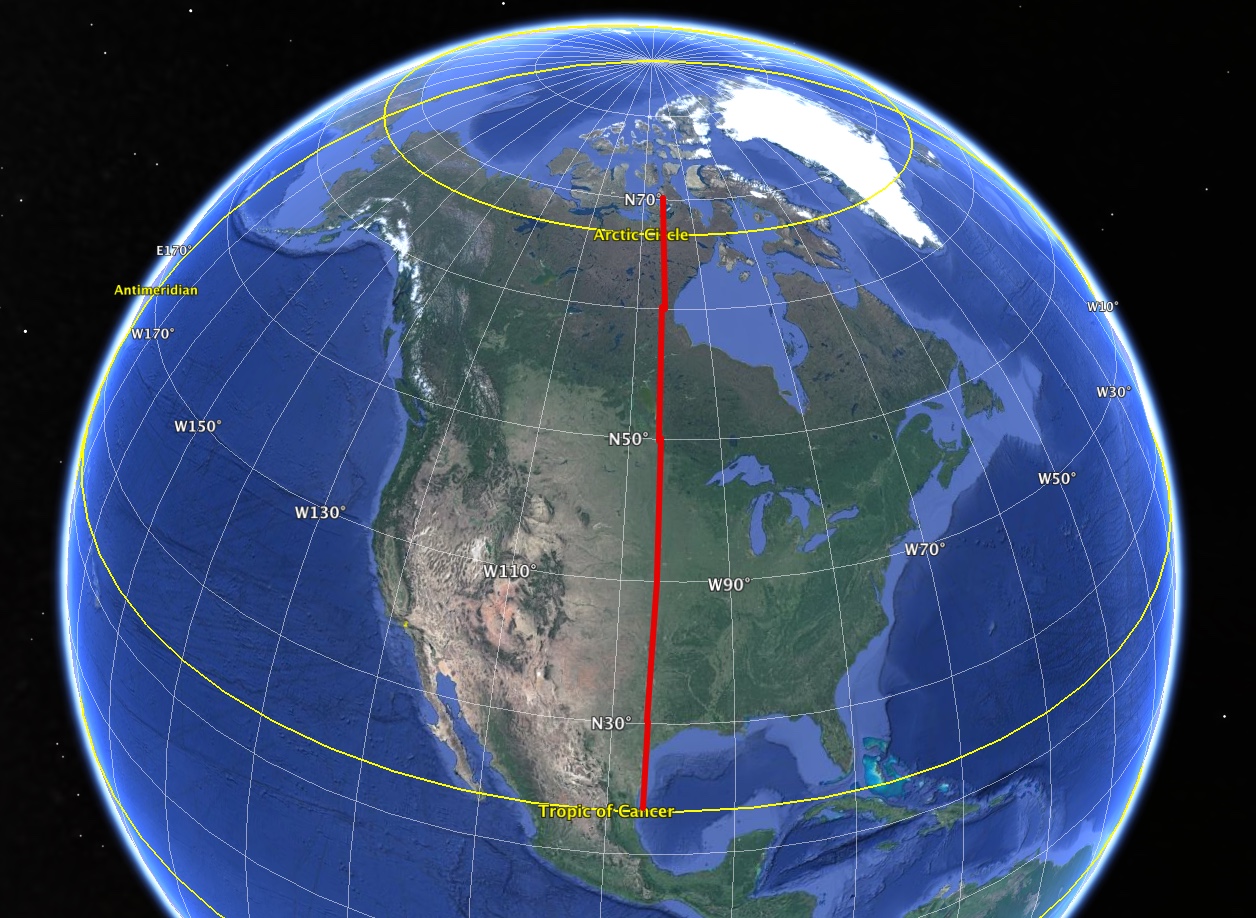 A simple way of doing this is to set up a stick so it casts a shadow on a piece of card. Then every few minutes (or every minute when close to the actual solar noon) mark off where the shadow is, and note the time. Then after the shadows start to get longer again see what the time of the shortest shadow was. That's your "solar noon". See what time that corresponds to in Greenwich, and then you can calculate your longitude.

You can check this against the "official" calculation at NOAA's Solar calculator site: 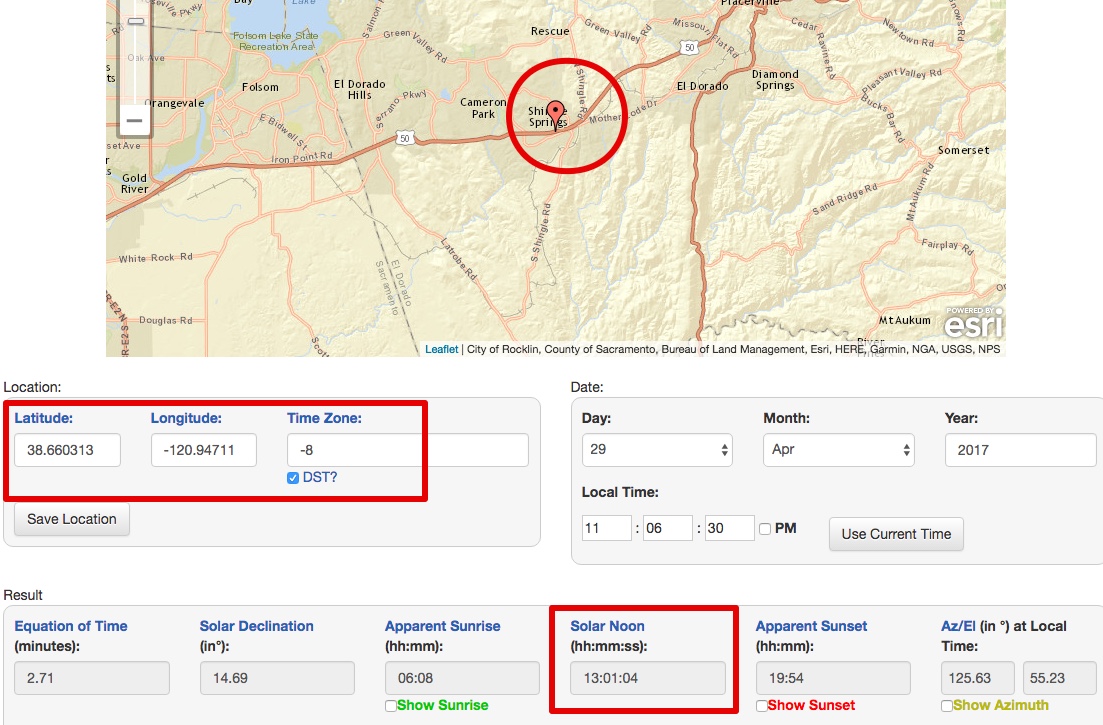 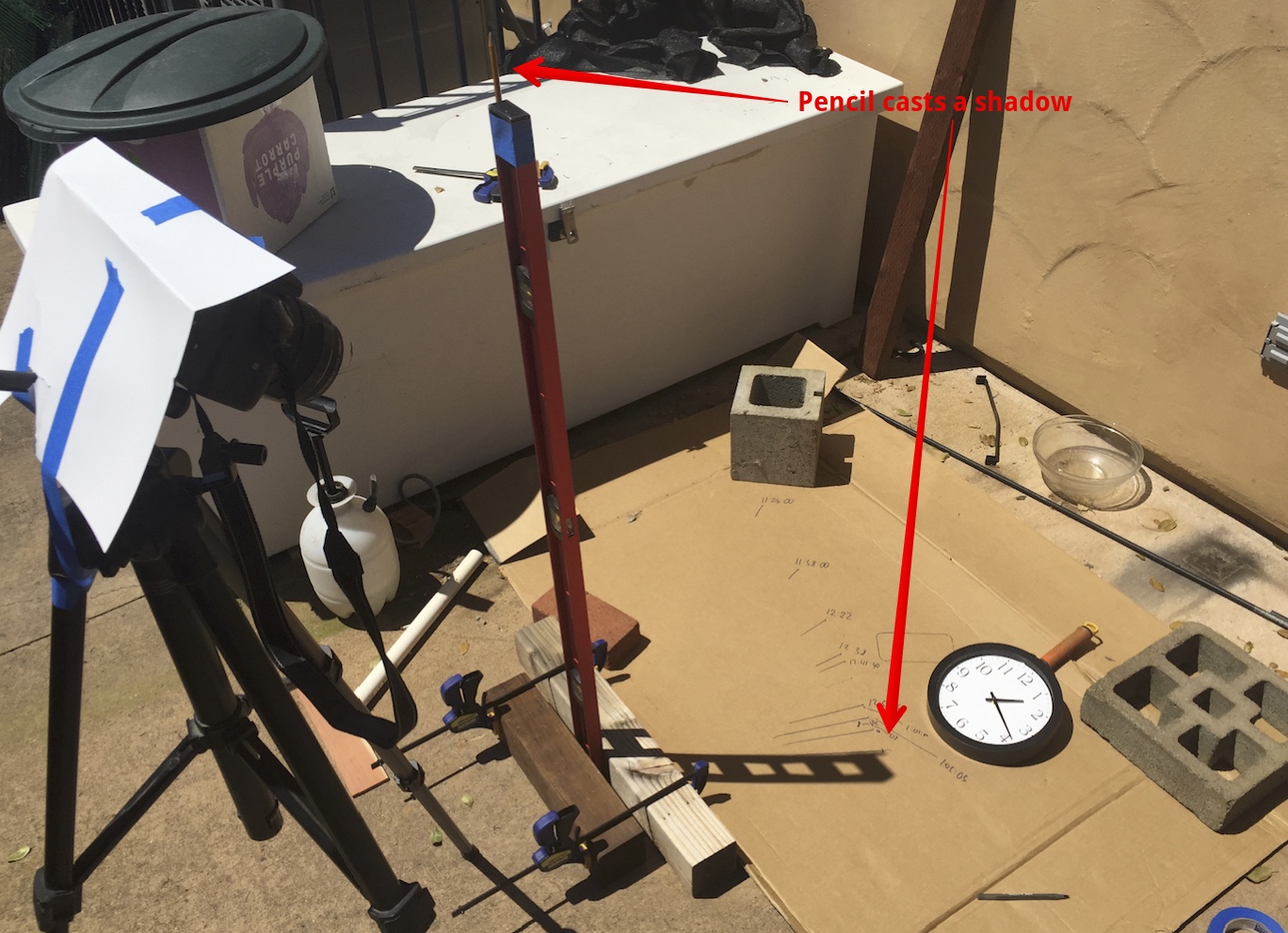 
Measuring the length of the shadow turns out to be pretty tricky. The better approach is to draw a line through the ends of the shadows. This gives you a very shallow curve, and you can see the angle between the shadow and this path gradually becomes more and more perpendicular. Solar noon is when the shadow forms a right angle with the shadow path, which it does around 1:01 PM, at about the expected time. 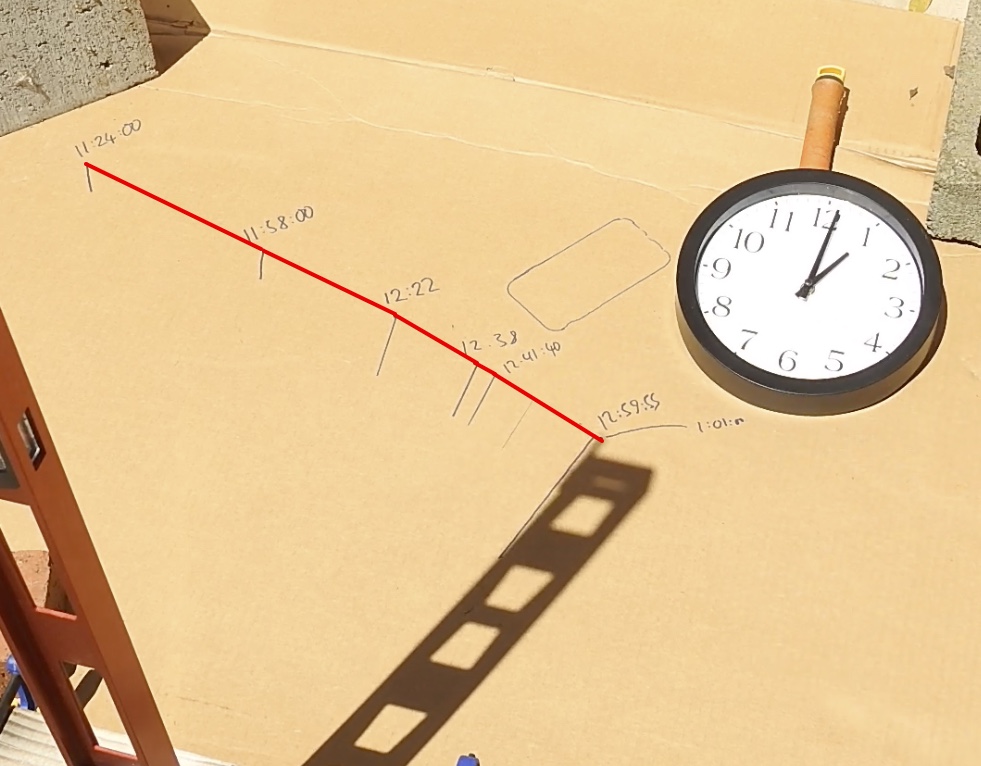 Why bother with any of this? Well it's a fun little science experiment in itself. But for those unsure about the shape of the earth it should give some valuable perspective on the consistency of the latitude and longitude system. And of course if the latitude and longitude system is consistent, then the Earth can only be the shape on which all the distances and angles work out. It has to be a globe.

at the risk of being a bit nerdy again: I think that for determining the longitude you should also consider the equation of time. The Sun reaches its highest point not exactly every 24 hours. It speeds up and slows down through the year a tiny little bit, resulting in a difference that can accumulate to being 14 minutes late on its own "mean solar time" in february and 16 minutes ahead in october. This would lead to a possible error of +/- 3 to 4 degrees in longitude if you assume that the sun goes through the meridian (direction south -- highest point) always at the time of (mean) 'solar noon'.

Henk001 said:
The Sun reaches its highest point not exactly every 24 hours. It speeds up and slows down through the year a tiny little bit, resulting in a difference that can accumulate to being 14 minutes late on its own "mean solar time" in february and 16 minutes ahead in october.
Click to expand...

Yes, I decided against getting into that as the post was already getting a bit overcomplicated. Simplistically what that changes is the solar noon at Greenwich, which today is 11:57:20 GMT. My time is 13:01:04 (via NOAA, my measurement is approximately somewhere near there) If we add the 2m40s to the time difference we get 8h 3m 44 sec, and hence:

The equations used by the calculator seem to be given here:
https://www.esrl.noaa.gov/gmd/grad/solcalc/solareqns.PDF

Mick West said:
Yes, I decided against getting into that as the post was already getting a bit overcomplicated. Simplistically what that changes is the solar noon at Greenwich, which today is 11:57:20 GMT. My time is 13:01:04 (via NOAA, my measurement is approximately somewhere near there) If we add the 2m40s to the time difference we get 8h 3m 44 sec, and hence:

The equations used by the calculator seem to be given here:
https://www.esrl.noaa.gov/gmd/grad/solcalc/solareqns.PDF
Click to expand...

The explanation of why the solar noon varies through the year may be complicated, but the calculation is still rather simple: your longitude = (your solar noon - Greenwich solar noon)/24*360°

Does the curvature of earth also affect the lenght of the casted shadow? (in addition to the altitude of the sun ofc)

Enricks said:
Does the curvature of earth also affect the lenght of the casted shadow? (in addition to the altitude of the sun ofc)
Click to expand...

Not unless it's really large (like over a mile high), and cast on a level surface. And even then the resultant shadow won't be distinct enough to measure to that accuracy. So no, not really.
You must log in or register to reply here.