Sorry if this is wrong place to ask but earlier to day i saw a very fast aircraft leave a grey con trail behind. The odd thing about it was the plane was so fast i couldnt see it and i could only at first see the contrail buy looking through my sunglasses as it wasnt visible to the naked eye. Is this a normal occurance and if so what is it. If anyone can answer this ide be very happy to hear what you think.

Staff member
The lane was probably hard to see because it was high, not because it was fast. The height, combined with a slight haze, and probably a gray colored plane, would make the plane be very low contrast compared to the sky, and so hard to see. 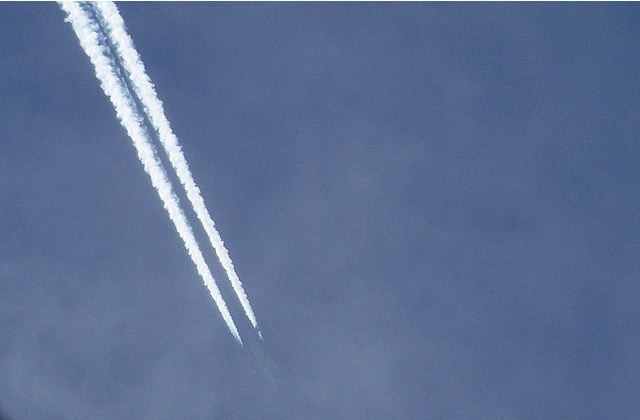 You can just make out the plane here, but from the ground it would probably be invisible to the naked eye.

The contrail would probably be gray because it was not in direct sunlight.

Probably best to ask such questions over at http://contrailscience.com
Last edited: Nov 20, 2013
U

Thanks for reply but i didnt give you all the information so here goes. I was working in my garden this morning clear blue sky not much cloud cover to be seen , i live close to the sea and i have quite a good view for many miles skyward. I saw a single engined twin seater aircraft fly over at a usual height, have no idea in feet how high, could make out the windscreen of aircraft. As i looked at it i noticed a white contrail forming higher up in the sky from a twin engined jet, high altitude and moving fast. It was directly flying into a grey contrail that looked unusual, not as crisp as the white contrail . I thought at first the grey contrail was left a long time earlier and it was just coincidence but as i tried to follow the line of the grey trail i could see it forming and wasnt to far ahead of the aircraft with white trail. As i looked the grey contrail just seemed to accelerate at a very high pace leaving the trailing plane standing both planes exactly kept in line and i could see them for several minutes as they moved across the sky but i just couldnt see the aircraft leaving the grey trails but i could see the slower moving one . I was surprised that the white twin engined plane was left behind as it was moving quicker than other jets lower in the sky by some considerable measure.

its a very interesting explanation but mine wasnt quite like this. Sun was at 2 oclock aircraft was at 9 traveling away from the sun. after aircraft had gone out of view the grey and white trails where broken up by the wind and went in slightly different directions the grey line looked more like smoke than a shadow as confirmed by my wife who also saw it. Ide like to thank you for trying to answer my question . Cheers fella

Staff member
Very hard to guess without photos. Note though that "travelling away from the sun" is one of the attributes of an edge shadow. But looking like smoke probably isn't.

Maybe have a look around google images for odd contrail photos and see if anything looks familiar.

Of course, it could also be something really unusual, like a spy plane, a missile test, or even a meteor. Very hard to say though.
You must log in or register to reply here.

S
Does this video footage show a dragon (sea serpent) attacking a manatee? [No]