From a plane cruising at high altitudes, contrails behind other planes may sometimes appear dark while the planes themselves being sunlit. 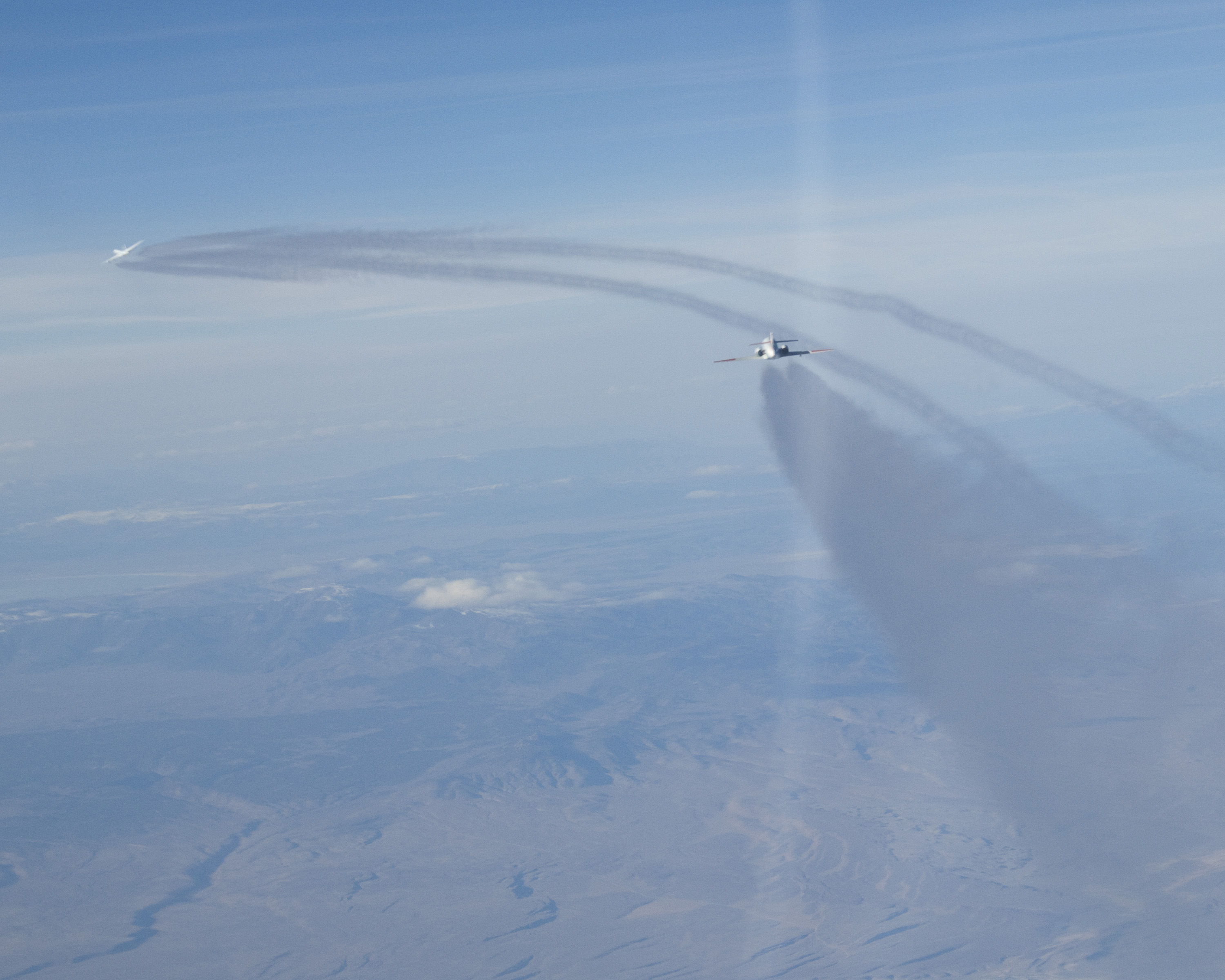 Several previous Metabunk threads have been discussing this phenomenon in connection with the claims about the contrails' dark colour being due to a deliberate injection of chemicals into the engine exhaust or its contamination by incompletely burnt fuel (L1, L2, L3). These were rebutted by the notion that perfectly normal contrails might appear dark at certain lighting conditions. However, a proper physical explanation of why and how these conditions occur was lacking.

Like cirrus clouds, contrails are aerosols of tiny ice crystals, which themselves are colourless. The white colour of a contrail is due to the scattering of sunlight on these crystals. For the same reason, sunrise and sunset contrails acquire red hues. A contrail will appear dark, if the amount of light it scatters toward the observer is less than the amount of light coming from its background. At twilight, for example, the contrails in the Earth shadow are dark, but so the planes are. To appear bright the plane is ought to reflect more light than comes from the background. How can a right balance between the amounts of light scattered by the contrail, reflected by the plane and coming from the background be achieved?

http://hyperphysics.phy-astr.gsu.edu/hbase/atmos/blusky.html
Because aerosols scatter much more light forward than backward, backlit contrails are brighter than frontlit ones. In contrast, the planes are the brightest if they are illuminated from the front, in this case they also outshine their contrails: 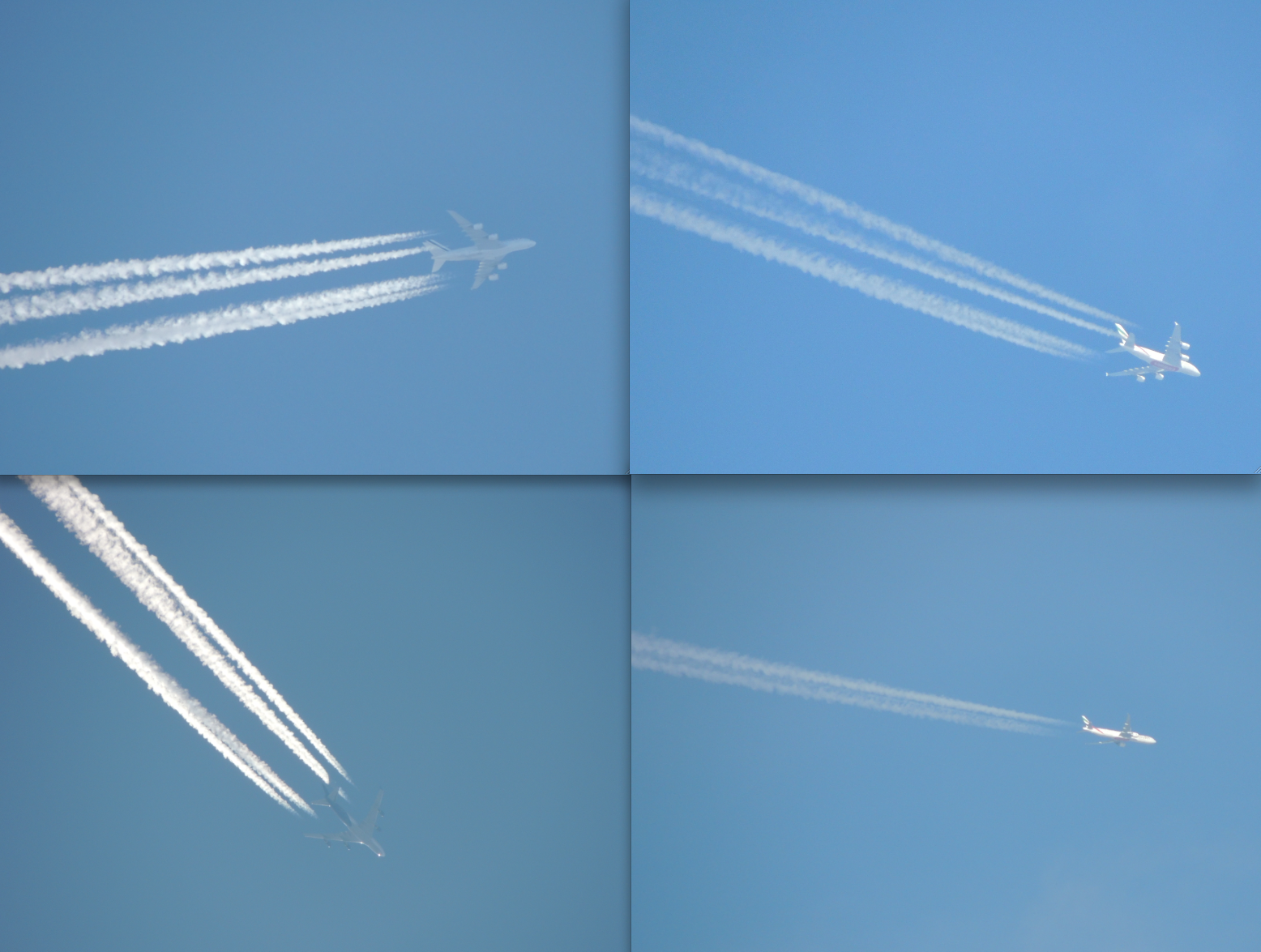 Therefore, if the Sun is behind the observer, it is possible in principle to have the background light brighter than the contrail but dimmer than the plane. However, it is (almost) impossible to have such lighting conditions for the ground observations. This is because contrails are normally formed at altitudes where the atmospheric pressure (about 250 kPa) is only one fourth of that at the sea level. 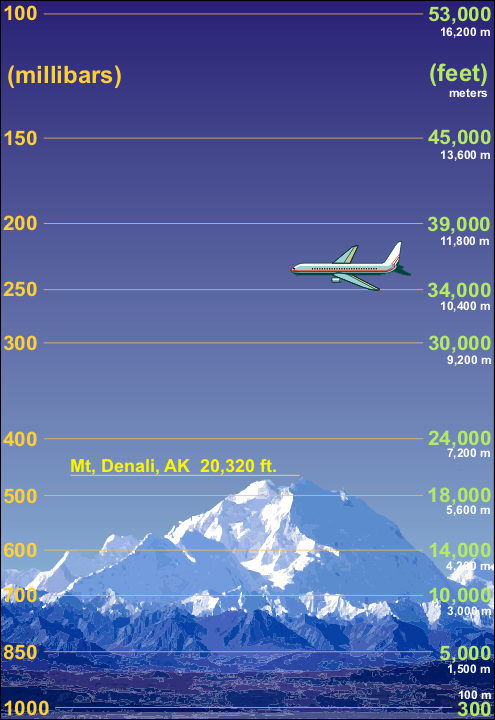 This means that the bulk (three quarters) of the air lies below the contrails, that is, in the foreground. Diffuse light scattered by the foreground air makes contrails dimmer but not darker. In contrast, for the contrails observed from about the same high altitudes, there is much more air behind them than in front of them. The intensity of light scattered by the huge mass of background air can in principle exceed the intensity of light scattered back by a frontlit contrail. There may be additional factors that can tip the balance toward "dark contrails". The presence of a high altitude haze will dim the contrail by reducing the direct sunlight and increase the background light at the same time, whereas light reflected from the ground or low clouds will add to the background illumination.

Ground level contrails also have all light-scattering atmosphere in the background and therefore may appear dark against the sky: 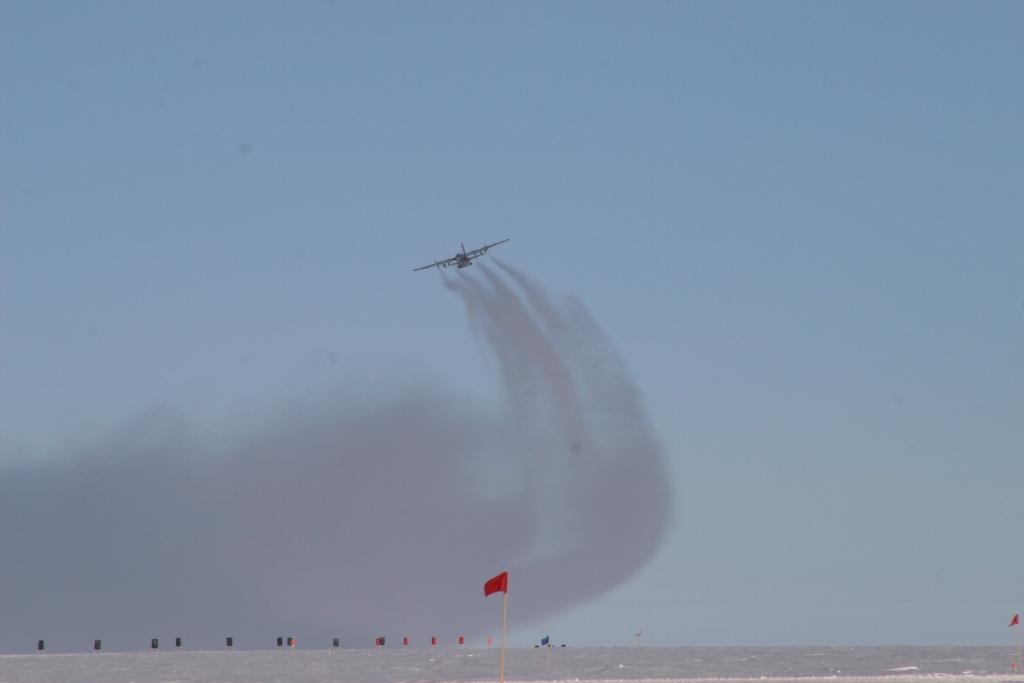 Staff member
Regarding the angle of the sun on the trail, I took this photo this morning from a plane at 38,000ft over France: 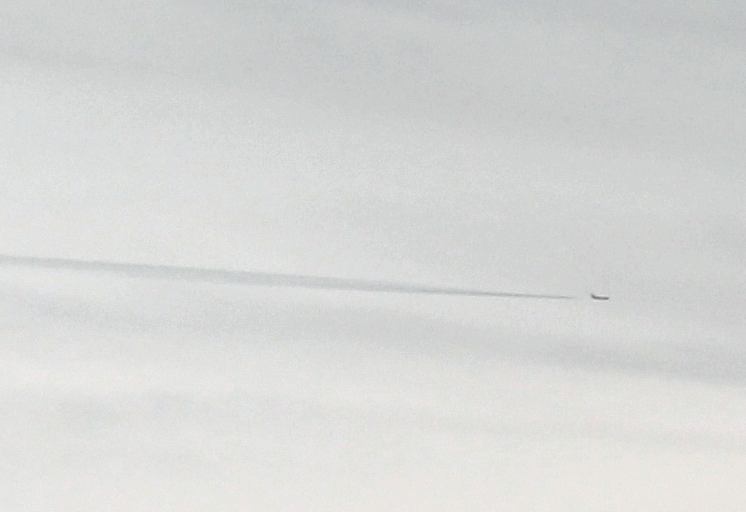 In this case, both the plane and the trail look dark, but the trail is actually backlit, not frontlit.

This is the best close-up of the plane I could get: 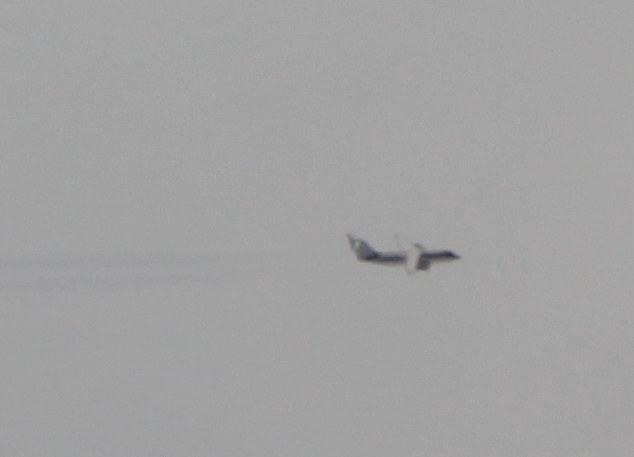 which I think confirms that it is this plane (I was on the other plane highlighted, TOM9PX): 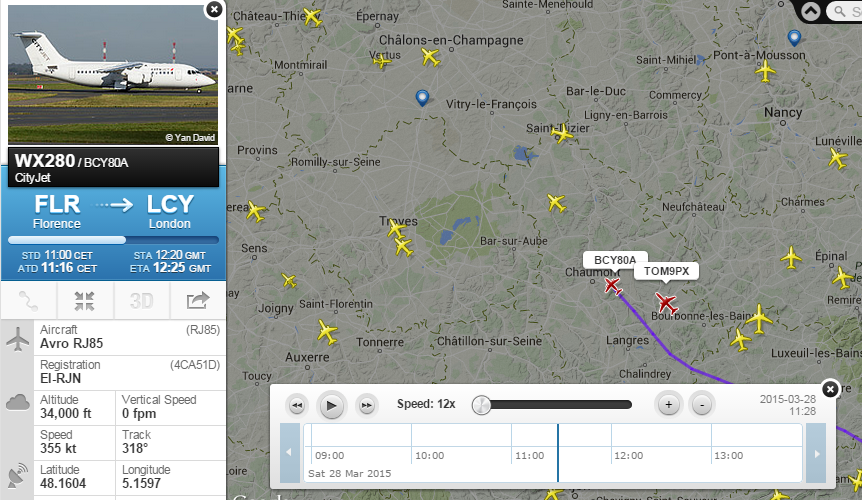 The heading was 318 degrees. Looking at the sun angle for that location (Chaumont) at that time, 11:28pm GMT: 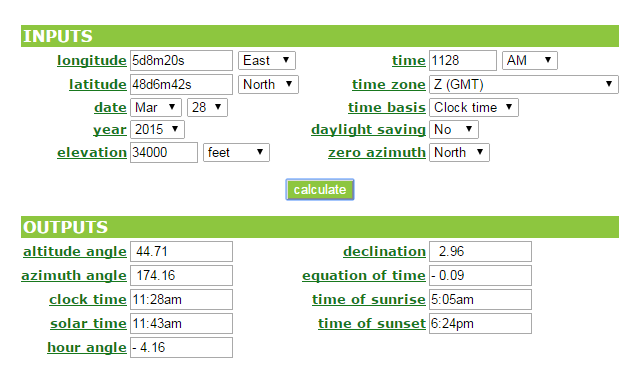 it is 174 degrees, almost due south. So the contrail (and plane) were lit from behind and to the rear, and both appeared dark. 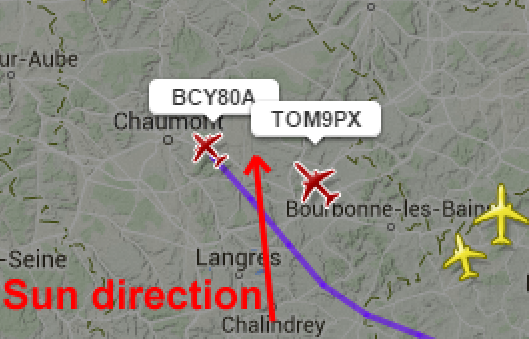 Trailblazer said:
In this case, both the plane and the trail look dark, but the trail is actually backlit, not frontlit.
Click to expand...

Thanks for the info. I'd say the trail in your photo is side-lit, that is, it does not scatter enough light to stand against a brighter background as it would do if the Sun was in front of you. Here is an example of a backlit trail from flickr:

I have a selection of flickr photos of bright planes leaving dark contrails that I'll post tomorrow. I also have my own photos taken in the described lighting conditions which I want to present in a separate post.
Last edited: Mar 28, 2015

Here are my old photos taken on June 24, 2008 from UAL955 B747-400 (LHR -> SFO) somewhere over Greenland at about local solar noon (the Sun is near its highest position for this latitude). A sister B747 in Air France livery goes by a parallel route on our north side: 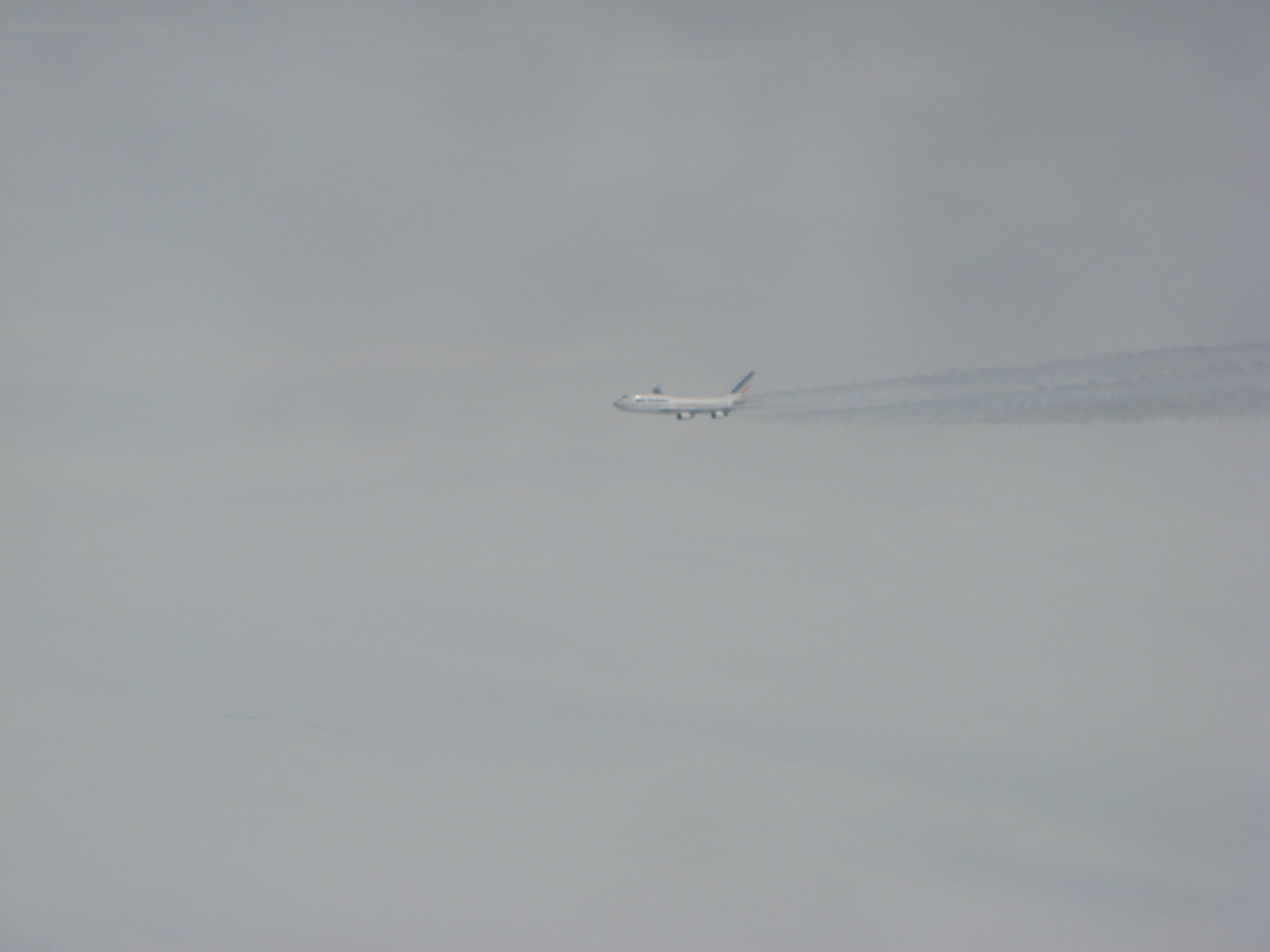 In a wider view the plane can be seen relative the horizon on the background of the Greenland ice sheet. The dark puffs in the foreground are the nascent contrails from our starboard engines: 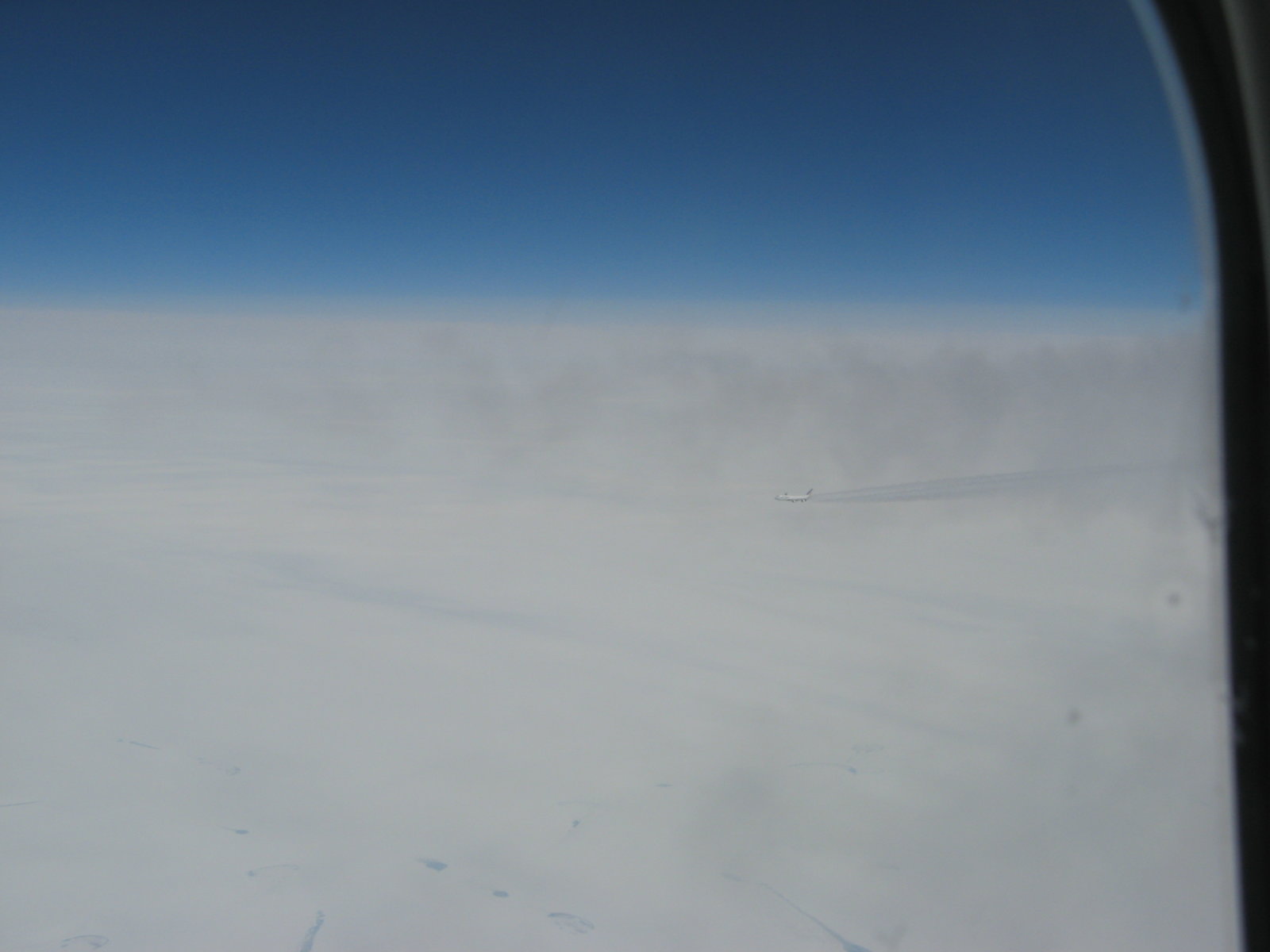 The contrail from our plane casts a dark shadow on the ground and a faint one on a thin cirrus layer, indicating the presence of light haze: 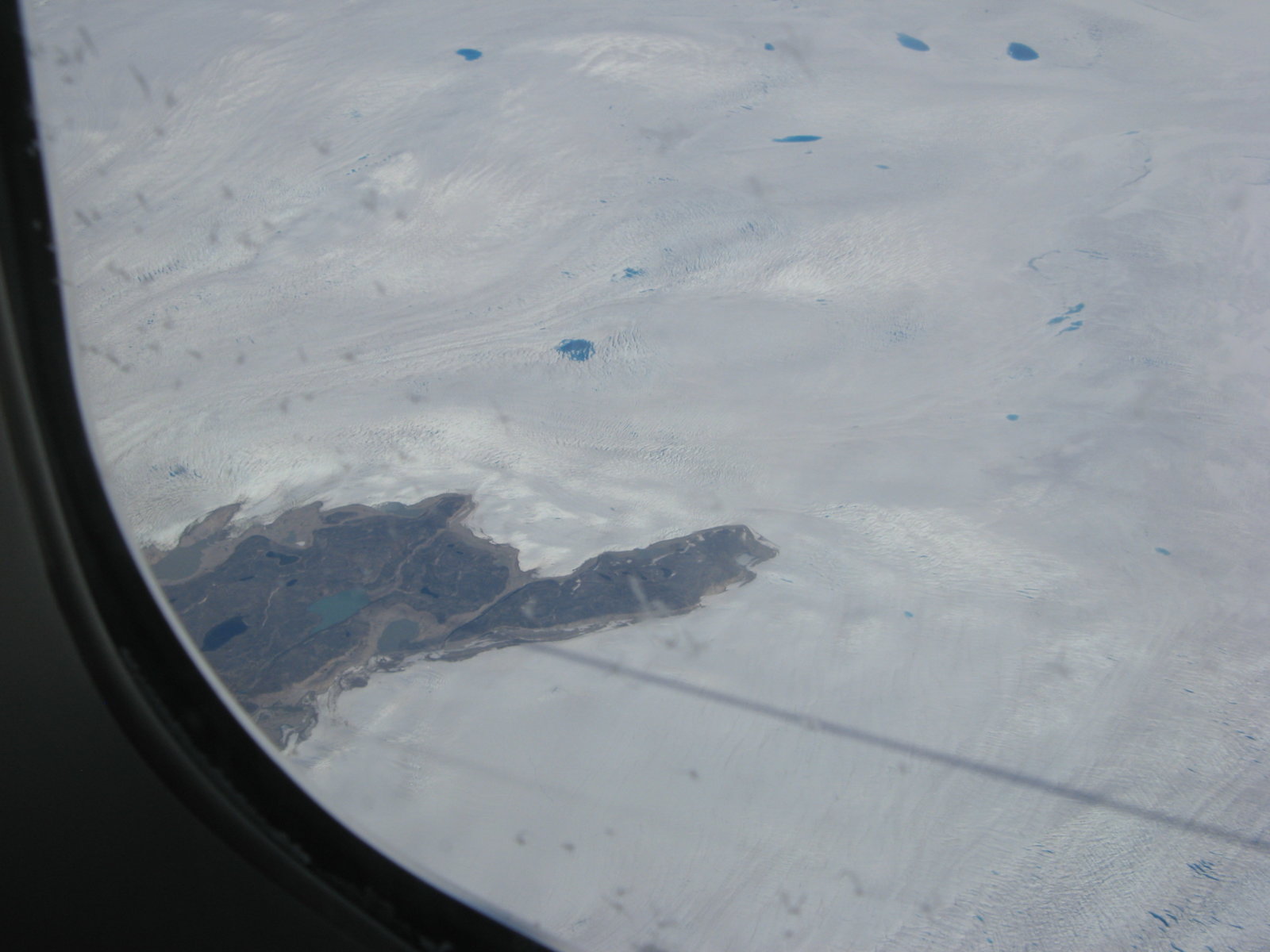 All these are original photos without any enhancements or other adjustments.
Last edited: Mar 29, 2015

Just to show that this phenomenon is not uncommon, here is a selection of flickr photos of bright planes leaving dark contrails sorted by year. Some images may have been digitally enhanced.

2006
The plane is hardly seen here, but it is a good example of how the contrail 'darkness' changes along the gradient of background brightness.

2010
This is my favourite, the best seen full-size

Note: the last two instagrams were posted on the same date in a batch of photos from different seasons.
Last edited: Mar 29, 2015
C

Hi Mick, I am listening to you and Joe Rogan on his podcast as I type this. I'm not one to go around preaching chemtrails but I do tend to believe they are real and my biggest hang up on this comes from being in an airplane where I watched one of these jets fly dangerously close to the plane I was in. It flew under the plane in the opposite direction we were heading, and at a slight angle. Looking at this jet from above it, during mid-day, what was coming out from behind it was dark in color, almost black. The nearby clouds where pure white. I can't wrap my head around why water vapor similar to a cloud would appear black from above. It's much easier to accept metals looking like that... It looks white from the ground looking up, but not from above looking down. Can you explain this please? I want to believe they aren't real because the implications of it are quite alarming. Thank you!

CalmlyCurious said:
Looking at this jet from above it, during mid-day, what was coming out from behind it was dark in color, almost black
Click to expand...

I've moved your post to this relevant thread. Check out the posts above as they should explain it.

CalmlyCurious said:
... this comes from being in an airplane where I watched one of these jets fly dangerously close to the plane I was in. It flew under the plane in the opposite direction we were heading, and at a slight angle.
Click to expand...

Was it really "dangerously close"? This sort of claim is a constant among chemtrail believers. In reality there is nothing remarkable about the likes of commercial airliners passing close to each other. You are likely seeing RVSM (Reduced Vertical Separation Minimum) in action. A separation of 1,000 feet under RVSM procedures can appear alarming to passengers but it perfectly standard in modern aviation.

RVSM was introduced in Russia about 5 years ago. See the airliner at approximately 30 seconds passing 1,000 feet above the filming airliner.


Sadly within the chemtrail believer community this perfectly routine proximity is exploited. See following video by Harold Saive where he claims. Note that the comments are disabled.


"This window camera captures a dangerously close pass by a rogue aircraft releasing persistent chemical trails that appear to be released out of direct proximity to the engine exhaust. This risky stunt manoeuvre would be a violation of FAA rules for traffic separation."

The video has the title


This is the original video where the clip was taken from. It shows perfectly routine proximity under modern aviation and air traffic control procedures.

Staff member
I saw a good example of this the other day, but sadly didn't have a camera on me. It was a cold, sunny, frosty morning and the steam from a boiler vent was catching the sun. Looking through the steam cloud towards the sun, the backlit steam appeared bright white. But looking at it from the other direction, with the sun behind me, the steam cloud looked dark grey against the blue sky, even though I was looking at the sunlit side of the cloud. Next time we have similar weather I'll try and get photos or a video.

Weird Object Freaks Out Airline Passengers
Published on March 23, 2018 in Alien/Earth/UFO/Unexplained by admin


“Just flew over Turky somewhere over Izmir and Khios Agean sea, heading into Athens around 4.30pm today we’d 21 March 2018. I was alerted by my wife 15 min before that she saw a missile so I was on high alert and ready.”

“It appears to be flying away at right angles from our commercial jet and somehow without either of us appearing to turn we end up almost following it. I wonder why the black smoke, why so close to our jet and why I could not see a source of the jet stream I could not see an airplane of any kind. Please KLK like share and follow. Regards Kerry” 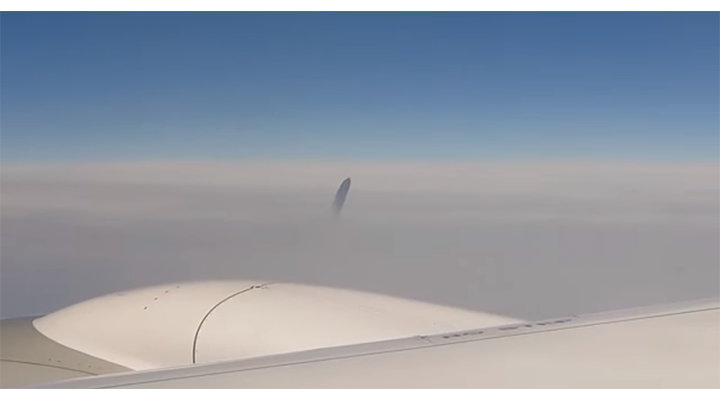 Source: https://www.youtube.com/watch?time_continue=36&v=LdXE6uL7Eec
You must log in or register to reply here.