It was inevitable that this was going to be a race characterized by rumors, bunk, lies, and disinformation. The closeness of the race makes fact-checking all the more important. Here are some resources that can be used to figure out what's real and what's not.

Tip: many of these sources will be viewed as being partisan, or being run by a "deep state." Where possible dig down and find the most neutral source (such as the state election commission), or a source that's more likely to be accepted by your friend.


GOOGLE - Google should be your first step. Because of the huge amount of attention on this subject, any disinformation is being very quickly exposed as such, often in great detail by multiple sources. Just type in a few key words regarding the subject, include the word "election" and you will often get multiple high-quality results immediately. For example, try "sharpie election" 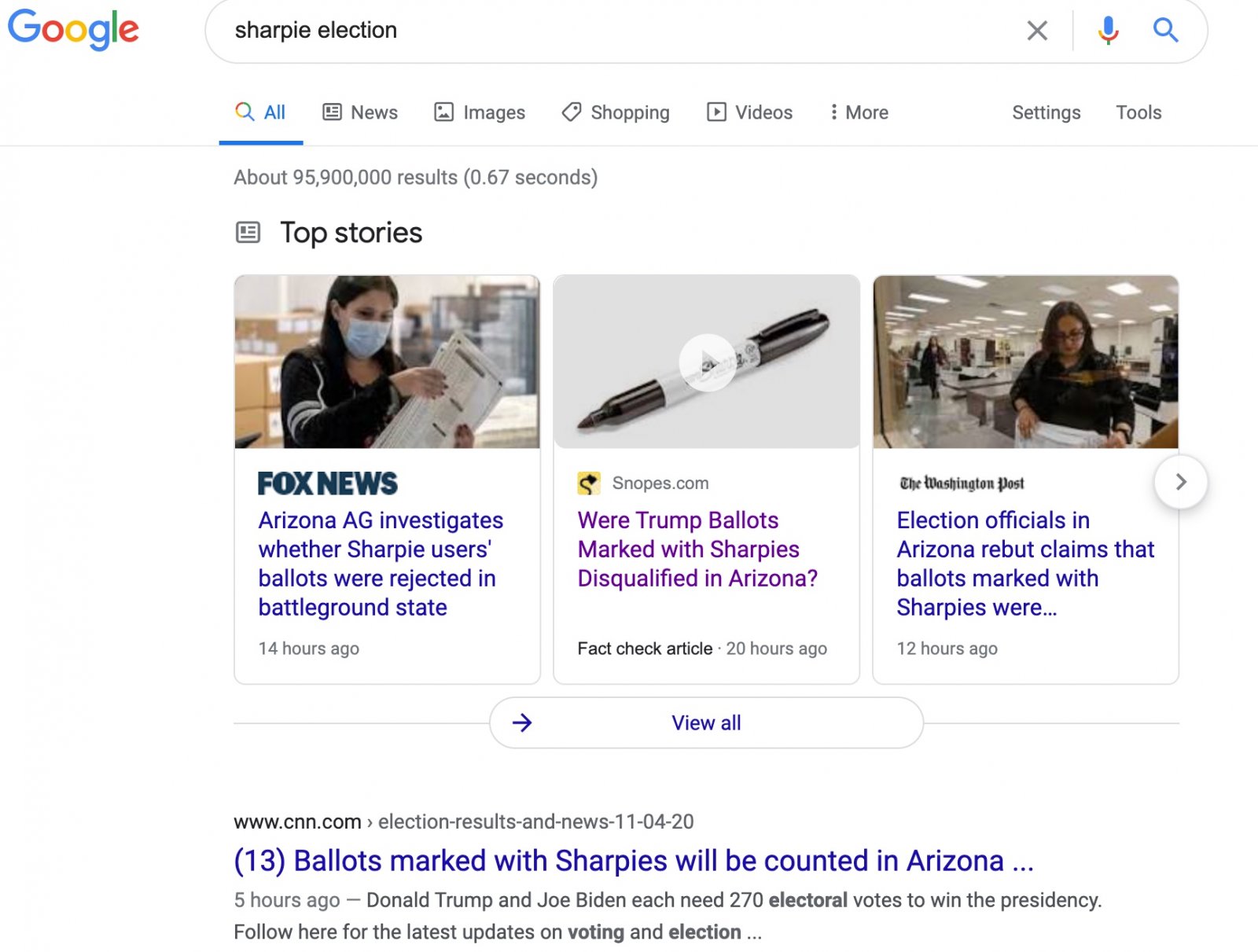 FIRST DRAFT NEWS - Up to the minute tracking of disinformation. Focussed heavily on the election now.

CISA.GOV - The Cyberstructure and Infrastructure Security Agency is a US Government agency, which may or may not make it more palatable. They have a detailed section on Election Security, which can supply very useful context. There's a sub-section on "rumors" that focuses on disinformation.

SNOPES.COM - While you might a "LOL Snopes" response, and they do lean left, they have a great fact-checking team who give understandable explanations with references. Here it's generally best to lead with the facts in the Snopes article and save the link for later. Quick lists on their Election Day Live Blog, and Election Aftermath Blog. Use their search, or browse the "Hot 50" list, which is pretty much all election right now.

POLITIFACT.COM - Again you'll get pushback because of the source. Focus on the verifiable facts. Cut-and-paste and use screenshots rather than just dropping links.

BBC.COM/NEWS - Foreign news sites might be seen as a little more neutral. The BBC has a few pages of fact-checks. (Nov 20)

Site-Specific Searches - Many outlets are hard to browse for specific lists. You can use Google to search a site, and curate your own list. This is useful if you want to use a particular source because you know it will be listened to. To do this add "site:" and the URL of the site, like factcheck site:https://www.usatoday.com

TIME LIMITED IMAGE SEARCHES - A useful way of finding current information is to do a Google image search limiting the result to the last 24 hours. During developing events this gives you an easily scannable set of relevant results. Here's how:


Live Updates: Snopes Coverage of 2020 U.S. Election Day
If the campaign season is any indication, misinformation is likely to fill social media feeds Tuesday. Get the facts here.

Mick West said:
POLITIFACT.COM - Again you'll get pushback because of the source.
Click to expand...


Don't post pictures that look like you immediately clicked on Snopes but bypassed Fox News. Believe it or not Fox News articles (vs. Tucker pundit show or Hannity pundit show) quite often do the debunking themselves. This is the first source you should check as it will be accepted the most. Then Brietbart or Blaze etc. Don't assume you can't find a debunk or explanation in a conservative source. I've always only used conservative sources on FB etc and i always find at least one that backs me up.

BBC is a joke and not even remotely neutral.


Politifact actually isn't 100% biased. Some articles do twist a convoluted explanation and then they mark it "false", but this only happens maybe 20-30% of the time. ex: they used experts to explain that California likely has only 2-4 electoral votes because of illegal immigrant census counts, vs the 6 electoral votes that was claimed. You can point such things out to your friends and they will trust the source much more.

But whatever you use, you cant just grab screen shots or cut and paste without providing a source link. We don't fall for those tactics.

edit add: and if it is family or friends you are arguing with, it would also help if you periodically debunk the Left bunk that's out there too. So you aren't just dismissed out of hand as being a rabid liberal shill.

Staff member
TIP: Use numbers and unique phrases to find explanations of images and memes. 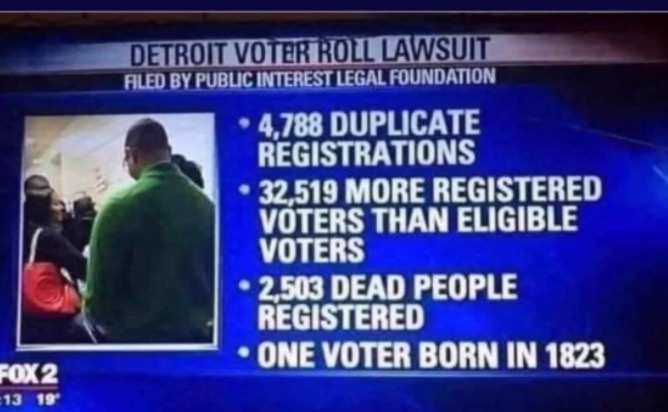 Specific 4-digit numbers can be searched for, and add a little text. So search for: 4,788 duplicate
https://www.google.com/search?q=4,788+duplicate

This gives us both a Snopes article and links to the original news stories. 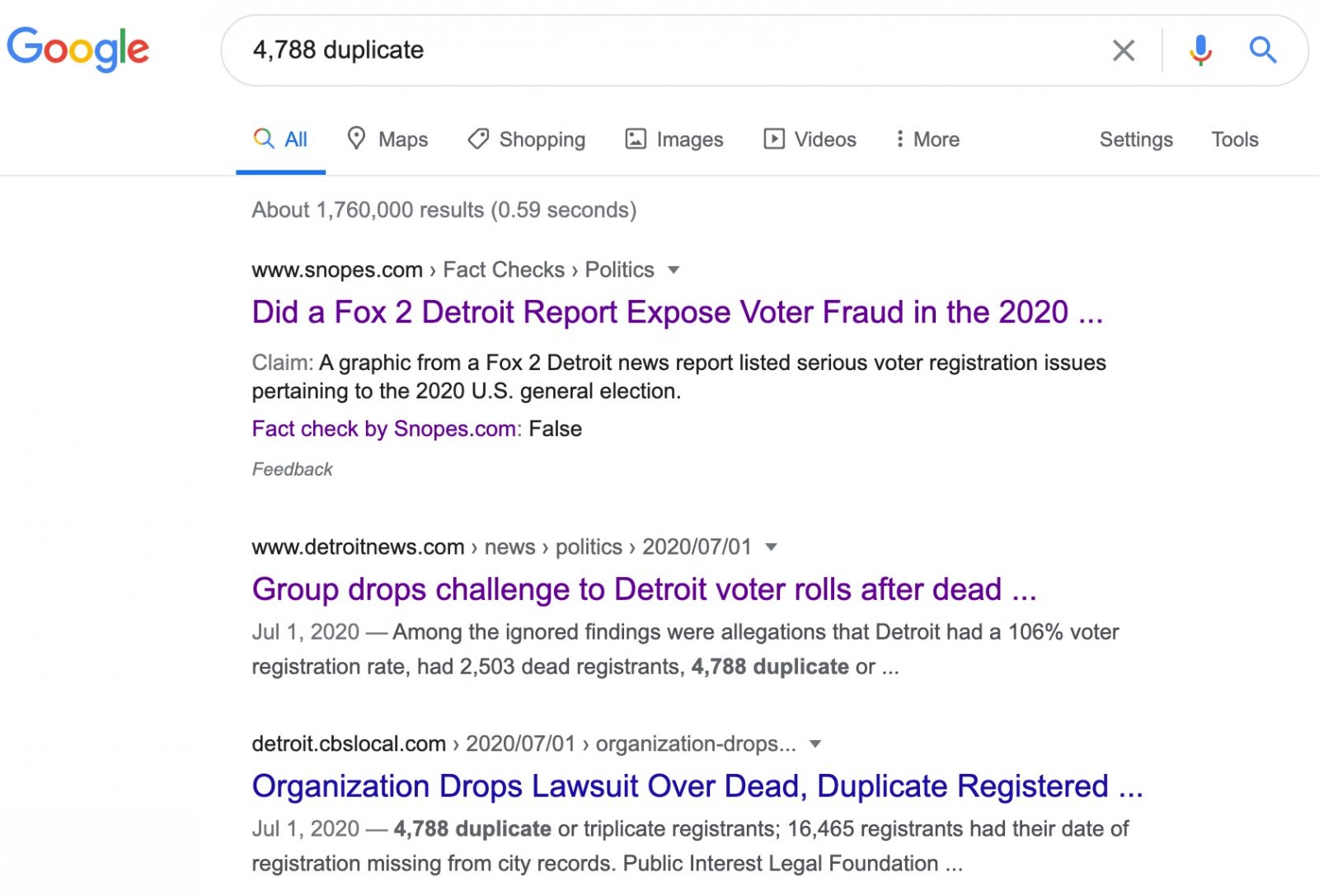 So here we can see the lawsuit was in 2019, and it was dropped in January 2020 after the problems were fixed.

“Defendants have taken action on the list of likely deceased registrants provided by the plaintiff,” according to a Monday motion to dismiss the suit. “Further, almost all of the duplicate registrations that Plaintiff brought to defendants’ attention have been corrected.”

Good post.
It's all too easy to google your way into loquacious meaningless posts/ideas.

oops.. i was gonna recommend the Wayback Machine to prove information was not recently faked. But when looking at the maricopa County FAQ on ballots (which now says Sharpies are fine)
i got this

the new wording first recorded by wayback Nov 2nd does say they updated their machines. I think they just never updated their FAQ, as the same one as above shows in 2018. Which, of course, i can suggest using Wayback as a source.

deirdre said:
oops.. i was gonna recommend the Wayback Machine to prove information was not recently faked. But when looking at the maricopa County FAQ on ballots (which now says Sharpies are fine)
i got this

the new wording first recorded by wayback Nov 2nd does say they updated their machines. I think they just never updated their FAQ, as the same one as above shows in 2018. Which, of course, i can suggest using Wayback as a source.
Click to expand...

That seems to be a case of "Our old machines and the old ballot layout had issues with Sharpies, which we've fixed and sharpies are now fine.
According to: https://www.usatoday.com/story/news...e-controversy-arizona-false-claim/6164820002/

The county said it preferred Sharpies at voting centers because they dry much quicker, while ballpoint ink can smudge onto optical readers or other ballots which can create issues.
Click to expand...

https://www.factcheck.org/2020/11/trumps-wild-baseless-claims-of-illegal-voting/
You must log in or register to reply here.