Let's please ignore William Tapley's religious views and his opinion that the flat earth theory is a "psyop" and just concentrate on his mathematical argument. Is it correct?

Is there anything wrong with his theoretical flat earth model and the equidistant shadows? A flat earther pointed out in the comments, that in Tapley's model, the sun is traversing the earth laterally - in a straight line. But in the flat earth model, while the sun does move in a plane parallel to the earth's surface, it is also following a circular path over the surface.

A question to our mathematicians here. Would that second factor - the circular motion - change or invalidate the argument? Would the shadows cast by a gnomon be equidistant over the course of the day?
Last edited: May 15, 2016

The FE model comes nowhere close to observed reality. So no, sundials will not work with the FE model.

With any Flat Earth model where the sun remains perpetually above the plane of the Earth, a sundial will suffer the same issue everything else does: The sun should never, ever set.

I'm eyeball mathing here, but a vertical pole's shadow should vary in a sinusoidal wave, peak when the sun is at the farthest point of its circle and trough when it's at the closest point. A sundial is slanted, but the same idea - the wave won't be quite as clean as a vertical pole but it'll still be a wave, nothing like what we actually see.


That's assuming real world physics (tested and retested beyond any responsible dissent - you did this stuff sixty times in your high school Earth Science class), though, which FE rejects without a viable alternative. Until a model explaining why the sun appears to pass below the plane of Earth can be provided we really have no idea what a sundial "should" do on a flat earth.


Edit:
Here's a sundial at the South Pole, where (visually) the sun remains above the plane of the horizon from September to March. There's very little variation in the length of the shadow, but in this FE model, this is how all sundials should work, just with more variation the farther from the pole you are.

Yes, I hadn't thought of that. Arctic/antarctic summer is the closest model we have of a flat earth system.

Z.W. Wolf said:
The shadows cast by a gnomon in the area outside the perimeter of the sun's orbit, what we call south, would see something very different. I'm still working out what.
Click to expand...

I'm no good at maths, so I'll leave the exact graphs and calculations to those who are. but looking at the pic in your post logically the shadow would always point away from the sun, so set up a sundial in South Africa (Cape Town) and as the sun traveled around its 'orbit' over the disc the cast shadow would sweep right to left (or left to right depending on the direction of travel) as the sun came closer, then once it reached the point in circle where is would, from the perspective of the observer, start to cross the sky in the other direction, the shadow would track back in the opposite direction, then repeat.

(Hope that makes sense, trying to do thought experiments at 3:40am after busy evening isn't easy. I know what would happen, but dunno if I'm describing it properly. )

I'm hand drawing some figures, but I can't find my protractor and I'm out of time for this evening anyway. But so far I think that in the north (inside the perimeter of the sun's orbit) the sundial would look very much like that sundial in Antarctica. The shadow cast by a gnomon would progress at an equal distance in equal time intervals - an equal distance each hour. (This is a 2-D figure. I haven't accounted for apparent elevation.)

But there would be a very different situation outside the perimeter of the sun's orbit. In other words what we call the southern hemisphere. I think (as you say) there would actually be a retrograde motion between dawn and mid morning, and then between mid afternoon and sunset. (Granting that there would be a dawn and sunset - which is asking a lot.)

[Can someone recommend some simple freeware to draw this figure? I need to draw a circle with equal arc segments on the circumference. Otherwise I'm going to have to buy a new protractor and draw by hand.]
Last edited: May 15, 2016

Z.W. Wolf said:
Yes, I hadn't thought of that. Arctic/antarctic summer is the closest model we have of a flat earth system.

Outside of the path, the shadow will "wobble." The top of the shadow will trace out a circle, just like the polar one, but the base of the post won't be inside the circle. The length will vary in such a way that plotting it over time will produce the wave pattern I mentioned in my last post.

Both are wrong.
The actual shadowlength as a function of time (hours after noon) [equinox -- march 21] looks like this 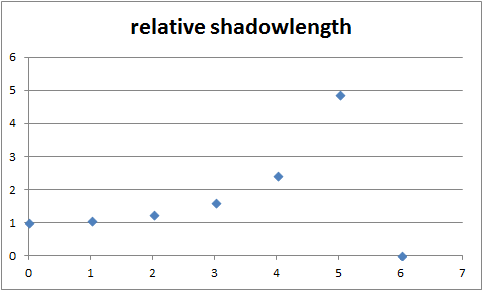 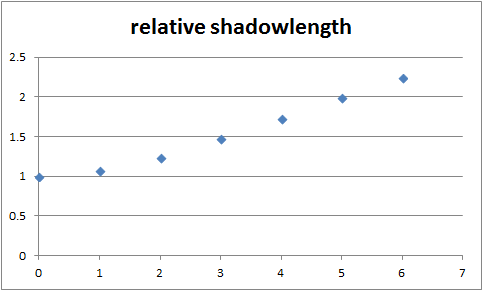 Yes, thank you for that.

I haven't properly defined terms, nor did Tapley. In his segment shot on the tennis court he is measuring both shadow length and the distance between the shadows cast at each hour, which is a confound. Each of those should be measured separately.

2. Distance between shadows cast by gnomon at equal time intervals. (Which is what a sundial uses to measure time of day.)


The sundial at the south pole seems to marking out equidistant distances at each hour - #2. And it is a full circle. Which would be a more or less close match to flat earth northern "hemisphere - inside the sun's orbit.

What I was saying is that in the area of the earth outside the sun's orbit (south), there will be a retrograde motion in #2 - the distance between shadows at equal time intervals. In the summer, the day would be more than 12 hours long, which would mean the sun would travel more than 180 degrees in its orbit. Which would mean that the shadows cast at dawn and sunset would be inside the shadows cast in midmorning and midafternoon. (Granting that "perspective" would cause a dawn or sunset.)

Even in a 12 hour day, 180 degrees of travel, there would be a retrograde motion both in the morning and afternoon. A southern sundial would be very odd looking. The numbers marking some morning hours would be outside the earliest hours of a summer day and ditto for afternoon.
Last edited: May 16, 2016

With regard to the distance between the shadows: the next graph shows for every hour after noon how much the shadow has moved from its "noon"-position. You can see that -- starting at noon ending at 6 PM (when in the real world the sun sets at march 21) -- in the FE model the angular distance between subsequent hourly casted shadows DEcreases (which means it is not constant), whereas with a real sundial the distance INcreases.

Here is what a sundial should look like (top view) in Cape Town (or Sydney) in the flat earth model. I calculated the shadow positions for march 21 again: 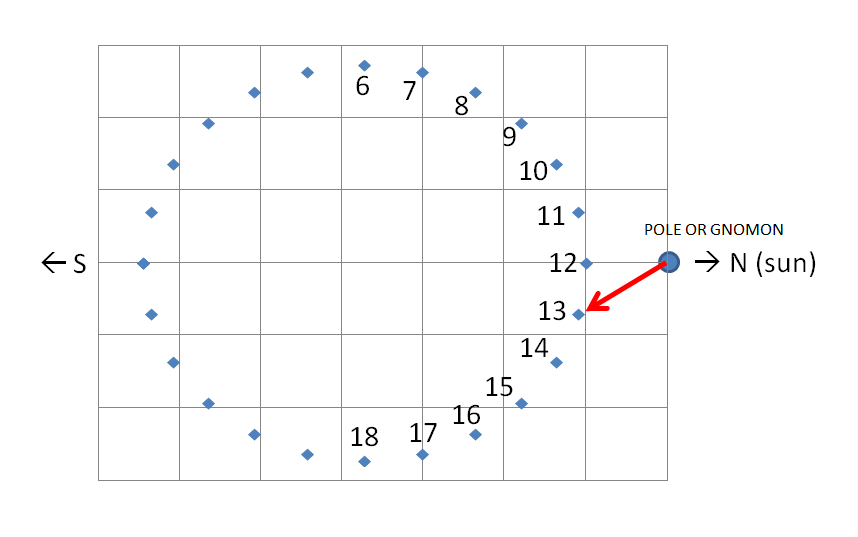 The red arrow shows the shadow for 13:00 h (1 PM).
The gnomon would be outside the time indications.

You have the gnomon outside of the arc, but it looks like you could invert the arc so that the gnomon would be on the inside and it would be equivalent. So is this FE earth sundial running clockwise or counterclockwise? It looks to me as if it would run clockwise.

Sundials in the southern hemisphere move counterclockwise in the real world.

A sundial in Melbourne 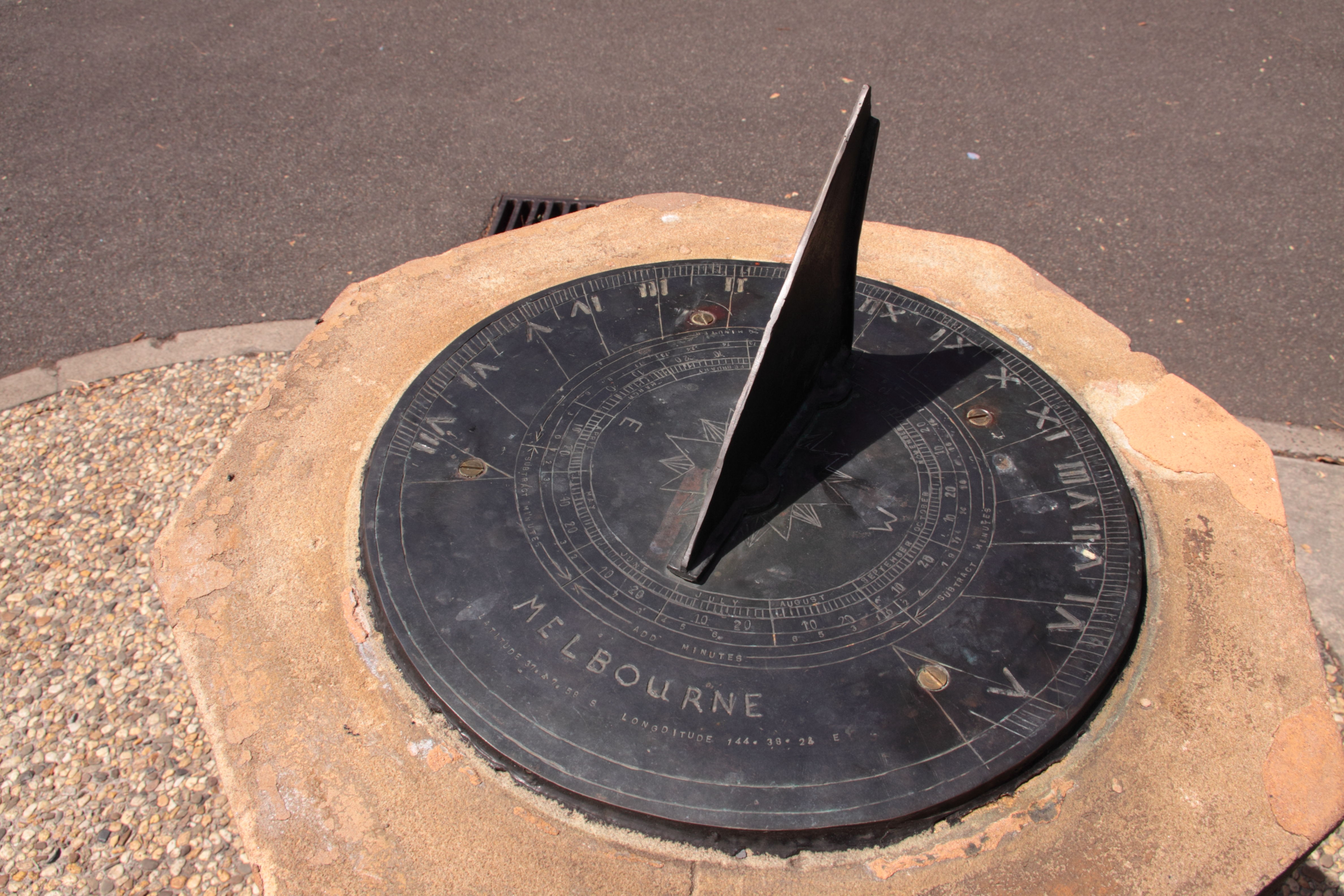 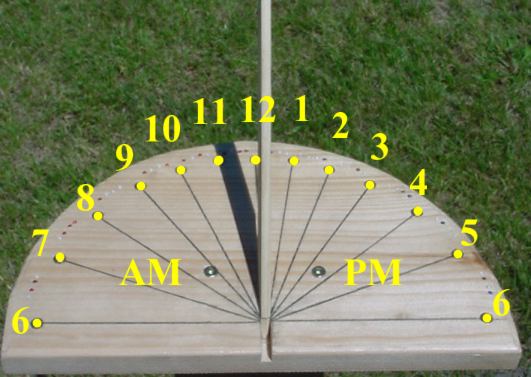 In the FE model the sun is always somewhere north of you when you are south of the tropic of capricorn. So the shadow of the gnomon will always point to a direction south of an east-west line; and the gnomon necessarily will stand outside the oval with the time indications, not somewhere inside, as you will normally see with a real-world sundial.
The FE sundial will indeed move clockwise there.

Let me add a picture of the situation: 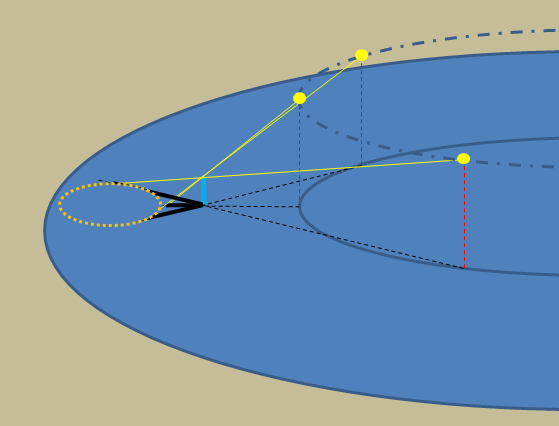 I understand. A proper 24 hour southern hemisphere sundial would be a circle with the gnomon to the north outside the circle.

But what would happen if you did try to use an arc with the open end facing north and the gnomon in the center of the arc - just as real life southern hemisphere sundials are designed?

Between 6 a.m. and 6 p.m. the shadow cast by the gnomon would travel across the arc counterclockwise; but between 6 p.m. and 6 a.m. the shadow would have a retrograde motion and travel across the arc clockwise. For a 24 hour sundial, you would need two rows of numbers; perhaps 6 a.m. to 6 p.m. on the outside row and 7 p.m. to 5 a.m. on the inside row. This is assuming light behaves normally and the sun were above the horizon 24 hours a day.

But let's grant the flat earth idea that "perspective" would somehow cause a sunrise and sunset.

On a summer day with 14 hours of daylight, the sun would have to be visible for more than 180 degrees of its orbit, and the retrograde clockwise motion would still be seen for two hours in the day. The sundial would still have to have a partial double row with 7 p.m. and 5 a.m. inboard of 6 p.m. and 6 a.m. respectively. A sundial like this one in Melbourne would be impossible.

It would be interesting to see members in the southern hemisphere test this. Sadly, we're only weeks away from the solstice.
Last edited: May 18, 2016 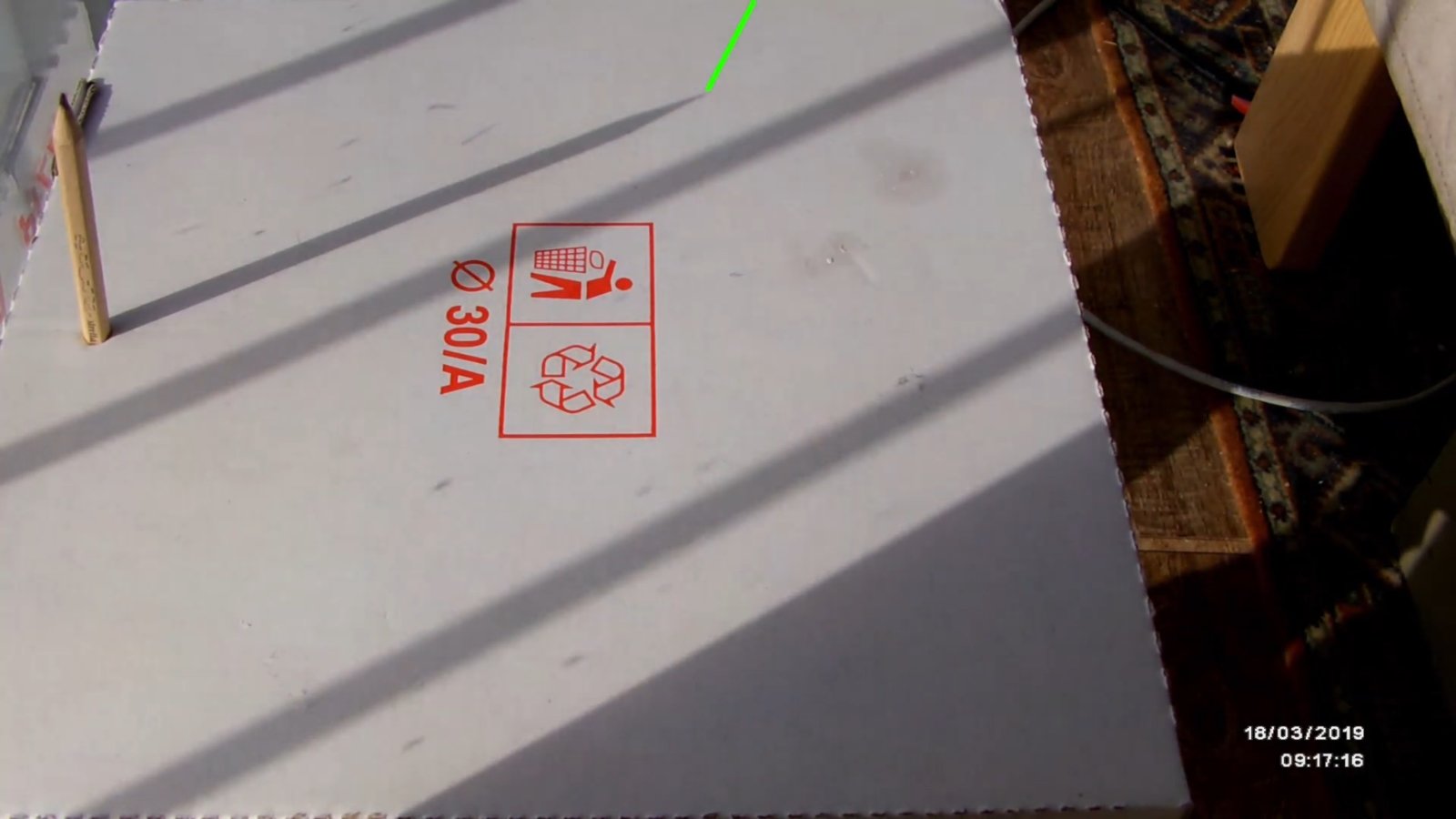 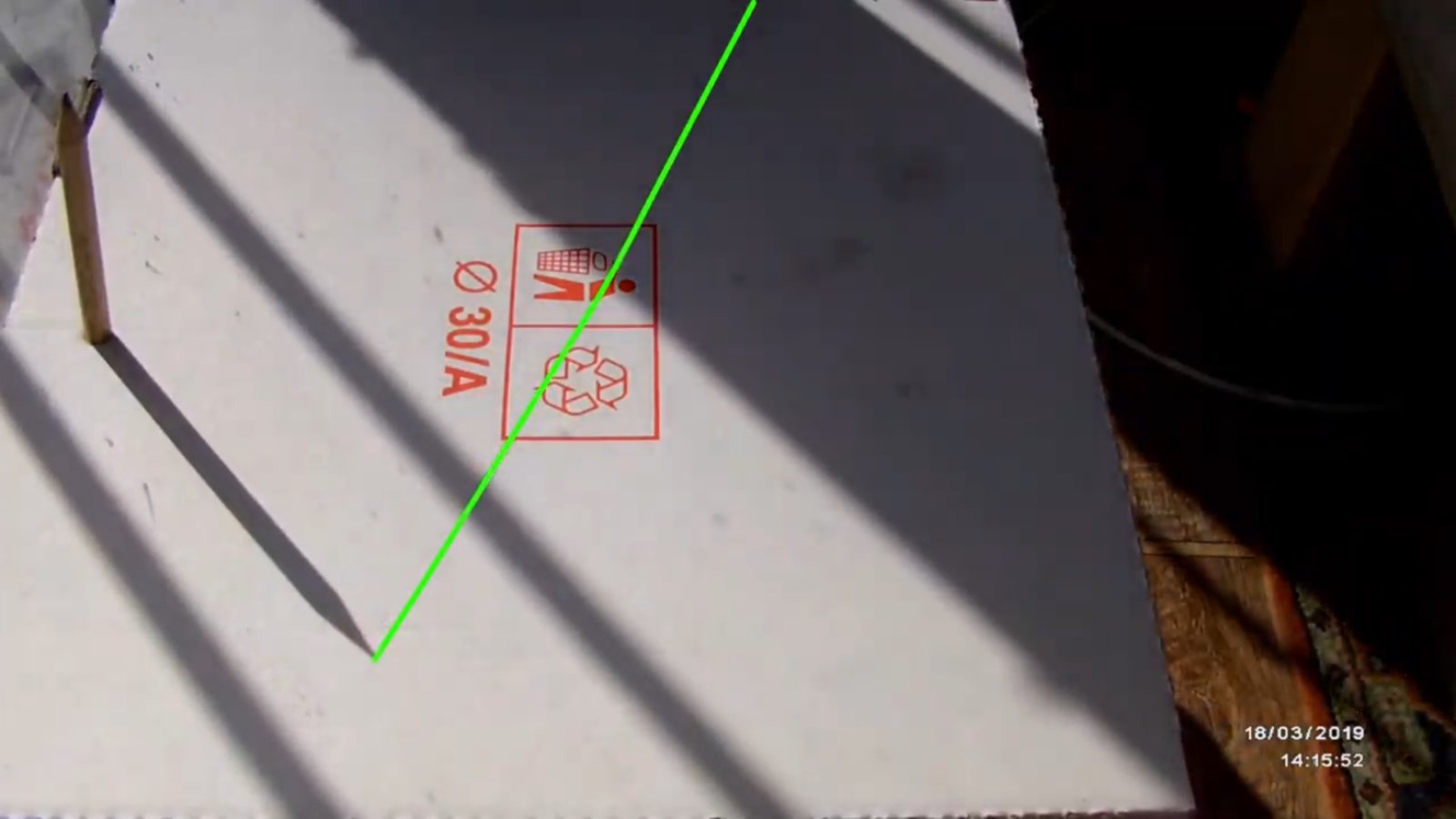 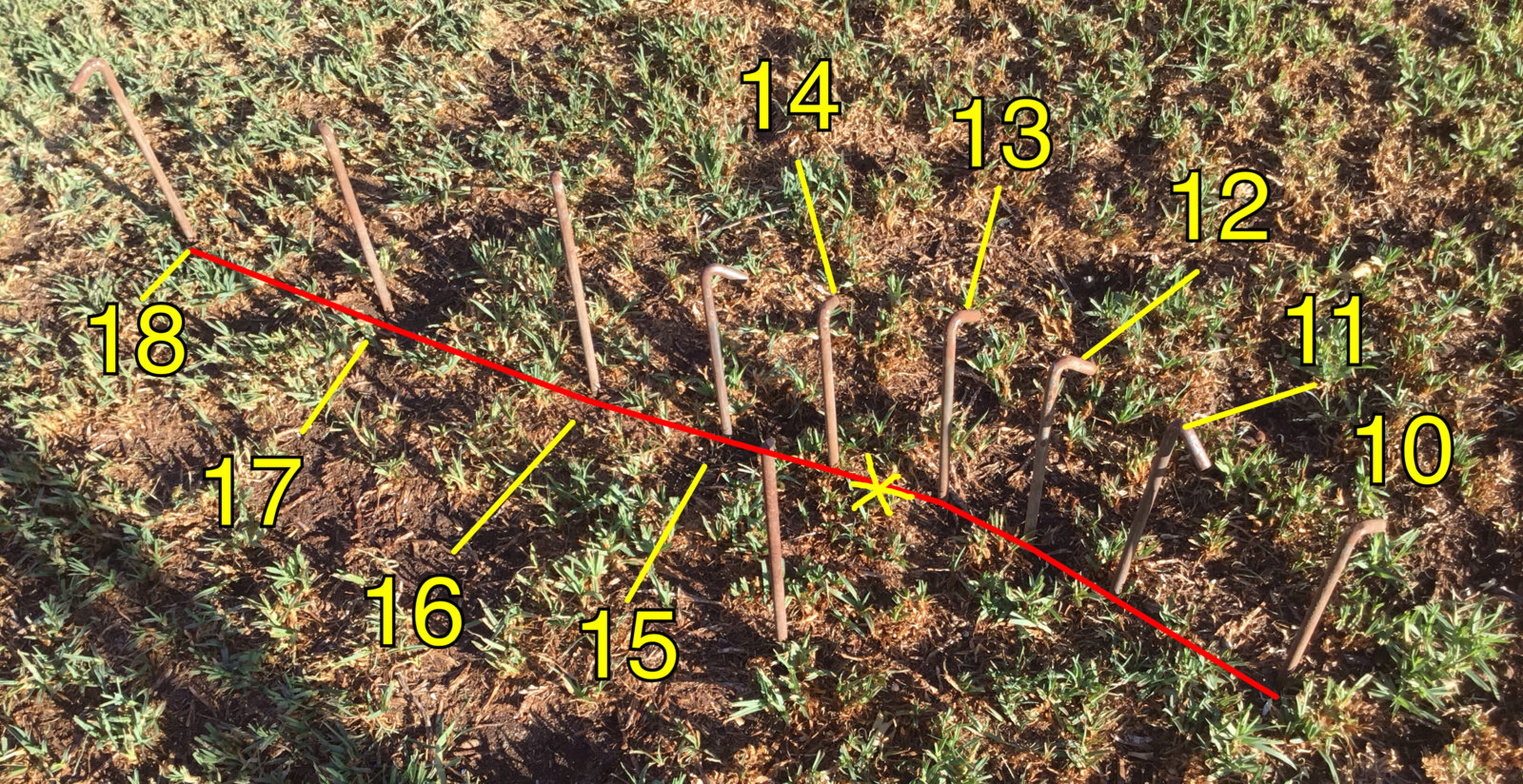