Thought I'd post a little debunking of weatherwar101 on the heels of a response he made to threats made by those he influences and an e-book he recently released for sale. One of the claims made by weatherwar101 is that there is not enough water vapor in the atmosphere to account for any of the weather we see. However, the water vapor loops he uses in his own videos clearly show water vapor drawn up from the Gulf of Mexico and/or the Atlantic Ocean. He also fails to utilize any relevant weather data other than radar and satellite images. Weatherwar101 claims there is no natural weather, says the perpetrators are committing crimes against humanity while focusing on deadly storm systems... yet he wonders why any of his followers would make threats towards those he deems to be guilty.


In his latest video he claims a three day outbreak of Mesoscale Convective Systems was manufactured and the water vapor came from ground based cloud machines of some kind. In previous videos he shows images of the large evaporative cooling towers used in power plants, images obviously taken on cold humid days when the water vapor condenses to form a large plume above the stack. He never tries to quantify the amount of water vapor that is allegedly generated in order to account for all the rainfall measured in these storm systems. I will do so in this post.

Over the course of three days, June 17, 18, and 19, a cutoff low was spinning over Idaho pulling cold air down from Canada across the continental divide to clash with warm moist air drawn up from the Gulf. A large Mesoscale Convective Complex developed on June 17, with a well defined cold-cloud-top footprint and precipitation footprint. According to the AHIPS precipitation analysis for June 17, 2014 there was an area of at least 300,000 km2 with rainfall exceeding 13 mm for a total volume of 4 km3. Within that zone was an area of around 150,000 km2 with at least 38 mm of rainfall, which is an additional 25 mm for an additional volume of 3.75 km3. A total of 7.75 cubic kilometers of rain fell in a 24h period from just one MCC. There are a trillion liters in a cubic kilometer so that means that 7,750,000,000,000 liters of rain fell. That's over 3 million olympic swimming pools full of water. 7.75 trillion liters is over 2 trillion gallons.

Nearly 8 trillion liters of water and that's not counting the water vapor required to bring the air mass to saturation so we can at least double that to account for all the water in all phases entrained in a single Mesoscale Convective Complex.

Weatherwar101 needs to account for at least 16,000,000,000,000 liters (4 trillion gallons) of water... more than 6,000,000 olympic swimming pools worth. Where is the hard evidence showing 16 trillion liters of water is being extracted or created in chemical reactions/combustion? He says his e-book can be understood by a child. Got news for ya ww101, it takes an understanding way way beyond a third grade level of comprehension to even begin to get a handle on all the complexities of the atmosphere.

The real problem is power. To boil that much water would require (fixed my previous math after finding a more direct formula that required less unit mixing) around 2,500,000,000 MWh, way more than half the US's total annual consumption.

Even to vaporize it without boiling smiply requires amounts of power that we as a species don't have the capacity to create all in one place like that.

You know, maybe if we spread it out over a large area and allowed the sun to evaporate it naturally. But... at that point, that's kind of what the ocean would have done anyway, and we just spent half the national defense budget creating a storm that would have happened for free.
Last edited: Jun 25, 2014

The real problem is power. To boil that much water would require (fixed my previous math after finding a more direct formula that required less unit mixing) around 2,500,000,000 MWh, way more than half the US's total annual consumption.

Even to vaporize it without boiling smiply requires amounts of power that we as a species don't have the capacity to create all in one place like that.

You know, maybe if we spread it out over a large area and allowed the sun to evaporate it naturally. But... at that point, that's kind of what the ocean would have done anyway, and we just spent half the national defense budget creating a storm that would have happened for free.
Click to expand...

Excellent points, totally agree. 16 trillion liters might be a drop in the ocean, but that much water would tie for the 22nd largest lake by volume in the US, Seneca Lake in upstate New York. That's also nearly the volume of Crater Lake in Oregon which is literally a mountain full of water, which I have seen and it is spectacular. It would take the Mississippi river 10 days to supply that much water. It's 8 times more volume than the largest lake in Nebraska, ground zero of the alleged ground based water vapor generation that day.

Speaking of what the ocean would have done anyway, atmospheric rivers transport the majority of water from the tropical/sub-tropical oceans to higher latitudes. A strong atmospheric river can transport up to 15 times the average flow of water at the mouth of the Mississippi or 3 times the amount of water that fell in 24 hours as precipitation from that one Mesoscale Convective Complex on June 17. All it takes is moisture from the Gulf of Mexico becoming entrained in the atmospheric circulation around a low pressure system.

I'm going to use the power of my StarShip to bring Jupiter's moon Europa over here, and place it in Earth orbit...there is enough water there to then "mine" for all of Earth's needs for thousands of years....oh, wait....I don't actually have a StarShip, nor a tractor beam technology to move celestial bodies around the Solar System (haven't been invented yet).

You need to heed the warning Weedwhacker:
All these worlds are yours.. Except Europa.

I saw this one too and wonder if he is trying to cover his own rear end should one of his looney tune followers get it in their heads to attack a weather office or other government facility? Maybe he doesn't advocate violence, but he is doing a lot to help promote the idea that the people of the world are being harmed by weather radar. Scary stuff.


Hevach said:
To boil that much water would require (fixed my previous math after finding a more direct formula that required less unit mixing) around 2,500,000,000 MWh, way more than half the US's total annual consumption.
Click to expand...

No, just ask Dutchsinse. A single WSR-88D that loses almost half of its transmitted power by the time it even reaches the antenna due to various path losses and attenuation; that only transmits for a fraction of the time it "listens", is capable of doing that.......

Here's one of WW101's followers handing out contact numbers for various weather offices in the vicinity:

And this one under Dutch's latest "tornado spawned by NEXRAD" post on FB is rather disturbing as well.....some very angry people, and those two are just stirring things up even further: 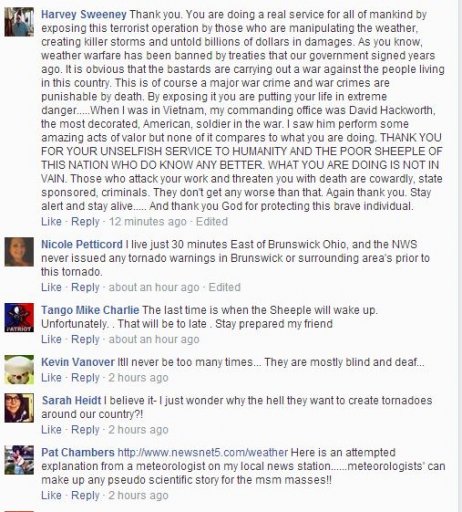 Between them and others there are a disturbing number of followers making comments like that, the angry mob as it were.

WW101 seems to have now incorporated the concept of atmospheric rivers into his narrative. Funny how he starts using that term right after it was mentioned in this thread. I don't think he has a very solid grasp on the concept though.


As I have repeatedly demonstrated, the only way there is any rain on this planet, is by sequentially feeding the "atmospheric river" with water vapor, until it can hold no more.

At which point it 'overflows', and water comes splashing down as from out a bucket.

Again his so called evidence amounts to nothing more than some radar and satellite loops. Other meteorological data shows where the moisture was coming from and why there were some heavy downpours in the northeast that day.

The LI product displayed is an atmospheric stability parameter which estimates the tendency of a low-level parcel of air (lowest 100 hPa) to continue to rise if it was 'lifted' to the middle of the atmosphere (500 hPa). The units are in degrees Celcius. A negative value indicates an unstable air mass, while a positive value implies a stable air mass. The value is color-coded with reds and yellows being the most unstable and blues and beiges more stable; clouds are represented as a gray color.

The CAPE product displayed is an atmospheric stability parameter for a given vertical thermodynamic profile, which indicates the amount of positive (buoyant) energy available to an idealized parcel, ascending from the Level of Free Convection (LFC) to the Equilibrium Level (EL). The larger the value (or the "positive-energy area" under the parcel curve on a thermodynamic diagram), the more unstable would the atmosphere be. A CAPE of 1500 J/kg would indicate a modestly unstable airmass.

So there are trillions of gallons of water available, broad scale wind patterns bringing tropical moisture northward into an unstable airmass with a lot of convective energy.

His usual response when met with such real scientific evidence is nothing more than hurl accusations of "psyops" and repeat more of the same pseudo-science nonsense.


Additionally, there are almost as many fake (and no purchase) psyop sock reviews of the ebook as are there are [sic] excellent verified purchase reviews now.

There will be video on this (in addition to a variety of other disinformation and obstruction efforts this week) as well.

Can't wait. The 5 star reviews outnumber the 1 star reviews by more than 2 to 1, btw. Most of the negative reviews focus on the obvious, Weatherwar101 does not understand even basic meteorology.

Four trillion gallons, that's 10x more than the 410 billion gallons used daily in the US for everything from irrigation to domestic use to thermoelectric power generation...[Info from the 2005 USGS water usage report - http://pubs.usgs.gov/circ/1344/]. WeatherWar101 focuses on thermoelectric power plants claiming their evaporation is the source of water vapor for most of the rain. However, electric plants only use about 201 billion gallons of that total, AND only about 3-5% is actually lost to evaporation, which is around 6 billion gallons. So just the evaporated water, converted into rainfall, would not even provide 1 cm of rainfall for state of Rhode Island and the entire US usage would only provide 1 cm of rainfall for an area about the size of Georgia.

In WW101's latest video titled "Geoengineering Proof: Water is Wet" he seems to think critics don't realize that water evaporates nor that evaporative cooling towers and other human activities add a bit of water vapor to the atmosphere. Of course those things are true and nobody has said otherwise. What he ignores is the quantifiable amount of anthropogenic water vapor in the atmosphere compared to the amount of water that evaporates from the oceans which cover about 2/3 of the Earth's surface. While those videos he uses of power plant exhaust and cooling towers look dramatic on a cold winters night, the reality is that human activities contribute such a miniscule amount of water vapor to the atmosphere (something like 0.001% of total water vapor is anthropogenic) that as the EPA's evaluation of greenhouse gases states...


Water vapor is not tracked in this indicator, as it is generally accepted that human activities have not increased the concentration of water vapor in the atmosphere.


What does water being wet have to do with your goofy-ass babytown frolics.