Claim: Wolfgang Halbig continues to claim the United Way of Danbury Connecticut, which helps Newtown with collection of donations, keeps refusing to answer his FOIA requests or let him view documents at their office.

Wolfgang Halbig says:
[bunk]
May 12 at 1:05pm ·
Despite the fact that the law requires that any 501(c)(3) non-profit grant access to the public to inspect their financial records, United Way employees advise the police "we are not letting anyone in the building" https://www.facebook.com/SandyHookJustice/posts/800354579999349http://archive.today/pldAU

We were confronted by 8 police units from the Danbury Police Department when simply trying to enter the UNited Way Western Ct in Danbury .
The federal laws by the IRS are crystal clear but it made NO difference to law enforcement. https://www.facebook.com/SandyHookJustice/posts/800023320032475http://archive.today/rRKuh

Take a look on how they stopped me from looking at the IRS records of the United Way Western Ct since per IRS rules anyone can inspect those documents. https://www.facebook.com/SandyHookJustice/posts/798259180208889http://archive.today/bI5vH
[/bunk]
Video of Wolfgang Halbig 's trip to the United Way office in Danbury
note: at 2:24 Halbig thanks police officers for issuing him a $150 ticket. I called the Danbury Police Department to find out if it was for trespassing or harassment, but they told me that information is not public.

However United Way has no obligation to let him in the building, or provide him with physical copies, because:

Organizations that make their materials widely available through publication on the Internet do not have to provide copies;
if the Internal Revenue Service determines that the organization is being subjected to a

harassment campaign, copies do not have to be provided;
and 501(c)(3) organizations not classified as private
foundations are not required to publicly disclose the list of names and addresses of individual contributors and may block out that section of Form 990 and other materials for public viewing
http://www.ctnonprofits.org/ctnonprofits/sites/default/files/fckeditor/file/resources/publications/PrinciplesAndPractices_Web.pdf page 8

Earlier Tuesday, a group of Halbig's supporters visited the Danbury offices of the
United Way of Western Connecticut, demanding records about the use of charitable funds collected on behalf of the Sandy Hook community. Chief Executive Officer Kim Morgan said the group was told that all financial documents for the non-profit agency can be found online.

"I would prefer not to give them a voice in the mainstream media, and to reassure the public that all of our financial documents are online and can be accessed by anyone,'' Morgan said. http://www.newstimes.com/local/article/Newtown-school-board-greets-Sandy-Hook-skeptics-5458442.php#photo-6267949

How to file a FOIA appeal in Connecticut.

There is no form for filing an appeal with the Freedom of Information Commission. Simply write a letter and send, fax or e-mail it to the Freedom of Information Commission, 18-20 Trinity Street, Hartford, Ct. 06106 (Email: foi@ct.gov; Fax: 860-566-6474). The letter must contain all the relevant facts pertaining to the alleged denial of access to a public meeting or to public records. Complete contact information (name, address, phone number) for both the complainant and respondents must be provided. An appeal must be filed with the Commission within 30 days of the alleged violation, except when the appeal concerns an unnoticed or secret meeting. In that case, the appeal must be filed within 30 days after the person filing the appeal receives notice in fact that such meeting was held. Consult the FOI statutes or contact the FOI staff if you need to confirm that your claim is indeed a violation of the Freedom of Information Act. http://www.ct.gov/foi/cwp/view.asp?a=3171&Q=531378#AppealCommission

NEWTOWN -- The Newtown-Sandy Hook Community Foundation Inc., which controls more than $11 million that is the largest fund formed in the wake of the Dec. 14 school shootings, has increased its initial release to the 40 most affected families to $7.7 million....

Attorney Kenneth Feinberg, a nationally-recognized expert in managing relief funds created after tragedies and disasters, will serve as a special adviser, the foundation said in a press release...

The Foundation is very pleased that Judge Nevas has agreed to lead this distribution committee," said Dr. Charles Herrick, a member of the foundation's board of directors. "Throughout his distinguished career Judge Nevas has been known for his thoughtfulness, fairness and integrity....

Content from external source
Last edited by a moderator: May 14, 2014

Wolfgang halbig continues to lie to his followers. He has recently deleted my friends post from his page. 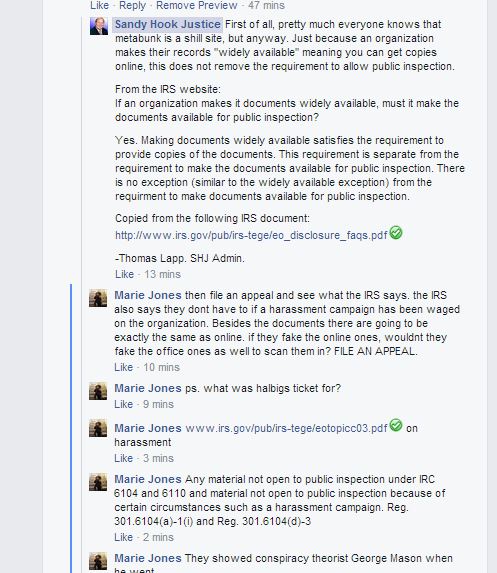 IRS FOIA harassment Law and some examples of Wolfgang calling for harassment campaigns:


Applications A tax-exempt organization is not required to disclose the following excepted from application materials:

disclosure · An exemption application for tax exemption filed by an organization that has not yet been recognized; · Any application for tax exemption the organization did not have on hand as of July 15, 1987; Reg. 301.6104(d)-3(b)(3)(iii)(A)-(C) · Any material not open to public inspection under IRC 6104 and 6110 and material not open to public inspection because of certain circumstances such as a harassment campaign.

copies of its documents upon request. The regulations suggest that one indicator is not determinative of a harassment campaign. See example 2 in Reg. 301.6104(d)-3(f).

Examples of Halbig calling his followers to flood agencies with FOIA requests:


Please write and call these non-profits and demand their financial records especially the board minutes showing how they were going to spend those millions and millions of solicited donor funds.


http://archive.today/VVuw0 Newtown School Board et al
Please write and call these non-profits and demand their financial records especially the board minutes showing how they were going to spend those millions and millions of solicited donor funds.
It will take all of us in seeking the truth

http://archive.today/VZ5QA The Newtown Bee
I am asking all my friends to contact this editor Mr. Clark and request copies of those pictures since you are not Wolfgang W Halbig. Please read their policy that I have provided you it shows that you can purchase those pictures.

Photographs: Suggestions for photographs should be directed to the Editor at 203-426-3141 or by e-mailing editor@thebee.com. Reprints of photos taken by staff photographers are available to the public through The Bee's online photo galleries

http://archive.today/btLKg The Connecticut State Police
Those of you who are looking to file a FOIA request to the CT State Police can use this template as a starting point. Just copy and paste into Word or Notepad, fill it out, print it, and mail it.
Thanks to Tonya G. for this template.
This is the form I found online Connecticut Sample FOIA Request
[Your Name]
[Street Address]
[City, ST ZIP Code]

http://archive.today/nMGe1 The "Porta-Potty Company"
Be careful if you check them out you will get a call from the Southbury, Ct Police Department as I did for just asking questions.
Our Freedom of Speech is also now being attacked

What time are Newtown schools in session?