Three missing links.
The relevant paragraph is below, so you can easily test the three links:
““As examples,in 2002, Consulting Engineering Services recommended to the school district that SHES be “worked on in 2010 over a nine-month period” to upgrade and renovate its heating and ventilation system at a cost of $4.5million. Two years later,in 2004, the Newtown Board of Education was told “there were serious problems with the Sandy Hook elementary school roof.” Four years later,in 2008, there was yet more bad news: SHES was contaminated with asbestos. (Remember that 2008 date.)” https://archive.is/GIMVB [/Bunk]

It is being recommended by CES to be worked on in 2010 over a nine-month period. It is estimated to cost $4.5 million for heating and ventilation and $400,000 for air conditioning.

No sooner than the board on Tuesday had heard a final report from the Public Building Committee about the completion of the repair project to the high school roof, it received the bad news that there were serious problems with the Sandy Hook elementary school roof.

The asbestos levels in Newtown schools pose no threat to the health or safety of those using the schools, according to Superintendent John Reed. The areas in the schools where there is evidence of asbestos – the ceiling above the high school pool, areas of the upstairs floor of the Middle School A wing and the girls’ and boys’ locker rooms, are also considered acceptable and safe

we know this 3rd link is the right one, even though it does not mention SHE because the popup web address (see tutorial below) says 100686

I'm really only posting this trivial claim as an excellant example of how people who don't know HOW to research items online, maybe should ask for help before blogging libel claims.
Tutorial:


Cindoretta,
Online sources, newspapers, snopes etc often MOVE articles around. When they move an article to a new location within their site, the web address changes.

The first thing you want to try, when looking for links that no longer work, is you take any quoted parts you see for ex: link 1 says "worked on in 2010 over a nine-month period". You go TO the source, in this case "newtownbee.com" and you paste the quote into the SEARCH window.

The third "link" in your FOTM's article has no direct quote.
Now I could still use the Newtown Bee search function and search for " 2008 asbestos Sandy Hook Elementary". But in this case it would not work because the FOTM's article is lying.

Or ... if you put your mouse over the link you want, you will see the web address 'popup' in your lower left corner of your screen. For the 3rd "missing " link, the pop up says "newtownbee.com/news/100686". 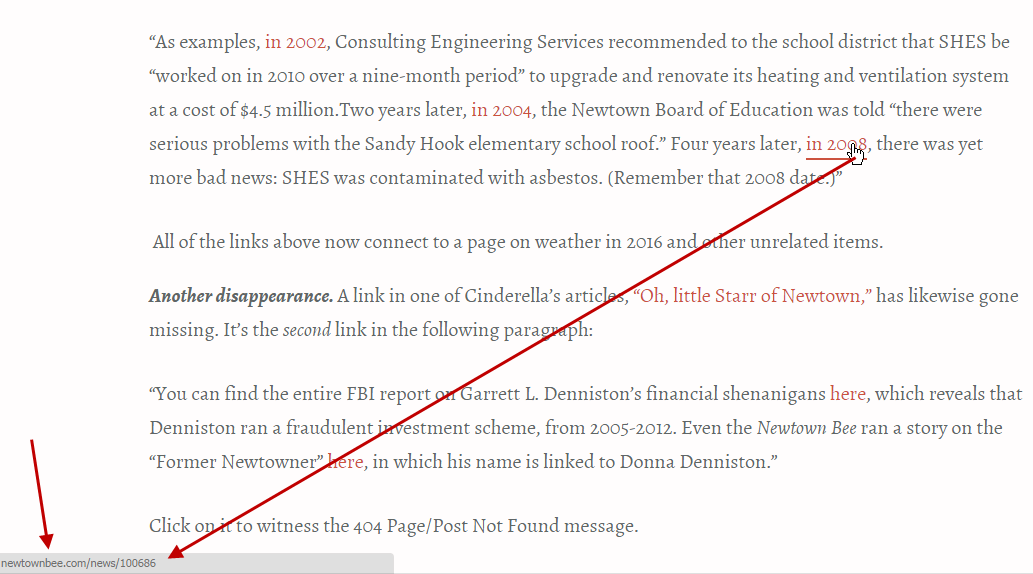 I then wrote down this pop up address and pasted into Google Search, which brought up a few sites that DID have direct quotes from the article. I copied the quotes from these sites and pasted them into the Newtown Bee's search function.
et voila.
Last edited: Mar 9, 2016

oh and i guess i should link the "Oh. Little Starr of Newtown" link in my screen shot even though Donna Denniston has absolutely nothing to do with Sandy Hook Elementary.

I didn't know about that (the numbers at the end of the web address) I often wonder why when I'm researching something the link doesn't go anywhere when clearly there is something there in the results.

JRBids said:
I didn't know about that (the numbers at the end of the web address) I often wonder why when I'm researching something the link doesn't go anywhere when clearly there is something there in the results.
Click to expand...

This is a tad OT, but since it relates to the "tutorial aspect":
Sites DO at times remove old content. Or you might catch them at a time where they are "updating" their site etc.

And some sites do prevent archive robots from archiving their content. But in general, you can usually find links that no longer work by using The Wayback Machine- if you are just looking to read the content of the link, like most people are. 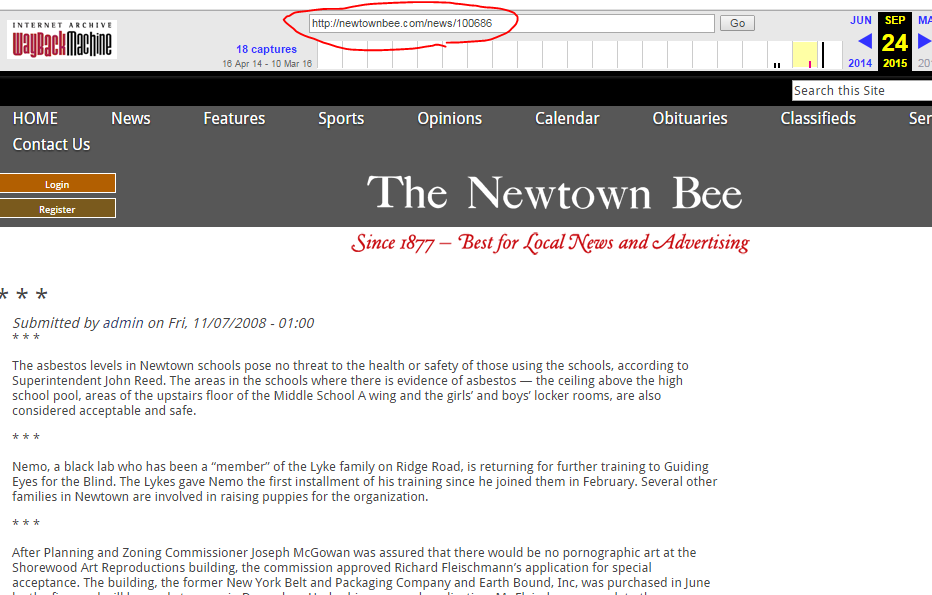 Debunked: The Claim That the Envelope Was Found in the Lanza Home

Debunked: Sandy Hook Residents got their houses for free