Came across a claim on Instagram that the United Nations created a "New World Order" website for what proponents believe is propaganda for the NWO.
The website (Which turns out is NOT a UN website or initiative.) in question can be accessed below at. 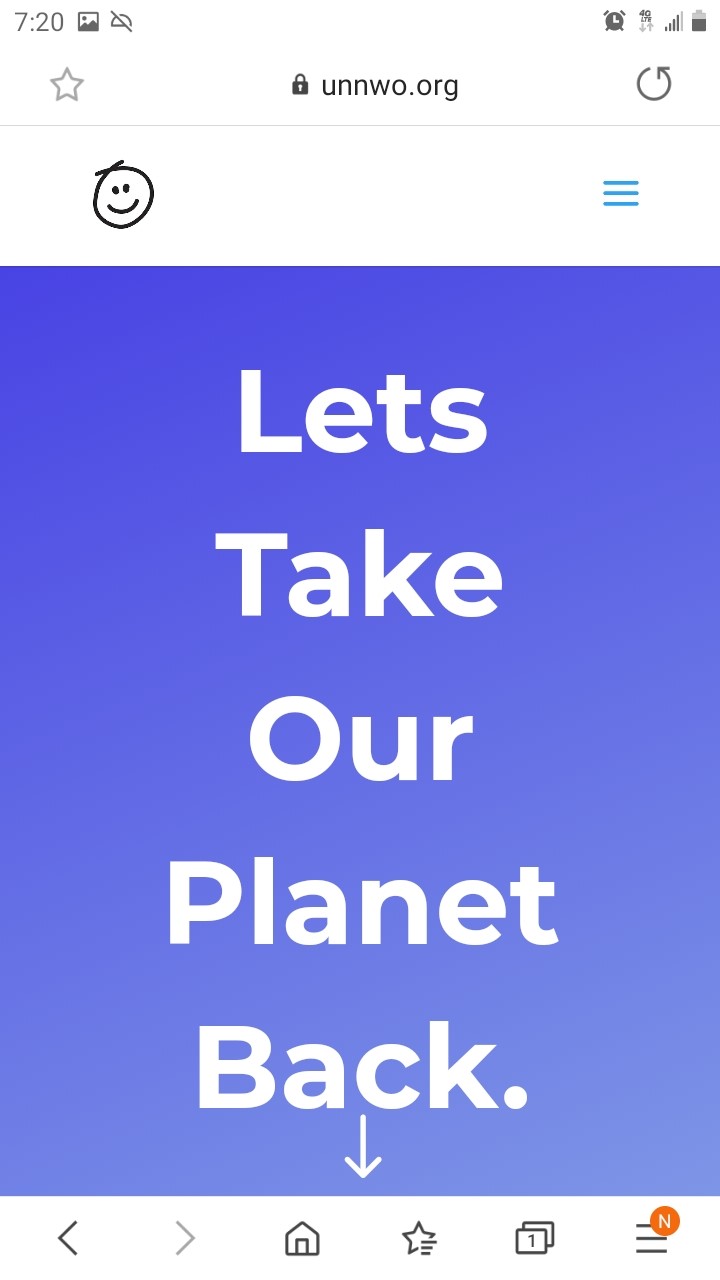 The website takes you to a colorful smiley page with really no information at all whatsoever. The "About" "Initiatives" and "#10BillionHappy" tabs at the top don't go to anything. Clearly the site isn't complete at all let alone has anything conspicuous or alarming on it. Even more importantly is that the website is in fact not associated with the United Nations at all addressed in a news letter on the UN's website.
https://www.un.org/press/en/2020/db200527.doc.htm

And just to note that over the weekend, I’ve been receiving a lot of questions from different journalists about a website for a something called the United Nations New World Order project. I just want to state and say this very clearly that this project and website is in no way sanctioned by the United Nations.

Ok so it's not a UN website. (The logic of a totalitarian effort having a cute marketing plan doesn't quite make sense anyways does it?)
However, what is this New World Order Project website and effort then? Just a fake site for scares? An NGO? Basically it turns out to be a site for a lobbying/activist group of the same name co founded by the grandson of Nelson Mandela. Ndaba Mandela, who also happens to be a UN AIDS Global Ambassador. Along with a Jayme Illien of Illien Global, a public benefit company. The name is misleading in it's UN reference but essentially it's purpose is referenced in an article below.


As my grandad said famously, 'It always seems impossible until it's done.' Let us unite and work together to win this global fight, and to achieve the happiness, wellbeing, and freedom of all life on earth," said Ndaba Mandela, UNAIDS Global Ambassador, Co founder of the United Nations New World Order Project, and Chairman of the Mandela Institute for Humanity.

So there you have it. At it's best this www.unnwo.org site is just for a group that's apparently supposed to promote sustainable development, global happiness, and well being in parallel to certain already existing UN development initiatives. The site is not associated with the United Nations at all though. At it's worst, the site could have just been a joke to promote anti-UN/New World Order conspiracy theories or to troll those who subscribe to those theories. No worries.
Last edited: Jul 21, 2020

This is very strange indeed. I don't know why, but I just went deep down the rabbit hole with this one & I think this website was actually created by someone trying to make money as a consultant.

You can look up exactly what technology they built the website with at builtwith.com - in this case, it's a wordpress site with a Divi template. https://builtwith.com/unnwo.org

I looked up some backlinks, to see if people are actually referencing any content on the site. Lo and behold it's almost entirely conspiracy theory posts & websites linking to the landing page. https://ahrefs.com/backlink-checker

Then of course, there's archive.org. We can see what this website looked like before its February 2020 re-branding. It is certainly very weird without context, almost like conspiracy bait:

Happytalism
Happytalism is a new economic paradigm which places happiness and freedom at the center of human development models, systems, and all life.

UNIDOHappiness
Founded in 2012, the United Nations International Day of Happiness recognizes happiness as a fundamental human right and goal, and is celebrated every March 20, forever.


Looking up Happytalism & UnidoHappiness (which are both totally unaffiliated with the UN) leads to an individual founder named Jayme Illien, who is referenced in the PRNewswire press release mentioned in derrick's post. Looking up this individual, he claims to been a part of the UN adoption of the International Day of Happiness (though I can not verify if he actually was), and positions himself in the NGO / Consulting space around using 'Happiness' as an economic measure. It also seems like is a big self-promoter and has paid to have press releases published in globe newswire (which have been aggregated to the Associated Press among other places). What is crazy about these press releases is that they are all just self-flattering and made up. For example:

Here is the actual guest list: https://www.epsusa.org/events/1117conf/attheturningpoint.html . If he was at the conference, it was not as a speaker. Why put out a misleading press release? This is a pattern he repeated again the next year:


Philadelphia, Pennsylvania, March 20, 2018 (GLOBE NEWSWIRE) -- Just over two months ago, on January 6, 2018. United Nations International Day of Happiness (UNIDOHappiness) founder Jayme Illien celebrated the 2018 new “Year of Global Happiness” with a global call to action to achieve happiness for all ten billion members of the global human family by 2050.

Illien’s bold and ambitious call to advance global happiness on behalf of all ten billion human beings projected to live on planet Earth by 2050, was launched at the American Economic Association annual conference, and the Economists for Peace and Security annual special dinner held January 6, 2018 celebrating world renowned economist James Galbraith, Chairman of Economists for Peace and Security from 1996-2016.

Again, he just put out a press release claiming he launched something at an event he was not a speaker at: https://www.epsusa.org/events/aea.htm

His old Twitter bio also described him as the CEO of UNNewWorldOrder, a suspended account (probably for impersonation).

To cap this all off, it appears Jayme had for a brief time an utterly baffling & ridiculous wikipedia page, painting him as a thought leader solving humanity's greatest crises, a former CIA agent, and quite literally, the CEO of the UN's New World Order Project. I'm not sure who created this page, but it seems to full of references to his bogus media hits that it seems like it came from him or someone close to him.


Illien is a global activist, economist, and political theorist who is CEO of the United Nations New World Order Project launched in 2008, with co founder Ndaba Mandela, grandson of Nelson Mandela, former president of South Africa, who led the revolution and movement that ended apartheid, and "gave birth to a new nation, a new political party, and a new era of democratic governance in South Africa, and the African Continent."[4][5]


I think what happened is, this guy has been trying to sell his consulting services to non-profits and NGOs for years, and he deliberately registered this website to embellish his resume, similar to what he's been doing with press releases for years. This is more likely now that he's since distanced himself from claiming to be the CEO.

I'm not sure whether he knew he would attract the attention of people paranoid about the "New World Order" conspiracies, but if you play with fire you're going to get burned.
Last edited: Jul 22, 2020

Very nice addition Aruluga! I did notice that about him when researching but I didn't think his story was that complicated! It's funny how something thought to be so threatening is really harmless but can be just as complicating of a story hahaha.
You must log in or register to reply here.