Debunked: Look-Up.org.uk Alleged "spray pipes" on A-320 are Pylon Drains

Max BlissThey are certainly not pitot tubes... they are supposed to be oil drain masts but first of all hydraulic systems do not leak oil...oil would create smoke used for cloud seeding and the liquid could be collected and disposed ecologically not dispersed...

Max BlissThey are certainly not pitot tubes... they are supposed to be oil drain masts but first of all hydraulic systems do not leak oil...oil would create smoke used for cloud seeding and the liquid could be collected and disposed ecologically not dispersed...

If I remember correctly Max agrees that the pipes are put in place during assembly rather than Ian's idea they are retrofitted. Ian used to say the retrofitting was done by Evergreen. One hopes he has caught up with that tale (I haven't seen anything by the chemmies for a while so it may have sunk in they are closed)

so every A320 passes through Evergreen's base??

MikeC said:
so every A320 passes through Evergreen's base??
Click to expand...

I believe that Evergreen is bankrupt and defunct, out of business.

Not sure of the status of the maintenance division.

Harold Saive takes on the position of a debunker ...

He has re-written his pylon drain article and issued this tweet:

JFDee said:
Harold Saive takes on the position of a debunker ...

He has re-written his pylon drain article and issued this tweet:

This is likely to cause more division in the ranks, as Dane Wigington has recently jumped on the Look-up.org.uk bandwagon of "retrofitted nozzles". He combines that with Russ's "high-bypass turbofans don't create contrails" mythos in a single page that is so totally clueless that you don't know where to begin: 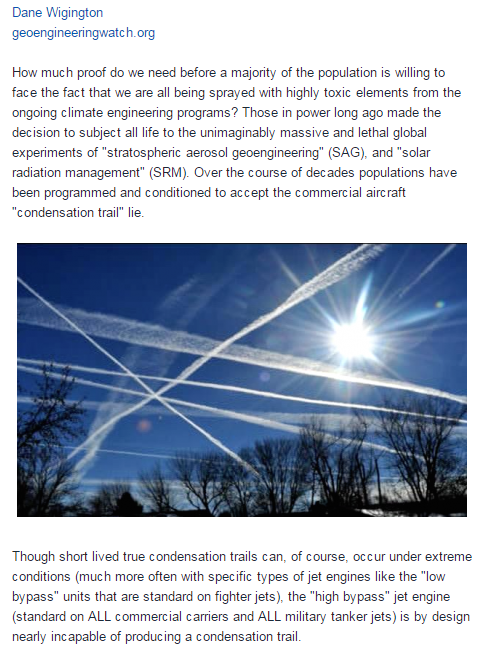 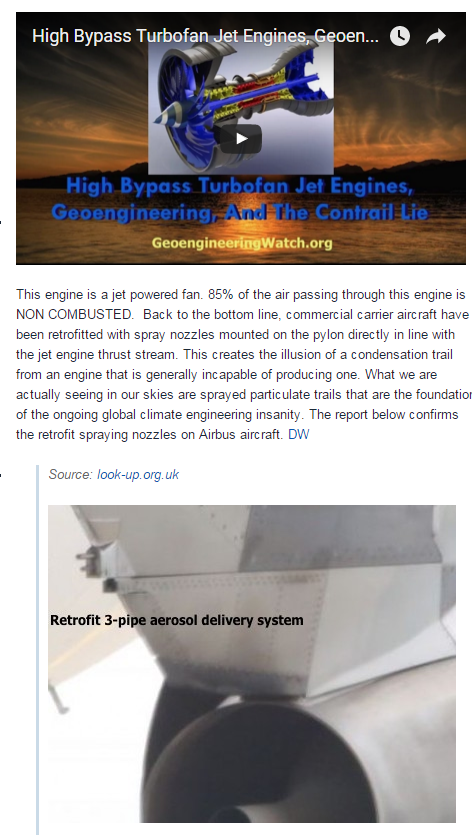 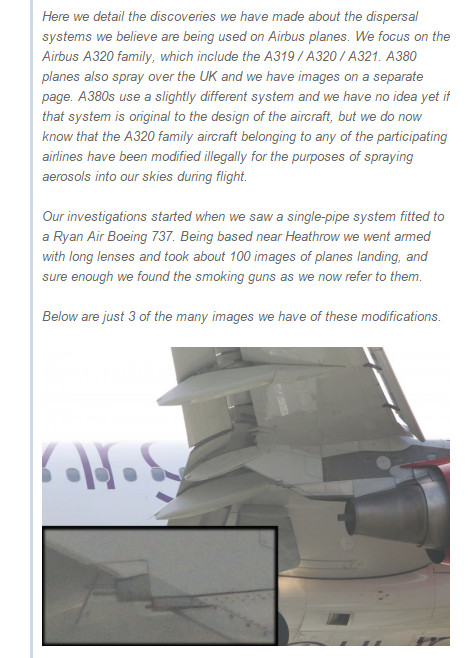 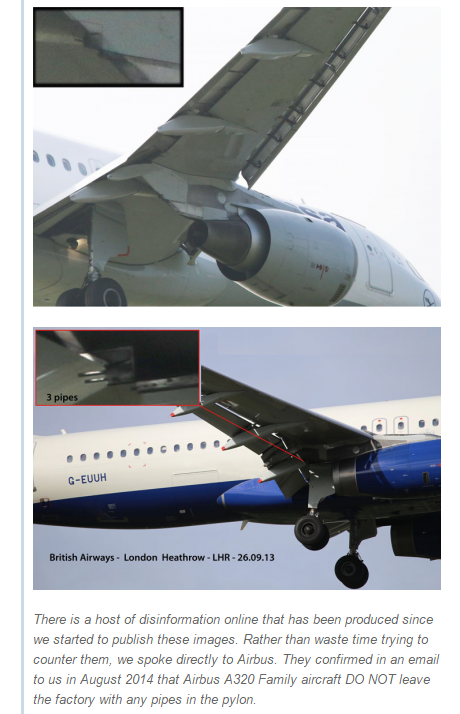 Staff member
I note that Harold Saive's comment has been deleted now. It didn't mention the debunking but he is clearly persona non grata with Dane now! 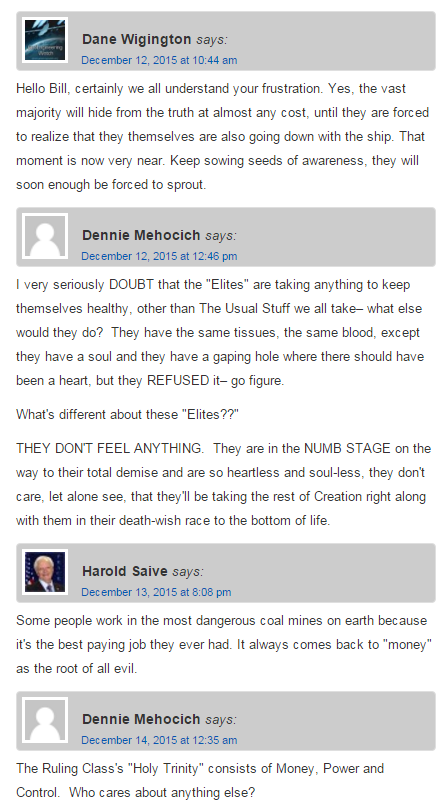 And the current page: http://www.geoengineeringwatch.org/...osol-spraying-nozzles-on-airbus-jet-aircraft/ Spot the difference! 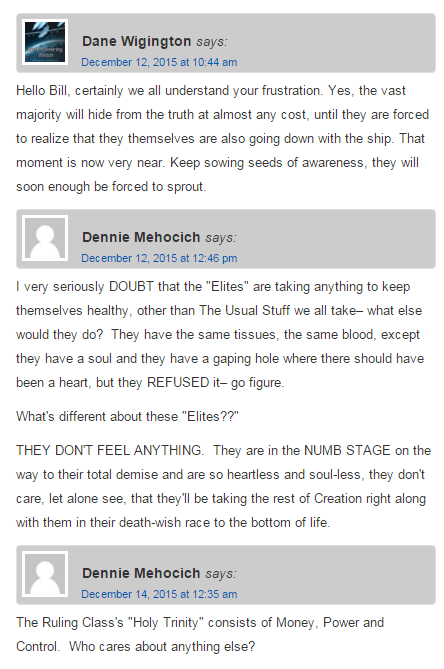 This is the first time I see self-correction by a chemtrail believer. We should actually congratulate Harold Saive that he had the courage and integrity to do that. I do not expect Dane to correct himself, though. He must maintain the image of an infallible leader.

skephu said:
We should actually congratulate Harold Saive that he had the courage and integrity to do that
Click to expand...

I've got the impression that Saive likes to see himself as an "independent thinker", even within the chemtrail community.
There may also be other motives, like a concern about being obsoleted by larger figures of said community; he probably saw an opportunity to dissent within the constraints of the fundamental belief.

Anyway, the tech training manual with its sheer extent is not easily dismissed. Also, Wigington's claim implies a very specific fact (the guiding of pipes) which can be clearly verified, with no gray area.

Dane Wigington has replied to the tweet by Saive I've linked before:

JFDee said:
Dane Wigington has replied to the tweet by Saive I've linked before:

Dane Wigington giving Ian Simpson some credence? Someone needs to point him to Ian's claim of a secret island in the Gulf of Guinea or aircraft flying at warp speed, not to mention claims of new clouds.

Note to Harold... money is not "the root of all evil"; the love of money is.

I'm getting confused, yesterday, Harold Saive agreed that Pylon Drains couldn't be used for spraying, to day he is saying that Ian's idea that ULD's are used to carry the mix and it's ejected through the pylon drains? 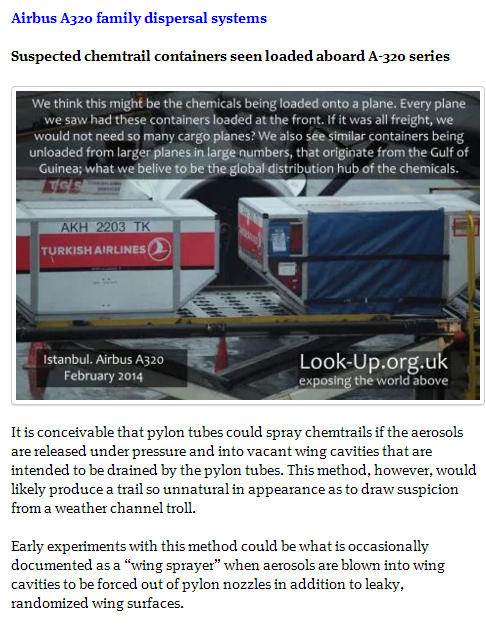 As I understand it, Saive now ponders about aerodynamic contrails ("wing sprayers") being experiments with dispersing chemicals inside the engine pylons, so that the drain masts at the back side of the pylons are "draining" the chemicals.

He thinks this is not the main method of spraying because the trail created is too much of an eye-catcher. His favourite theory is that chemical dispersal is commonly done inside the turbofan duct.
Last edited: Dec 16, 2015

M Bornong said:
I'm getting confused, yesterday, Harold Saive agreed that Pylon Drains couldn't be used for spraying, to day he is saying that Ian's idea that ULD's are used to carry the mix and it's ejected through the pylon drains?
View attachment 16737

He also links to this very thread as the "image source"!

M Bornong said:
I'm getting confused, yesterday, Harold Saive agreed that Pylon Drains couldn't be used for spraying, to day he is saying that Ian's idea that ULD's are used to carry the mix and it's ejected through the pylon drains?
View attachment 16737

Having trouble envisioning: "It is conceivable that pylon tubes could spray chemtrails if the aerosols are released under pressure and into vacant wing cavities that are intended to be drained by the pylon tubes. Early experiments with this method could be what is occasionally documented as a "wing sprayer" when aerosols are into wing cavities to be forced out of pylon nozzles, in addition to leaky randomized wing surfaces"
Regardless whether the "chemicals" are in liquid form or even in dry form (hard to "spray" though), blowing them into wing cavities is going to cause all kinds of problems, not the least of which would be jamming up hydraulics, hinges, causing weight imbalance between the wings and the potential for corrosion. These containers could conceivably hold chemicals, in dry form, none of these containers are certified to carry liquid. So, there would have to be some sort of hookup to a mixer that would mix it with some kind of liquid like water, then of course there would have to be a water tank or tanks for this. The whole process seems unimaginably complicated, and there would likely be a few (many?) personnel involved in doing this. Filling the containers, filling the water tank, placing the containers in the right place, hooking up the containers to the water tank, and to the exit hose/pump. And then there is the matter of how much "spraying" will they do, in terms of volume and length of "chemtrail". Even if the entire baggage compartment was full of these tanks (unlikely), could the spray last for more than a few minutes? The chemmies are claiming than tons and tons of the stuff is raining down on them. The whole idea is far fetched to say the least, in fact, it's ludicrous.
It's one thing to say, yeah, they are putting the chemicals in these containers and spraying it out these tubes here, well, you need to think what happens in between, the whole process, you can't just say it's in those containers and out it comes from some tubes visible on the outside of the engine.
And, oh man, don't get me started on HAARP.
Cheers all

hemi said:
His latest "Easyjet are storing the chemicals in the front cargo hold" post has some sensible debunks, from users whose facebook profiles look pretty authentic. Let's see how long they last...

Just bumping this thread to address this particular point. I flew with easyJet from Gatwick to Geneva last week, and took this picture of the aircraft at the departure gate, with luggage being loaded into the front hold. This was a full flight and lots of passengers were taking ski equipment, so I guess there was no room for chemtrail juice. The plane is HB-JXB, flight was on February 26. 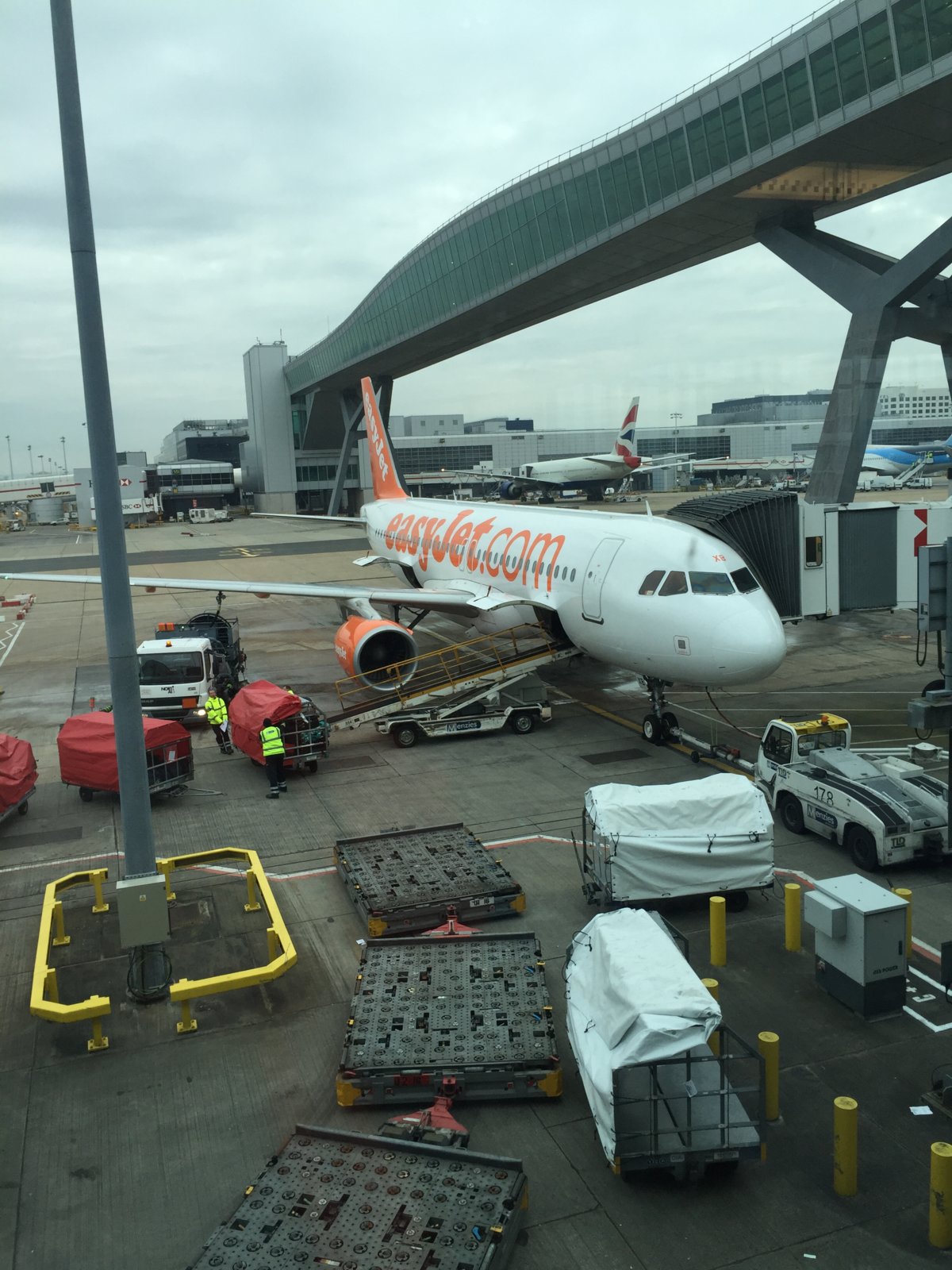 And I grabbed a shot of the pylon drains as I left the plane in Geneva: 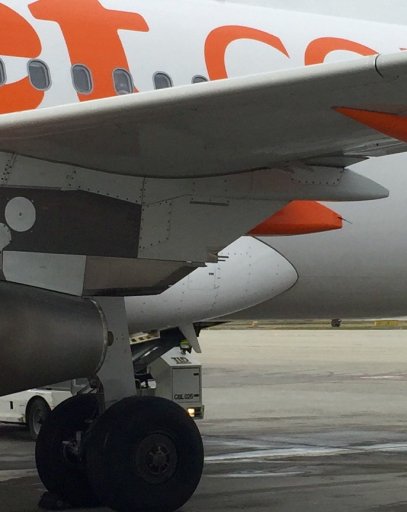 I fly the A320 and A319 which look remarkably similar to this (Swiss) aircraft. Both Swiss and UK arms of this company are harmonised in their operation, so the use of holds is the same: the majority of the baggage goes in the front hold of an A320 and in the rear of an A319 for weight and balance reasons, due to the fact that the 320 is longer and so the centre of gravity is further aft. The short turnarounds mean that a single loading policy for each type saves time. The aircraft are not equipped for use of ULDs, which need rollers installed in the floor of the holds. Look-up implies that the barriers shown in the photos are there to prevent access, but of course they are nets to stop the baggage moving around and falling out when the hold is opened! And they are opened on every arrival, just in case things have been loaded in error or bulk prevents all the bags going in the required hold. If access was restricted then I'm sure they'd keep them closed.

The drain pipes are standard for all aircraft fitted with the CFM56 engine (the only other choice until very recently is the IAE V2500 which has a different arrangement). You would think that the way to show that they are a 'modification' would be to show a CFM56-engined 320 without the drain pipes. But I don't think you can.

I was wrong. The IAE engine has exactly the same pylon drain installation. 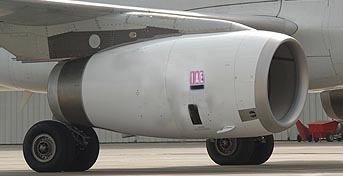 Also, the fuel drain that the Airbus representative mentioned, that got everyone confused, is the one that sticks out a bit on the underside of the engine nacelle. This is also an oil drain. 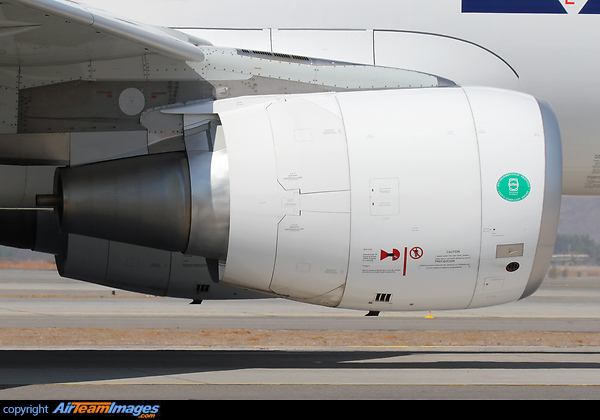 Thanks Clunk. Good to see another pilot in here.

TEEJ said:
Terry is off again down the same path. He has just made the following video.

Published on 2 Mar 2015
This pipe has been retro fitted. It is not an original feature on the CFM56-7 boeing 737 engine schematics. On the Boeing 737 technical website it is referred to as the 'Aft Fairing Drain Tube'.
This 'Drain tube' happens to be situated in the perfect location to deliver materials on demand into the hot exhaust fumes for contrail smoke generation, as described in US patent 3899144.
http://docs.google.com/viewer?
url=patentimages.storage.googleapis.com/pdfs/US3899144.pdf.

Content from external source
He has used a cutaway as proof, but this is an old cutaway originally appearing in Flight International in 1981.
It was the CFM-56 Pylon design for the DC-8 Series 70.

The graphic was later used during 2006 by Flight International. The url still contained the DC-8 description.

I may have found why that tube is not represented in the original blueprints. First, I see in http://www.b737.org.uk/powerplant.htm that:

The CFM56-7 tailpipe is slightly longer then the CFM56-3 and has a small tube protruding from the faring. This is the Aft Fairing Drain Tube for any hydraulic fluid, oil or fuel that may collect in there. There is also a second drain tube that does not protrude located on the inside of the fairing.

Content from external source
So that tube is the Aft Fairing Drain Tube. Then I see this article that explains why you won't find this tube in the original designs: http://aviationweek.com/awin/boeing-737ng-engine-drain-tube-swap-required-faa

The FAA has ordered Boeing 737 Next Generation operators to replace engine strut fluid draining systems with updated assemblies designed to eliminate a wear problem that caused some tubes to fail, creating a fire hazard. 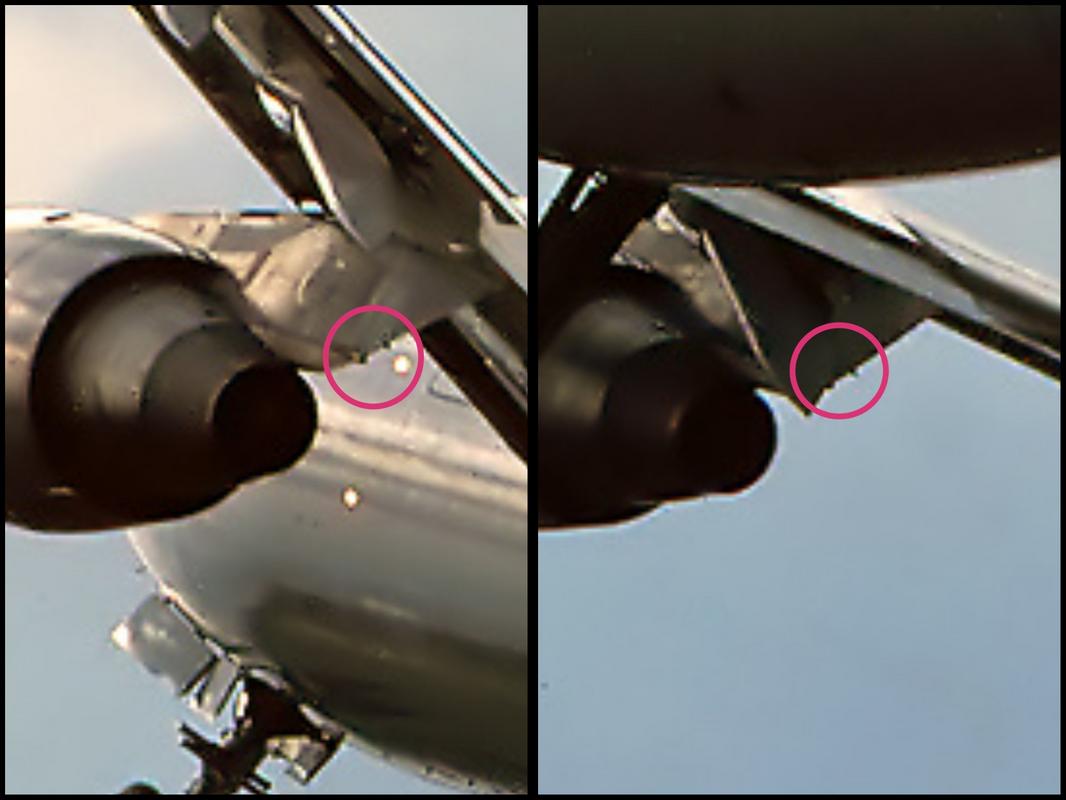 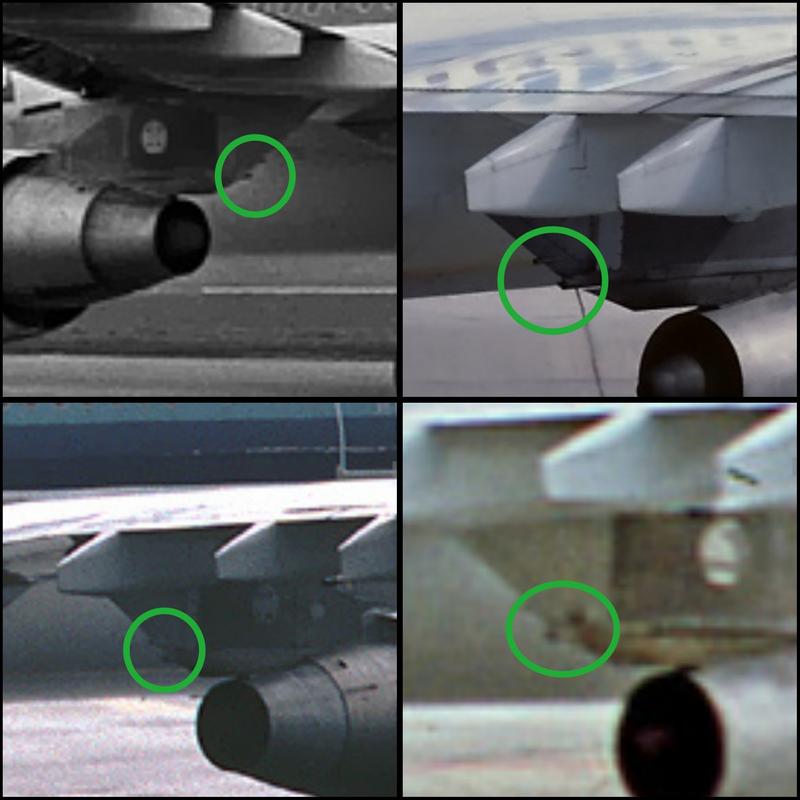 https://www.airliners.net/photo/Eastern-Air-Lines/Airbus-A300B4-2C/360794?qsp=eJwtjEkOwjAMRa+CvGZRqMTQXbkALLiA5XxBRSGRbQmiqncnKezeH/QmkvhyfPyaE6gjA6vcaU2JlZ9G3UQP5HfUUJj6tmlWm+P+UA4W1U+5lIEdvQiSI/z7swZonWCyuG7Vva0IvfxSuysxDJZGXixwHkaa5y+rrS6t
Last edited: Apr 7, 2019
You must log in or register to reply here.