Staff member
I'm all in favor of alternative energy sources, but this story just sounded a bit too good to be true:

[EX=http://www.usatoday.com/news/nation/story/2012-03-09/Tennessee-professor-cross-country-two-gallons-gas/53438112/1]Ricketts, a Middle Tennessee State University professor, and his eight-member support team drove three Toyota hybrid alternative-fuels vehicles approximately 2,582 miles across country, using only about 2.15 gallons of fuel — much less than his 10-gallon goal —purchased at the gas pump, according to an MTSU news release.
A 1994, four-speed Toyota Tercel and an '05 Toyota Prius hybrid were driven on Sunday from Tybee Island, Ga., to MTSU in Murfreesboro, Tenn., then from MTSU to Conway, Ark. In the first 900 miles, zero gas was used, Ricketts said, adding that other fuel sources were solar (the sun), electric, ethanol and hydrogen from water.[/EX]

This story is incredibly vague on exactly what fuel sources were used, and how much. Leading some in the conspiracy community to think he's invented some kind of magic super efficient car, or can somehow run the car on water. Hence they expect him to be assassinated any day now by big oil.

Let's be clear here. The car did NOT get all of its power from 2.15 gallons of gas. Instead what we've got is simply a car that uses alternative fuel sources, in the case of the Prius it used electricity (meaning he plugged it at night), and ethanol, which means he used E95, with is 95% ethanol, and 5% gas.

And what of the other two cars, using solar power and hydrogen? Free energy?

[EX=http://abcnews.go.com/blogs/technology/2012/03/tennessee-professor-tries-to-drive-across-us-on-10-gallons-of-gas/]“My big goal,” he said, “is to go coast to coast on sun and water” — extracting hydrogen from water in the lab with solar power — but he ran into trouble getting the needed hydrogen tanks to make the trip. That’s why he switched to E95; otherwise the trip would be gasoline-free.

He spoke by cellphone from Interstate 40, “about 30 miles this side of Memphis,” as he was looking for a fast-food place where he and his little convoy could find enough space to park. Ricketts himself may make the voyage on 10 gallons, but assistants are towing the other two vehicles using conventionally-fueled vans.[/EX]

Note the hydrogen was produced "in the lab", so it's not cracking water into hydrogen on the road, it's using big 50 gallon tanks of liquid hydrogen that they made earlier, back at the lab. And they ran out of that, so those cars were towed the rest of the way with gas powered trucks up to Arkansas.

And how exactly was this hydrogen produced? From an earlier trip, he discusses how it is done:

[EX=http://www.mtsu.edu/news/Record/Rec_v19/rec1910.shtml]How does the engine run off sun and water? Ricketts says the MTSU solar unit provides DC electricity, which is converted into AC electric, and it goes into the grid line.

“In essence, the MTSU system is doing the same thing as a hydro dam or coal-powered unit,” he says.

“In order to produce hydrogen, tap water is de-ionized and then sent to a solid polymer electrolysis unit,” he adds. “When the electrolysis unit is running, it uses the stored solar produced by electricity. … This system is a result of using TVA’s Green Power Switch Generation Partners Program.

“Next, the hydrogen comes out at 200 psi and goes into two 500-gallon storage tanks and then is compressed to 6,000 psi. The vehicle is then filled with hydrogen. It has two 4.2-kilogram tanks rated at 5,000 psi per tank. The vehicle is adapted and equipped to get a 370-mile range.”

Ricketts’ ultimate applied-science research goal is to drive from coast to coast, hopefully in 2011, using only 10 gallons of gasoline.[/EX] 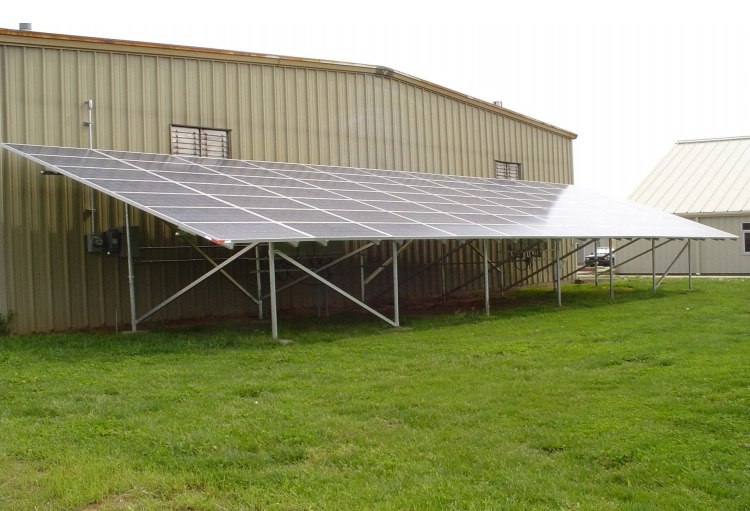 produced some electricity which is then FED BACK INTO THE GRID. Later they use regular electricity to crack water into hydrogen with an electrolysis unit:
which is then put into enormous tanks in car.

Ricketts has a lifecycle diagram:
http://www.tectn.org/fckeditor/file/SSTSpeakerCliffRicketts-MTSU-SustainFutureTrans110510.pdf 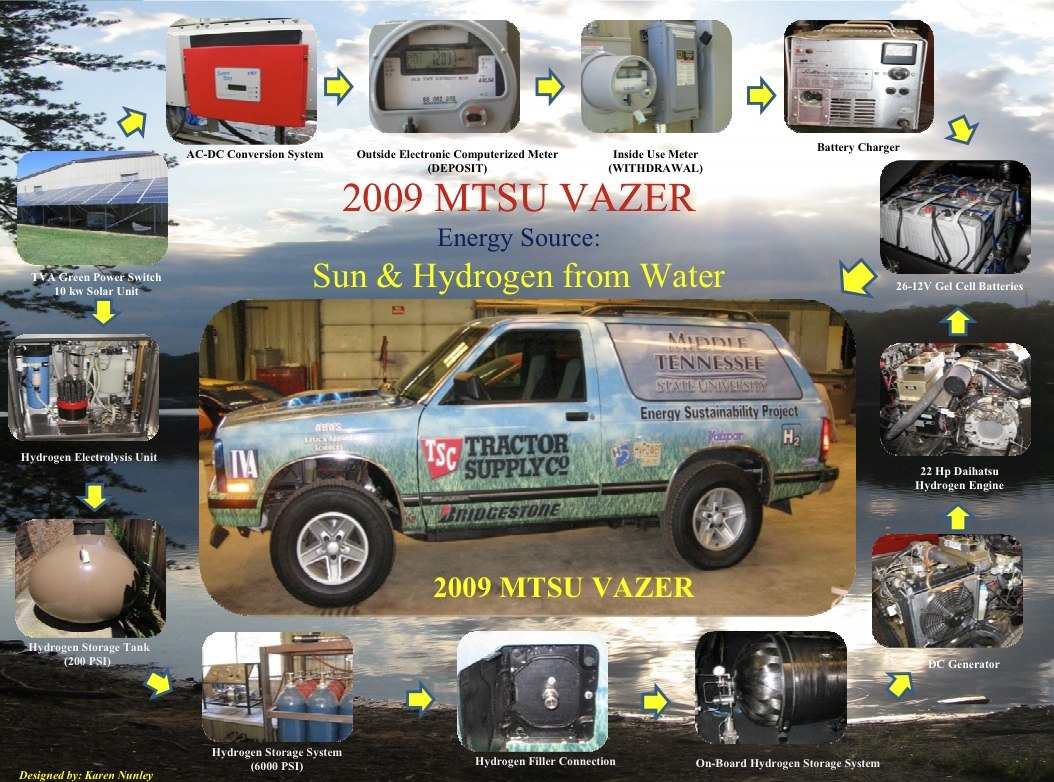 And another for the "solar/water powered" car, which shows it's just a solar panel feeding back into the grid, then the car is recharged off the grid using the "credit" from electricity added in another location. 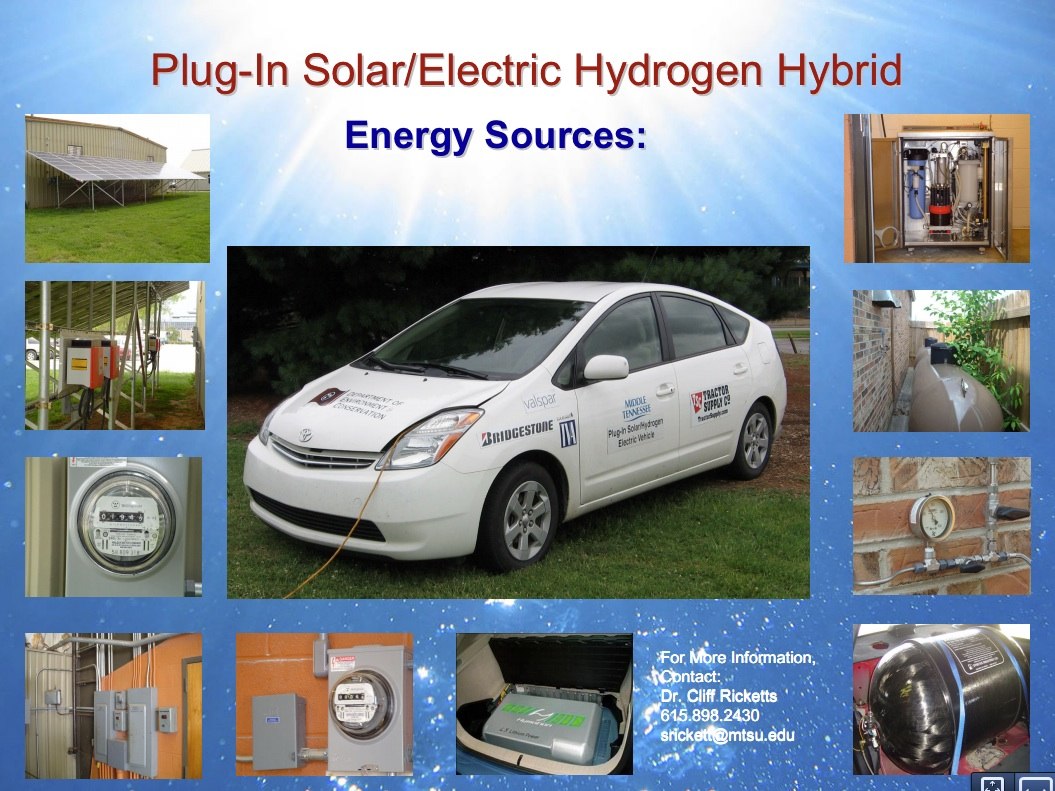 So in summary, these headlines are incredibly misleading. Sure it only used 2.15 gallons of gas, but it used a heck of a lot of other fuel sources, and was vastly more expensive.
Last edited: Nov 20, 2013
You must log in or register to reply here.