[Bunk]
ANOTHER French false flag in Nice – is Greece next?

*That a bizarre photo supposedly taken after the truck attack, but prominently and inexplicably featuring a mis-dated sign (see above) seems designed to link the event to the Brexit vote. 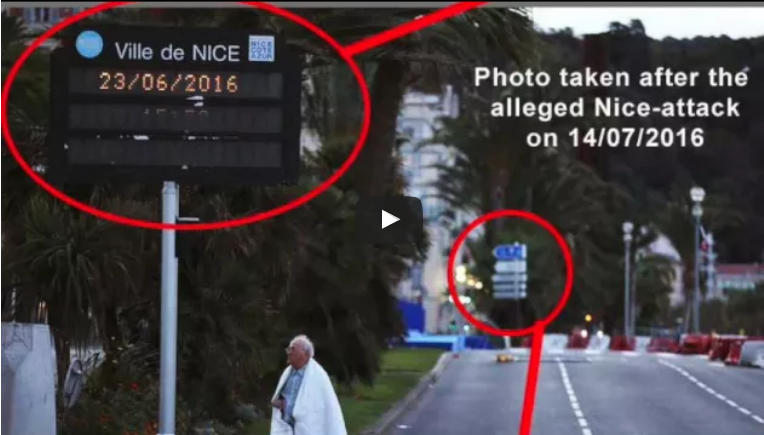 In this video, the young lady spends alot of time trying to track down the photographer and photo metadata because she too thinks the sign is another "anomalie" indicating a false flag.

Now while i cant prove definitively why the sign says June 23, 2016, and it is technically the Promenade des Anglais (Walk of the English) so perhaps the French are supporting Brexit, who knows, i can show that the sign has never been used to show the day's date or time which is what the video above seems to be claiming (timestamp 1 minute). It is a traffic alert sign that according to Google Streetview has been there since at least 2008.
In 2016 they did remodel the area a bit and moved the sign back maybe 6 feet or so to accomadate a sidewalk, you can see the construction taking place in the April 2016 street view.

A possibility of that particular traffic alert (and subsequent date) was a soccer match thing happening in Nice.

Under the control of police forces, the use of vehicles of any kind is prohibited, except vehicles of general interest of beneficiaries and organization:

Near the Fan Zone:
Place Guynemer, North floor
quai Rauba Capeu, Ground North
Wharf United States, Ground North
Van Loo
streets Brea and Milton Robbins
Avenue Phocéens
Massena
Avenue Felix Faure, the Alberti street at Place Massena except GIG-GIC vehicles and users of Massena car-park. Vehicles parked on the street and Chauvain Félix Faure Avenue will be allowed to move in the opposite direction on Avenue Felix Faure toward the street Alberti
street Chauvain, the Gioffredo Street at the Avenue Felix Faure (except the GIG-GIC vehicles and vehicles parked on street Chauvain to be allowed to move in the opposite direction on Avenue Felix Faure towards the Alberti street)
avenue de Verdun
tunnel Congress
promenade des Anglais, North Avenue roadway OM of the avenue de Verdun
Promenade des Anglais, South road, the boulevard Gambetta Avenue Phocéens (except taxis and residents who will be allowed to circulate on the south pavement of the Promenade des Anglais from the street Congress to join the rue Halevy)
a detour will be established on the boulevard Gambetta where traffic south there will be allowed materialized on two tracks) 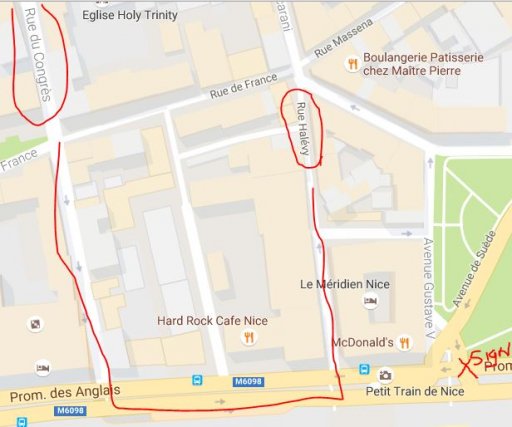 I imagine they wouldnt have needed a new alert for Bastille day celebrations because this area of the Promenade was already closed to vehicle traffic. The sign for that obviously would have been further back up the road.
Where 'blanketman' is walking is a few blocks down from where the murder vehicle was finally stopped. you can match the blue and white road signs and smokestack type thing in the background to confirm the location. I cant show the whole shot with google street view as i dont have the zoom lens the cameraman was obviously using.

here is a more clear photo of blanket and a google shot zoomed up to the sign and smokestack thing. 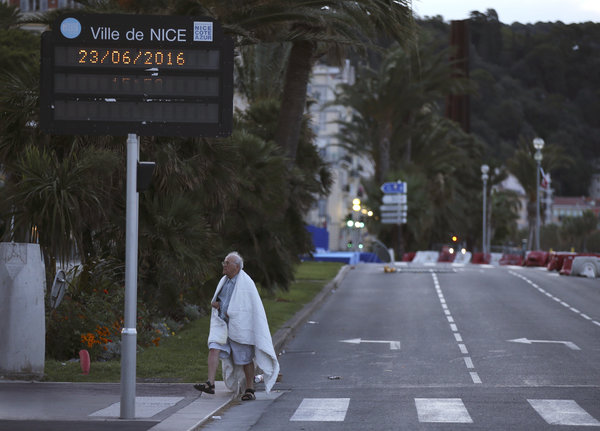 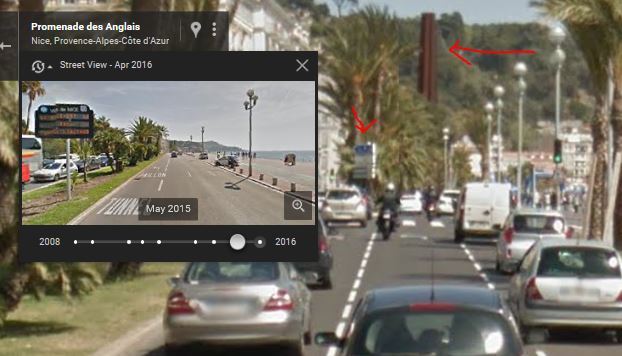 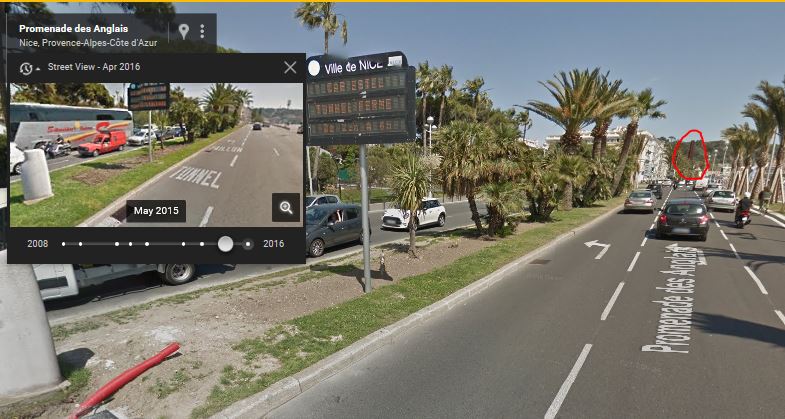 if i pull back a bit the traffic alert sign can be seen. here is the google street link people can play around with and check all the streetviewdates (ill add a few here) to see that the sign is not used to display the day's date.

one example is April 2008 displaying info about a marathon which obviously isnt happening at the time of the camera since cars are driving there. (Dimanche, if i remember correctly, means Sunday. and fermee means "closed") 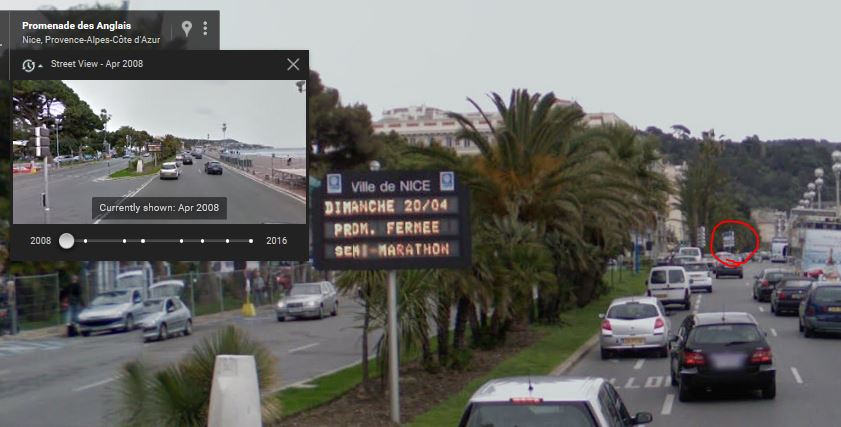 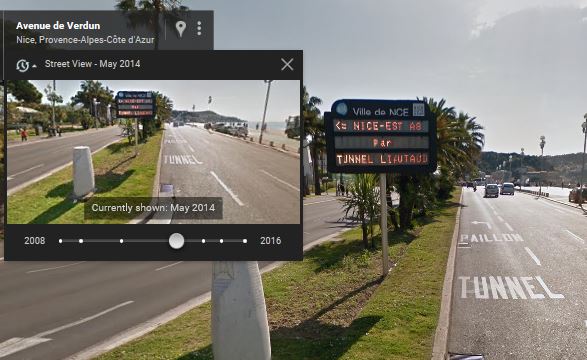 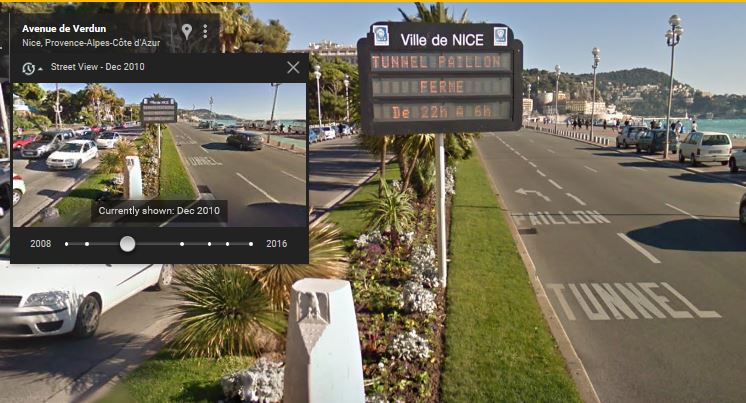 Just like with similar US signs, if the message is too long to fit on one screen, then they alternate between two. The photo shows the sign in the process of being refreshed, and it looks like the second line is "15:50" or similar.
Last edited: Jul 26, 2016

seems the video girl is right, it does say 15:59 ..wonder what that means? either way its dfinitely not a clock. 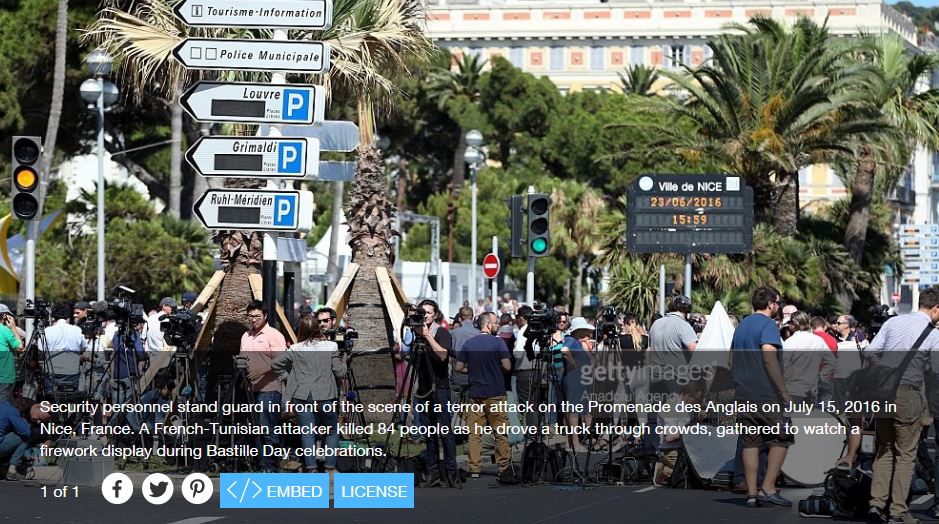 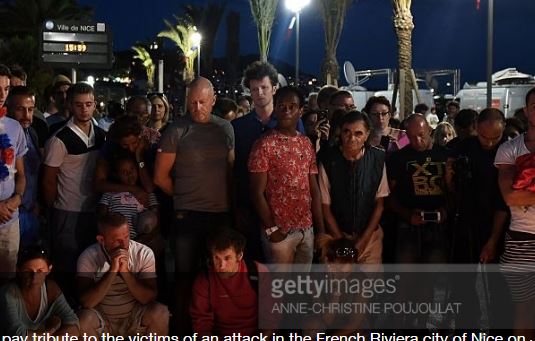