9/11 conspiracy theorists cite a mysterious explosion in the lobby of the South Tower shortly before it collapsed as evidence of controlled demolition. The explosion is mentioned at about the 48:40 mark In the 2014 David Hooper film, The Anatomy of a Great Deception (viewable in its entirety on YouTube at youtube.com/watch?v=l0Q5eZhCPuc ), where a still picture is presented that appears to show a column of dark smoke emanating from the lobby windows on the south side of the building. Here is a frame from Hooper’s film showing the still picture: 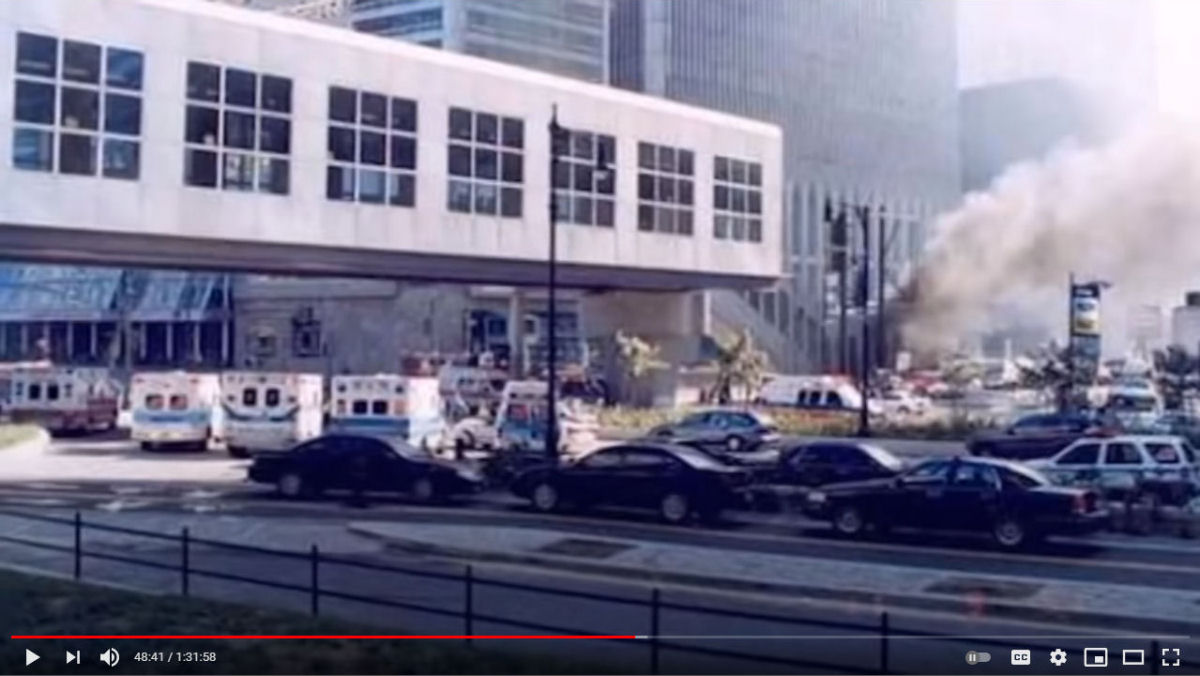 The narrator (Hooper himself) tells the audience that the picture was recently released under a Freedom of Information Act request and that it "captured an explosion originating at the base of the South Tower just before the first tower collapsed." However, that is simply not true. There is no evidence of an explosion, there is nothing suspicious about the photo and the US Government was not reluctant to release it. The source of the smoke was actually a burning utility van hundreds of feet away from the South Tower that had been ignited by falling debris. The van was not visible in the picture due to the low-resolution of the image which, contrary to David Hooper’s claims, was not from the 2011 FOIA release but was scanned from a 2005 NIST report on emergency operations (NCSTAR 1-8, Page 102). It was included there merely to show where emergency vehicles had parked. Here is the picture as it appears in the NIST report: 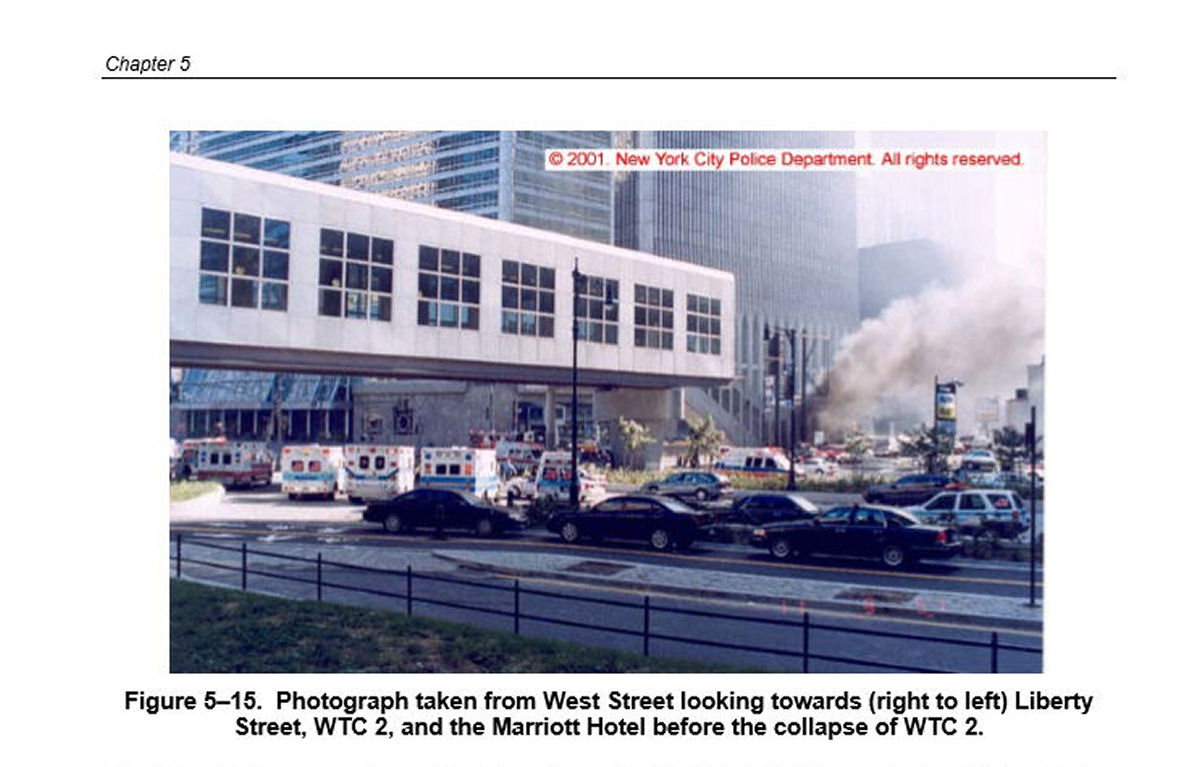 The actual FOIA photo is much higher in resolution and shows a lot more detail. It is shown below. 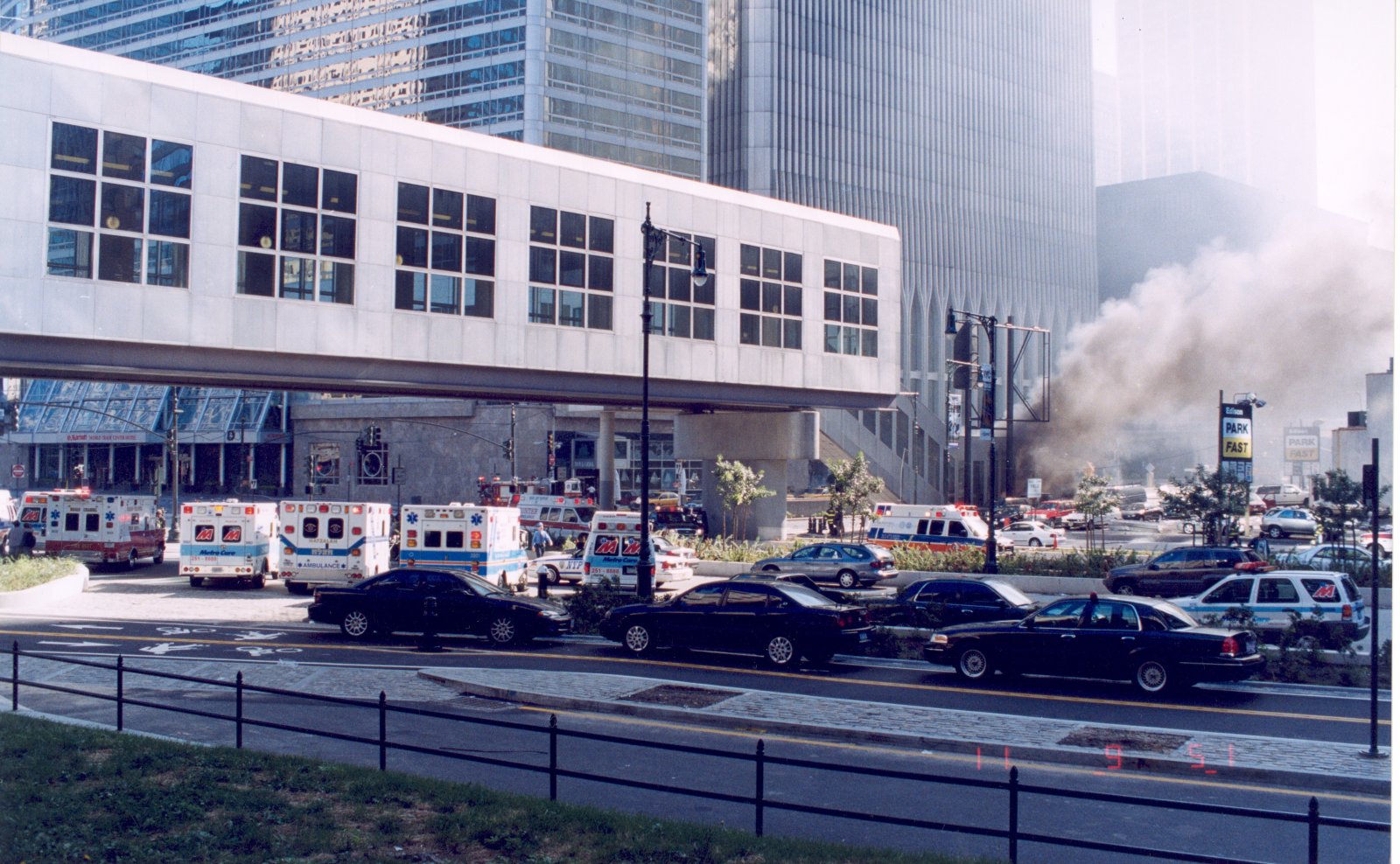 If you zoom in on the original photo at the point where the smoke seems to be originating, you will see the top of the burning van and orange flame visible through a rear window. If you cannot make it out, the orange flame is directly below the traffic sign that says "RIGHT TURN YIELD TO PEDESTRIANS." Here is a blowup of that area of the picture: 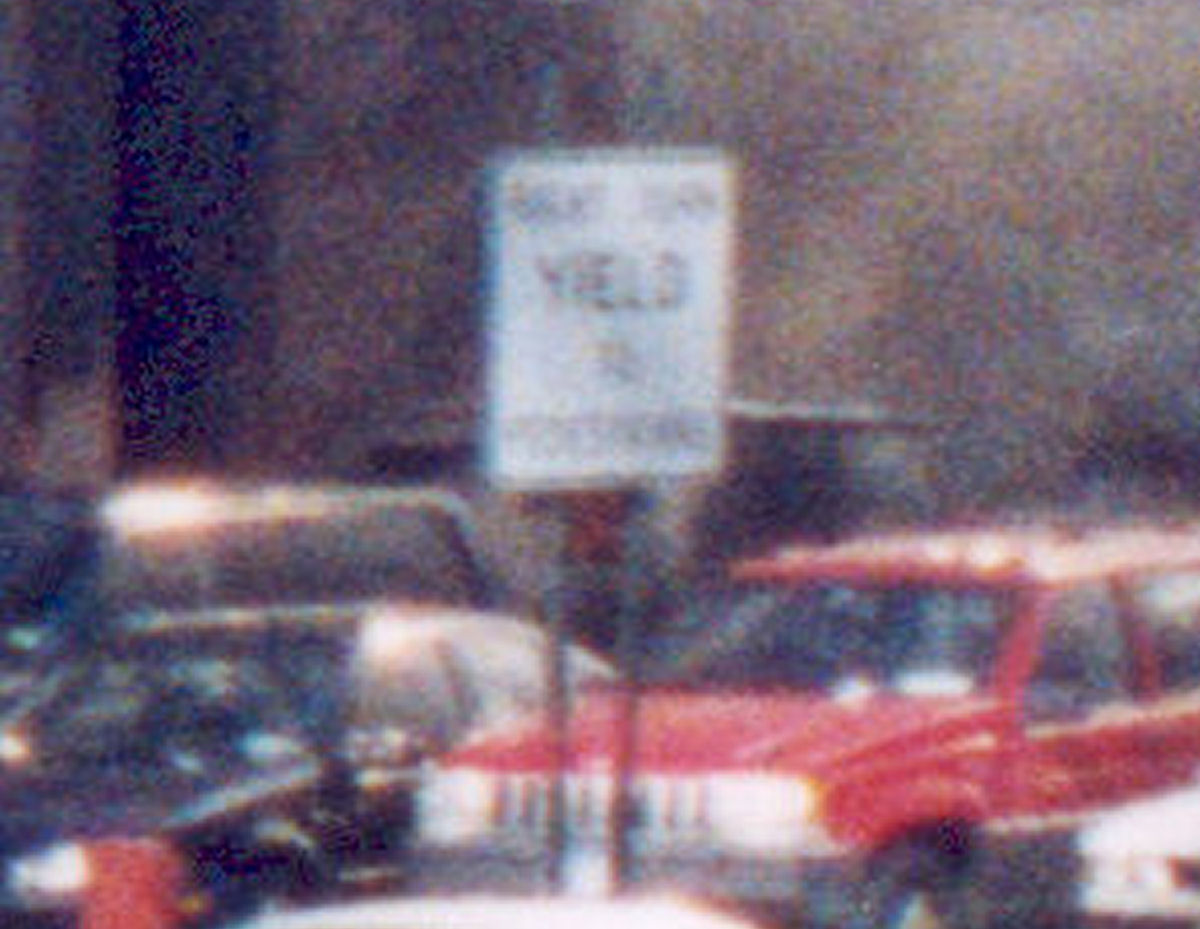 The burning van was parked next to the escalator section of the Liberty Street Pedestrian Bridge, more than 200 feet from the WTC South Tower. When the picture was taken, the wind had shifted and the angle of the shot happened to be lined up just right so that it looks as if the smoke from the van in the foreground was coming from the World Trade Center building in the distance. The picture below, taken a few moments before on the same roll of film, clearly shows the actual source of the smoke: 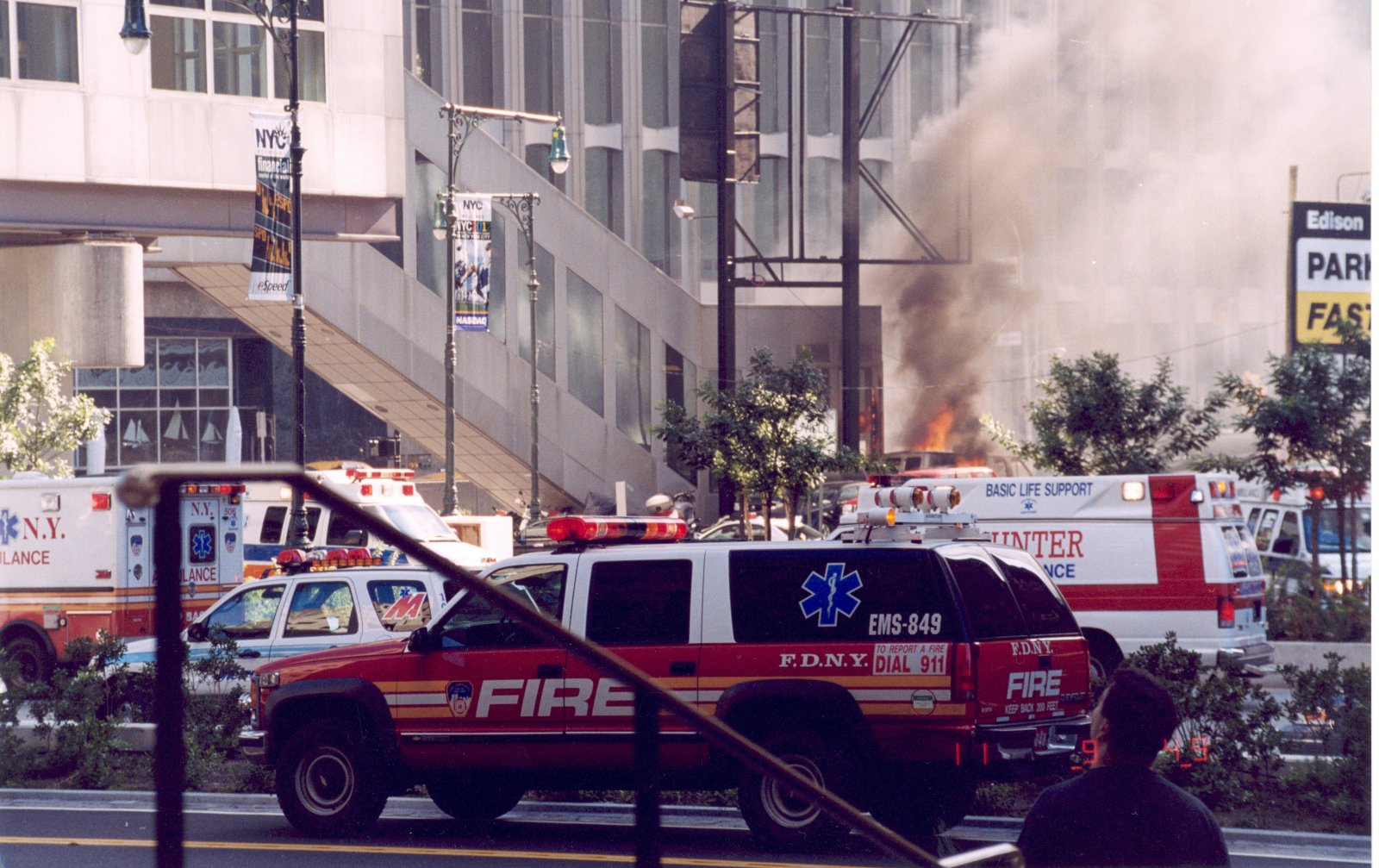 Here is a blowup of the area of the picture showing the top of the burning van: 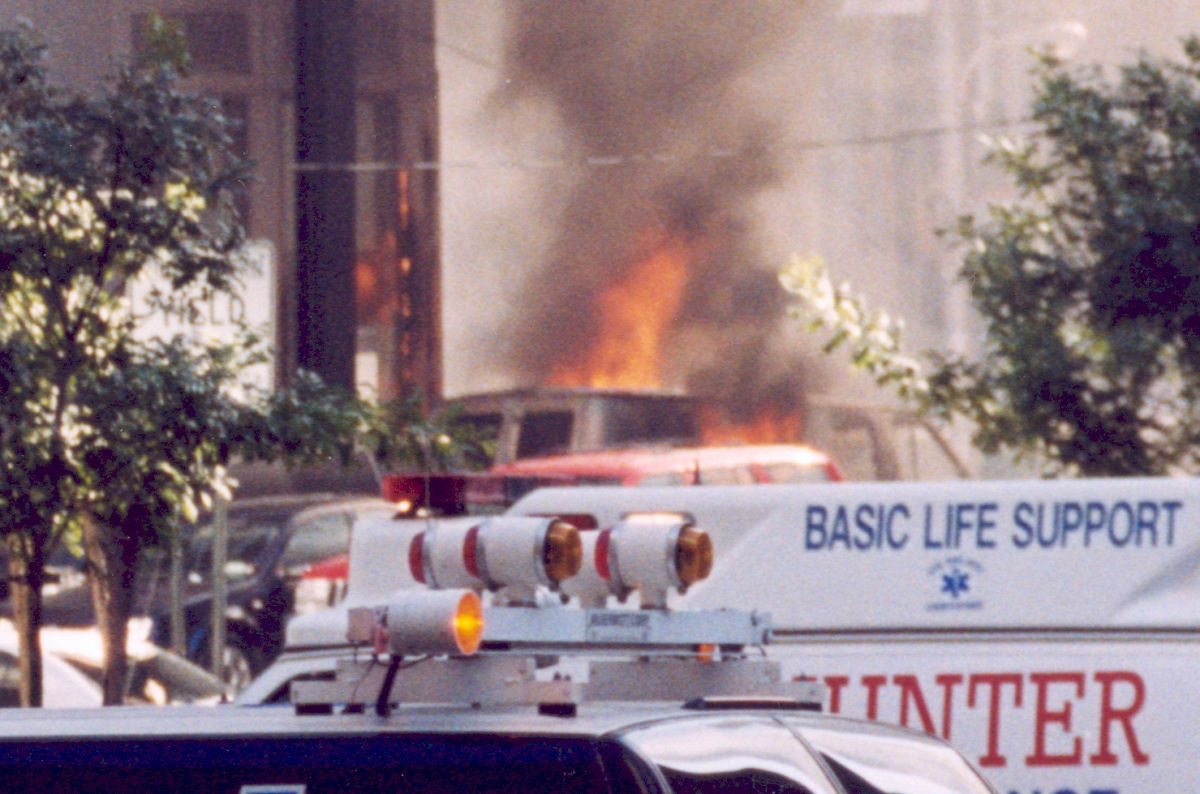 At least a dozen other pictures taken by NYPD photographers around the base of the South Tower clearly show the burning van and the undamaged South Tower lobby. One has to wonder why David Hooper and his Technical Director, Richard Gage, chose to present the one picture where the van is not visible and the source of the smoke is ambiguous.

Incidentally, the two pictures referenced above are available on the website of the International Center for 9/11 Studies. Here are their URLs:

Why would an explosion at the ground floor be related to a top-down destruction of the building?

I can’t even follow the logic of most of the controlled demolition conspiracies.

Amber Robot said:
Why would an explosion at the ground floor be related to a top-down destruction of the building?

There is no logic, just as there is no evidence. However, that doesn't stop filmmakers and charlatans from making up stuff for the consumption of naïve paranoiacs. The David Hooper film from which I drew the two misrepresentations discussed in this thread and my previous thread contains dozens of similar instances where evidence was altered, misrepresented or concealed for the purpose of tricking the audience into believing things happened that really didn’t. That film was heavily promoted on the Architects and Engineers for 9/11 Truth website and features its CEO, Richard Gage, as its “Technical Director.” As my time permits, I will create new threads debunking additional misrepresentations in Hooper’s ironically-titled film.

Amber Robot said:
Why would an explosion at the ground floor be related to a top-down destruction of the building?
Click to expand...

"See how the government is lying to us, but we know the real truth" is the ironic narrative here.

Mendel said:
"See how the government is lying to us, but we know the real truth" is the ironic narrative here.
Click to expand...

The "ironic narrative" is that a movie, that is itself filled with deceptions, could have been given the title The Anatomy of a Great Deception. If the claims made by the filmmakers were true, they would stand tall on their own merits and not need to be propped up with the kinds of fraudulent manipulation of evidence and hiding of explanatory information I have been documenting.

Amber Robot said:
Why would an explosion at the ground floor be related to a top-down destruction of the building?
Click to expand...

The idea is that the internal columns would have needed to be weakened before the top-down collapse would have been even possible. This "argument" is usually made by people that have no clue about the engineering of the towers.
You must log in or register to reply here.