Staff member
Tall tales of pyramids in Antarctica date back to the 1931 H. P. Lovecraft story At the Mountains of Madness. The story was written at a time when the continent had barely been explored, and huge expanses were still yet to be surveyed. The remote and inaccessible nature of the land allowed Lovecraft to invent a bizarre alien architecture, and as he was interested in ancient Egyptian architecture it was only natural for him to incorporate Pyramids into the mix.

Fast forward to the 21st century, and "Pyramids in Antartica" makes a comeback in the form of rocky peaks with sharp angles formed by glacial action poking though the surface of the deep snowfields that cover most of Antarctica. These areas of exposed rock are called nunataks and come in all shapes and sizes. 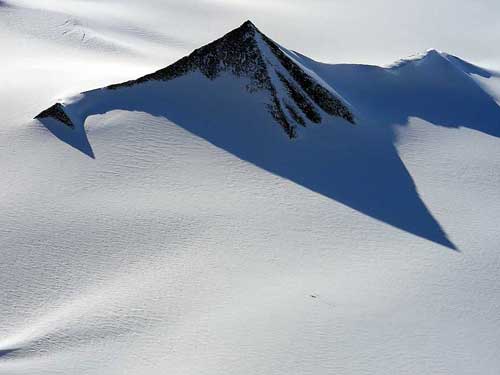 The nunatak also shows up in a video she shot 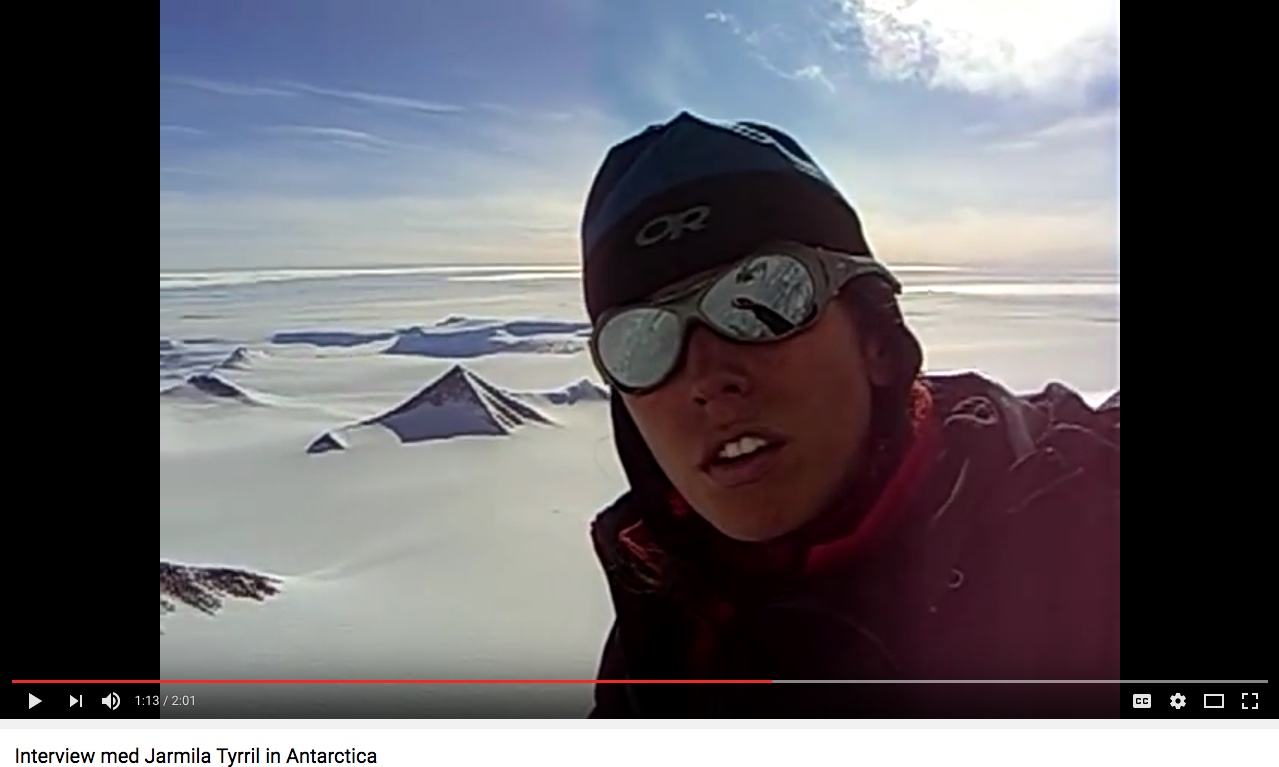 The photo was republished on the forum of the conspiracy themed web-site disclose.tv in 2009 (the forum has since been closed). Over the next few years it became as staple part of the "pyramids in Antartica" myth, and has been reposted in hundreds of web site, like BeforeItsNews in 2013, (and in 2012). Also in 2013 a story was published on the junk news site "Voice of Russia" (now merged with the similar "Sputnik News" site). That store cited disclose.tv as a source. The story was debunked that same year by Ian Chadwick.

This particular nunatak also showed up in the photo galleries of expedition photographer, Gordon Wiltsie. 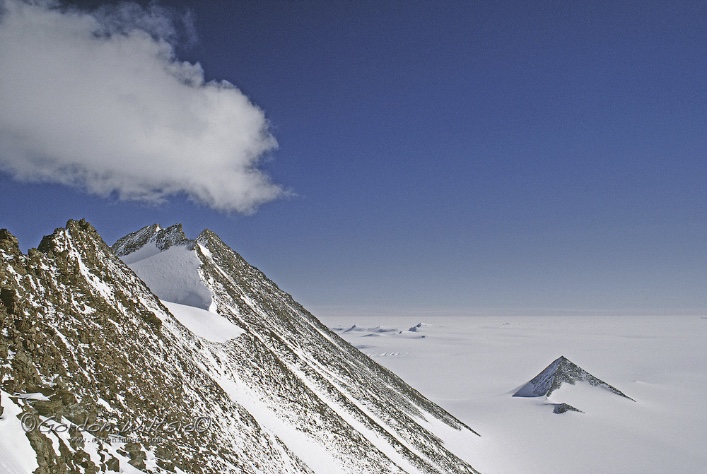 Viewed close up you can see it's just a natural formation: 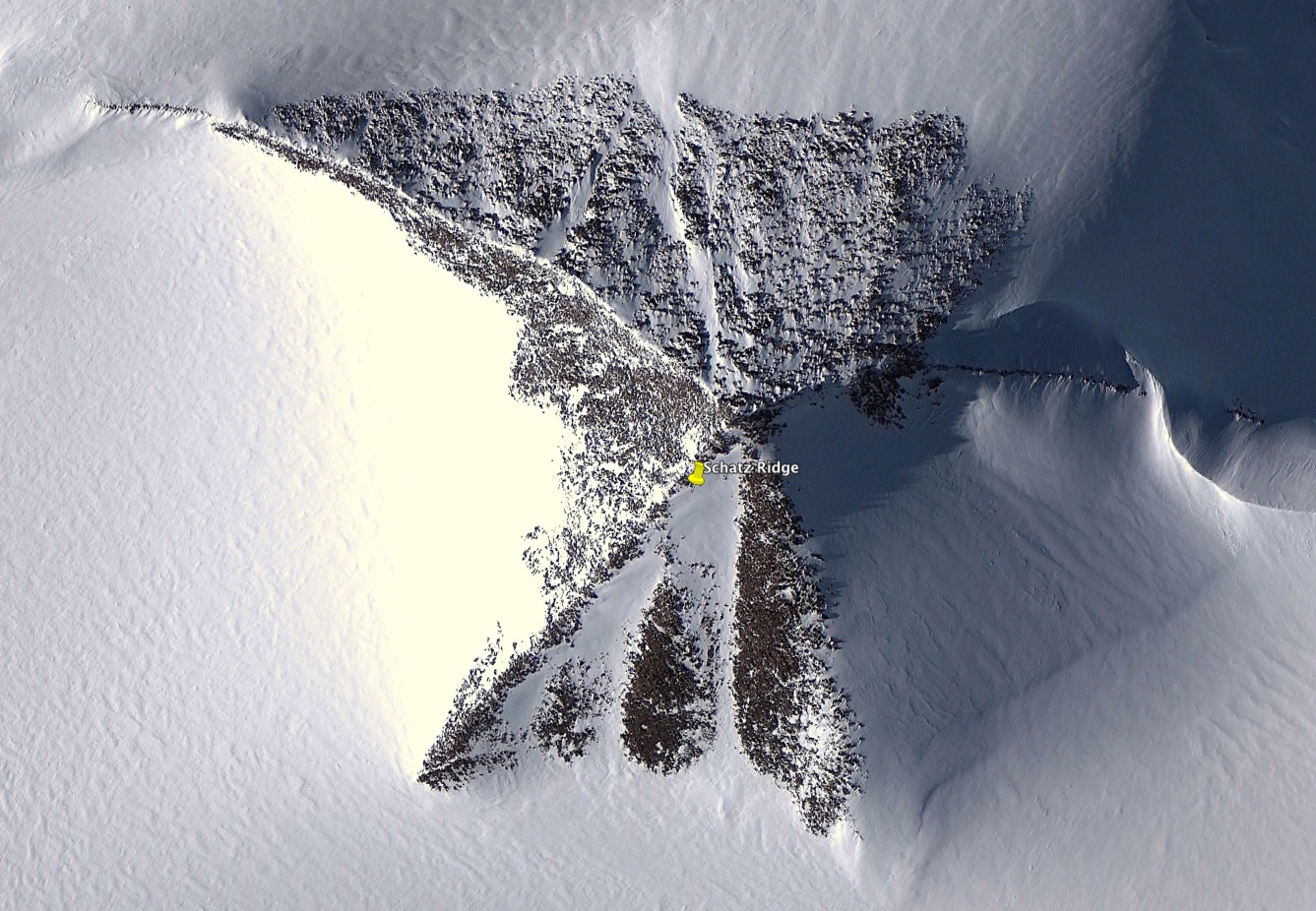 The sharp edges are typical of glacial formed mountains and are called "glacial horns" or just "pyramidal peaks", the most famous example being the Matterhorn. They are formed by a natural process.

There's thousands of feet of snow in Antarctica. If you removed it the scene would look more like this view of the alps. But as it is we just see the tips of the mountains seeming rising up from a flat plain. 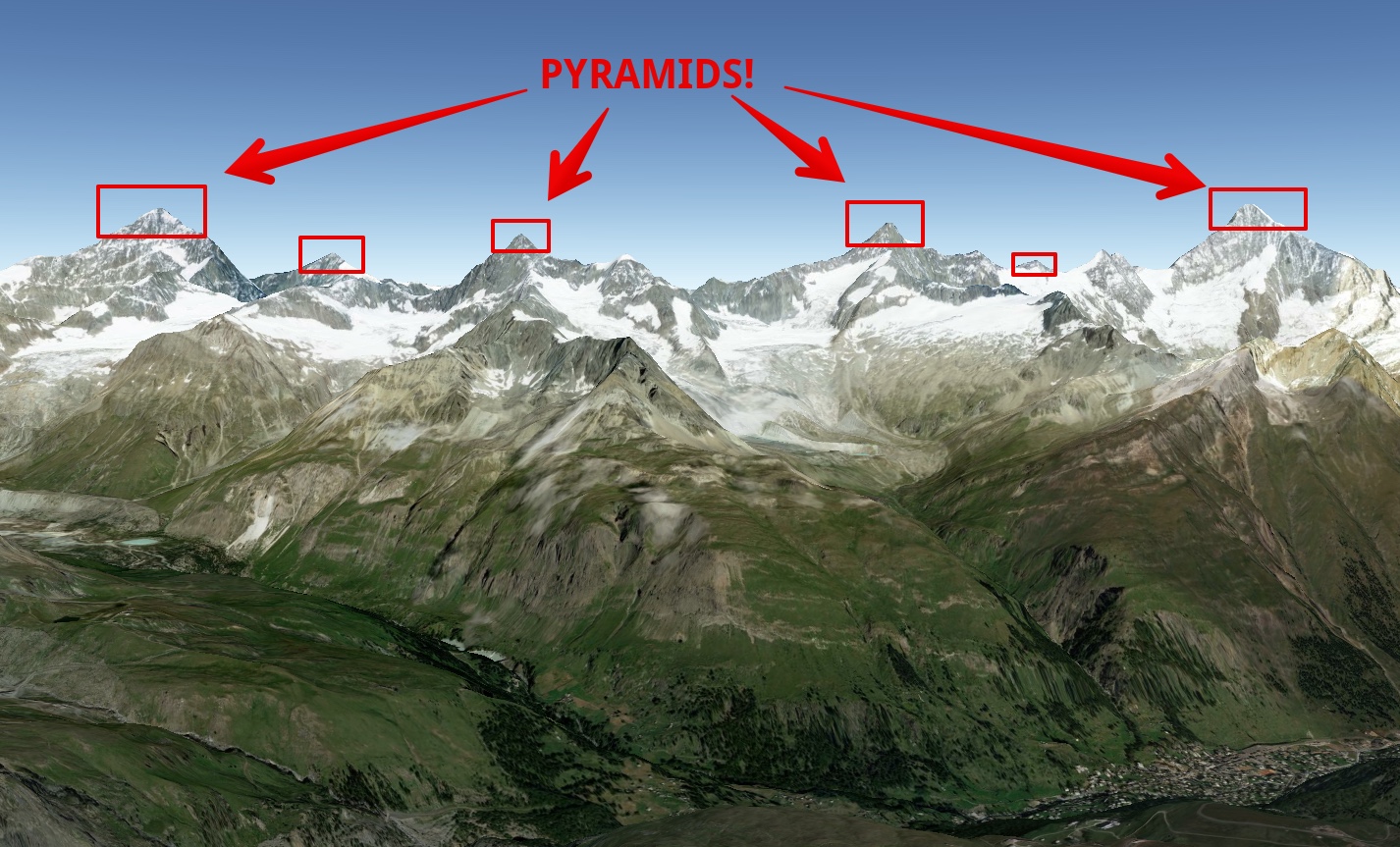 Earlier this year new life was breathed into the story, with an episode of "Ancient Aliens" in May 2016. 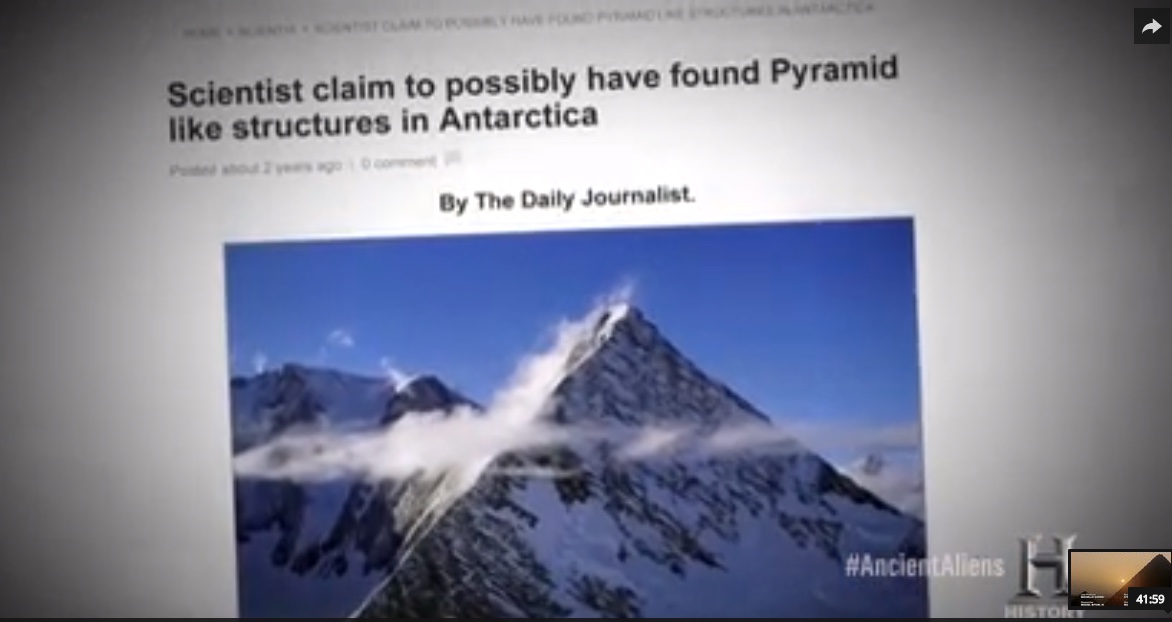 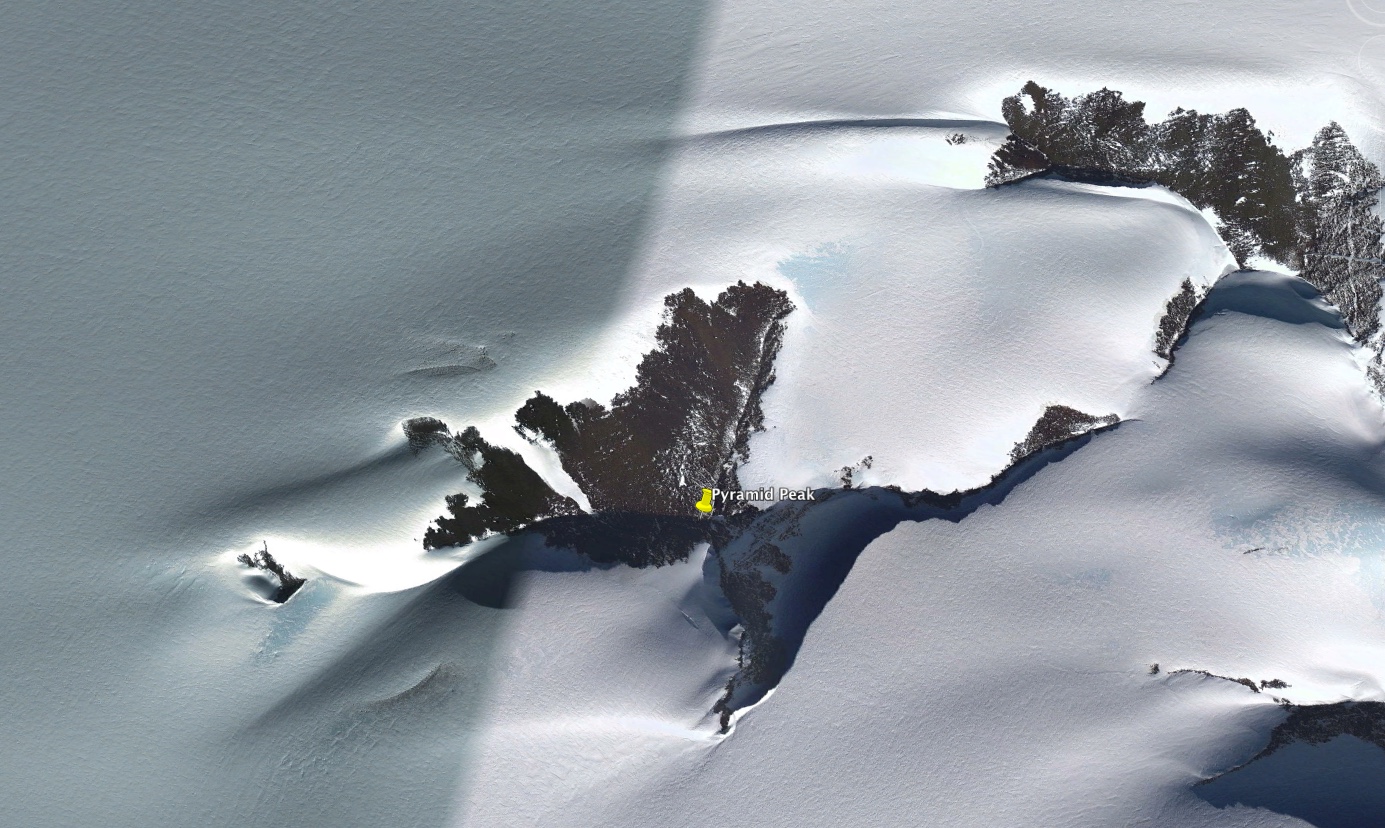 the photo is a stock photo by Gordon Wiltsie
http://www.gettyimages.com/detail/p...-peak-in-high-res-stock-photography/ngs8_0340

(The photos in the story however show Schatz Ridge)

The Daily Star being a typical example:

​
Now what I find most interesting about these new iterations of the fake story is that they often include the debunking! This seems to be something of a new trend (as far as I can tell) where purveyors of dubious news will lead with a sensationalistic headline based on some YouTube video, then spend several paragraphs with wild speculation, and then finally near the end of the article they briefly give the real explanation.

For example, in the Daily Star, we have the above "stunned scientists" headline, then:

Another theory for the Antarctic pyramids is that it could be a natural phenomenon known as nunatak – when mountain peaks appear up just above massive glaciers.

Is there a PYRAMID in the Antarctic? Bizarre theory claims an alien base is hidden in a huge triangular structure
...
It is unclear what the structure could be, but it looks similar to a nunatak – a natural mountain peak that juts up above glaciers

The perusal of Google Earth images of Antarctica have revealed pyramids on the ice-covered continent, prompting conspiracy theorists to speculate on their origin. Among some of the imaginative claims are that the formations are remnants of the lost civilization of Atlantis and that the pyramids were built with the help of aliens.
...
However, a geological answer has been offered to explain the mysterious structures as well. The pyramid-like formations could be extended rocky peaks known as “nunatak,” which are protrusions through ice or glacial crust of the peaks of mountains or rocks that stand higher than the terrain around it. Of course, the four sides of the pyramid, though seemingly artificial, are the results of natural erosive forces over millions of years.

"Burying the debunk" is a reference to the journalism term "burying the lede", a practice where the story starts out with details of secondary importance, and the actual substantive portion of the story is not mentioned until several paragraphs in. It's a way a media outlet could "cover" a story that they would really prefer just go away. They could still report the substantive facts without being accused of ignoring the story, but not many people would read them.

But in the fake news realm that's not exactly what is happening. Instead of "burying" the fact that this photo is just a nunatak, a mountain buried in snow, that fact has been deliberately added to the story to make the more sensationalist interpretation seem more plausible.

This seems counterintuitive, how could debunking a story make it seem more plausible? There are actually a number of reasons, but perhaps the most important is the idea of false balance. If just the sensational story is given then the reader might not give it much thought, just another crazy story. But if we are suddenly told that some scientist has an alternative explanation, then the reader is forced at some level to make a decision as to which seems more likely. They are presented with two alternatives (pyramid made by ancient aliens vs. odd shaped mountain poking through the snow), and they lean towards on or the other.

I noticed this technique used a couple of weeks ago in a story about "Chemtrails" in the Express.


SHOCK CLAIM: Chemtrails 'will wipe out humans' causing biblical-style floods, says expert
THEY'RE reportedly responsible for killing bees off in their billions and now it's been claimed Chemtrails could kill off human kind in just a few years, according to shock comments from a US expert.

[then down at the bottom]

The website Contrailscience.com aims to debunk the Chemtrails conspiracy theory.

It says that aircraft contrails are just what we have always been told they are - condensation trails.

The official definition is that when the air a jet flies through is cold enough (around -40C or colder), the air and exhaust fuel will instantly freeze and spread out into the clouds that are seen.

Here they actually gave quite a bit of space to the debunking. Perhaps because the crazy headline was so incredible that it actually required more debunking to achieve false balance and hence make the headline seem like a viable option. To some of the the conspiracy oriented the presence of a web site debunking a theory is often taken as evidence that the theory has prompted a response from the powers-that-be, and hence is correct.

So what should a debunker do? Should we avoid debunking things to stop the false balance? No, someone is always going to provide an alternative explanation that can be planted in the story to increase its plausibility. What we need to do is shift the balance away from the myth and towards the facts. If you are going to debunk a story like this, try to repeat the myth as little as possible, and start out with the facts - or at least get into the facts as quickly as possible.

The excellent Debunker's Handbook notes "The best approach is to focus on the facts you wish to communicate". Bury the myth.

I think "false balance" is a common factor in CT. It comes about when they hear the false claims repeated so many times (and maybe countered) in so many different places that it brings people into believing that there is a real argument going on.

Hama Neggs said:
I think "false balance" is a common factor in CT. It comes about when they hear the false claims repeated so many times (and maybe countered) in so many different places that it brings people into believing that there is a real argument going on.
Click to expand...

Or worse: "mainstream" science is often automatically mistrusted, so if a mainstream scientist says something is not true he/she is "probably trying to hide something".
You must log in or register to reply here.