Trump's Claim that "THE OBSERVERS WERE NOT ALLOWED INTO THE COUNTING ROOMS." 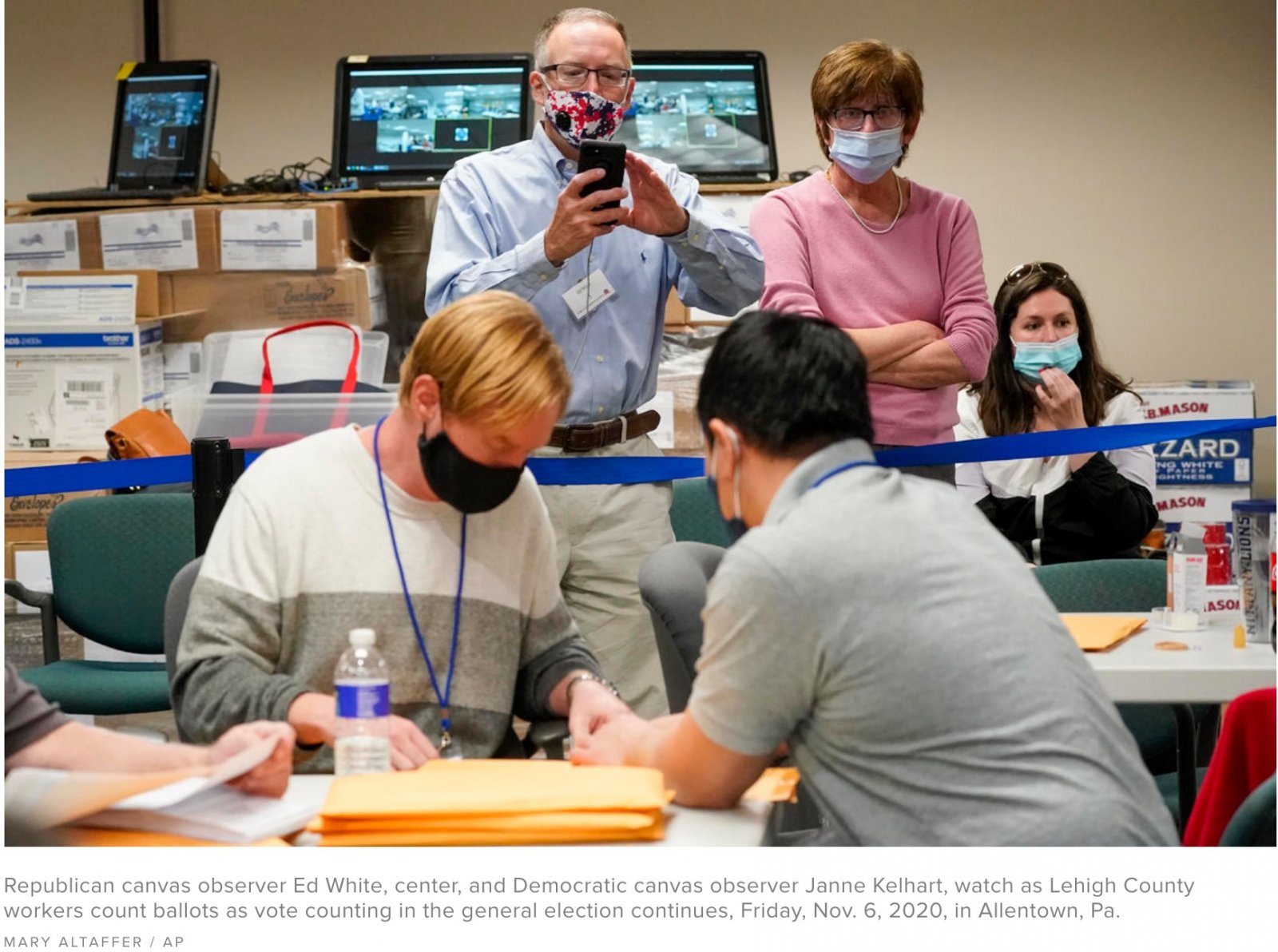 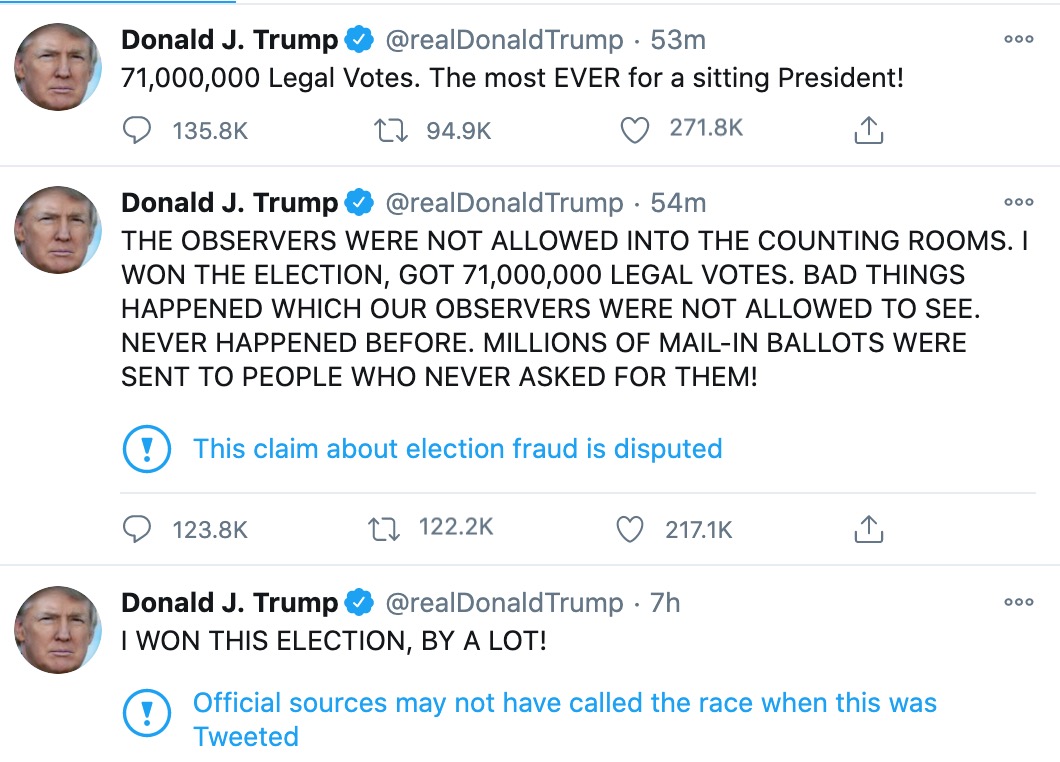 Trump has been claiming a bunch of things, but one that seems to be foundational to his argument, and repeated by Giuliani at the Four Season Total Landscaping press conference is the one about observers not being allowed in the counting rooms.

This is, of course, false. And so it has been addressed many times by different outlets. So I thought it would be useful to gather those analyses here:

The best account is the one from the Detroit Free press, which tells of far TOO MANY challengers, of both parties, and disruption of the process coming from some of those challengers.

"Help needed now," Tweeted a group called Stand Up Michigan. "Go as soon as possible. We are attempting to mount aggressive challenges."

Republicans showed up in droves. By 1 p.m., there were 227 Republican challengers freely roaming the floor where the ballots were being counted — almost double the 134 they were permitted to have — and more kept coming.

Another 268 Democratic challengers were there too — also double the permitted amount — and there were also another 75 nonpartisan challengers.

Shortly after 1 p.m. election officials shut the doors to the absentee ballot counting room and turned away all new challengers, even the ones who had stepped out for a lunch break.

At issue in the dispute is how far poll watchers are from the tables where officials are working, not whether observers are allowed. The Trump campaign argued observers were too far away, and a judge on the Pennsylvania Commonwealth Court ruled Thursday that they must be allowed within 6 feet of all ballot canvassing.

Philadelphia officials appealed the order to the state's supreme court, warning the lower court's ruling was wrong and "jeopardizes both the safety of the city defendants' canvass, plus the privacy of voters."

The city also said the evidence presented "makes clear that candidate and party representatives can observe every portion of the precanvassing and canvassing process."

Mr. Trump's own lawyers admitted there are representatives from the campaign in the convention center where ballots are being processed, according to CNN. During a hearing in a separate case filed in federal court, Jerome Marcus, a lawyer for the campaign, told Judge Paul Diamond "there's a non-zero number of people in the room."

This is because you have not investigated claims where they were not allowed within 30 feet in some cases .You seem to ignore claims of Postal workers whistleblowers ? or " A ballot observer in Detroit describes coordinated intimidation against Republican ballot observers, and the mysterious arrival of a van full of ballots at 4:00 AM."

Staff member
It's an incomplete list, as I got distracted by the lawsuit.
https://www.metabunk.org/threads/re...arding-maricopa-overvotes-and-sharpies.11447/

Joe said:
the mysterious arrival of a van full of ballots at 4:00 AM."
Click to expand...

Could you clarify where,possibly when, this allegedly happened. I'd like to look into it -- my google-fu is weak tonight, though, and I can't find a search phrase that cuts through the flood of articles about the election to pinpoint this incident.

JMartJr said:
Could you clarify where,possibly when, this allegedly happened. I'd like to look into it -- my google-fu is weak tonight, though, and I can't find a search phrase that cuts through the flood of articles about the election to pinpoint this incident.
Click to expand...

CLAIM: Video shows a man unloading ballots from a white van and using a red wagon to secretly haul them into Detroit’s ballot-counting center in the middle of the night.

THE FACTS: On Wednesday, as election workers tallied millions of mail-in votes in battleground states including Michigan, right-wing commentator Steven Crowder shared a grainy video of a man unloading something out of a white van, placing it onto a red wagon and lugging it inside Detroit’s TCF Center. “This only creates MORE questions about votes and ballot security concerns in Michigan,” Crowder tweeted. Social media users and conservative websites quickly seized on the video, calling it “highly suspicious” and claiming it showed a man smuggling illegitimate ballots into the facility “in the dead of night.” However, the local news station WXYZ-TV soon clarified the real explanation: The man was one of the station’s photographers, and he was using the wagon to carry his heavy camera equipment. “A conservative ‘news’ site reports catching a man wheeling in ‘suspicious’ equipment to the Detroit convention center, implying it was used to steal ballots,” tweeted Ross Jones, an investigative reporter for WXYZ-TV. “The ‘ballot thief’ was my photographer. He was bringing down equipment for our 12-hour shift.” In its fact check, the station also shared a photo of the wagon holding a Pelican brand camera case with a WXYZ-TV sticker on it.

Joe said:
" A ballot observer in Detroit describes coordinated intimidation against Republican ballot observers, and the mysterious arrival of a van full of ballots at 4:00 AM."
Click to expand...

The man with the van and trolley was WXYZ photojournalist Josh Bowren.

Josh Bowren gives an interview from 1:19. Video posted after image. 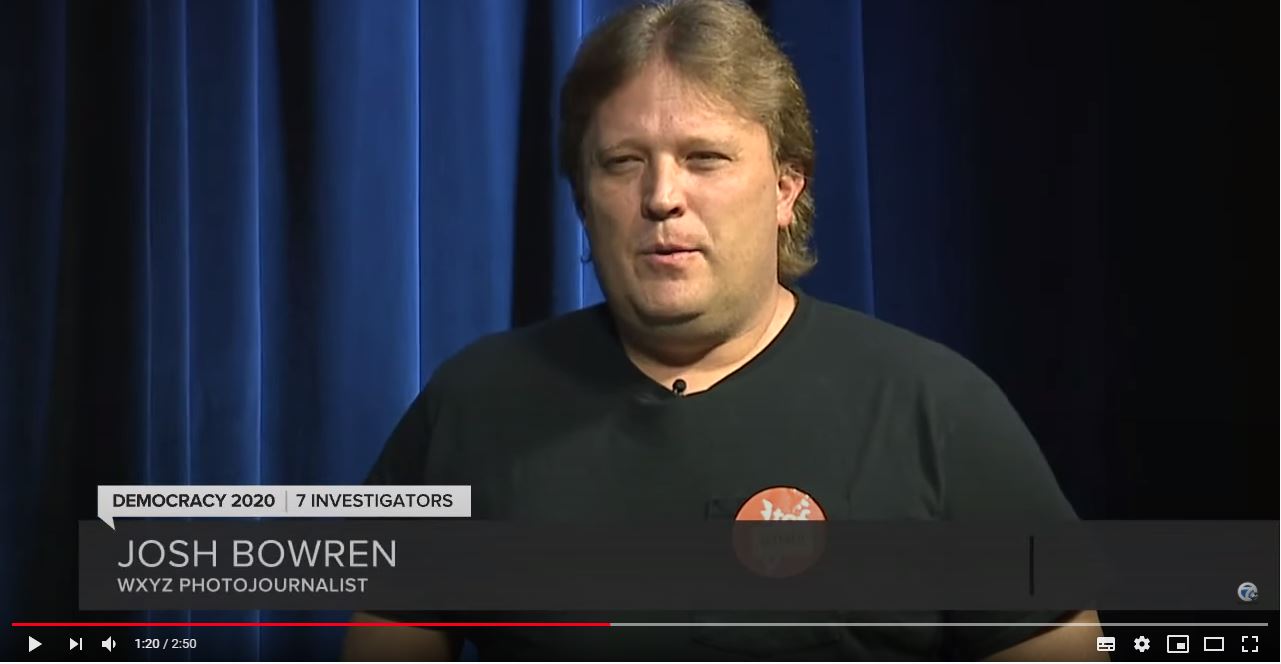 Joe said:
That is not what I was talking about at all , A poll watcher for the republicans said they were done at 1;00 am nov 4th , Her shift was till 5 am after 4 a van full of ballots showed up ( Not A Wagon) They counted them . There was a group of Intimidators that would move around the facility once a poll watcher questioned procedure , She is Asian and the report is in mandarin with subtitles .
Click to expand...

When you make such claims then please post links and articles. I'm sure that you will agree that it would be helpful. Over to you! Thanks.
You must log in or register to reply here.