No, those claim are not true: Two high-level officials with the Georgia secretary of state's office and a state elections board monitor each told Lead Stories that their investigations revealed nothing suspicious in the video. The officials said the ballots seen in the video were in regular ballot containers -- not suitcases -- and they had been removed from their envelopes and processed while news media and election observers for the Republican Party and Trump campaign were present. The media and party observers were never told to leave because counting was over for the night, but they apparently followed workers who left once their job of opening envelopes was completed, the chief investigator for the secretary of state told Lead Stories. The observers were free to return at anytime, she said. Georgia law allows observers, but does not require them to be there for ballots to be counted, she said.

I think it's a hopeful sign that this non-story seems to be the biggest thing that is being focussed on by those suspicious of the results. The video shows normal ballot counting, but is being portrayed as ballot stuff from "suitcases" of ballots. The Lead Stories article covers it very well, and there are others.


Here's what Fulton County Elections Director Rick Barron had to say about the surveillance video from State Farm Arena that has become a major point of contention among those who believe there was fraud in Georgia's election process:

"I'll just address the timeline of that evening - the staff at State Farm that evening, they began letting certain people go, no announcement was ever made to leave, for anyone to leave. Certain staff that were on the cutting stations, that were on the flattening stations, that were extracting from the inner envelopes, those staff left as work completed. I found out sometime, I think a little after10:30, that they were gonna cease operations and I told them not to do that... at about 11:15 they were fully scanning again, and once they were scanning Carter Jones, the State Election Board monitor, he told me 11:42 or 11:52 that he arrived. There were media in the room, external affairs representative there until approximately 11:15. The Secretary of States investigator arrived at 12:15, and they scanned until all the ballots they had available to scan were complete and then cleaned up the room.

"What the video shows is that they have pulled out plastic bins from underneath the desks, those are bins that they keep under their desks near the scanners. They will cut those seals that are on those, open those up and pull the ballots out.

"They were still in the process of cleaning so they hadn't sealed those ballot boxes up, so they were able to just start right back up, normal processing that occurred there.

"Other than that we've gone through everything with the Secretary of State investigators on that video and the timeline that evening."

A senior source in Raffensperger's office told Fox News that the video has been investigated and claims that it showed ballot fraud deemed unfounded, adding that Fulton County election officials had a designated observer at the location the entire time -- a practice that has been in place since June.

Raffensperger's office also debunked allegations that the ballots were stuffed in a pair of "suitcases" that one election official pulled out from beneath a table in the video, saying footage shows the ballots in the cases that they were supposed to be kept in.

What seems to be happening now is a rather tortuous process of people looking at the video and the timeline of events, and then not really understanding (or just misrepresenting) what is going on, saying there is fraud, and then having it explained to them. This works well for stirring up public support with disinformation sites like the reprehensible Gateway Pundit, who yesterday doxxed some poor election worker, probably forcing her to go into hiding. 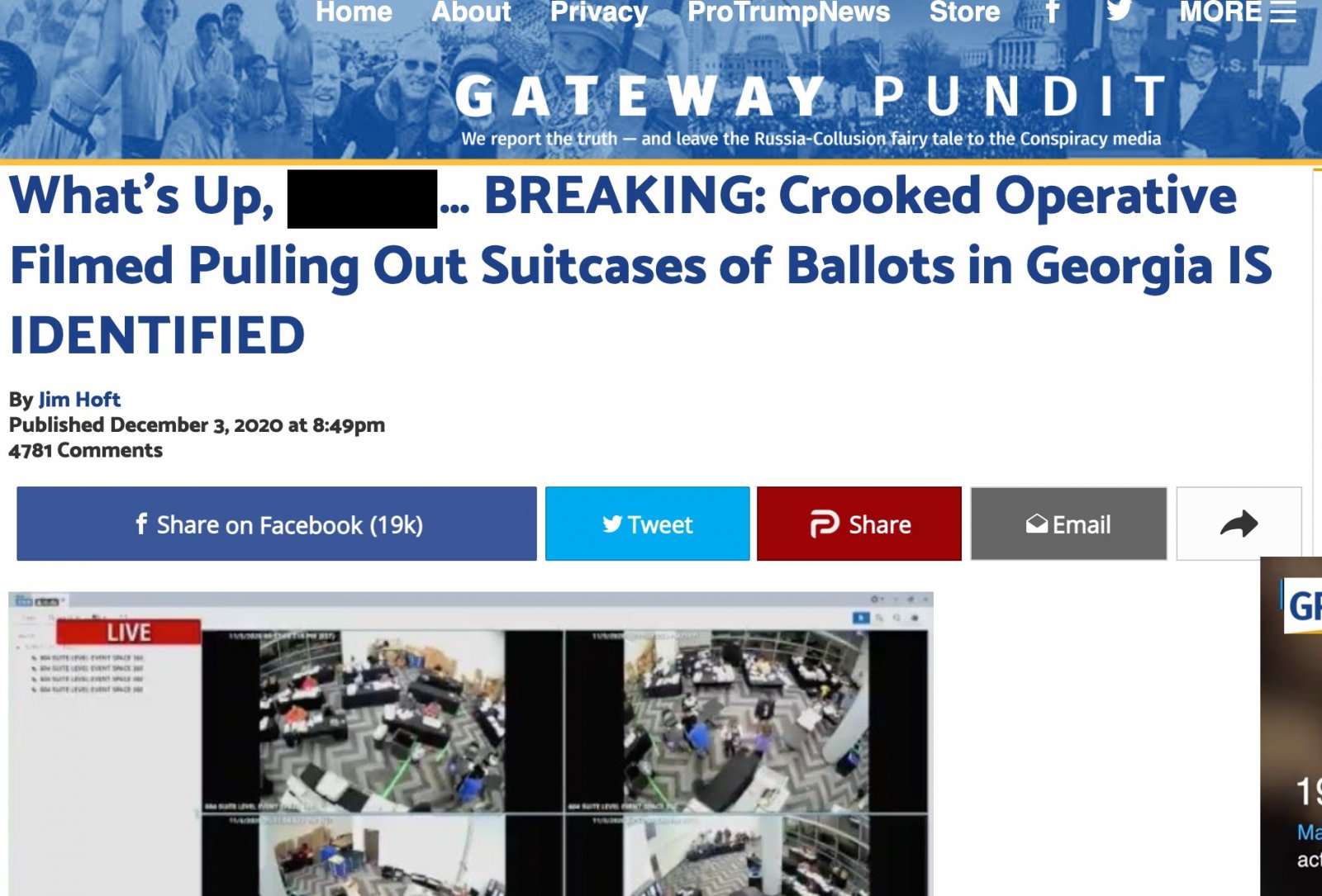 Giuliani sticking with this conspiracy theory, earlier this morning.

Georgia, of course, had the bombshell evidence of the tape recording of the election center with everyone chased out about two in the morning. Locked down. Five people left. Luckily the cameras were on; they didn't know it. And then they took ballots out hidden under a table all day; and then they spent the rest of the night counting the secret ballots. - and clearly secret phony ballots uh in which they excluded all republicans all democrats all law enforcement. And I think that ended up being about 148 000 to seven thousand. Hundred and forty eight thousand for Biden seven thousand for Trump. So you get a pretty good idea of how they cheated.


[You have to sift his words, but he's also claiming the Georgia General Assembly is going to overturn the election in their state by appointing new electors. This has been denied by the Governor, among others.]
Last edited: Dec 6, 2020
You must log in or register to reply here.