Executive summary: Rowbotham took the wrong conclusion that Polaris is visible from south of the equator from his misinterpretation of an article. His erroneous conclusion then was quoted by various flat earth publishers, including Eric Dubay who popularized the myth today.

These days, the myth is popularized by Eric Dubay's list of "200 proofs". The Polaris myth described here is often the "proof number 99" in such lists. 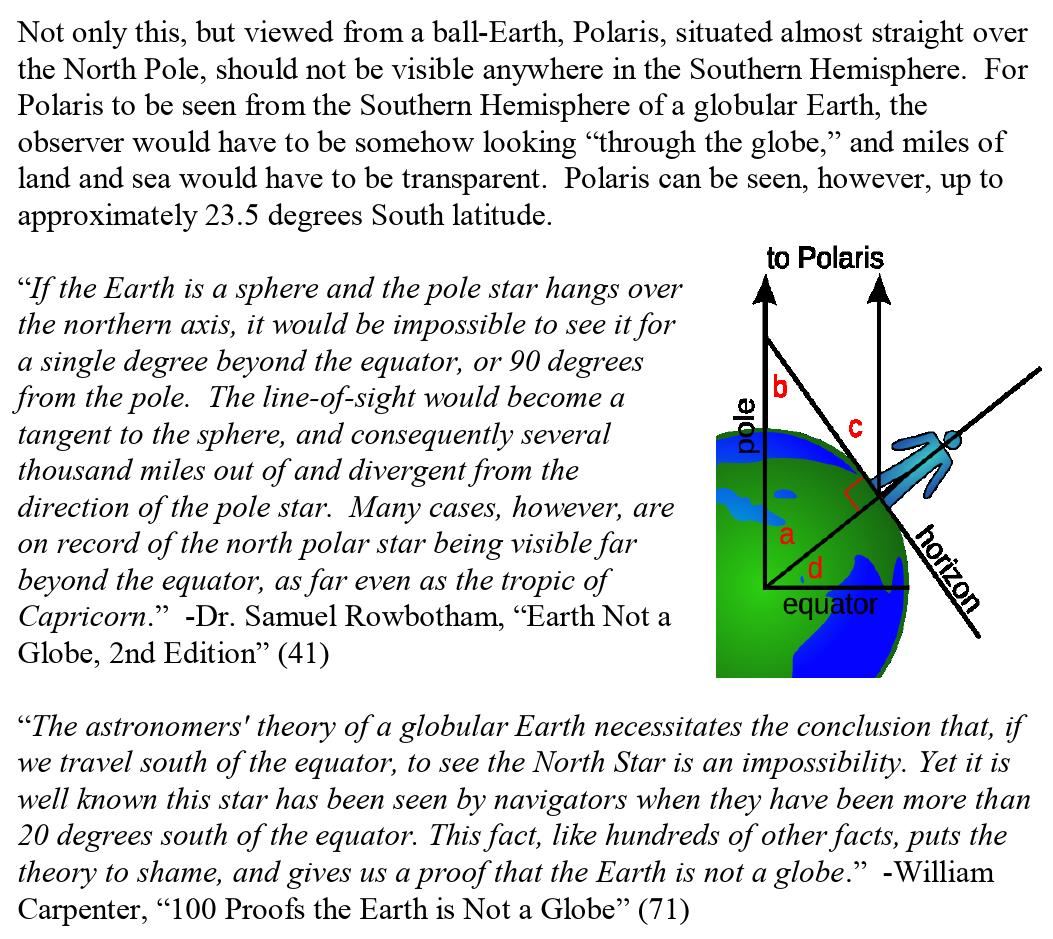 Quite obviously, Dubay did not actually observe it himself (otherwise he'll easily know Polaris is not visible south of the equator). He simply quoted books written by flat Earthers from over a century ago. 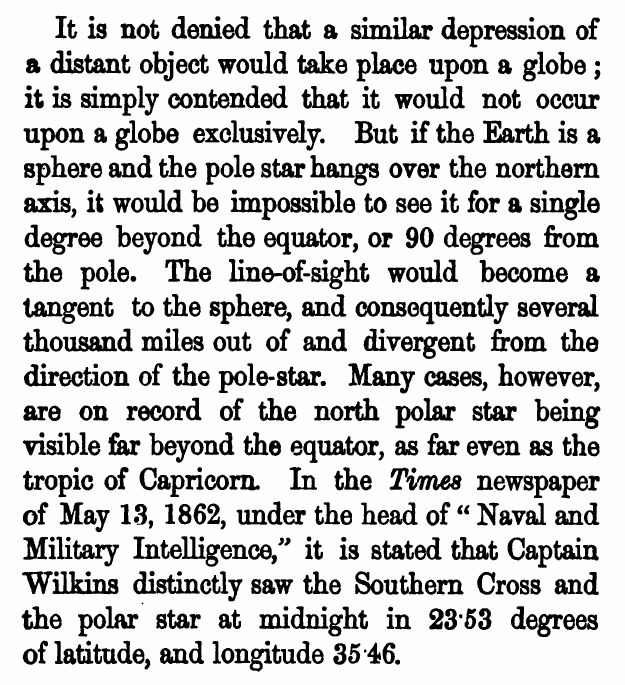 In turn, Rowbotham quoted the Times article, which is the first non-flat-earth related material in this chain of information. The original article is available in the Times archive (paywalled with a one-month free trial). This is the relevant paragraph: 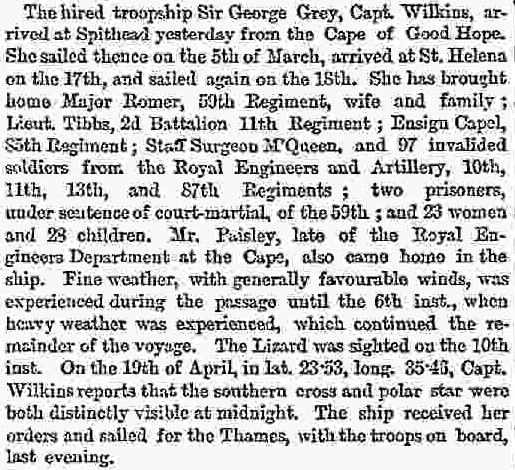 So, the ship was traveling from Cape of Good Hope to St Helena, and then to Spithead, England. On their way, at some point, they observed that the southern cross and polar star are visible in the sky. 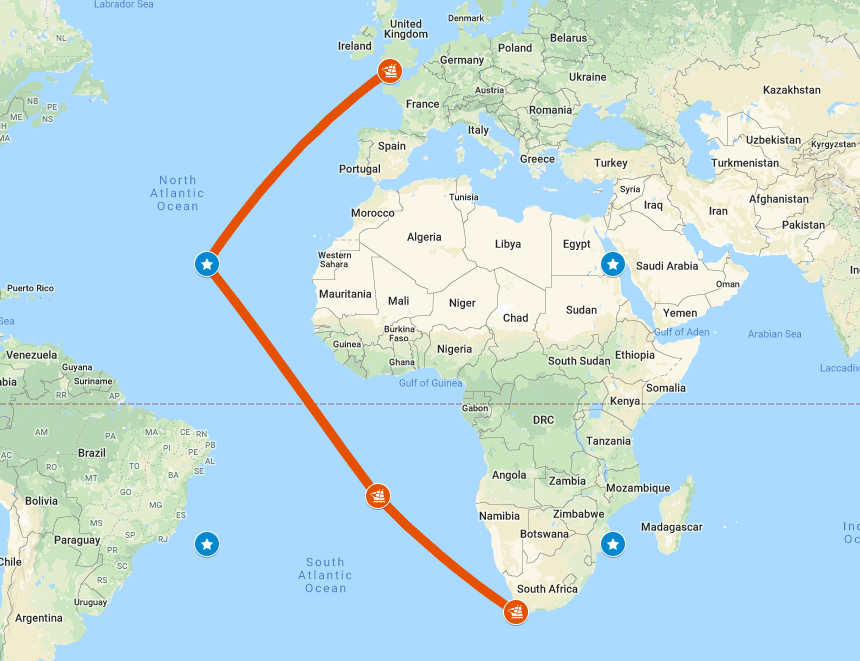 The four blue stars mark all the possible coordinates of latitude 23°53' longitude 35°46'. Rowbotham assumed the actual position of the ship where it observed Polaris must be one of the bottom locations. In reality, it is more plausible that the correct location was one on the top left, in the middle of the Atlantic Ocean, north of the equator.

These are how the night sky appeared at the time in that location. Looking north, Polaris was visible: 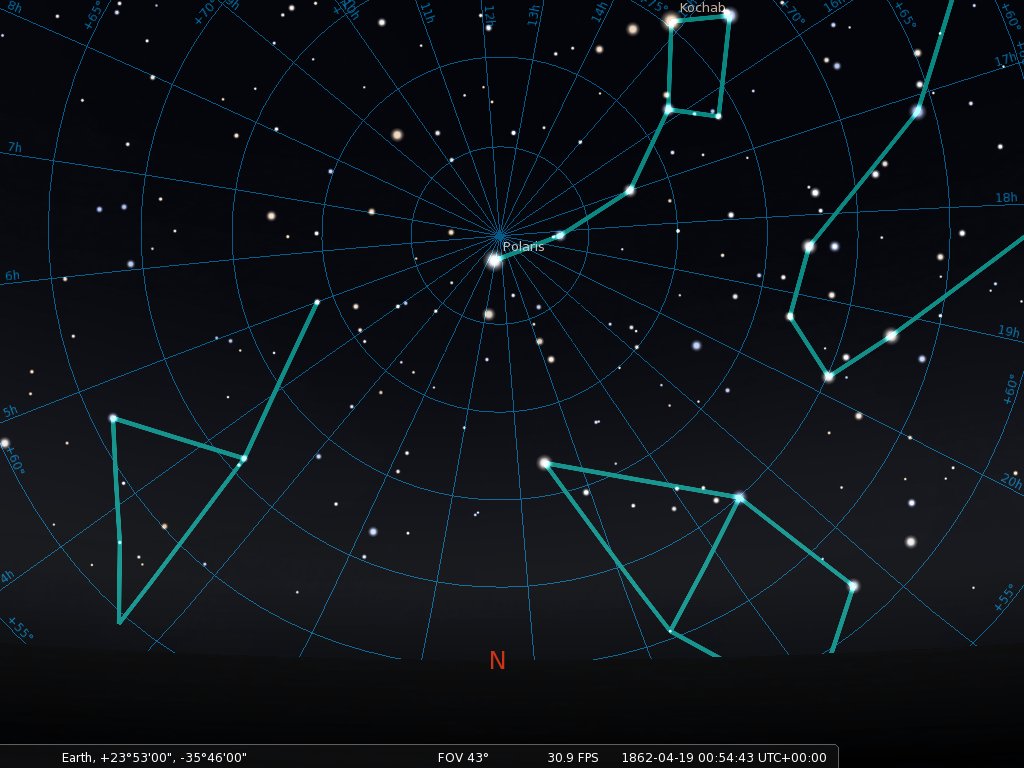 And looking south, the southern cross was also still visible: 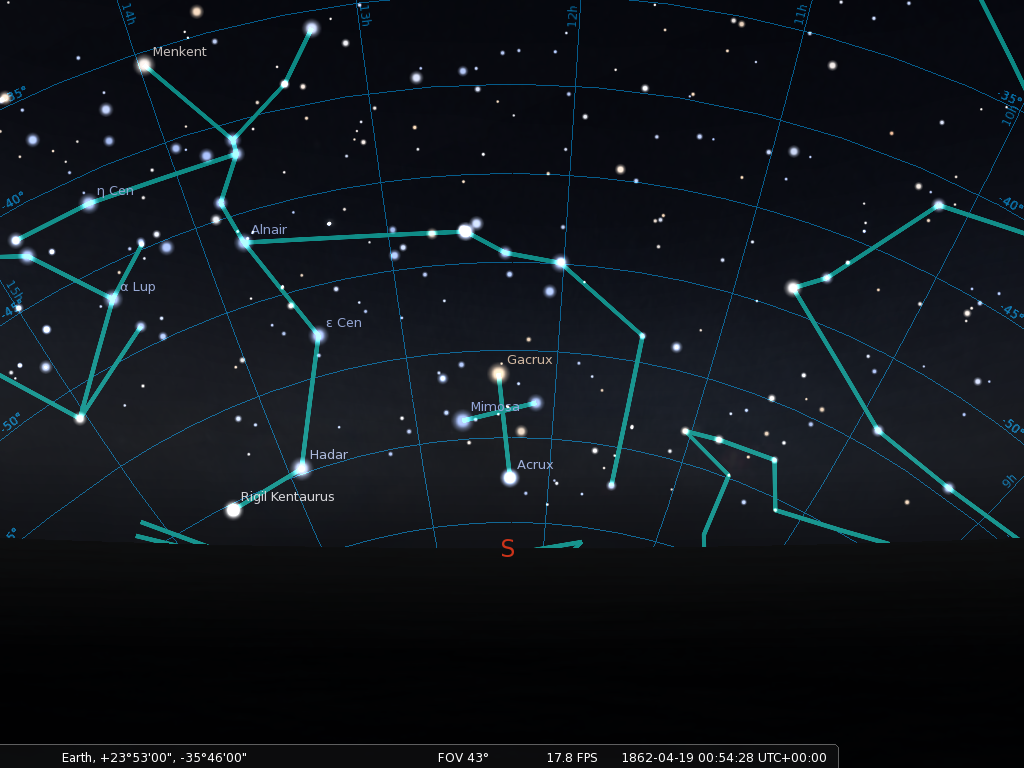 Aside from the missing sign, the Times' article was accurate. The myth that Polaris is visible from south of the Equator was simply from an erroneous inference made by Rowbotham. He assumed the observation was done in the south of the equator. In reality, it was done comfortably north of the equator.

So much for the claim that "using zeteticism one bases his conclusions on experimentation and observation". The myth spreads in the flat Earth community like wildfire, from book to book, without any attempt to verify the facts themselves.

Splendid research! Just a point of terminology: in old-fashioned English, the term 'inst.' was used as an abbreviation for 'in the present month'. So in the Times article dated 13 May 1862, the references to the 6th inst. and the 10th inst. should be interpreted as dates in May. Putting together the dates in the article, we get the following timeline:

5 March - left Cape of Good Hope (approx. 35 degrees South)
17 March - arrived at St Helena (approx. 15 degrees South)
18 March - left St Helena
19 April - the date of the observation
6 May - 'heavy weather'
10 May - Lizard sighted [the Lizard being at the south-west tip of England, approx. 50 degrees North]
12 May ('yesterday') - ship arrived at Spithead (on the south coast of England).
12 May (evening) left Spithead for the Thames (presumably London).

Note that in this timeline by 17 March the ship is already north of the Tropic of Capricorn, where Rowbotham assumes the observation to have taken place on 19 April. If Rowbotham were correct, after leaving St Helena the ship must have spent a month pootling around the South Atlantic, with a net movement of about 8 degrees to the south, before making a sudden dash north to reach England in less than a month!

Outstanding work -- this is genuinely "doing your own research" on the subject.
You must log in or register to reply here.