Abstract:
Solar radiation management with stratospheric sulfur aerosols has been proposed as a potential geoengineering strategy to reduce global warming. However, there has been very little investigation on the efficiency of specific injection methods suggested. Here, we show that using stratospheric passenger flights to inject sulfate aerosols would not cause significant forcing under realistic injection scenarios: even if all present-day intercontinental flights were lifted above the tropopause, we simulate global surface shortwave radiative forcings of − 0.05 W m−2​ and − 0.10 W m−2​ with current and five times enhanced fuel sulfur concentrations, respectively. In the highly unlikely scenario that fuel sulfur content is enhanced by a factor of 50 (i.e. ten times the current legal limit) the radiative forcing is − 0.85 W m−2​. This is significantly lower than if the same amount of sulfur were injected over the tropics ( − 1.32 W m−2​, for 3 Tg (S) yr−1​) due to a faster loss rate and lower intensity of solar radiation in the northern midlatitudes where current flight paths are concentrated. We also predict lower global forcing in northern hemisphere winter than in summer due to the seasonalities of the solar radiation intensity at midlatitudes, the related OH chemistry that produces sulfate aerosol, and removal of particles.

Note that's with all flights raised above the tropopause, and with the high sulphur fuel in ALL flights.

Putting those numbers into perspective, the 5x sulfur give 0.1 (hardly a dent). 50x would be more significant, but that huge increase in sulfur would have other problems. 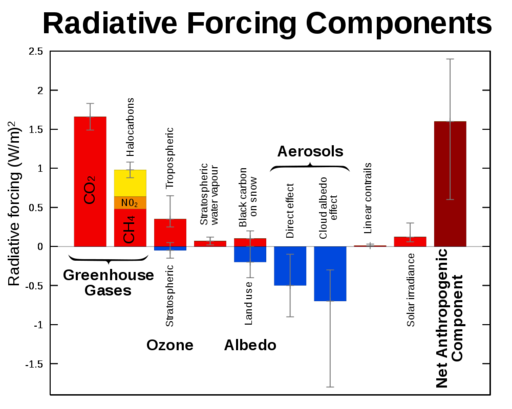 But . . . what if there are dedicated flights that boost the aerosol concentration of sulfur compounds in addition to the domestic laced sulfur fuels. . . would it not greatly reduce the amount of dedicated injection required . . .

They are predicting that sulfur emissions would be 0.12% of the fuel burned. If there was a deliberate geoengineering program using a separate sulfur tank and a separate spray nozzle, the amount of sulfur injected would probably be more than 50% of the amount of fuel burned, depending on the specs of the plane used. Of course, there are a lot of passenger flights and the aircraft would not have to be dedicated to geoengineering.
You must log in or register to reply here.

Eruption of Kilauea Volcano in Hawaii – Conspiracies and Science

Debunked: Global Dimming vs. Global Brightening, as evidence for Geoengineering or Chemtrails
2