I was inspired by the line above.

From the conspiracy circles we're hearing the terms hoax, fake, set up etc, to describe live tragic events. We are not hearing HOW that could be implemented. So! What would that entail in practical terms for say the Boston Bombings to be fake injuries?

Firstly we've a line of command from the top decision maker to the guys on the ground. There has to be a plan, funding, acquisitions, personnel, organisation and implementation. As you could imagine that's many people in many different departments. A pyramid effect of involved personnel if you like. There's obviously more to take into account but this opening post is definitely not all encapsulating. After all this is just a back of the envolope hypothesis.

Some of the accusation of Boston have been from a “closed film set” to “planted actors and crisis actors” in the crowd. For this to work there would need to be a film production of types. Private contractors or government departments it matters not as the principle to this remains the same.

In a production there's various departments, casting, location, props, film, wardrobe, script writers, and roadies to name a few. Casting crews would typically be dealing with advertising and or actors agents, actors, audition location, auditions and hiring. We could follow this line of description through every department, all the way through to dress rehearsals in some secretive location. Without going into every facet which I honestly don't know to much about I am demonstrating the overwhelming numbers of people being involved. If we include the whole of the crowd at the finish line area we could be close to another thousand people. Plants in the crowd makes the hypothesis easier to carry out but massively open to discovery.

Here's where things get a bit funky with reality... if they haven't already. The first bomb goes off. The crowd takes to it's heels and the second bombs goes off. In a split second the actors disperse fake blood everywhere. The crisis actors shed and hide their clean clothes and fake limbs. They manage to do all this without a single video, film or still camera capturing this. They also manage to keep every shop worker / owner and marathon runner occupied enough not to see this. They also manage to stop any real witness from being in that area seeing this.

“Ah! but! It was a closed set. Filmed at another place and cut and pasted over the real venue”...I hear the conspiracists say.

Do you mean with technical trickery “they” filmed an action scene and released it to the press? OK! Lets run with both ideas but keep in mind the principle of production above still applies.

Now we're at the stage where the first aiders / responders get to the rescue. All these people would have to be complicit. If not they would report the fake injuries. As would the police, ambulance crews, nursing staff, hospitals and surgical theatre teams.

Without the injured being real, without them being picked up at the scene, without them being admitted into local hospitals the hoax, fake, set up plan would rapidly unravel. An ambulance crew, a nurse, a doctor and even a hospital porter would report no such persons were admitted / treated. No such emergence was catered for. Likewise the damage at the scene would also have to be real for similar reasons.

“Yeah but the media are in on it”...I hear the conspiracist retort. What? Every TV channel, radio station, news paper, paparazzi not just in state or country wide...but world wide?
There is no way in practical terms for the Boston Bombings to be faked in any way. Even if the props could magically have been dispersed in a split second timing. To contrive such a plan and implement it in total secrecy is impossible. If you were somehow involved in this illegal act by government would you expose it? I know I would.

Another way of thinking of things is like this. Of all the professionals, scientists, academics, generally bright people and the vast majority of people of the world, how come ONLY a small percentage of internet users have managed to bust events like 7/7 Boston and Woolich wide open as a conspiracy? Do conspiracy theorists really have a special talent, have the edge over everyone else, or is it more psychological?

I would like to see the opinion of a Conspiracy Theorist about to the practicalities outlined above.
Last edited: Sep 14, 2013

But you are missing the point that it makes for a good story. Any understanding of the practicalities just get in the way.

Staff member
Conspiracy theorists get around the "practicality" argument by saying "I'm not suggesting anything, I'm just asking questions"

@Grieves characterizes this approach to debunking as "tell me a story so I can mock it". Which I think has a smidgen of validity. But I don't think that the lack of viable alternatives to the "official" story is something that can be entirely ignored.

David Fraser said:
But you are missing the point that it makes for a good story. Any understanding of the practicalities just get in the way.
Click to expand...

For certain conspiracists, the die hards, that's true. However, one size does not fit all. I think it's a reasonable arguement when it comes to debunking, especially fence sitters and people of a, lets say, more grounded disposition.

Staff member
Yes, I think that people should be encouraged to consider the wider implication of what their "just asking questions" actually suggests.

The "Bielefeld-Verschwörung" (Bielefeld-Conspirancy) claims, that the average german City Bielefeld doesn´t exist in reality. Every German has heard about this city and everybody knows somebody who claimed to be there. But is there any proof?! 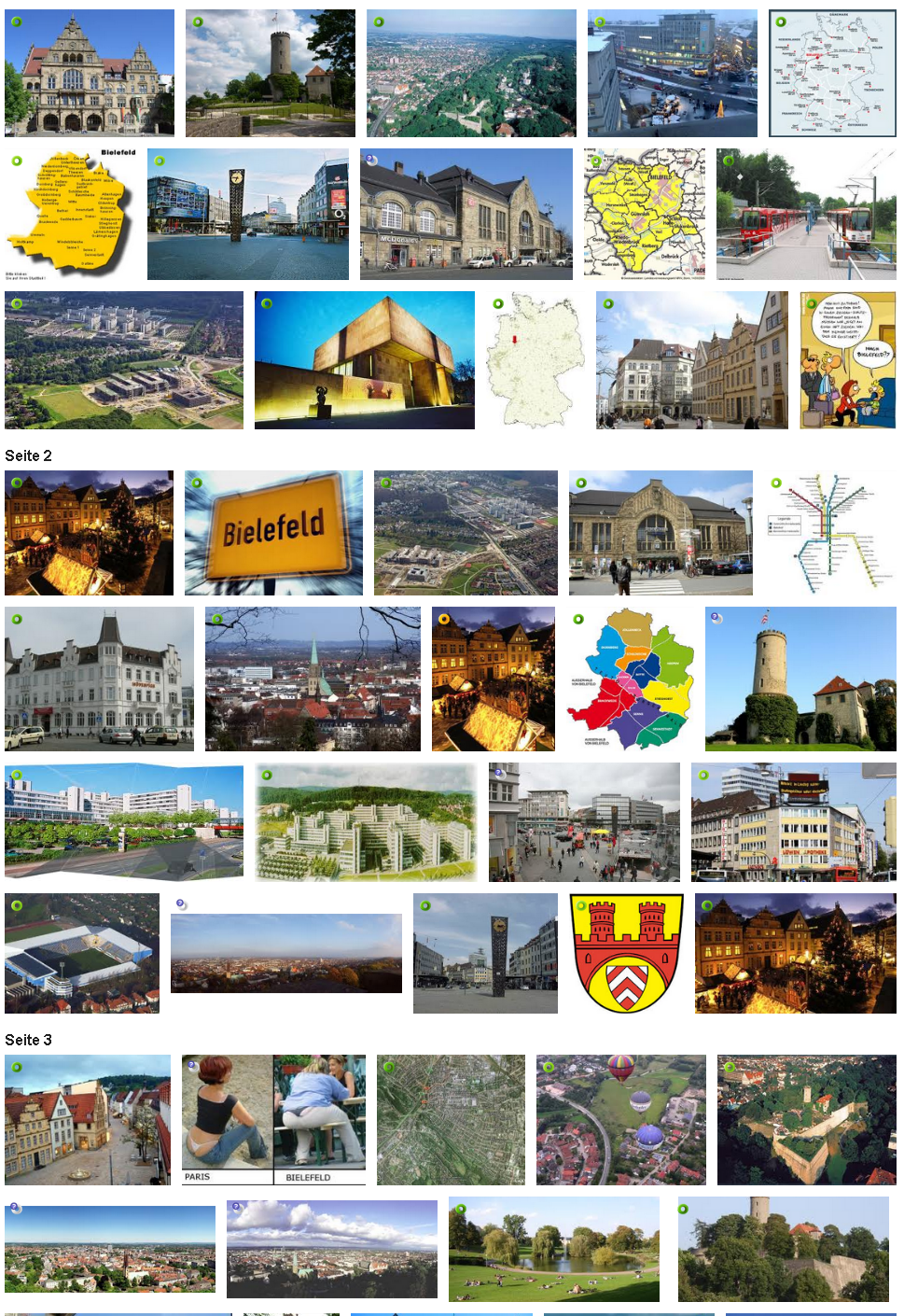 THEY (Bilderberger, Rothschild, NWO, Satanist - insert your prevered Enemy here) have build something that looks like a city just for hiding all the evil things they do from all the other conspirancy-Theories. THEY are using the City of Bielefeld to coordinate their Inside-jobs.

... the "Bielefeld-Verschwörung" is a running gag by german sceptics. It works´just because every German sometimes has heard about this City, but it will not be important enougth for a deeper view. Bilelefeld was hardly wounded in WW2 and fastly rebuild without any Attraction for Tourists, these Buildings are looking artifical (because they where build fast).

The (real) City of Bielefeld has no Attractions, so it is the perfect Place for the claim that THEY build this city just for doing something.
Last edited by a moderator: Nov 20, 2013

I've never heard of this. It's that bad its brilliant Thinking about it ... anyone could have photoshopped those pictures

You'd think if there was any "paint" involved, my friend or his colleagues would have found it when they were helping victims at various Boston hospitals.

ColtCabana said:
You'd think if there was any "paint" involved, my friend or his colleagues would have found it when they were helping victims at various Boston hospitals.
Click to expand...


That's just it isn't it? If there was paint / fake blood equally there wouldn't have been any victims in the hospital. Both senerios would have caused an uproar

I have a friend who, similarly, singlehandedly maintaned a theory that the town of Eccles didn't exist.

I'm still not sure why.

Paint? Paintballs?
Wouldn't they be smart enough to use fake blood?
You can buy the stuff at your local costume shop and some of it actually looks real and has a pretty similar consistency as blood. I've used it a lot for Halloween costumes and various pranks.
But the idea of paint or paintballs is downright silly.

Well yes, but are you saying fake blood has some merit?

Pete Tar said:
Well yes, but are you saying fake blood has some merit?
Click to expand...

No, I'm saying if you think someone is capable of pulling off a scam this big in front of the world on television, they would be a little more intelligent and not use paint as blood. Whoever came up with this conspiracy may as well believe they used ketchup or marinara sauce.
I'm just saying paint/paintballs has 0 merit and when there's such a thing as fake blood that's supposed to imitate real blood, why would this not be the first choice for a conspiracy theorist?

You're right.
Maybe because a paint ball is orders of magnitude 'faker' than fake blood and implies a game as well. That's how they want to see it.

Pete Tar said:
You're right.
Maybe because a paint ball is orders of magnitude 'faker' than fake blood and implies a game as well. That's how they want to see it.
Click to expand...

You mean a pseudo-conspiracy designed to make the serious CT's look bad?
It's possible, but don't underestimate people's ability to believe in really weak theories when it suits their emotions.
They don't bother thinking any step further than the surface if they don't want to.
It's almost a matter of pride to claim belief in anything contrary to popular perception.

But not all conspiracy theorists are as super-intelligent as the supposed masterminds, or even as intelligent as you, so surely it would be quite reasonable to expect some theories to crop up that are actually quite silly when you think about it?

Pete Tar said:
You mean a pseudo-conspiracy designed to make the serious CT's look bad?
It's possible, but don't underestimate people's ability to believe in really weak theories when it suits their emotions.
They don't bother thinking any step further than the surface if they don't want to.
It's almost a matter of pride to claim belief in anything contrary to popular perception.
Click to expand...

One of my shipmates rambled on last week at dinner about how there is a number on each bottle of Tabasco hot pepper sauce, and the rumor was that the higher the number, the hotter the particular batch of sauce would be. He seemed quite proud of having this knowledge.

Then I asked a simple question, "So, which is more likely, that the bottle was made after the sauce was tested for it heat, or does it really make more sense that the number on the bottle is just a batch number for the bottle mold?"
The rest of the fellows around the mess table started to catch on, and eventually I explained that I had already looked up that particular rumor.
I have also been to the factory in Louisiana and am a pepper sauce fiend, but saw that even though they age their sauce in barrels, they mix those barrels in huge batches before bottling, and it's unlikely to have a perceptible difference in strength.

The guy who came up with the idea really had wanted to possess special knowledge, but hadn't exercised any common sense thinking about which came first, the numbered bottle or the sauce.

I do like that idea though, it's kind of romantic.
You must log in or register to reply here.

Assuming you are an ET: How would you identify nuclear technologies without direct knowledge?