People Blaming Bad Weather on Side Effects of Technology Through History

Staff member
I found this in The Times archive from 1954. Presumably the fact that Dr Sutton needed to rule out condensation trails as a cause for bad weather means that people were theorising about them even then.

For context, 1954 was a terrible summer in the UK, so people may have been looking for causes to blame:


1954 set the record for the highest rainfall in any one year at one place in Britain: 6527 mm at the aptly named Sprinkling Tarn (Cumbria). It was one of the worst two extended (which includes May and September) summers on record (the other being 1931), and one of the worst summers of the century. There were only 28 days with a maximum above 21C in London, and only one in Belfast, Edinburgh, and Plymouth. In some places April was the sunniest month of the year, and the next month to have more sunshine than average was September. Overall, it was a very wet year.

Staff member
Very interesting that besides contrails being blamed for bad weather, people were also blaming radio broadcasting, and even railways.

This all comes from the natural variability of the weather, people not realizing how much the weather naturally varies (because of the long time scales involved), and the human desire to look for patterns in random data.

Staff member
By "things" here I was thinking more along the lines of technology things (I named this thread when I moved the OP). People have always been blaming it on God.

I've edited the title to make this clear, replacing "things" with "side effects of technology" 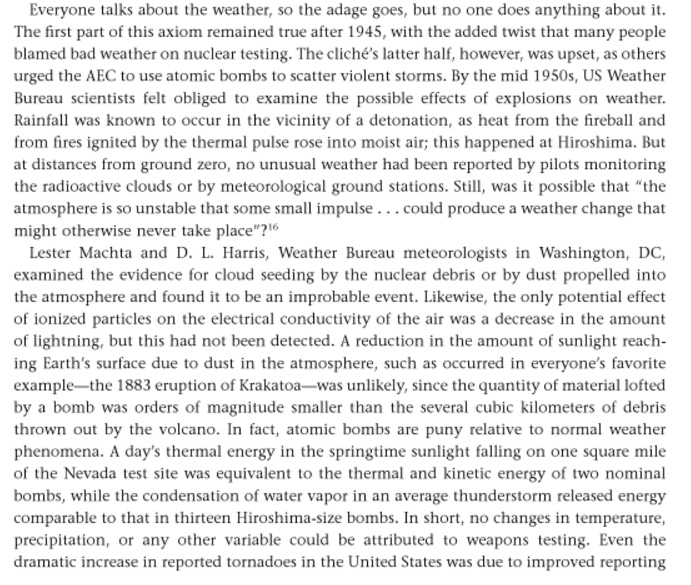 Staff member
This is largely just another "angry god" story, but it's too bizarre to pass over, and is kind-of a new technology story. Yo-yos were banned in Syria in 1933 for causing drought. The modern yo-yo had just been re-invented a few years earlier in 1928.
https://news.google.com/newspapers?id=vMskAAAAIBAJ&sjid=5g4GAAAAIBAJ&pg=3304,158839

The story has been repeated (here by climate change commentator Marc Morano) without the context of the yo-yos bringing "Allah's displeasure", which makes it look like people though that the yo-yos themselves somehow caused drought, which makes less sense than most things.

In 1846, aborigines blamed bad weather on the introduction of the white man. In 1933, Syria banned the yoyo because they thought it caused drought. During WW2, many people thought the war caused bad weather. In the 1970s bad weather was blamed on global cooling. Now they are blaming our SUVs and modern way of living for bad weather. Bad weather happens all the time.