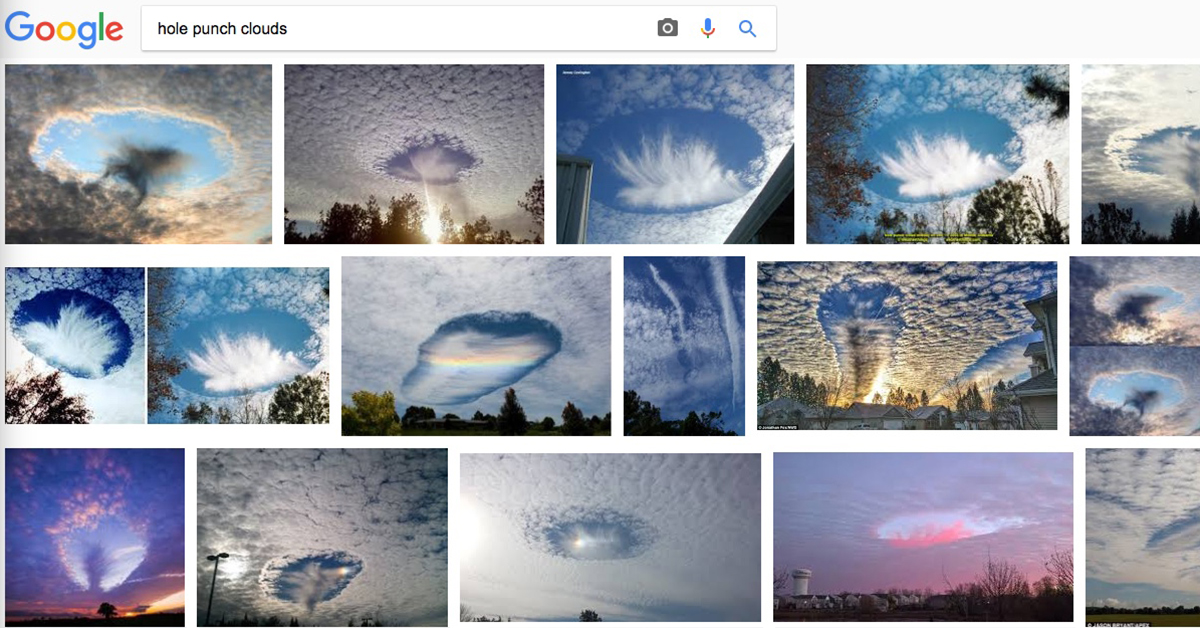 Hole Punch Clouds, Canal Clouds, and Fallstreak Holes are all names for an interesting cloud phenomenon where a hole forms in a thin layer of cloud, usually with a streak of cloud falling from the middle of the hole. They are relatively rare (I see them a few times a year, and I watch the sky a lot) but also very photogenic, so a Google image search shows up lots of nice examples, see above.

Hole punch clouds form when a layer of supercooled liquid water cloud is disturbed by something (usually a plane) and this triggers freezing of the droplets, which further disturbs the layer, causing more freezing. The resultant ice crystals are composed of the water from several drops, so are heavier than the surrounding cloud and fall out. This is the "fallstreak" you see in the middle, it's essentially snow.

Generally hole punch clouds are formed by an aircraft passing through the cloud layer, and the angle at which it passes through determines the shape of the hole, the shallower the angle, the longer the hole. When the hole is very long (if a plane happens to be cruising at the same altitude as the cloud, or is just climbing or descending very slowly) then this creates a long hole, sometimes referred to as a "canal cloud". These can be quite long:

I was recently asked on Twitter if these hole punch clouds showed up in old books on clouds
Source: https://twitter.com/FleshnChrome/status/812474808852049920


But I thought it might be interesting to look at the history of these holes. They have only been occurring with some frequency in the same timeframe as contrails, since they are largely triggered by airplanes. However they could be triggered by other thing, depending on how ideal the conditions are. Precipitation from higher clouds might do it, even the passage of a bird, or something from below, like a forest fire. So along the lines of similar threads on contrails, or halos and sun dogs, what is the history of observations of hole punch clouds?

The example I posted on Twitter was from 1972, the book Clouds of the World, by Richard Scorer, page 105. 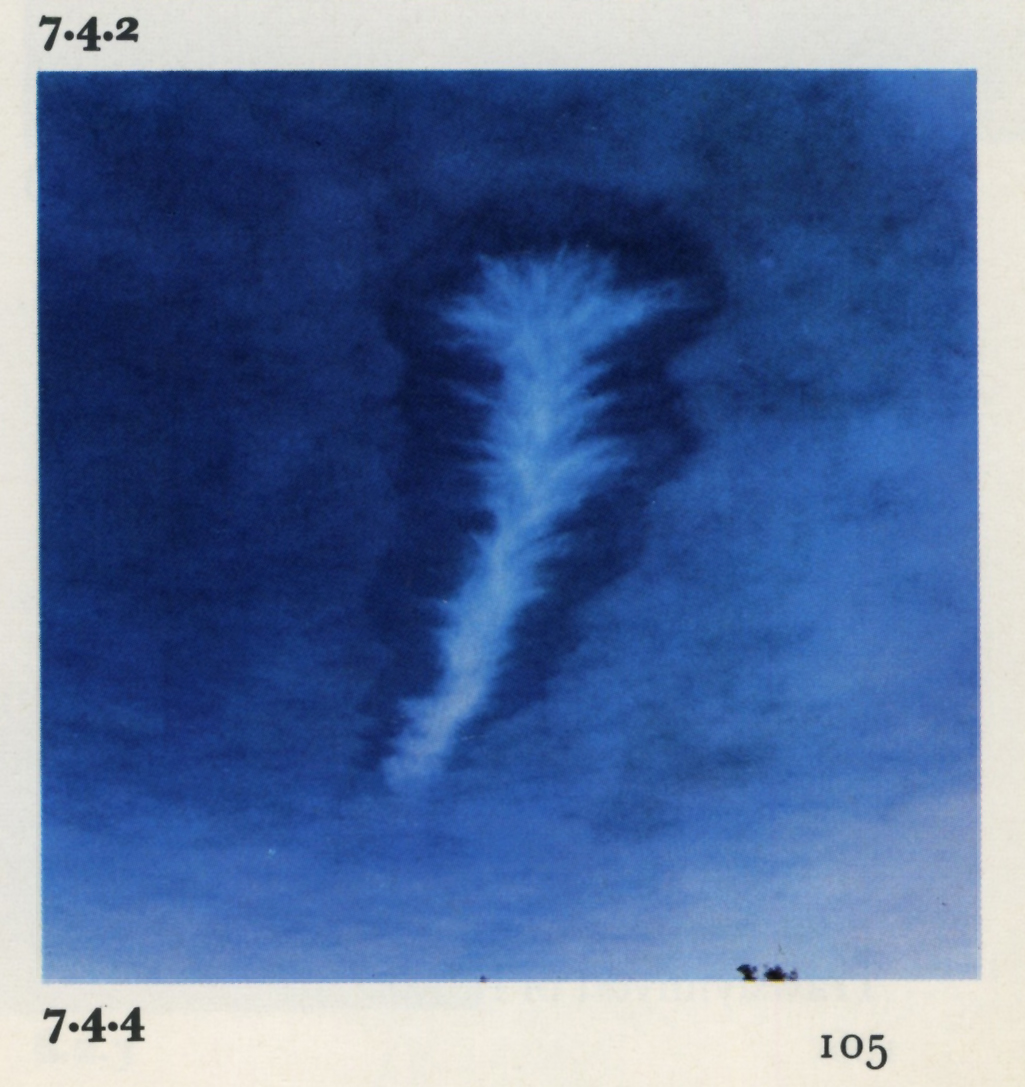 7.4.4. This looks like a hole formed by the natural glaciation of a layer of water cloud. Once nucleated the cloud is like that shown in 4.3.5

"glaciation" here essentially means freezing, and "nucleated" refers to the fact that the ice crystals act both as condensation nuclei for water vapor still in the air, and as freezing nuclei for any water droplets they come into contact with. (The above photo is by H. H. Samuelson, and also appears in Scorer's Environmental Aerodynamics, 1978, Page 425)

The 4.3.5 referred to is this interesting example, seemingly of four linked holes. Also predating 1972. 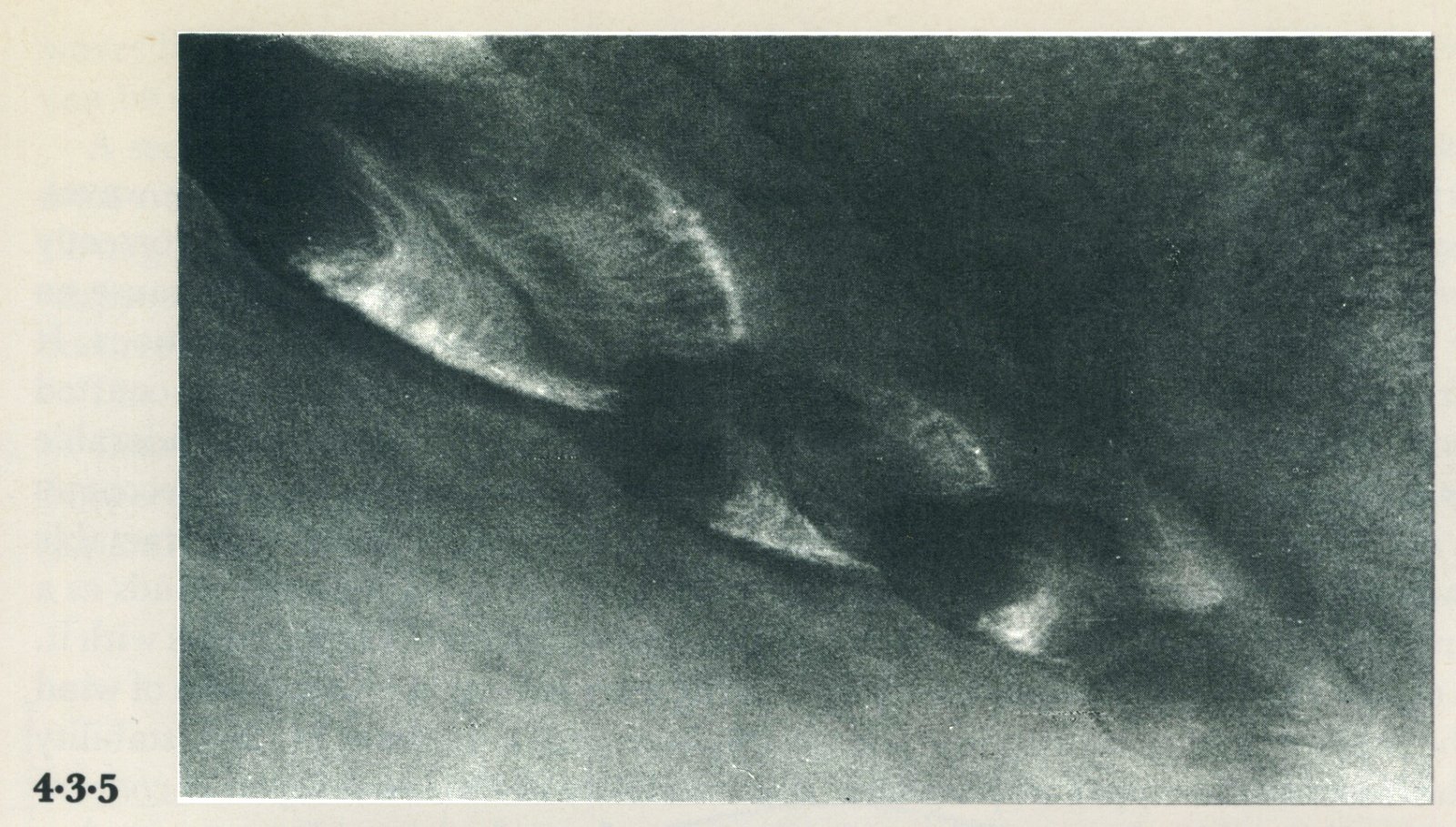 A much earlier example comes from the book Cloud Study, A Pictorial Guide. by Scorer, et al, published in 1957 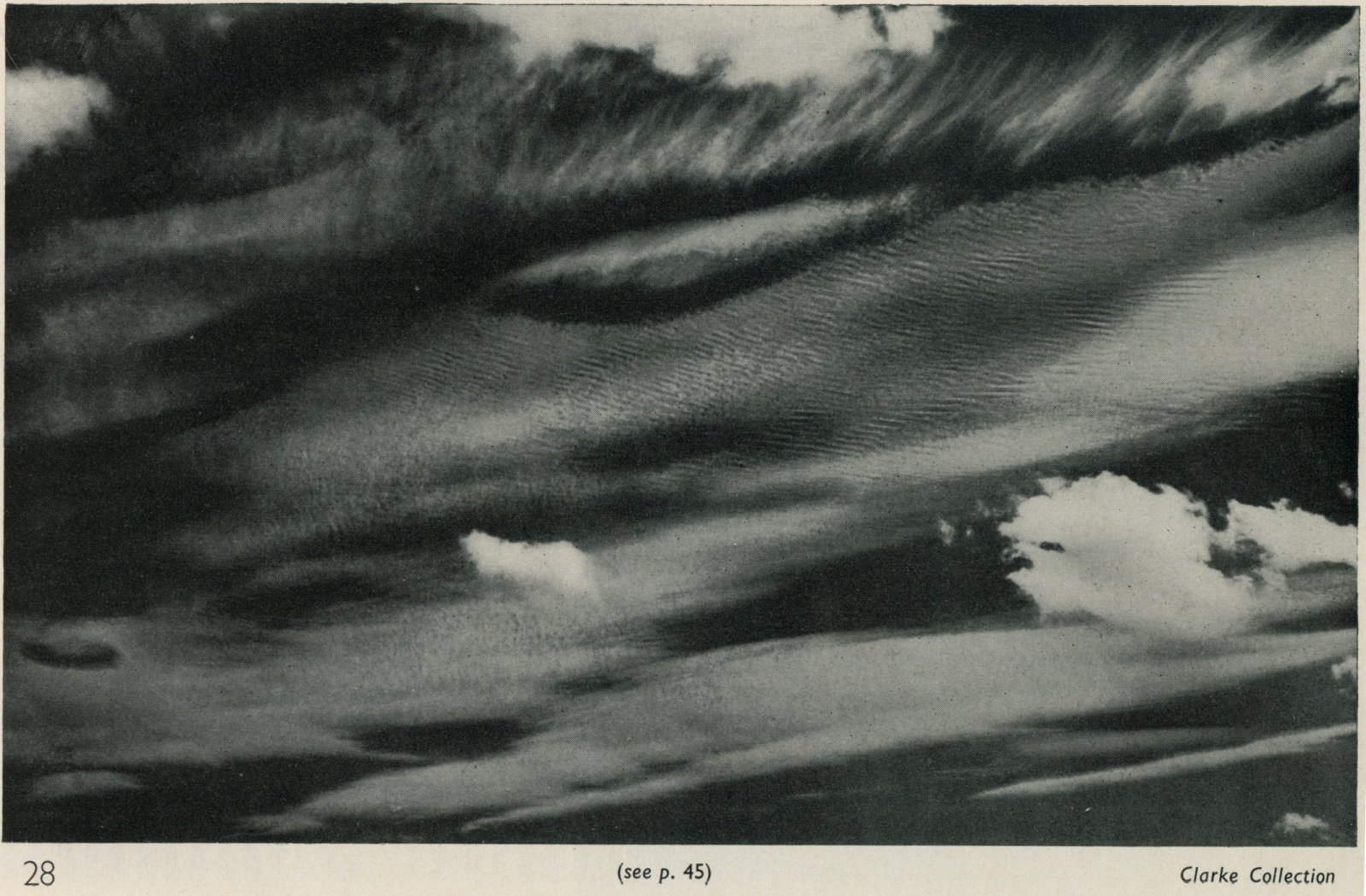 ... Along the upper edge of the picture the clouds become transformed completely into fibrous clouds of ice crystals, and in the upper center and lower left holes have appeared in the droplet cloud, where a similar transformation has occurred and the crystals have fallen to a lower level 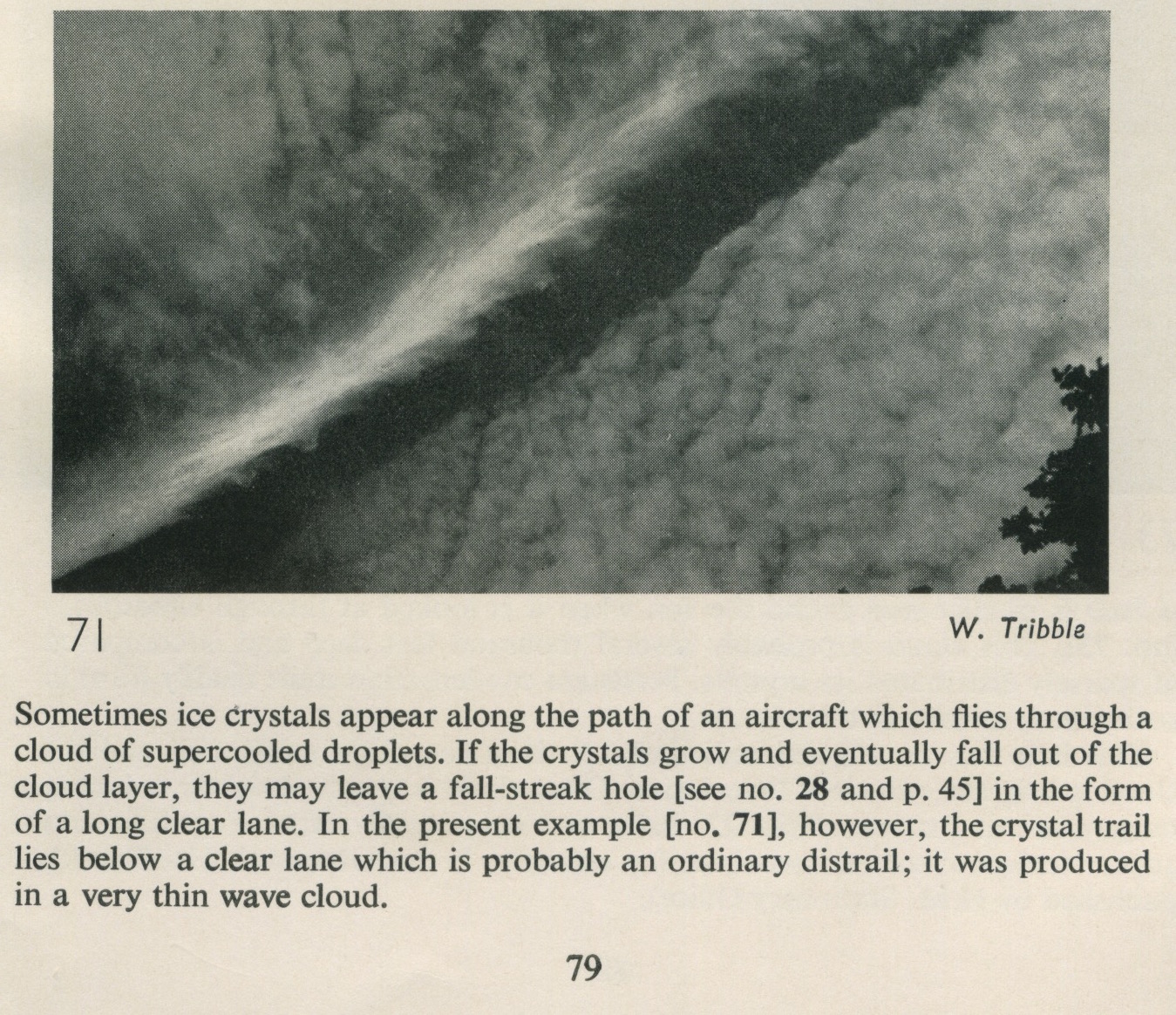 So 1957 is a far back as I can go with books in my collection. They must have occurred before, at least as far back as the 1920s or 1930s although they would have been far more rare. It's also possible they were observed before powered aviation, although I'm not aware of any reports.

A more comprehensive survey was carried out by Peter V. Hobbes in his 1985 article Hole in Clouds: A Case of Scientific Amensia/ 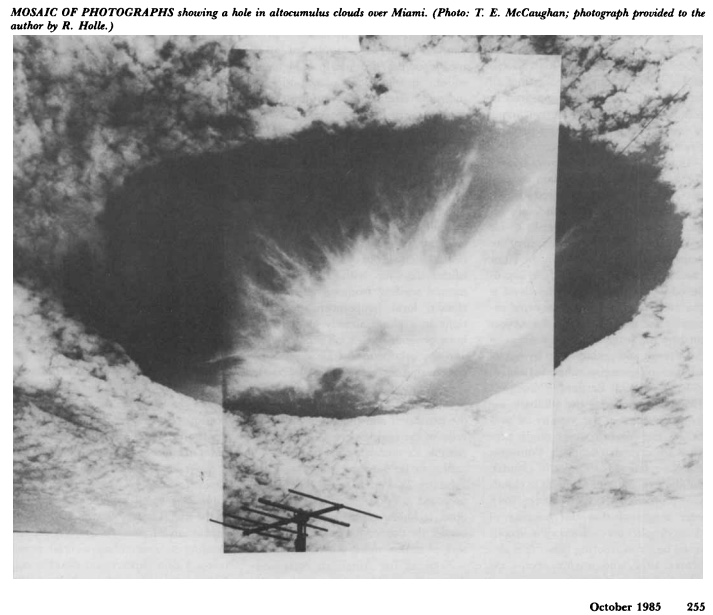 Photographs of holes in clouds can be found as early as 1926 (Cave, 1926). A German scientist, writing in 1940, added a description of the holes (Schumacher, 1940). Others began to write on the topic. The eminent British meteorologist David Brunt suggested in 1946 that the holes were produced by the descent of cold air from above. Two years later, Poulter (1948) showed photographs of a “long canal of blue sky in altocumulus clouds in the center of which was a long band of feathery cirrus.” Poulter attributed the “canal” to the exhaust heat from an aircraft, but he offered no explanation for the ice crystals. Photographs of similar holes in clouds, but without discussion, appeared in the British publications Weather (1952, 7:25; 1954, 9 : 9) and the Meteorological Magazine (1951, 81:9). In 1954, Stuart reported the presence of precipitation streamers known as virga falling from a distrail produced by an aircraft in high altocumulus clouds. Despite the fact that all but one of these reports appeared in popular English weather journals, none of the authors referred to any previous observations of the phenomenon.

I have the 1943 edition of Clouds, however I can't see what Hobbes might be referring to. However, some of the other Hobbes references are worth following up on. 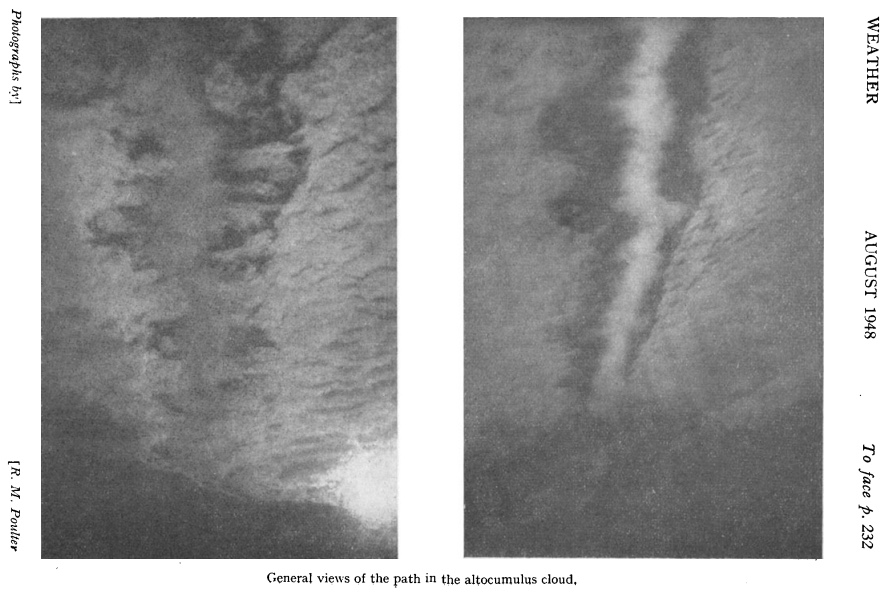 Staff member
Google Books has a snippet view of what appears to be the same Miami cloud holes, dating them to Dec 1 1967: https://books.google.co.uk/books?id...ud"&dq="Hole+in+cloud"&hl=en&sa=X&redir_esc=y

And that Spitfire visible near the bottom of the hole punch (or one like it anyway) certainly has the ceiling to have created it.

Fantastic and succinct explanation on the phenomenon. I feel like my cloud knowledge has "levelled-up". I'm also wondering if it's worth tracking down my high school geographic sciences teacher to show him this is how you explain clouds in a way that doesn't make your brain melt out of your ears.

The hole punch cloud is a very visible example of the Bergeron Process, by which most rain in temperate latitudes forms (initially as snow).

I'm not sure how much of the initiation of a hole punch cloud is due to pure agitation and how much is due to aircraft exhaust releasing freezing nuclei that allow heterogenous nucleation of ice crystals, which occurs at higher temperatures than pure water (spontaneous or homogenous nucleation). It's likely a mixture, but I'd suspect that the freezing nuclei play a larger role in most cases.

It has been suggested that the adsorption of sulfuric acid by soot particles also in the exhaust would create strong freezing nuclei (Jensen and Toon, 1994).
Last edited: Dec 27, 2016
You must log in or register to reply here.

M
Mountain shadow is sandwiched between the mountain and the Sun