Please don't repost long reply quotes. If you are using a phone that doesnt allow you to highlight only the text you wish to reply too (and then click the little reply pop up), please spend half a minute using the backspace button to delete unnecessary parts of the reply quote.

It takes up space and in many situations, confuses readers because they cant quickly see WHICH part of the quote you are actually replying too.

Loading trucks will be the bottle neck, and time will depend on how far they travel to unload. I think 30 minutes per truck would be optimistic and the more trucks you operate the more excavators you need.
In the photo below there appears to be a couple of access roads that lead to the damaged area but I doubt they will just end-dump the material back into the chasm. Seems like the material would just end up back in the river when they have to use the spillway again. A better option might be to haul it to the emergency spillway repair work.
In the bottom center of the picture it also looks like they are creating a road out onto the debris pile. Not clear what this might be used for. It will be interesting to see the work as it unfolds.

Soilmaker said:
Based on photos it's hard to believe that water levels dropped 23ft. How deep is that channel?
Click to expand...

I have not found anything to directly confirm this, in particular in the 1974 DWR record of the dam's construction, but one news report states that in places the channel is 70 - 80 feet deep: https://ww2.kqed.org/news/2017/02/07/engineers-assess-spillway-problem-at-oroville-dam/ That is broadly consistent with what you can glean from the few drawings in the record (basically the ones at pages 94 and 96 with text at page 100) that refer to the profile of the pool at the foot of the spillway. One thing that is clear is that it is not concrete-lined as suitable rock was thought to underlie that area.

The same news report states (attributing this information to Bill Croyle of DWR) that the channel through the debris pile that DWR is aiming to create would be 30 feet deep, 150 feet wide and 1500 feet long. That would involve the removal of a lot of material but not as certainly not as much as is in the whole debris pile.

What I did hear Croyle say in the course of the 27 Feb. press briefing was that there were three spoil sites in the immediate vicinity of the pool to which the rock would be removed. By the sound of it the spoil will be transported to these sites mainly by barge so this will not be an exercise in thousands of truck journeys. (Struck my last comment as it may be inaccurate in light of the oval road system now in place on the site. It leads directly to one of the three sites Croyle mentioned, which is on the riverbank of the hill below the emergency spillway.)
Last edited: Mar 1, 2017
S

Never underestimate the power of water.

According to Wikipedia, when the St Francis Dam collapsed in 1928, a chunk of concrete from the dam wall weighing about 10,000 tons was found three-quarters of a mile downstream. That dam was small compared to this one, and the water volume it impounded two orders of magnitude smaller than Lake Oroville.
Last edited: Mar 1, 2017 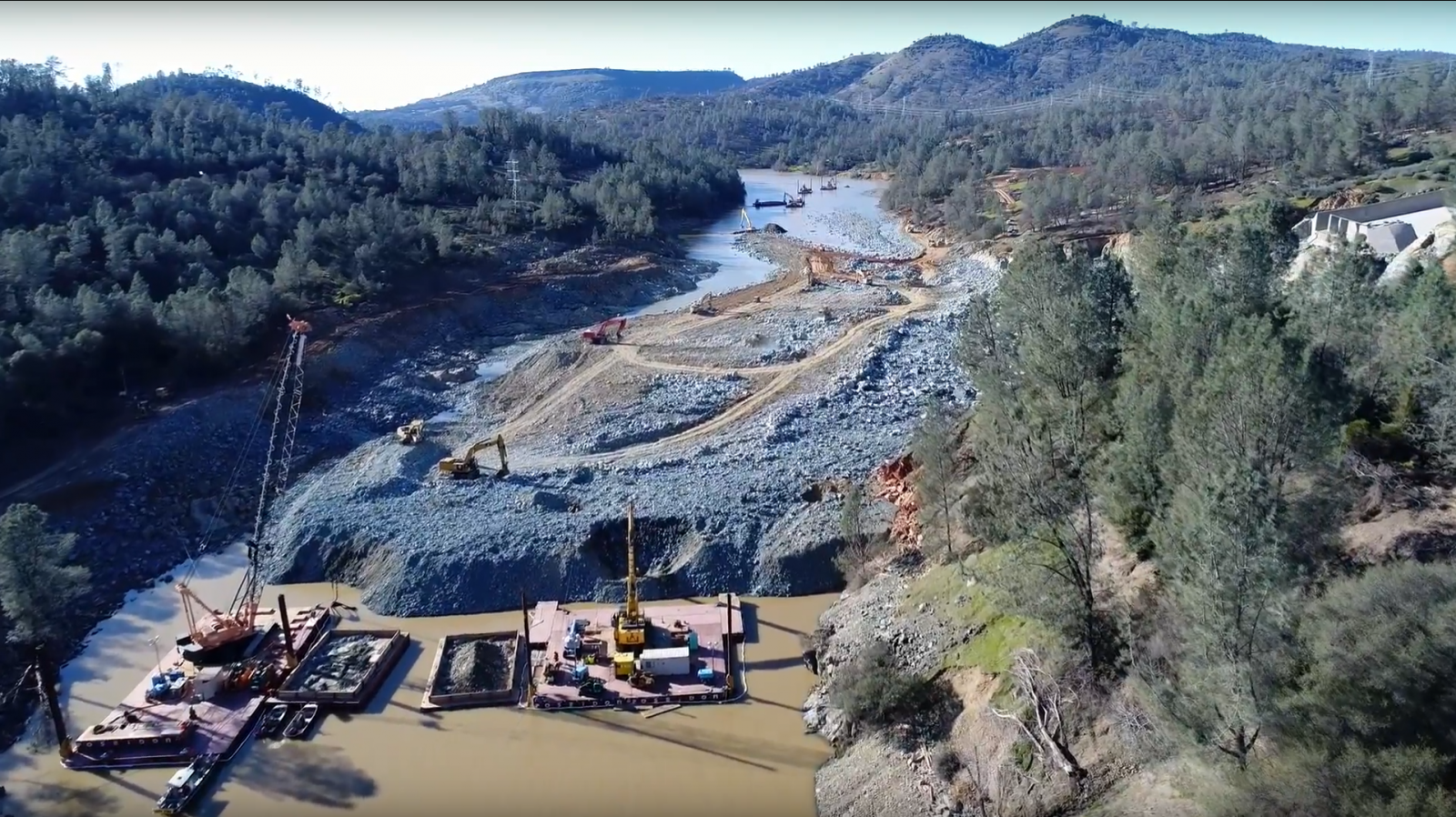 Bear in mind there is a small channel already there, so they should work on expanding that.

As I see it, the main problem they face, apart from logistics, is clearing the rubble in such a way their hard work isn't undone when they have to start dumping water again. When the water comes down, not only will it rearrange their dredging, but bring more debris down with it. Working on the existing channel will help minimize that, because that's what formed naturally.

They might want to do some dredging, then open up the spillway a bit to see what happens -- whether it's going to work or not.

I'm wondering if there is some way they could use the power of the spillway to their advantage, and do some of the hard work for them, but I don't see it. Everything is so darned big, they have very limited options, no matter what resources they throw at it.

This is now a battle against Mother Nature, and it was a natural consequence the spillway would fail at a time of year she would get to call the shots.
Last edited: Mar 1, 2017

The size of the spillway is easy to underestimate until I see some recognizable figures to use for scale. Now it's easy to see how far the river level actually dropped. 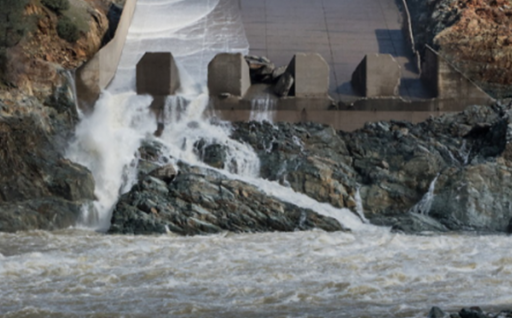 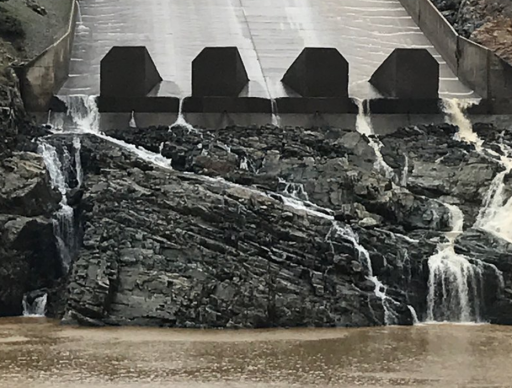 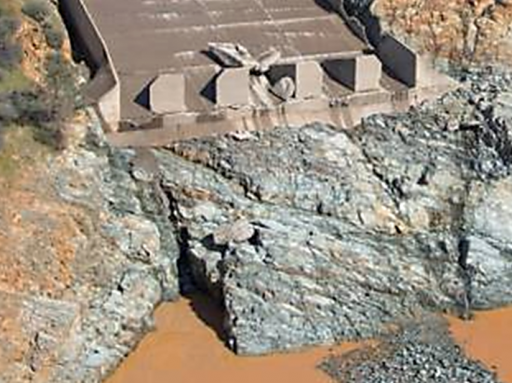 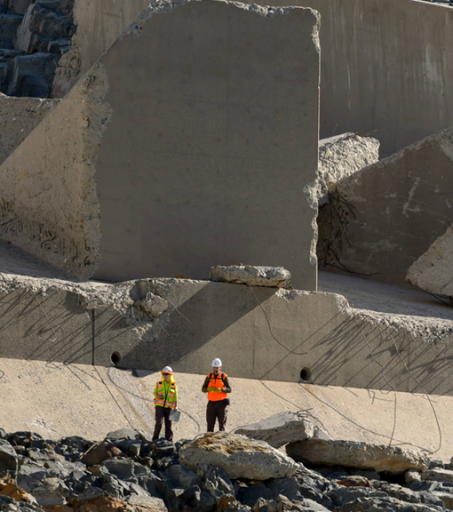 The Oroville coverage on Metabunk started because this was a significant current event with potential for significant misinformation. In particular people thought that the dam itself was failing.

Now there's no significant rain forecast for at least a couple of weeks, the amount of erosion is clearly revealed in the latest photos and video, and all we have left is a major civil engineering project. While that's certainly interesting, the focus of Metabunk is in combating misinformation, not chatting. Metabunk is also a strongly moderated forum, and extensive discussions on the minutia of the Oroville situation created excessive work for the moderators.

If there's some significant and focussed misinformation about the Oroville situation, then start a new thread. If you are really into minutia I would suggest continuing such discussion on forums that have a focus on the relevant topics, like geology. You can continue to follow the process via DWR.
https://pixel-ca-dwr.photoshelter.c...yfg/G00003YCcmDTx48Y/Oroville-Spillway-Damage 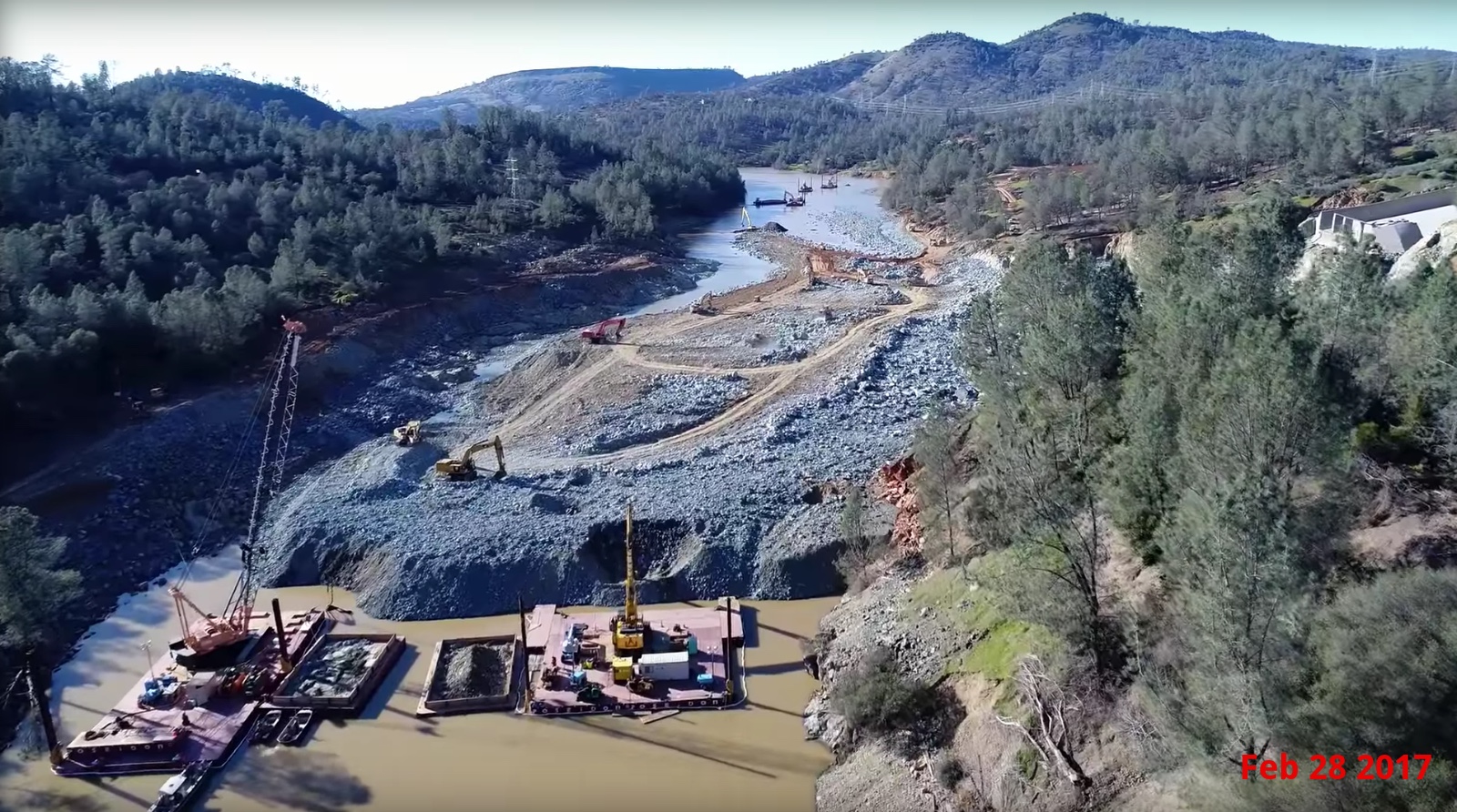 And if you want a more free-ranging discussion, try the subreddit.
https://www.reddit.com/r/orovillespillway/
Last edited: Mar 1, 2017

Staff member
The creation of an Oroville sub-forum does not mean this is an Oroville free-for-all. Posting Guidelines still apply.
https://www.metabunk.org/posting-guidelines.t2064/

Again, if you want a more free-ranging discussion, try this subreddit.
https://www.reddit.com/r/orovillespillway/

Staff member
I'm going to lock this thread until some more erosion occurs. It's drifted too far off topic.