Hi, I was interested in what the opinion is on 'earthquake clouds'?

Is there a definite correlation between the phenomenon and a result (earthquakes), or are they just unusual symmetrical weather systems which are noticed because of the way they look, and then connected with a later earthquake?
(BTW, does the word 'correlation' always imply a direct cause effect relationship, or just two things which can be grouped together but aren't neccessarily related?)

Do they appear at times when there is no corresponding earthquake?

They seem to be relatively well-documented,

and the majority of sites collecting and analysing them don't seem to be trying to make a connection to HAARP or earthquake inducing technology.

I can't really understand the following, but it seems to be an alternative but scientific theory to explain them. I don't have the head for detail needed to understand or follow it, can any one give me the idiot's version?


My own thoughts are that there actually may be a very real phenomenon related to earthquake stress somehow influencing the atmosphere, and it has been reported throughout history, long before HAARP. But I don't know if the linking of the two events is justified, or understand why earth-stress would result in 'sun dog' type phenomena, or symmetrical cloud forms.
I'd appreciate any thoughts, thanks.

Staff member
Those images just show normal clouds or halos. The clouds people call HAARP clouds are just normal wave/ripple clouds. I see them here, and we've not had an Earthquake for a while. They have always occurred.

However there IS some evidence that suggests earthquakes, and even pre-earthquake activity can cause changes in the ionosphere (but of course that's way above these clouds).

Consider that large earthquakes are felet over thousands of square miles, and there will always be a wide variation of clouds over that area.

regarding your last point, i guess unless they can prove the seismic centre as being the same geographic location as the observed clouds, or significantly related to it, there is little to connect the two except selecting coincidences. and telling a story about them. pretty natural to do.
is it just a meme that has survived as a myth, then spread wider because of the internet?
how wide is the epicentre of an earthquake anyway, the boundary between what is considered the earthquake, and it's effects?
obviously the EFFECTS are felt quite far away, but the actual earthquake itself?

Staff member
There are lots of old folk tales about things associated with earthquakes. Some might have an element of truth. But I'm 99% certain these are just normal clouds.

The circumhorizon arc, for example, occurs because of ice crystals aligning with the sun. It seems highly implausible that activity a mile underground could affect ice crystals (or any type of cloud) seven miles overhead.

Is there a site with correlations? YouTube videos are not particularly good evidence.

(taken from the second link in OP)
"An earthquake light is an unusual luminous aerial phenomenon that reportedly appears in the sky at or near areas of tectonic stress, seismic activity, or volcanic eruptions. Once commonly challenged, it was not until photographs were taken during the Matsushiro earthquake swarm in Nagano, Japan, from 1965 through 1967, that the seismology community acknowledged their occurrence."

the reference note linked to this page

but i couldn't find the info on earthquake lights anywhere.

another quote from that site...

this website doesn't seem to include the ripple cloud systems that other sites are labelling earthquake clouds, only the iridescent ones.

"One explanation involves intense electric fields created piezoelectrically by tectonic movements of rocks containing quartz.[8]Another possible explanation is local disruption of the Earth's magnetic field and/or ionosphere in the region of tectonic stress, resulting in the observed glow effects either from ionospheric radiative recombination at lower altitudes and greater atmospheric pressure or as aurora. However, the effect is clearly not pronounced or notably observed at all earthquake events and is yet to be directly experimentally verified.[9]
There is also debate in the scientific community regarding radon as a possible precursor to some earthquakes,[10] so another theory is that glowing clouds might be light emission produced by ionization or plasma-chemical reactions[11]"
so perhaps there is a genuine effect happening, but the label is also applied to other striking but coincidental clouds mistakenly.

(and that third link i posted, whilst having nice cloud photography, seems a little less than scientific in its explanations....

"Although it seems that nothing exists in the sky, they say that the sky is filled with elements called Niu that are smaller than atoms. Niu, which we can never see, is said to be looking at the earth with special sentiments. Stars are also not simple masses of rocks or gasses, but groups of Nius with awareness."

(oh and sorry, could not find any better info on reference to correlations other than the second quote.)

hmm, reading another referenced link from the second link in OP...

(and apologies for font variations from quoting text from other sites, i tried to fix it)


interesting, but is this the same as the iridescent clouds?
they do look like the examples of circumhorizon arc's you posted, and if they're not associated with earthquakes, then why would these other ones be?
could the vapour-cloud being talked about above produce some kind of ice crystal orientation in the clouds? would clouds made from distilled water have any special properties? (if steam is distilled water).

Staff member
This seems to be [FONT=arial, sans-serif]Zhonghao Shou's personal theory. It's interesting, and I'd give it a little more weight were it not for the ridiculous interpretation of normal clouds he puts in this paper:[/FONT]

Fig 4.3 for example is clearly a contrail.

well spotted. your eye for details i would skip over is a great resource.

yeah quite possibly. just to give a better reference, here is a good example of the clouds being associated with earthquakes... 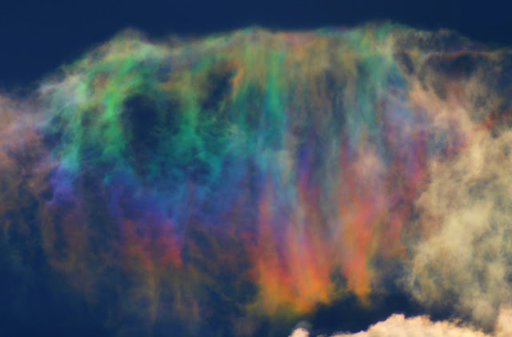 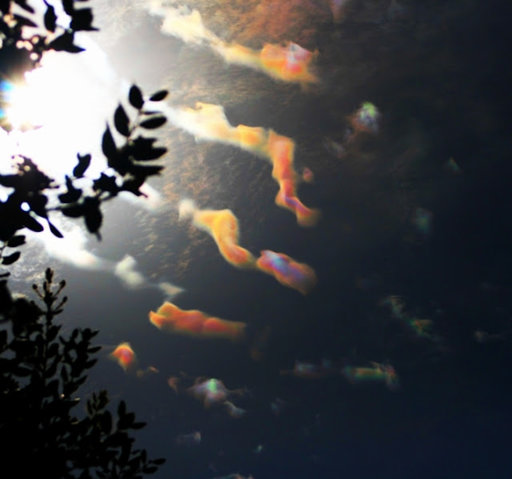 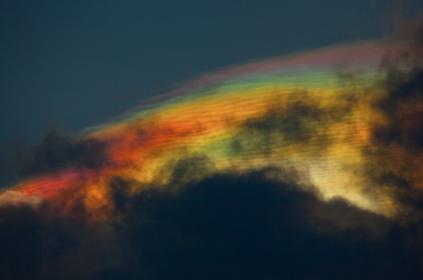 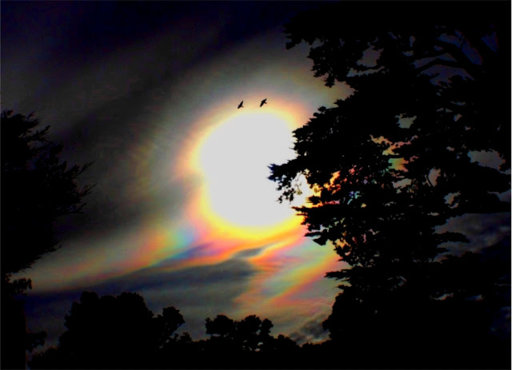 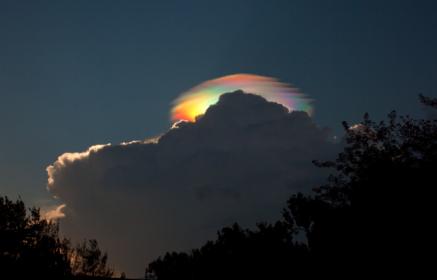 which gives the explanation :

Showcasing cool pictures of cloud iridescence or commonly known as 'Earthquake lights'. They are produced from magnetic field fluctuations affecting ions in the atmosphere (much like auroras or “northern lights”) from stresses on crystals such as quartz in the base-rock. They occur in times of tectonic stress, earthquakes for example, hence the name.
Click to expand...

BUT, one of the pictures linked to a nasa site which gave the following explanation :

An Iridescent Cloud Over Colorado Credit & Copyright: August AllenExplanation: Why would a cloud appear to be different colors? A relatively rare phenomenon known as iridescent clouds can show unusual colors vividly or a whole spectrum of colors simultaneously. These clouds are formed of small water droplets of nearly uniform size. When theSun is in the right position and mostly hidden by thick clouds, these thinner clouds significantly diffract sunlight in a nearly coherent manner, with different colors being deflected by different amounts. Therefore, different colors will come to the observer from slightly different directions. Many clouds start with uniform regions that could show iridescence but quickly become too thick, too mixed, or too far from the Sun to exhibit striking colors. This iridescent cloud was photographed above Boulder, Colorado last week.
Click to expand...

which seems to be very different.

so it could all just be down to perpetual repetition of an association with a rare and little commonly-understood cloud phenomenon, with another relatively rare phenomenon (experiencing a destructive earthquake). the mind is bound to look for correlations after such a significant event.
or it may genuinely be a yet-to-be scientifically accepted real phenomenon that the official explanation just hasn't caught up with yet.
there's room for psuedo-science, or at least well-intentioned but mistaken science too.

Staff member
Yes. The iridescence is explained by the optical properties of small drops of water. The magnetic field affecting ions makes no sense. And if earthquakes perturbed the magnetic field, then that would be measurable.

The top three pictures are probably close crops of circumhorizon arcs (from ice crystals), not iridescence.
You must log in or register to reply here.