Professor Simon Holland is a YouTuber (and presumably at some point was also a professor) who makes videos related to fringe topics explored from a seemingly scientific angle.

In a video on the subject of what interviewee Paul Devereux calls "earth lights" Holland makes the claim that:


Earthquake lights, due to their fleeting nature, have been hard for the scientific community to research, record or explain. Few photographs exist - even today with camera phones there are only a few blurry snaps and some CCTV footage.

But all that changed on the 13th of March 2011 when the Sakurajima volcano erupted in Japan. Scientists studying the volcano had set up a remote camera to record any possible volcanic activity. What they recorded stunned them.

For the first time the earthlight phenomenon was recorded in real time. What this footage triggered was possibly a whole new scientific model of how these lights could be produced.

The Sakurajima volcano holds a clue that possibly reveals what is going on deep underground. When this footage was analysed a strange and previously unobserved phenomenon was clearly seen: the earth light emissions grow in strength shortly after a volcanic plume is released.

For the first time we can see how immense pulsating pressure produces light.

Claims of earthquake lights (EQLs) are something we've looked at before, and there's a decent discussion here about their history and the debate around their existence:

As for this specific claim, I believe there's a pretty straightforward explanation.

From these videos we learn that:
Following links to the video database we find some very helpful information in the FAQ regarding the camera:

A1: It's not a UFO. This live camera uses a high-sensitivity camera, so even in very low light it will appear bright (notice the stars being recorded; it's very sensitive). If it's in the sky, it's an airplane or a satellite, and if it's on the ground, it's a construction vehicle, a construction site light, or another camera's night light. In the case of the sea, it's a fishing boat. If a UFO is shown, we will make a big announcement!

There are also videos from neighbouring days which show the exact same light in the exact same place over more or less the same hours of day, including ones on the 11th (the light being there from 7pm to just before 10.30) that illustrate the highly light-sensitive nature of the camera when other cars pass on the nearby road: 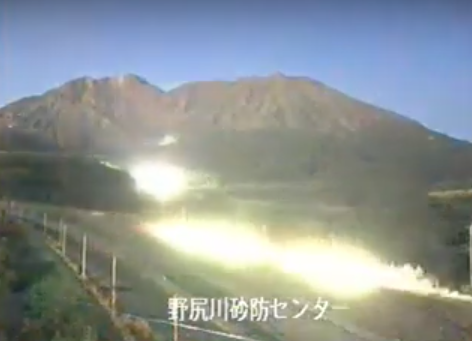 and by the lighting and the appearance of the sky, shown some five hours after sunset (11.22pm) on a night with less than half a moon: 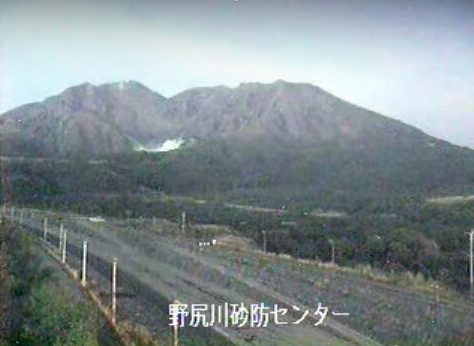 as well as even more convincing footage of the light "driving away":

The light is also seen for almost three hours on the 12th, between 6.43 and 9.37pm - ie, the hours when it would be needed to see to do work and the hours it would show up most brightly on the camera:

If I had to hazard a guess I would say it was something to do with a short-term construction project somewhere on the western side of the volcano that took place on those three days (the light isn't there on the 10th or the 14th, nor on the several other dates from that month that I checked).

As for the claim that "the scientists who set up the camera were stunned by what they saw" this appears to be made up (not necessarily by Holland; he may simply be repeating what someone else said) and if there's any truth in the claim that "the footage triggered a possibly whole new scientific model of how these lights could be produced" it doesn't seem to be a triggering that took place among mainstream scientists, given that they don't seem to have noticed this incident (possibly Holland was merely referring to Devereux).

Earthquake lights may still be a thing. But this video isn't evidence of it.
Last edited: Oct 11, 2022

Rory said:
Professor Simon Holland is a YouTuber (and presumably at some point was also a professor) who makes videos related to fringe topics explored from a seemingly scientific angle.
Click to expand...

Probably like quite a few people who have seen at least a few of this fella's videos I'd assumed he actually was a professor and something of a scientist. But having had a few comment exchanges my curiosity became piqued by his use of language, his conspicuously non-scientific attitude, and a liberal employment of the ubiquitous MRFEs (multiple random floating ellipses). And checking into his background I notice he's actually just a video editor who has worked for some decent companies on some decent programs.


"My background is in TV. I have worked for, Discovery Ch, Nat Geo, PBS, making science and history films."

But checking his credits, rather than the grandiose claim of "making films" for the above channels (as well as the BBC) his career has been almost exclusively in editing and assistant editing, aside from apparently producing a short video for the University of Hawaii and being an assistant producer on one episode of 1978 'yoof magazine show' Something Else.

As for being a professor, he writes that he is:

I don't see any mention of this on his LinkedIn profile, however, unless it's this:

So unless there's more information that is posted elsewhere he appears to be very much overstating his credentials, as well as his claim to professorship.
Last edited: Oct 14, 2022

also that he lives in a French watermill.

A French "professeur" means this:

Professor may refer to:
• Professor (title), a title qualifying certain teacher-researchers recognized by the academic community for their work and their teaching;
• Professor (teacher), a profession consisting in teaching various notions to a group of learners.

Indeed. Though I don't see how his moving to France affects anything; and even high school teachers are called "profe" in Mexico. But that's not the case in the UK (not to mention the implications of calling oneself a professor in the field of science).

Which gives me an idea: I used to teach high school in Mexico and have also lived in France. So please all call me "Professor Rory" from now on.
Last edited: Oct 14, 2022

According to Professor Holland you're now a believer. 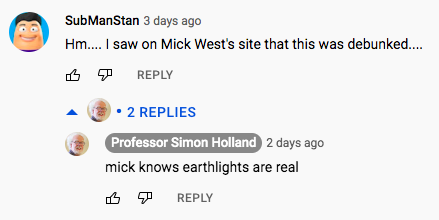 Rory said:
According to Professor Holland you're now a believer.

P.S. I believe the 2017 Mexico thread is our best discussion of these so far. https://www.metabunk.org/threads/ex...-line-arcing-and-transformer-explosions.9044/
Last edited: Oct 17, 2022

Rory said:
So please all call me "Professor Rory" from now on.
Click to expand...

Rory said:
Though I don't see how his moving to France affects anything; and even high school teachers are called "profe" in Mexico
Click to expand...

Yes, but if this guy is peddling videos to a predominately English speaking American/UK/Commonwealth audience, the title "professor" has certain connotations. In most cases, it's someone that teaches collage level courses and has some sort of post Bachelorette degree. My son and his wife do a lot of teaching at two different UCs, but they have not finished their Graduate degrees yet, so they are known as GSIs (Grad Student Instructors) NOT professors.

It could be used loosely, I suppose, if someone is teaching a practical subject at collage that doesn't have a corresponding advanced degree. Our local Junior College has a highly regarded welding program. So, a student could attend a math class, as part of their welding degree, that's taught by a "Professor" with a Masters or PhD in mathematics, but then go to a welding class where the "Professor" does not have an advanced degree, just years of practical knowledge. But even then, people like welding teachers are usually referred to as "Instructors".

Maybe Proff. Holland taught a bit of video editing at some point in the past, but it sounds more like he just made up an authoritative sounding name.

Mendel said:
I believe the 2017 Mexico thread is our best discussion of these so far. https://www.metabunk.org/threads/ex...-line-arcing-and-transformer-explosions.9044/
Click to expand...

In 2016, science podcaster Brian Dunning said he was skeptical that the phenomenon even existed, citing a lack of direct evidence. There is also a "staggering volume of literature... hardly any of these papers agree on anything... I'm forced to wonder how many of these eager researchers are familiar with Hyman's Categorical Imperative: 'Do not try to explain something until you are sure there is something to be explained'

(Bolding mine)
https://en.wikipedia.org/wiki/Earth... can be accounted for by mundane explanations.

"Earthquake lights", it seems to me, are not a single thing with a single explanation, but a collection of phenomena that range from the mundane and misinterpreted to the "Maybe caused by X but we're not sure". I think we as a group are suited to discover the mundane and misinterpreted, and this instance falls squarely in that category.
You must log in or register to reply here.