Debunked: "There are many ways to make the death rate increase." - Robert McNamara

Staff member
Most large scale conspiracy theories share a belief that the world elite are planning some kind of massive and rapid depopulation. A common technique amongst those who seek to promote this fear is to take quotes entirely out of context, and make them seem the opposite of what the speaker actually meant.


"There are many ways to make the death rate increase." -Robert McNamara, New Solidarity, March 30, 1981

And yes, McNamara did actually say this. But no, it does not mean that he thinks making the death rate increase would be a good idea, or something to strive for. In fact the full context of his statement reveals that he's actually arguing that if we don't reduce the birth rate, then we will end up with an excessively 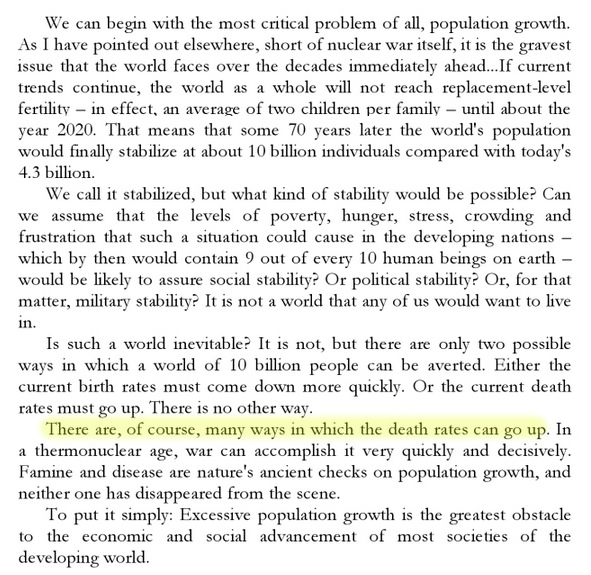 Considering he thinks that nuclear war is a worse problem than excessive population, he can hardly be suggesting nuclear war is a good idea. No, what he's saying is needed is a reduction in the birth rate, so we can avoid the alternative.

The quote seems to be an excerpt from a speech he gave many time. This longer article also makes his position very clear.
http://news.google.com/newspapers?n...FYvAAAAIBAJ&sjid=7NoFAAAAIBAJ&pg=1313,2439612

May 25, 2021
lougiants
L
U
The UAP Policy and Discursive Shift - Changing narratives on UAPs and its effect on policy.

Debunked: Steven Crowder: The AIDS epidemic was a hoax

Debunked: Rise In Respiratory Mortality from 4th to 3rd Cause of Death. "Chemtrail Flu"