quite awe-inspiring if you accepted it as true

anyway a young enterprising Kenyan was proving it (for a small consideration, business is business after all)

in essence he showed, as the bucket drained the matchstick rotated (on the surface of the rotating water) one way then the other depending on whether he had walked (10mtrs) either side of the line

was this a clever trick?, or would the physics of rotation show up over such small variation in position

but is/was it bunk?

Watch the guy working the ruse carefully. First he goes through a show of finding north, and locating the position of the Equator. This is all simply for show. As you’ll see in a second, this exact trick will work anywhere, not just on the Equator. I could do it in Boulder, at a latitude of 40° north!

He goes first to a basin on the Equator. It’s already filled, and the video jumped right before that, so I don’t know if he filled it right before draining it, or if it was sitting there for a while already filled. My guess is it had the water sitting for awhile — you’ll see why in a second. When he pulls out the plug the water drains straight down. OK.

He then grabs the basin and bucket and moves a few meters south. Watch very carefully what happens then: he pours the water from a bucket, making sure the water is flowing in to the left of the drain hole

Position isn't the deciding factor, though it makes it even more unlikely. Time is. The Coriolis Force only shows up over extended periods of time. Under about three hours it is fairly negligible. The direction of drain vortices is determined by initial rotation instead of Coriolis forces.

It's a good trick, but it's probably sleight of hand, imparting opposite rotations to the water while moving or pouring it.

It's fake, but it can be done for real, with great difficulties. See this pair of experiments done in the US and Australia:
http://www.smartereveryday.com/toiletswirl

ahah, excellent, thanks everyone

although I would like to think the line in the road was the actual equator and not, well

Staff member
The same trick are done for tourists in Equador, where they also balance an egg on a nail, and pretend you can only do it on the equator.
https://www.google.com/search?q=ecuador+equator+trick&num=50&es_sm=119&source=lnms&tbm=isch 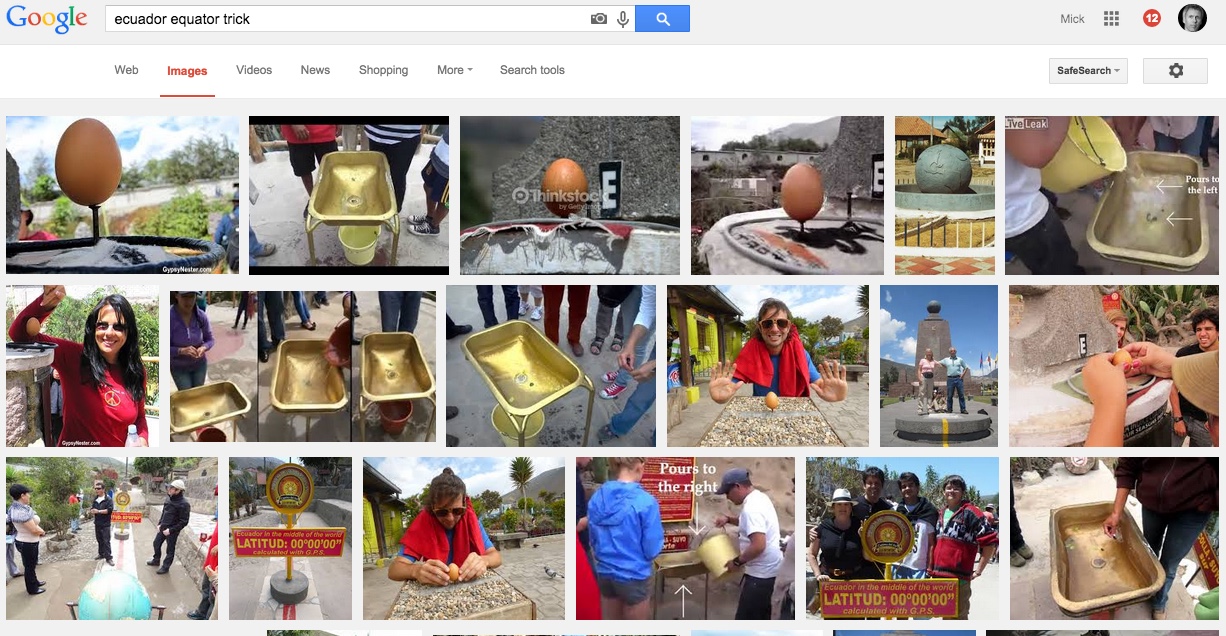 Unfortunately the line they do these tricks on is old, and not quite on the exact equator: 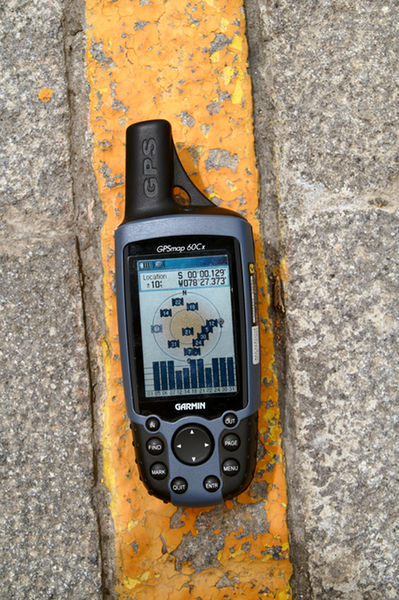 Mick West said:
Unfortunately the line they do these tricks on is old, and not quite on the exact equator:

"The exact equator" is not as easy as that. It's more a matter of definition. GPS receivers give the co-ordinates based on an mathematical model of the Earth, which is only an approximation. And there are several possible "geodetic datums" that you can use, all of which will have the zero-degree line in a slightly different place. 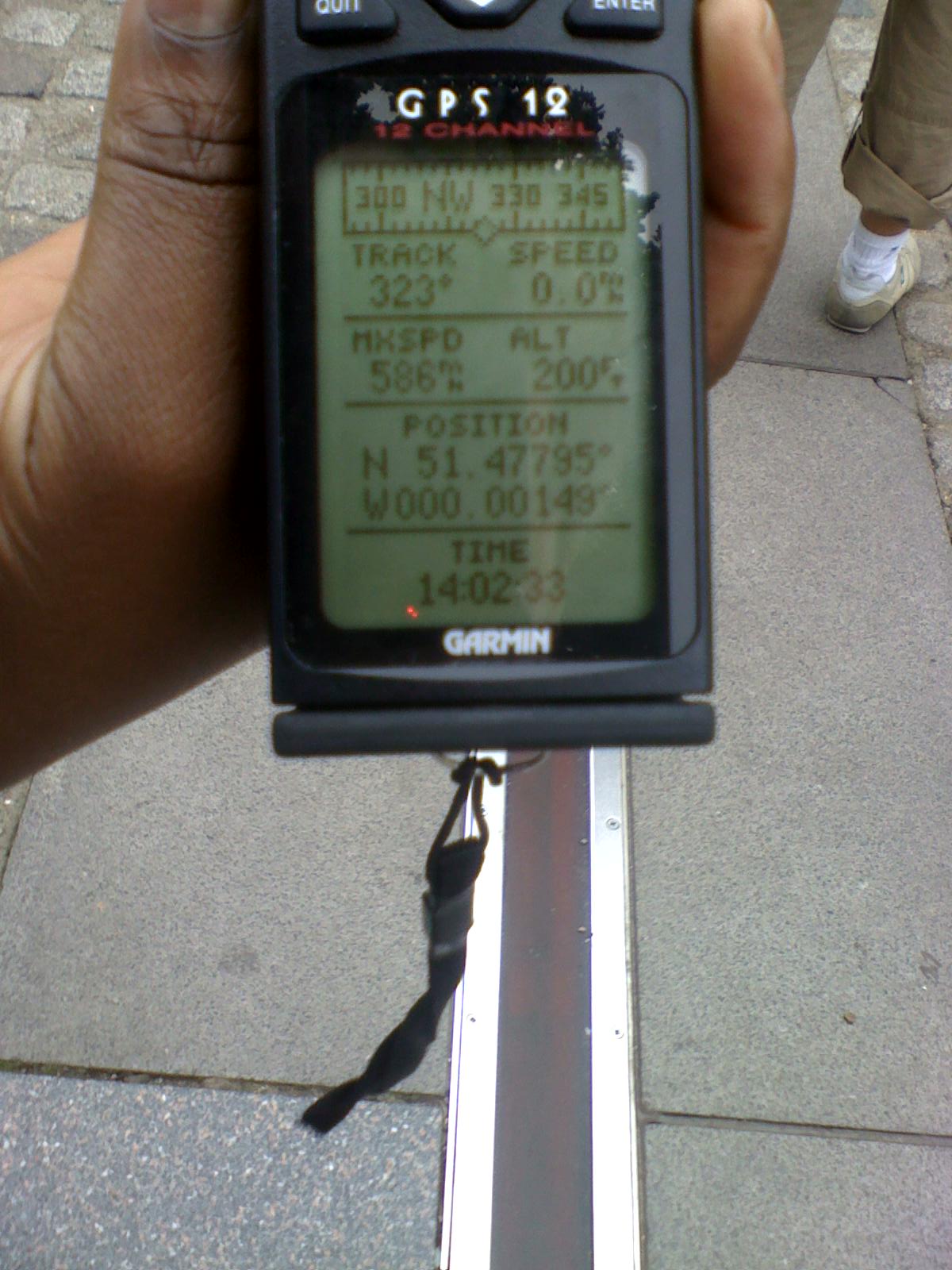 And then there is the fact that the equator is not fixed. The earth's axis of rotation wobbles slightly, which means that the equator also moves by a few metres over the course of a year. So, it's clear that just moving a metre or two either side of the line would not show an effect, because depending on when you carried out the experiment, the equator might not be on the line any more!

(When I visited Kenya, I was told by those in the know that the effect was created by the person turning in the appropriate direction while holding the basin of water before putting it down, to impart a rotation in the water.)
Last edited: Jul 14, 2015

so is the often repeated tale of water draining from a bathtub in the southern hemisphere, in say in Cape Town, rotating in a the opposite direction bathtub in the UK

Staff member
I was discussing this on Facebook with someone, he remained unconvinced, so I made a video to demonstrate.
Source: https://www.youtube.com/watch?v=HR8R9JNgtz0


Here here's using three different bowls. I suspect the shape of the bowl will have something to do with it.

The last video is extra funny when you realize that he has mixed up the directions in which the water is supposed to swirl due to the Coriolis effect.

skephu said:
It's fake, but it can be done for real, with great difficulties. See this pair of experiments done in the US and Australia:
http://www.smartereveryday.com/toiletswirl
Click to expand...

Those were some fun videos, but I don't think they proved it: because they only ran each test three times, there's still a probability that they obtained the 'correct' results by chance.
Last edited: Apr 24, 2018
You must log in or register to reply here.

Lake Balaton Laser experiment to determine the curvature of the Earth, if any.
24 25 26