Update: The plane in the video claiming low altitude contrails was misidentified, and was actually flying at 39,000 feet, see discussion in thread below. 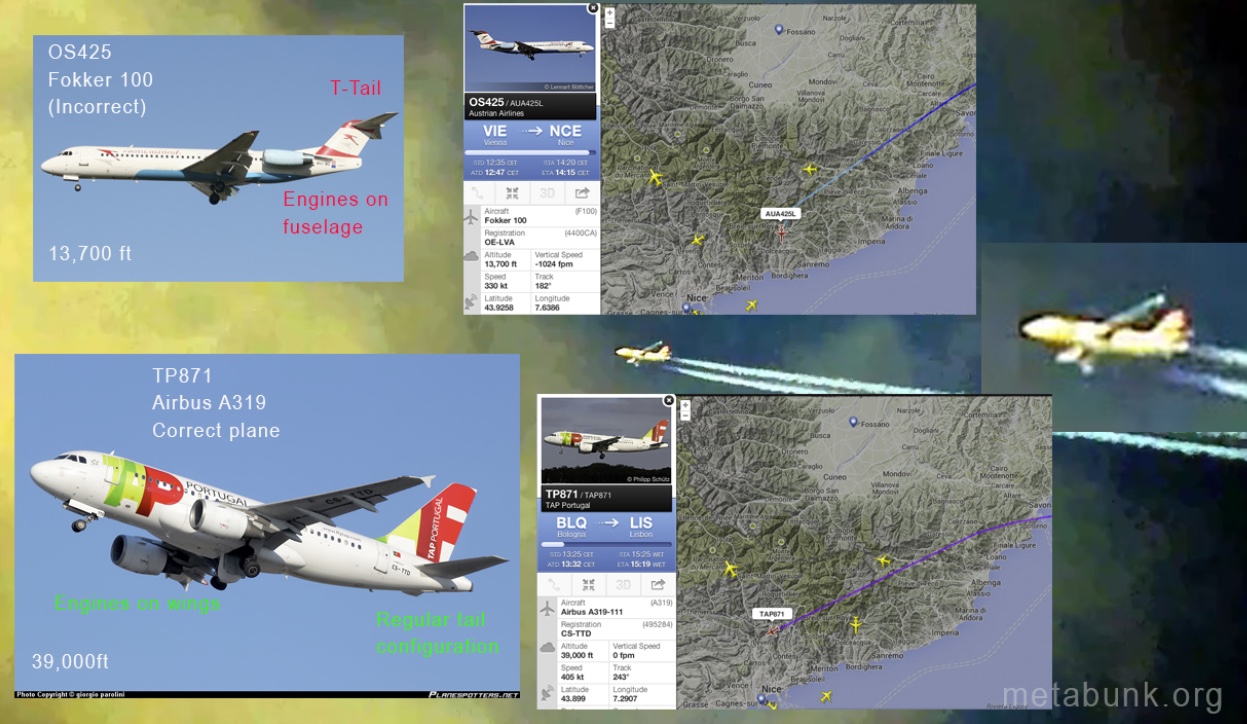 The latest video by Rosario M. "The Antitanker", involves a FlightRadar24 reading which seems incompatible with a contrail seen from the plane:


Honestly it is difficult from the video to understand the connection btw the plane releasing the contrail (as seen from Liguria, Italy) and the FlightRadar24 reading, an Austrian Airlines Fokker 100 at 4000m going to Nice.

The aircraft has been misidentified.
a Fokker 100 has engines on the fuselage and a T Tail. at about 23seconds intot he video when he zooms in, you can clearly see it does not have a t Tail and the engines are on the wings. so it is probably a 767 or A320 family of plane.
As the plane is going from right to left on the screen, I think he is just assuming it is the plane nearest to him on flight radar 24. I suspect it is the plane further to the left on the FR24 screen at 18 seconds into the video. Perhaps someone who is good at FR24 can check this.

Thanks Efftup, very useful observation, I still do not have enough expertise on airplanes like you guys

cmnit said:
Thanks Efftup, very useful observation, I still do not have enough expertise on airplanes like you guys
Click to expand...

There are several of us here with aviation expertise. Please feel free to call upon us at any time.

cmnit said:
The latest video by Rosario M. "The Antitanker", involves a FlightRadar24 reading which seems incompatible with a contrail seen from the plane:


Honestly it is difficult from the video to understand the connection btw the plane releasing the contrail (as seen from Liguria, Italy) and the FlightRadar24 reading, an Austrian Airlines Fokker 100 at 4000m going to Nice.

I've matched his live FR24 from the video:

and checked the plane that has flown further away in approximately the same direction: 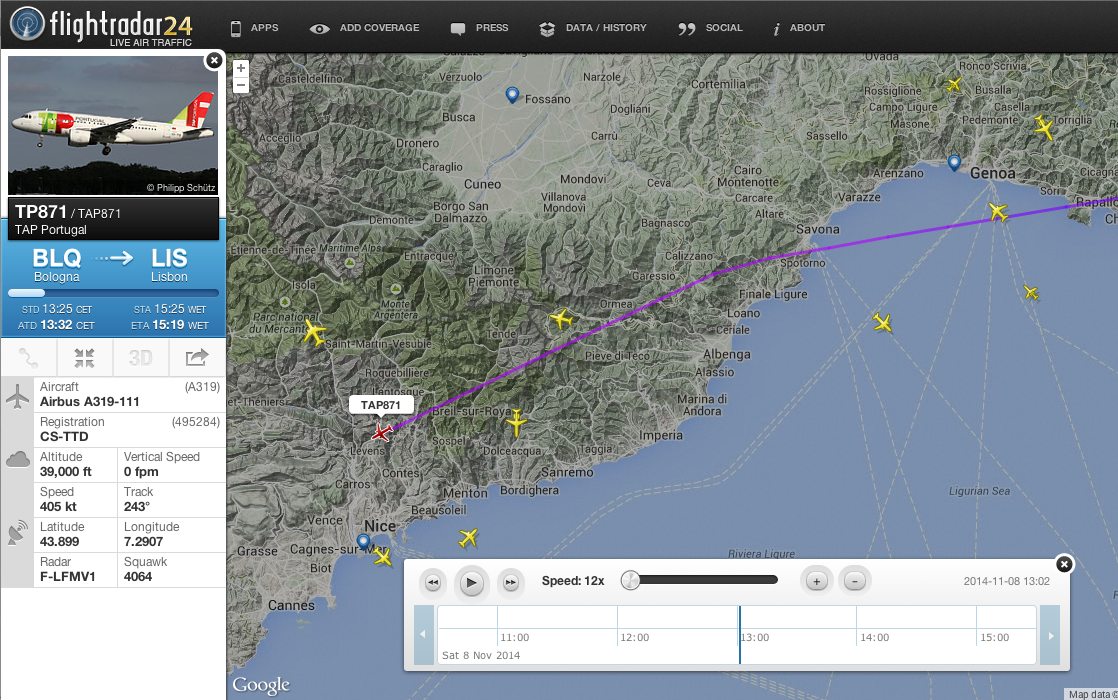 This Portuguese Airbus A319 (TAP871, registration number SC-TTD) has flown at 39,000 ft. It appears to have similar proportions and livery to the plane in the video (note the tailfin colours) 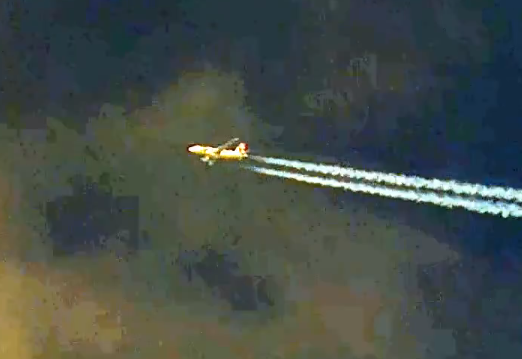 PS The video almost certainly has been taken today. In the previous days, the Austrian airline flights were made by the planes with different registration numbers flying notably different paths.
Last edited: Nov 8, 2014

Staff member
Added an explanatory graphic to the OP

You are all great, thanks!

It is true to say that for MOST of this planet, there will never be any contrails at 13,000 feet.

Possibly, in a few very rare occasions in extremely cold (and humid) conditions where a jet airplane is flying? Such as near the poles, at that low altitude....(AND, since there is no place to land for such aircraft in the Arctic, this defaults to the Antarctic)...still...

EDIT:: Because a jet will normally NOT be at "13,000" feet as a cruising altitude. It is climbing or descending THROUGH that altitude.....MIGHT be "stopped" at such an altitude, due to ATC reasons (ATC = 'Air Traffic Control'). There is MUCH to learn, and thus know about how modern civil aviation actually works.

Oh that's easy to explain, let me tell you something about pylon drains.

Apparently, Rosario Marcianò (Tankerenemy) is aware of the debunking his latest video, but dismissed it on his FB page. He also has added the following comment to the video: 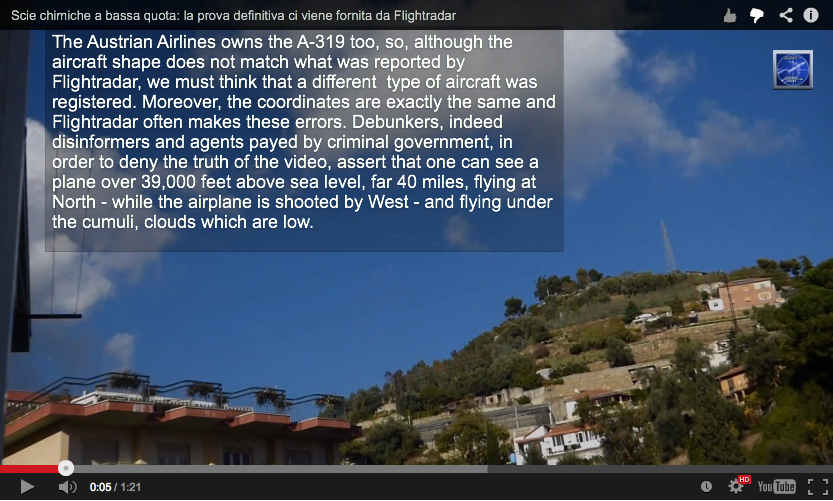 In this comment he "brushes off" both criticisms: 1) the wrong shape of the plane is because Austrian Airlines changed the plane to A319; 2) the alternative plane at 39,000 ft was to the North of him, whilst the video was shot in the West direction.

I would not be bothered with discussion of the absurdity of his first rebuttal, but can show that his second rebuttal is a lie. In the above shot, the camera faces North. It can be deduced from the balcony shadows in the bottom left corner and the time of video (about 13:00 UTC). Or it can be proven beyond doubts by finding the camera location and direction with the help of Google Earth and StreetView.

And, yes, the correct identification of the plane as TAP871 has been of great help too. Displaying on Google Earth its flight path, downloaded from FlightAware, and highlighting the plane locations around 13:00 UTC, allowed to narrow down the area and direction of search. To cut the story short, here is Google StreetView of the location: 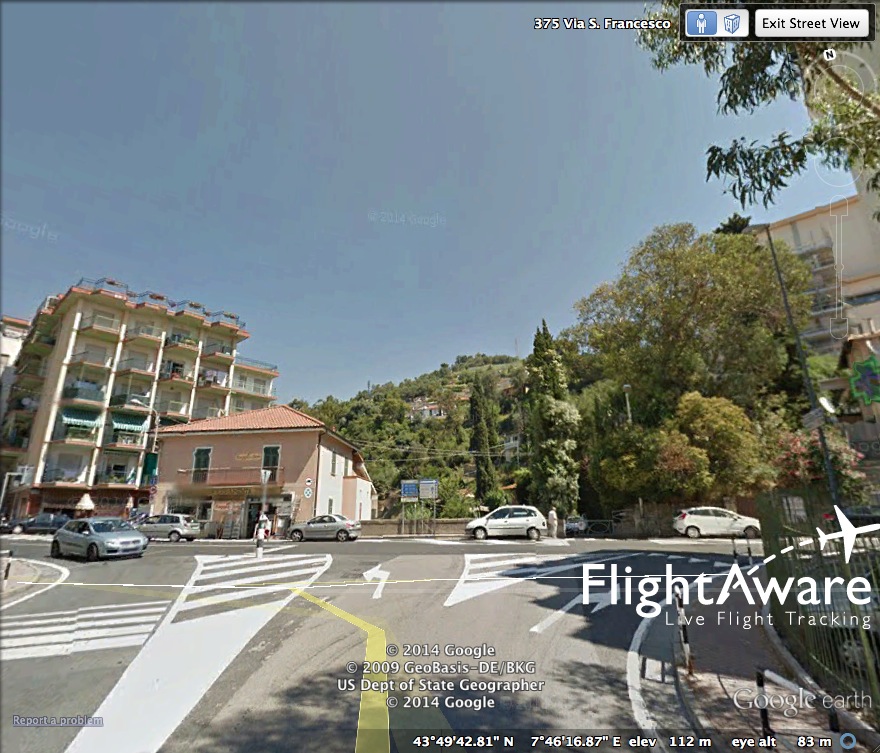 and zoom on the hill in the background: 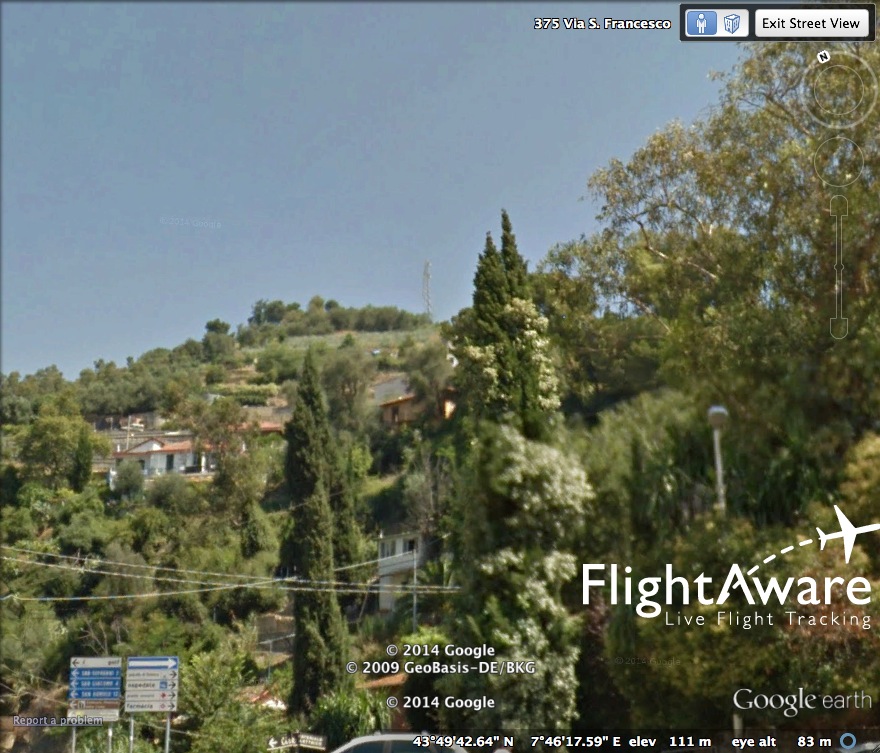 Compass in the upper right corner shows that the camera indeed points North, like the video. At the beginning of the video, the plane was only about 27 km (16 miles) away from the camera in that direction.
Last edited: Nov 9, 2014 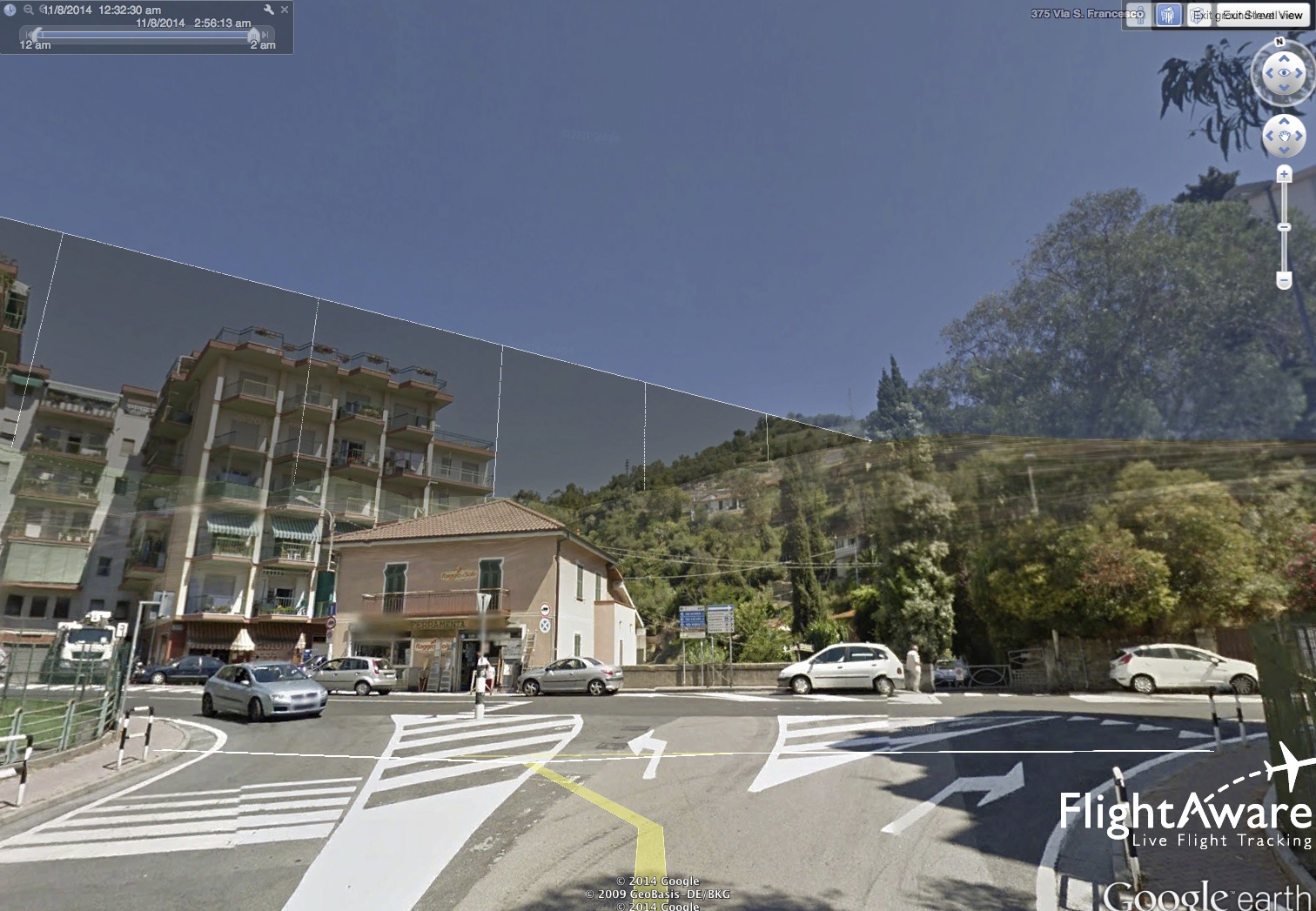 Flightaware does not seem to have the tracks for that flight, so I can't get it into Google Earth.

Staff member
Regarding the claim that the plane is below the clouds. 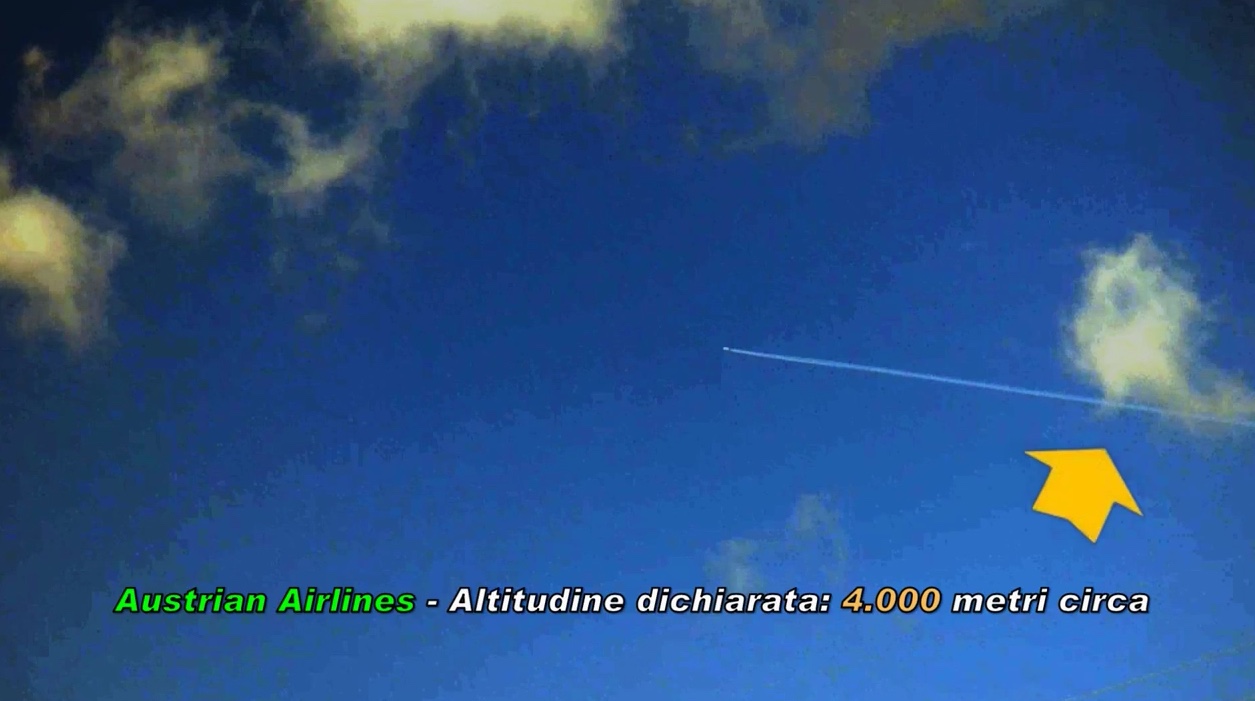 It's not, it's an optical illusion. You can just see the bright contrail though the thin cloud: 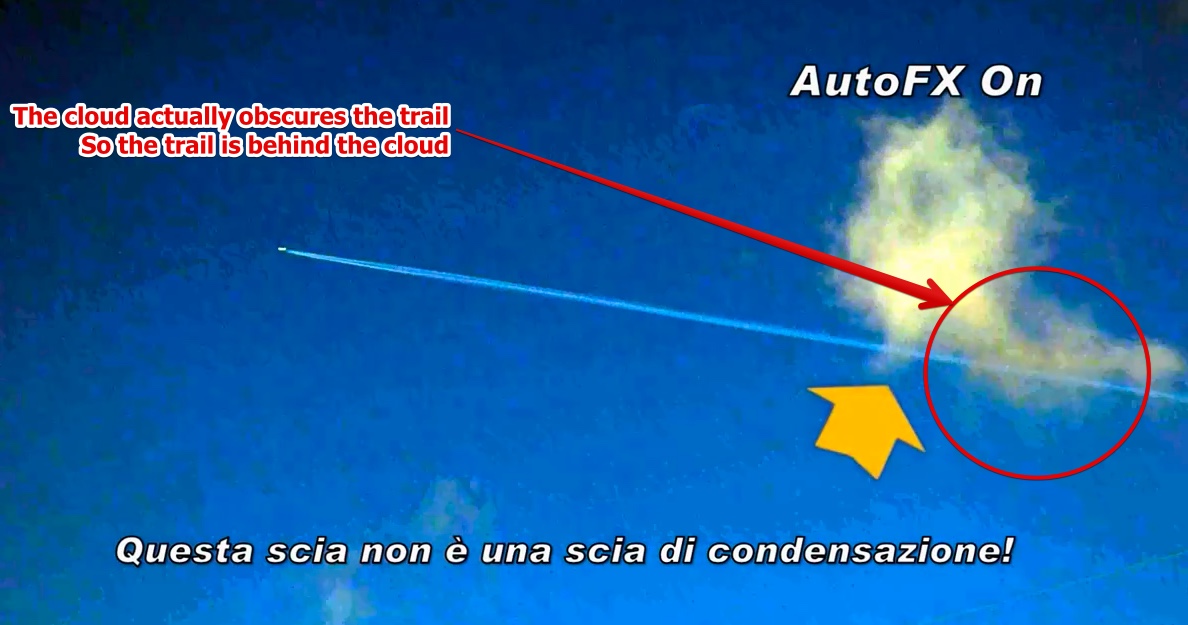 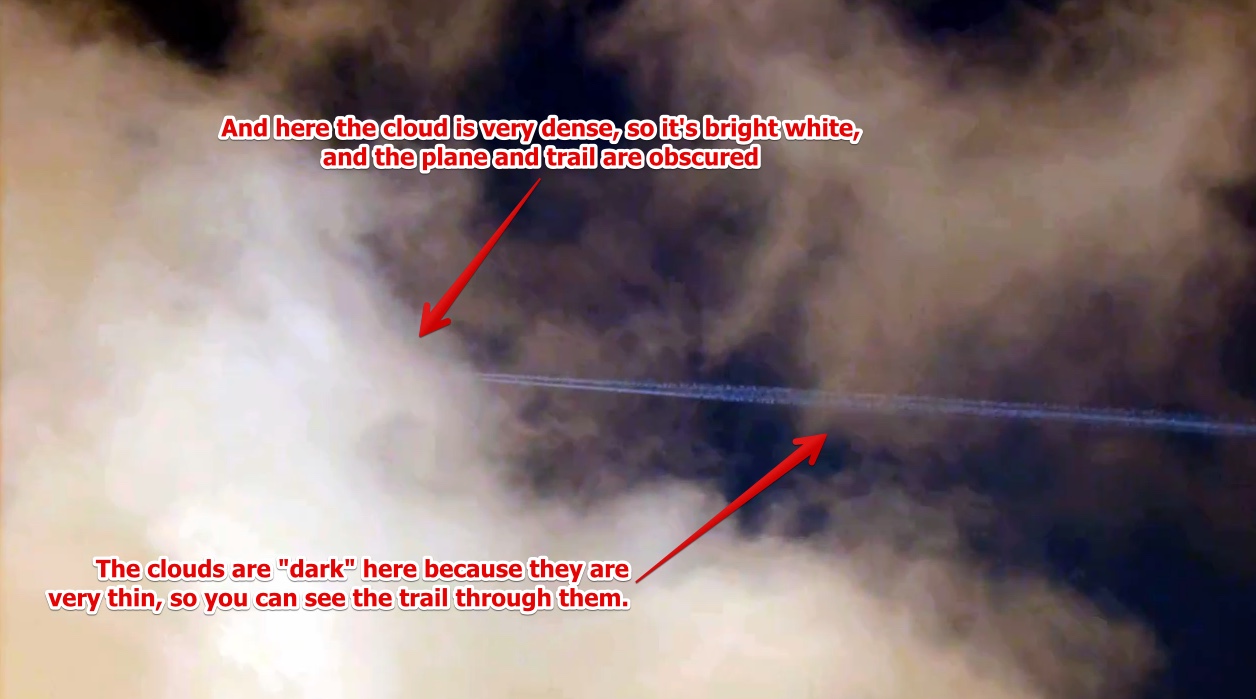 Trailspotter said:
Apparently, Rosario Marcianò (Tankerenemy) is aware of the debunking his latest video, but dismissed it on his FB page. He also has added the following comment to the video:
Click to expand...

Flightaware does not seem to have the tracks for that flight, so I can't get it into Google Earth.

According to FR24, AUA425L followed essentially the same path on the map as TAP871, but was about one minute behind and descending at the time of the video. When it came in the camera's field of view, it already was below 17000 ft (5 km). I've modelled its path on Google Earth as a level flight at this altitude, it turned out to be obscured by the hills. Therefore it is not likely that this plane could have been seen from this viewpoint.
Last edited: Nov 10, 2014
You must log in or register to reply here.
Related Articles
[Debunked] Viral internet meme indirectly claiming that Greenland has already fully melted.
AiG Debunked: Fossils Fail to Find Major Transition From Dinosaurs to Birds
Debunked: UK undertaker's claim that Covid vaccine is responsible for spike in deaths
Debunked: 9/11 truth experts are knowledgeable professionals and their judgments are to be trusted
Debunked: Explosions preparatory to demolition of the WTC North Tower are visible as Flight 175 crashes into the South Tower
Debunked: Pfizer Developing a Twice-Per-Day COVID Pill, Taken Alongside Vaccines
Debunked: Demolition “squib” is visible at top of WTC North Tower before Flight 11 crash
Debunked: Construction worker Philip Morelli experienced an explosion in the sub-basement of the North Tower
Debunked: ABC News correspondent George Stephanopoulos reported an explosion in the subway
Debunked: Debris from twin towers was projected upward by explosives
Debunked: Government officials revealed having foreknowledge of Building 7’s collapse
Debunked: NIST computer simulation of Building 7 collapse is inaccurate
Debunked: FEMA reported finding evidence that steel had melted.
Debunked: VP Dick Cheney ordered a standdown of jet fighters on 9/11
Debunked: Claim that Bobby McIlvaine's injuries ("lacerations") are best explained as result of glass shards and debris from bombs
Debunked: World Trade Center should not have collapsed due to 9/11 fires
Debunked: Firefighter reports of secondary explosions
Debunked: Steel was hurled hundreds of feet by explosives
Debunked: Demolition Explosion Before Collapse of South Tower
Debunked: Explosion in South Tower Lobby
Debunked: Mysterious Explosion Before the Flight 11 Crash
Debunked: Marx: "The classes and the races too weak to master the new conditions must give way... They must perish in the revolutionary Holocaust"
Poll : Which DOD Navy video do you consider debunked ?
Debunked: Diving Triangle UFO Photos from Reddit [Fake]
[Debunked] Object Seen From Airplane Above Canberra: 04 Apr 2012
Debunked: Claim that Joe Biden's hand passes through microphone during White House press gaggle, 16th March 2021
Debunked: "Interdimensional being" caught on CCTV in Neza, Mexico
Debunked: Atmospheric pressure on Mars is 9 PSI, not 0.09 PSI as claimed by NASA
Debunked: missing cable on Perseverance landing footage proves it is fake.
Debunked: Biden's Oval Office "Coming Apart at the Seams" [It's a Door]
Debunked: UFO over California Highway (TMZ)
Debunked: 7 Alleged photos of aliens
Debunked: Biden signing "Blank" Executive Orders
Debunked: Biden in "Fake" Oval Office
Debunked: UN hidden camera: the first UFO contact happened [Deep Fake]
Debunked: 94% of Fulton County Ballots Manually Adjudicated [It's a Process all Batches go Through]
Debunked: "Missile Strike" caused Nashville Explosion
Debunked: Nashville Explosion was "Across the Street" from the RV
Debunked: "Error rate of 68.5% Allowable is .0008%" [Neither is True]
Debunked: Claim that the Electoral College Count On Jan 6 will Change the Election
Debunked: Einstein wrote "blind belief in authority is the greatest enemy of truth"
Debunked: Navid Keshavarz-Nia's Claims of "A Sudden Rise in Slope" as Election Fraud Evidence
Debunked: Trump's Claim of "1,126,940 votes created out of thin air" in PA
Debunked: Crowder's "Fraud Week" Title Graphic (and Why it Matters)
Debunked: Democratic senators complained about 'vote switching' by Dominion voting machines in 2019
Debunked: The Democrats are trying to take away freedom of religion
Debunked: Dr. Shiva's Scatterplot Analysis of Michigan Precincts
Debunked: Suspicious "Biden Only" Ballots in Georgia
Debunked: "Nancy Pelosi's long time Chief of Staff is a key executive at Dominion Voting"
Debunked: Wisconsin Turnout 89% Impossible High [Actually 72%]
Share:
Facebook Twitter Reddit Pinterest Tumblr WhatsApp Email Share Link