Bob Orr confirms the two Boston bombing suspects are brothers, confirms name of one suspect as Dzhokhar Tsarnaev. They're from somewhere south of Chechnya.

Alhazred The Sane said:
Oh wait, I forgot all about the CIA mind control zombification projects.
Click to expand...

Awaiting a "hiding in plain sight" FACEPALM moment from an unregistered user...

Wow.
So they weren't actually *wrong*, they were so right they forced the government to run an alternative scenario.
I don't know if the idea that they can hang themselves with their own words ('give them enough rope') applies, because they just seem to use the rope to make swings instead.

HappyMonday said:
This one is being passed around -

University of Mobile’s Cross Country Coach, who was near the finish line of the Boston Marathon when a series of explosions went off, said he thought it was odd there were bomb sniffing dogs at the start and finish lines.

Stevenson had just finished the marathon. His wife had been sitting in one of the seating sections where an explosion went off, but thankfully she left her seat and was walking to meet up with him.

“There was just smoke, another explosion went off,” Stevenson said. “We all started running. There were people crying.”

Stevenson said there was no question in his mind that this was an intentional act.

Content from external source
The 'drill' aspect is considered suspicious, as it has been in other attacks.
Click to expand...

This debunks itself since no bombs went off in seating areas.

Relevant to this thread:

exu156 said:
Relevant to this thread:

I hope training like this can help both prevent an attack and/or help catch bad guys quicker and help save lives if one happens. I'm sure this happens more often than people think. They probably happen without the general public really noticing it took place or at least very few people. I'm not sure how preparation for a drill that was supposed to take place 2 months after the bombing means it is some how a clue to a false flag.

But two months before the training exercise was to take place, the city was hit with a real terrorist attack executed in a frighteningly similar fashion. The chaos of the Boston Marathon bombings disrupted plans for the exercise, initially scheduled for this weekend, forcing police to postpone. Now officials must retool aspects of the training.

Mick West said:
"Natural News" claims that there were suspicious exercises on the same day as the Boston Marathon bombings

(NaturalNews) Two bombs have rocked the streets of Boston and reportedly injured 22 marathon runners (two have reportedly died). It's too early to know the cause of these explosions, but you can rest assured both the state and federal government will try to use this tragic event to blame whatever convenient enemies are most advantageous for the government.

No one has yet stepped forward to claim responsibility for the bombs, and the fact that no firearms were used in the attack may indicate this was NOT part of a false flag effort by the government to try to blame gun owners. (But it's still way too early to tell...)

Here at Natural News, we are horrified at this loss of innocent life, and we are praying for the victims of this bombing as well as their families.
Bomb squad was running "controlled explosion" on the same day

What's not yet being reported by the mainstream media is that a "controlled explosion" was under way on the same day as the marathon explosion.

As the Boston Globe tweeted today, "Officials: There will be a controlled explosion opposite the library within one minute as part of bomb squad activities."

Some people believe this explosion might have been part of the demolition of another bomb. It seems unlikely, however, that a bomb at the library, one mile away, could be so quickly located and rigged to be exploded by the bomb squad in less than one hour following the initial explosions at the marathon.

Content from external source
No, really, it's not. The Library is directly opposite where the first bomb went off, hence "opposite the library", is the sidewalk, where the bomb exploded. Lots of people dropped their bags as they ran. 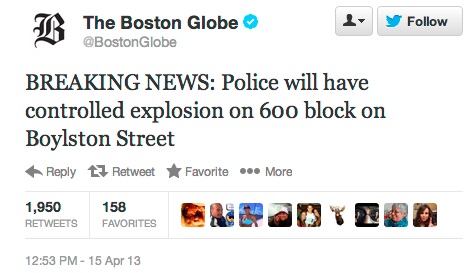 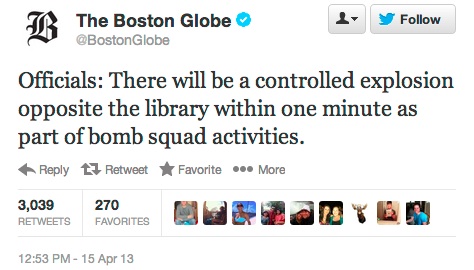 Obviously referring to the same thing, and simply clarifying the location.

Then AN HOUR LATER, they hear of the "explosion" at the JFK library: 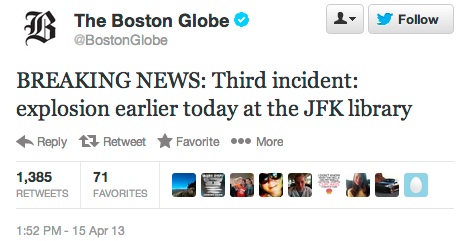 (Notice it's not "The Library", which is what they call the main Boston Public Library, as you would expect).

And much later they note it seems to be just a fire: 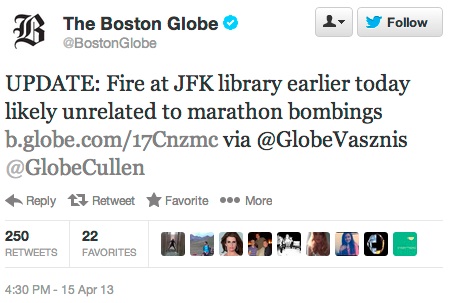 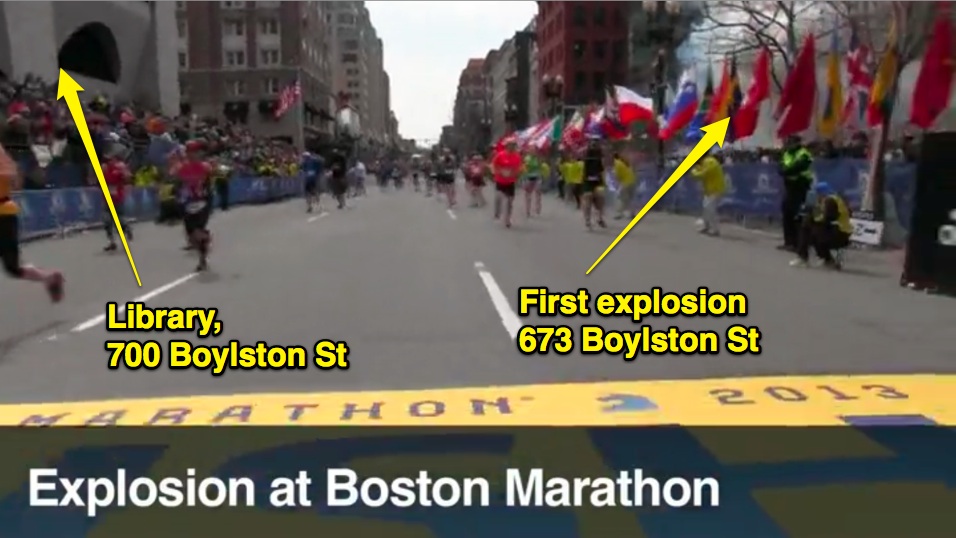 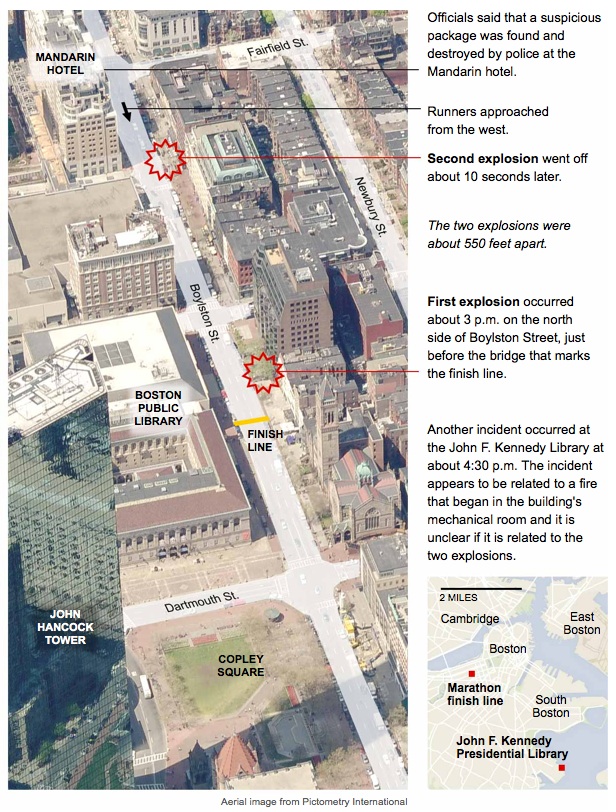 (Above image via Reddit, not sure of the source, but the positions are accurate)

Natural News seems to basically just making things up to fulfill their preconceived idea of what happened.
Click to expand...

THE TIME STAMP ON TWITTER FROM THE BOSTON GLOBE IS NOT PACIFIC TIME. IT IS THE TIME ZONE WHERE THE BOSTON GLOBE NEWSPAPER RESIDES. IN BOSTON WHICH IS EASTERN TIME ZONE. THIS HAS BEEN CONFIRMED WITH TWITTER AND THIS NOW BRINGS TO LIGHT THE FACT THAT THE TWEET WAS SENT PRIOR TO THE EXPLOSION. THIS IS NOW EVIDENCE FOR TRIAL. BOSTON GLOBE HAS SOME EXPLAINING TO DO.

Twitter updates to the viewer's timezone setting, not the posters.

Nathan Folks said:
THE TIME STAMP ON TWITTER FROM THE BOSTON GLOBE IS NOT PACIFIC TIME. IT IS THE TIME ZONE WHERE THE BOSTON GLOBE NEWSPAPER RESIDES. IN BOSTON WHICH IS EASTERN TIME ZONE. THIS HAS BEEN CONFIRMED WITH TWITTER AND THIS NOW BRINGS TO LIGHT THE FACT THAT THE TWEET WAS SENT PRIOR TO THE EXPLOSION. THIS IS NOW EVIDENCE FOR TRIAL. BOSTON GLOBE HAS SOME EXPLAINING TO DO.
Click to expand...

My computer is set to PST, so it looks like this to me: 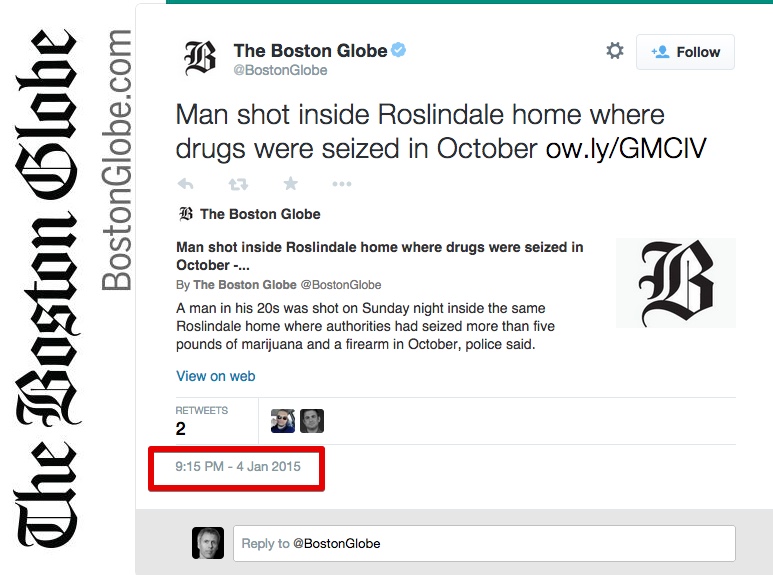 If I change my time zone to Central, in the Twitter settings: 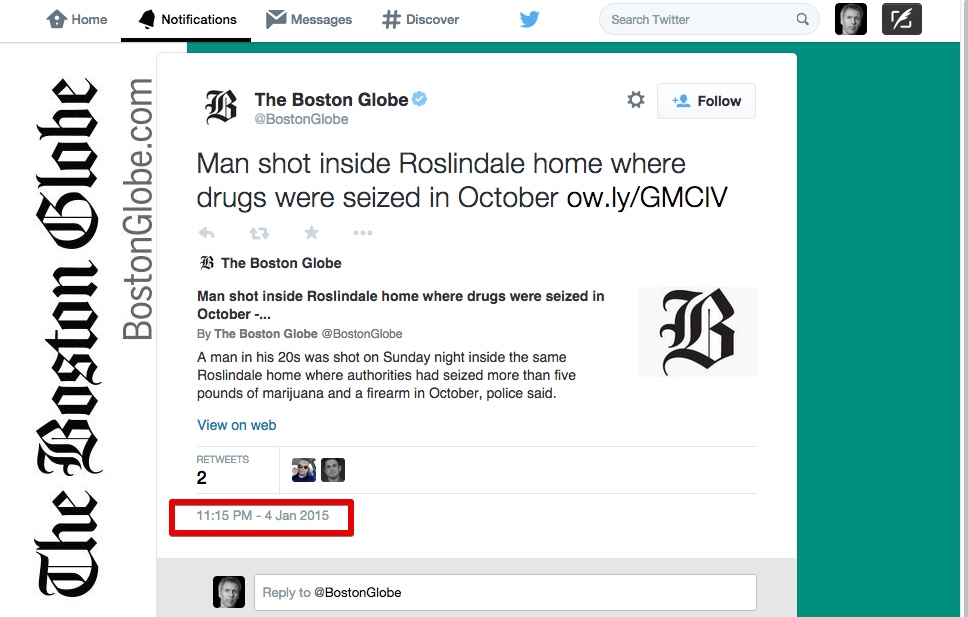 You should verify this yourself.

both my time zones are Eastern and it still says 12:53


edit. fixed it. well, that was a royal pain. everything read ok ... all my timezones were correct....but i "synchronized"/UPDATE my clock under the "internet time tab" anyway.

and then i "avoid utc-8" under my ggogle mail because the 12:53 was showing in my google search. not just on twitter.

but i think it was the "syncronize internet time tab" under my computer clock because both IE and Google chrome were reading 12:53 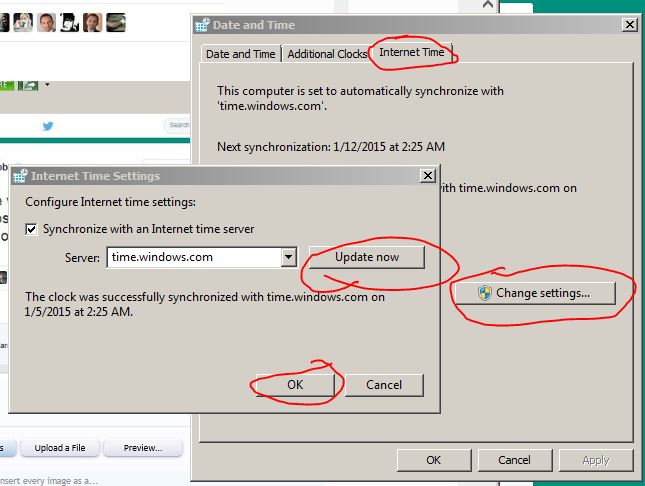 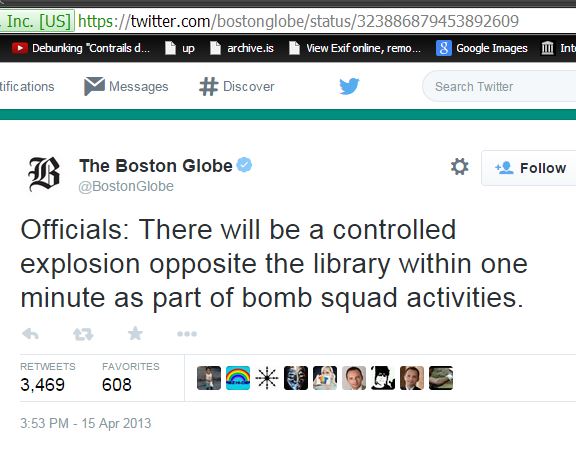 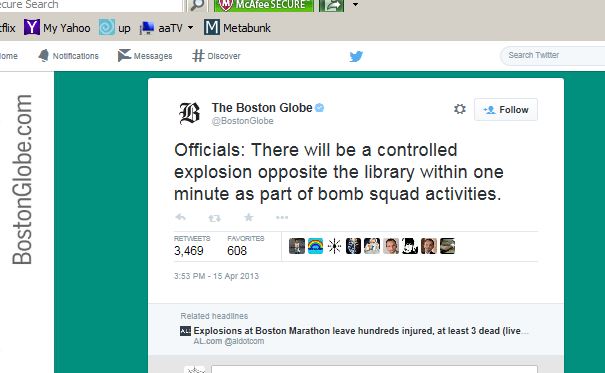 Nathan Folks said:
THIS HAS BEEN CONFIRMED WITH TWITTER AND THIS NOW BRINGS TO LIGHT THE FACT THAT THE TWEET WAS SENT PRIOR TO THE EXPLOSION.
Click to expand...

Can you provide evidence of this, please?

Also, if the tweet was sent before the bombings, then why didn't anybody pipe up and try to stop them?

Timestamp update: (see post #94 above) just doing some timestamps verifications on SH and check this.... NOW my Chrome browser/Google is still showing the correct time but my Internet Explorer has gone back to showing Pacific time. and again under my computer clock settings i'm still on Eastern time zone.

This is going to be a hard sell to people, to fix their computer settings!! I wonder if it has to do with browser updates??

Luckily it is well documented that Vance's first Press conference for SH was at 1:41pm. so the twitter timestamped posts for that event (well some.. there are many) are here...

Thanks for the Twitter stuff, guys. This is another issue that I commonly see with conspiracy theorists. I had Twitter, but after being attacked daily by Boston "truthers" I finally gave it up about a year ago, so thus, I can't confirm this stuff for myself. The work done is here is, as always, appreciated!

Sorry so late in the piece - just came across a Wired.com article on the Boston Bomb Squad and their efforts on the day. May shed a bit more light on things re the "controlled explosion" debate.

(Apologies if I've missed it being posted already.)

Specifically re the controlled blast:

...There he found his teammate James Parker, who had turned his attention to a large, pristine bag sitting upright next to the initial blast site. The crowd had mostly dispersed, and it looked so suspicious, he hadn’t cut into it.

Instead, Parker put on a bomb suit of his own and broke out the Logos XR200—a portable x-ray unit powered by a Dewalt battery from a cordless drill. He put a thin imaging plate next to the bag and shot it with the x-ray source. He then developed the plate in the Logos Imaging system, “the breadmaker,” a gray appliance in a portable case. Parker shot two x-rays. The image they revealed was textbook: a heavy metal tube with wiring throughout.

With so many other potential bombs littering Boylston Street, McCormick decided there was no more time to investigate this one. The techs built a disruptive tool, a water bottle with an explosive charge down the center axis, and placed it carefully next to the clean bag. The area was clear, so the techs called their superiors to let them know he was going to crank it off. Within minutes, every national cable news outlet announced that the Boston bomb squad was about to conduct a controlled blast.

McCormick detonated the device and walked over to inspect his handiwork. He had just blown up a camera bag.

Content from external source
Disruptors are a good bit of kit, essentially use a jet of water to punch open and disperse the contents of a package. Usually a much better option than counter charging an IED as they're aimed at preventing a high order detonation.

ColtCabana said:
Thanks for the Twitter stuff, guys. This is another issue that I commonly see with conspiracy theorists. I had Twitter, but after being attacked daily by Boston "truthers" I finally gave it up about a year ago, so thus, I can't confirm this stuff for myself. The work done is here is, as always, appreciated!
Click to expand...

If you can't get them to fix their computer settings, the real time is always in "the source code".

with my above example (note my Internet Explorer is not working again..Vance's speech was at 1:41 pm),
1. open the tweet in it's own page by clicking the date
2. right click mouse and chose "view source code"
3. Under the "edit" button (top menu) choose "find on page"
4. type in "timestamp"
5. look for data-time and the number
This number is the UNIX timestamp code.
6. use a converter to convert the UNIX time to the timezone the tweet was sent from. For Sandy Hook this was Eastern Standard time: DAYLIGHT SAVINGS 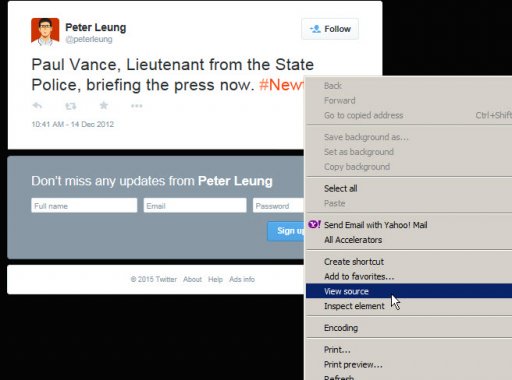 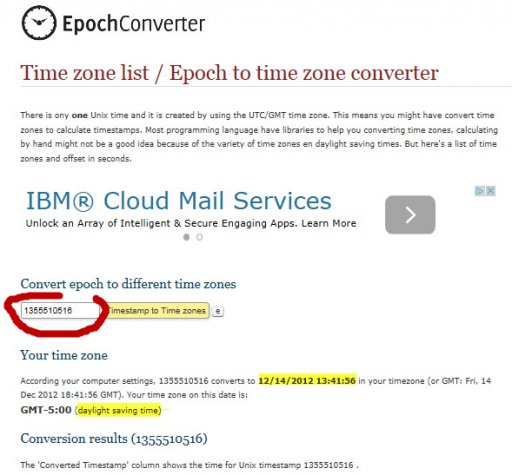