JRBids said:
It is interesting that he only "began to notice" traile in spring of 2014. Supposedly the "program" has been going on for how long? Some people say the 50s, some the 90s. He says these are tanker jets but never says how he identifies them as tanker jets. That's enough for the chemtrail crowd though. They've posted the paper everywhere.
Click to expand...

It seems the professor is not terribly observant. I just clicked a random point on a freeway in San Diego on Google Maps and looked back through the historical Street View imagery (of which there is a lot to choose from in this area).

This is from an image captured in October 2011: 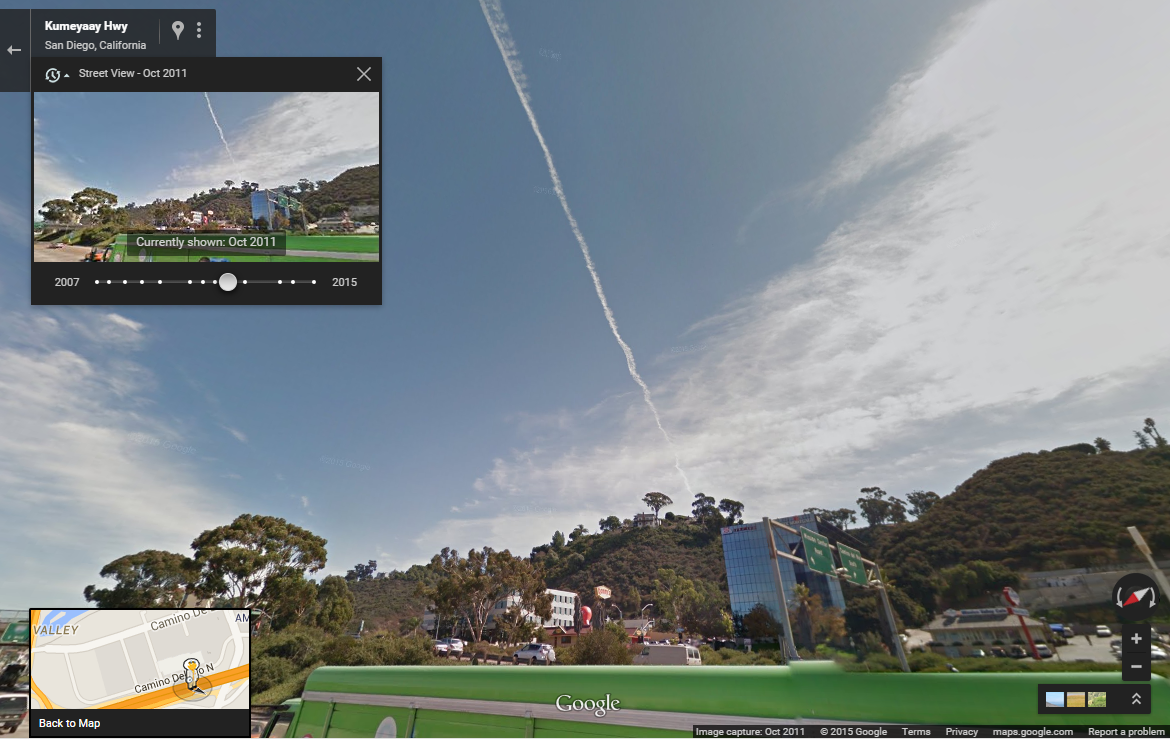 The same spot in summer 2014, after the start of the alleged spraying campaign. 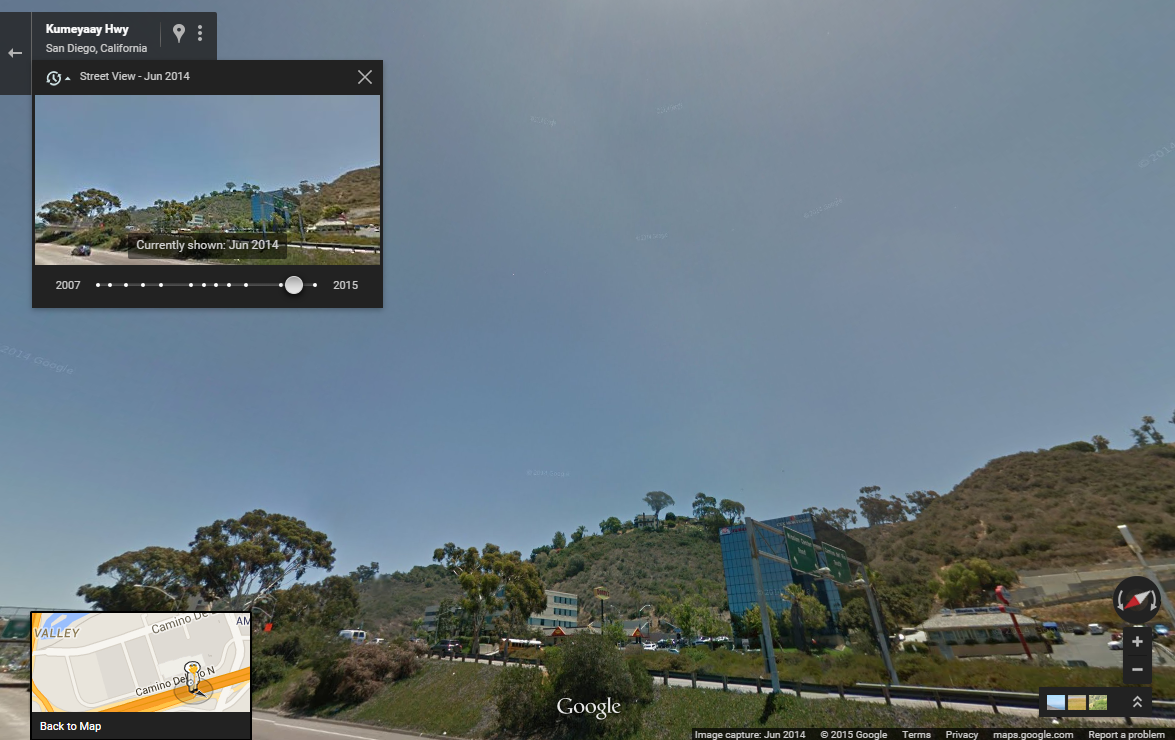 In my opinion.....2014 is obviously when Herndon "woke up!"[tm], therefore, it's when the spraying started.

The problem is the believers begin with the position that Chemtrails exist and then proceed to collect evidence to support their beliefs. They don't question whether there are alternative explanations for their assumptions. Also, they reject emotionally that their assumptions supporting the existence of Chemtrails has a lower probability of being correct than the scientific explanations they reject. Herndon seems to have fallen into this rut.

Once someone believes the government or "they" are capable of lying and doing things to the people without their consent some people assume the worst first and it clouds their objectivity. Herndon may also fall into this category, it was certainly a trap I fell into.
Last edited: Aug 20, 2015

George B said:
Yes, I think they will cite it everywhere; and that might not be a bad thing. Why?

1) It gives them a motive to further investigate science as a tool to support their positions.

2) This particular paper can be challenged using sound scientific principles which they now have ownership of. A position they have, until now, rejected except in the most limited ways. Turning to fringe websites and YouTube videos instead of NOAA, NASA, FAA, and academic sources, etc.
Click to expand...

I think you are giving chemtrail believers too much credit. It doesn't matter whether it's credible, or even what it actually says. All that matters is that it got published and it appears to back up their position. End of story.

Trailblazer said:
I think you are giving chemtrail believers too much credit. It doesn't matter whether it's credible, or even what it actually says. All that matters is that it got published and it appears to back up their position. End of story.
Click to expand...

I really don't disagree for the vast number of believers; however, the rare one that will grasp that if one uses science to justify their position they are obligated to validate the correctness of the evidence. Sort of "he who lives by the sword dies by the sword."

Trailblazer said:
I think you are giving chemtrail believers too much credit. It doesn't matter whether it's credible, or even what it actually says. All that matters is that it got published and it appears to back up their position. End of story.
Click to expand...

Absolutely! How many videos do they repost with the word "PROOF!" in the title which say nothing at all what the claim of proof is.

George B said:
The problem is the believers begin with the position that Chemtrails exist and then proceed to collect evidence to support their beliefs. They don't question whether there are alternative explanations for their assumptions.
Click to expand...

I agree with you, George. Herndon's well was poisoned by the commonly accepted, though totally incorrect assumption
that crustal elements would not be found in air or rainfall.

He designed his experiment exactly as you describe:

The author submits the following hypothesis: Coal fly ash is most likely the aerosolized particulate sprayed in the troposphere by tanker-jets for geoengineering, weather-modification and climate-modification purposes.

The objectives of the research are to provide substantial scientific evidence as to the correctness of the hypothesis, namely, that coal fly ash is the aerosolized particulate sprayed in the troposphere by tanker-jets for geoengineering, weather-modification and climate-modification purposes and to reveal some of the adverse human public health consequences and the antagonistic consequences on Earth’s environment and biota.

Content from external source
No background research seems to have been done regarding what else might be the source, past data on what has previously been established for common elements found in dry or wet deposition.

The closest he comes to approaching that subject is this false claim for which he cites no reference:

Beside the observational commonality, post-spraying rainwater was frequently found to contain aluminum and barium, two elements usually not present in naturally-occurring rainwater

A basic rule in science is that we try to falsify, not confirm, hypotheses. Herndon seems unaware of this.

Herndon has a long history of his ideas being rejected, for decades in fact. He may just be so desperate to find success that when he found a belief system within which a set of people would accept rather than reject him he is willing to give them what they want to hear and vice versa. He may feel that since he has always been rejected, further rejection by mainstream is a small price to pay (or one which doesn't even matter) for acceptance by even a small number of people quite willing to have their biases confirmed. It wouldn't surprise me at all that the ACP fees normally charged by MDPI journals, several thousand dollars, were paid by some interested party and not Herndon at all.

But skephu is correct, and even children in lower grades are told about falsification.

Herndon's hypothesis could have been easily falsified by looking at what is ordinarily found in wet deposition(rain and snow) and dry deposition (ordinary dust in the wind). He didn't try to do so, he wanted to re-invent something which had already been established and well known.

There is an interesting 2012 review by John Timmer of Herndon’s book Indivisible Earth.

Timmer makes the point that self-publication is an ideal way of avoiding the scrutiny of peer review.

I liked how he put one of the consequences of this process:

The writing itself is fine, in that it's easy to follow these ideas. It's just that the scientific reasoning has gaps you could drive an aircraft carrier through. I'll give just a few examples.

Anyone know what Herndon is doing in Greece in Sept? 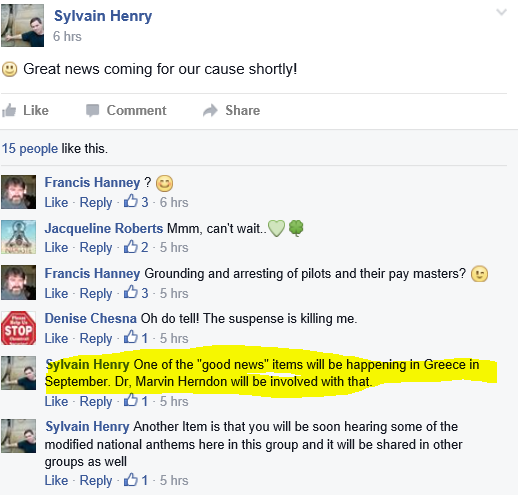 It may be some conference in Greece where Herndon plans to give a talk or something.

So Herndon could directly compare the fly ash leachate from his reference [10] to the rainwater collected in San Diego he converted the units to µg/L for his Table 1. His fly ash leachate values comes from Table 8: http://www.researchgate.net/profile...es/links/00b495253c011d9e5d000000.pdf#page=12

Those values have an average of 53.7 µg/g. To convert that to µg/L multiply it by the number of grams in a liter of rainwater. The proper conversion is 53,700 µg/L.

But Herndon's Table 1 for leached aluminum reads only 5370 µg/L: 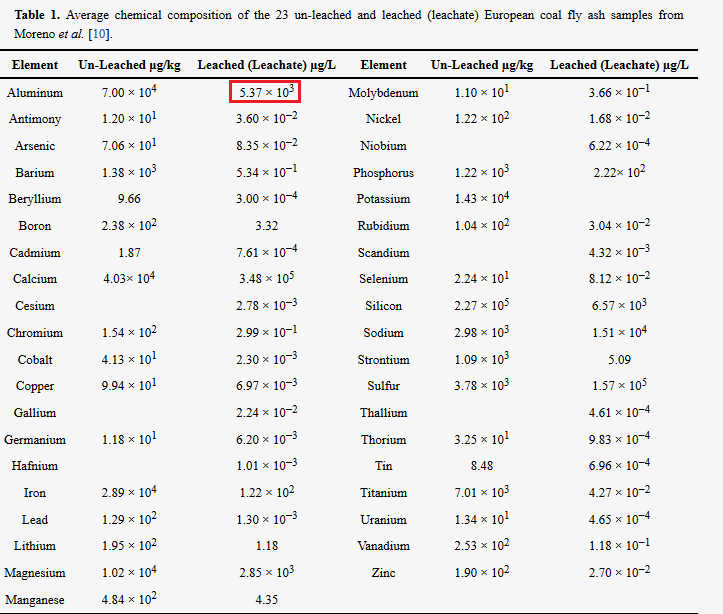 He converted wrong! He only used 100 g per liter of water when he tried to convert to µg/L.

I checked half a dozen of his other "leached" elements in his table and he made the same mistake for each one. They're all off by a factor of 10.

Note: the above doesn't invalidate his conclusions. He was comparing ratios; he could have converted the original source by multiplying by pi and it wouldn't change the outcome.

But looking at the range of values does invalidate his conclusions. The leachate of aluminum ranged from <0.1 to 271 µg/g but he only compared the average. If his claim that the two statistical tests have greater than 99% confidence intervals is true then that means there was a greater than 99% probability that equal quantities of coal fly ash from 23 coal-fired power plants from 4 different European countries were mixed together, transported to the US, and sprayed hundreds of miles downwind from San Diego and timed just right that it would mix with clouds that were getting ready to rain when it reached San Diego. And these 23 coal-fired power plants that were used in this study just so happens to be the only 23 power plants in the world that could create this unique mix.

Chew said:
Note: the above doesn't invalidate his conclusions.
Click to expand...

No, but it calls into question his general competence.

Staff member
Can someone check this:

Arsenic in Moreno is given in ng/g, the values are:

Which DOES invalidate his results. They seem to be all off by differing amounts.
Last edited: Aug 23, 2015

Staff member
I've converted Table 8 into a spreadsheet, and am comparing it against Herndon's Table 1

To determine the potential mobility of trace elements
from the fly ashes, the leaching test DIN 38414-S4 was
applied. This DIN method requires the mixing of 100 g of
solid material (dry weight) with a liter of distilled water in
2 l bottles during 24 h [30]. The major and trace element
contents in the leachates determined by means of ICP-AES
and ICP-MS.

Staff member
Take the more relevant Barium figure. In Table 1 he has Barium in leachate at 5.34E-01 µg/L which 0.534 ppb (there are a billion micrograms in 1L/1Kg)

Moreno have Ba in ng/g in Table 8. 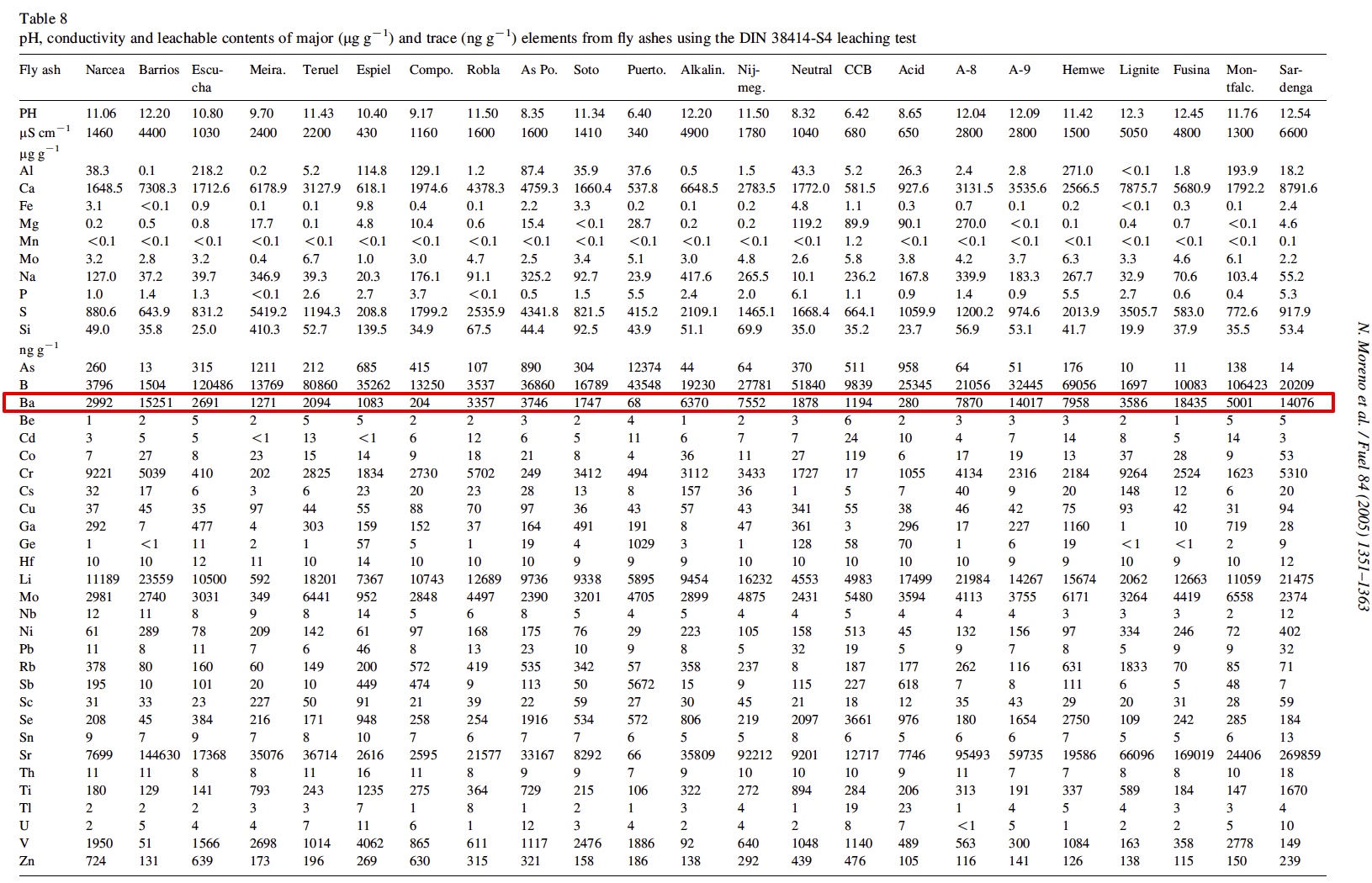 Staff member
However he seems to be using the correct ratios in his charts, type just don't match his table. 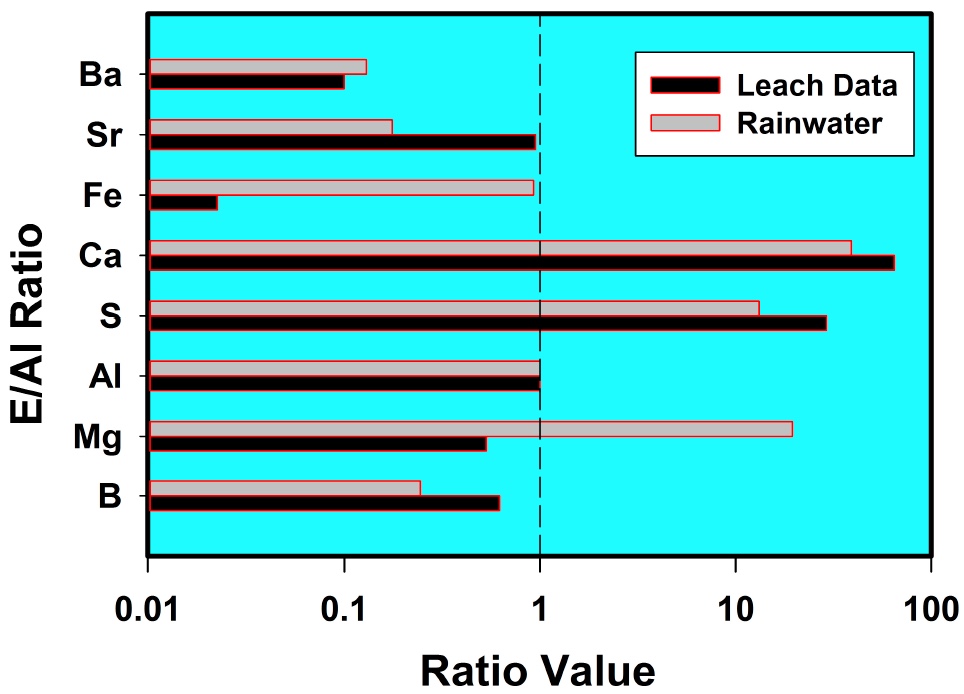 @Mick West , where is his rainwater data?

Chew said:
@Mick West , where is his rainwater data?
Click to expand...

It appears to be unpublished.

Mick West said:
It appears to be unpublished.
Click to expand...

Funny how the peer-reviewer didn't ask for the rainwater data...

I noticed earlier that something is wrong with his data in the table. For example, his strontium data in the table is wrong, but I assumed he just forgot to append the multiplier. However, his figure seems to be generated from the correct numbers, and then hopefully the statistical test was also done correctly, even though he interprets it incorrectly.
It's interesting that the Moreno data show that the mean strontium value is almost the same as the mean aluminum value. In rainwater, strontium is much lower.
By the way, the Moreno data show very skewed distributions, so I wouldn't even use means, I would have used medians instead.

skephu said:
his figure seems to be generated from the correct numbers
Click to expand...

Except of course that he shows the ratios of the means, not the means of the ratios.
This paper is just wrong in so many ways, pure junk indeed.

Staff member
How is he getting the Un-leached figures? 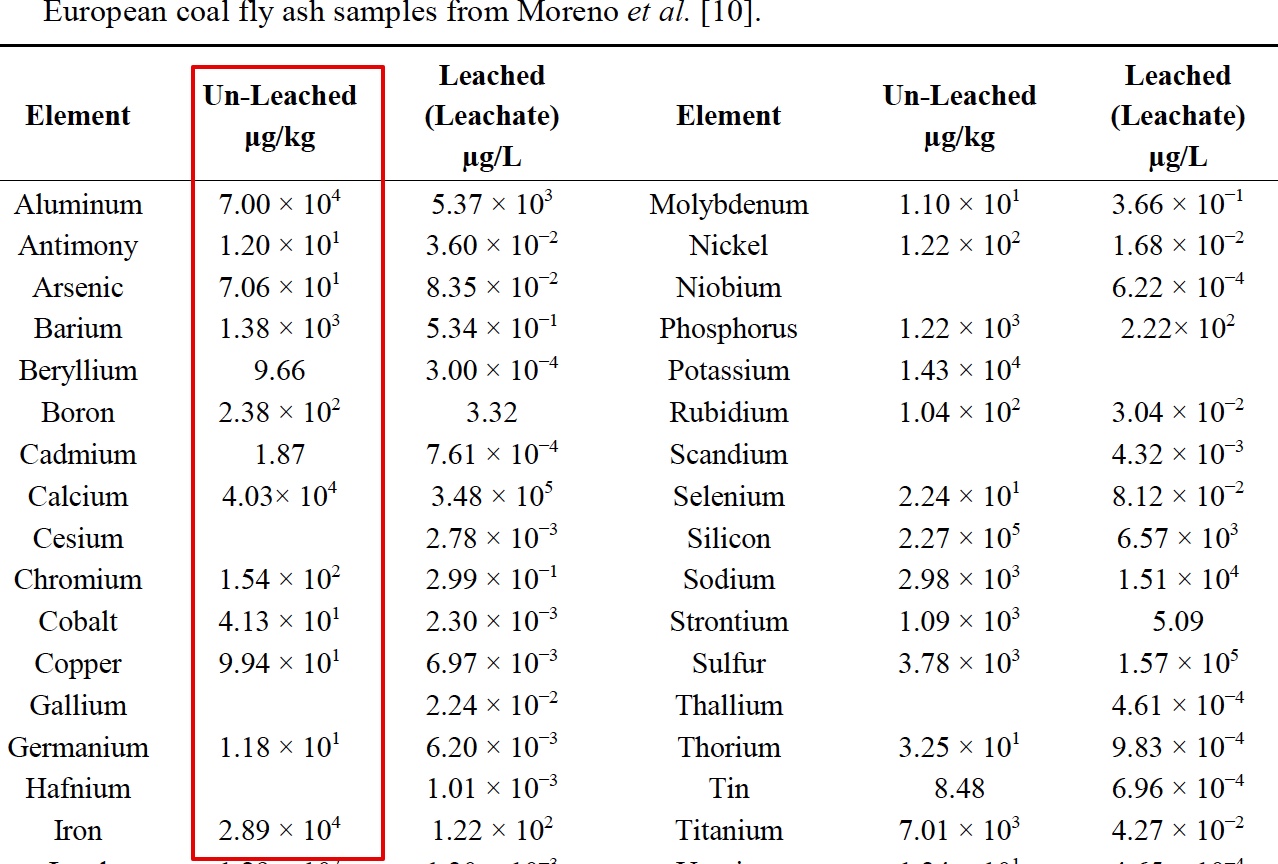 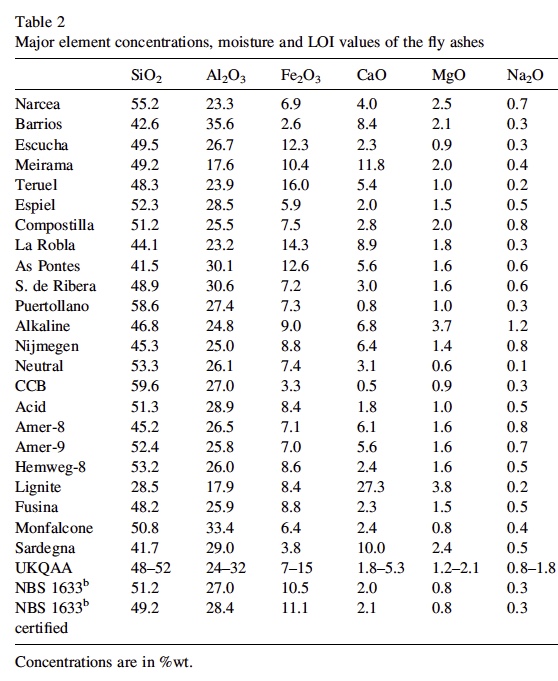 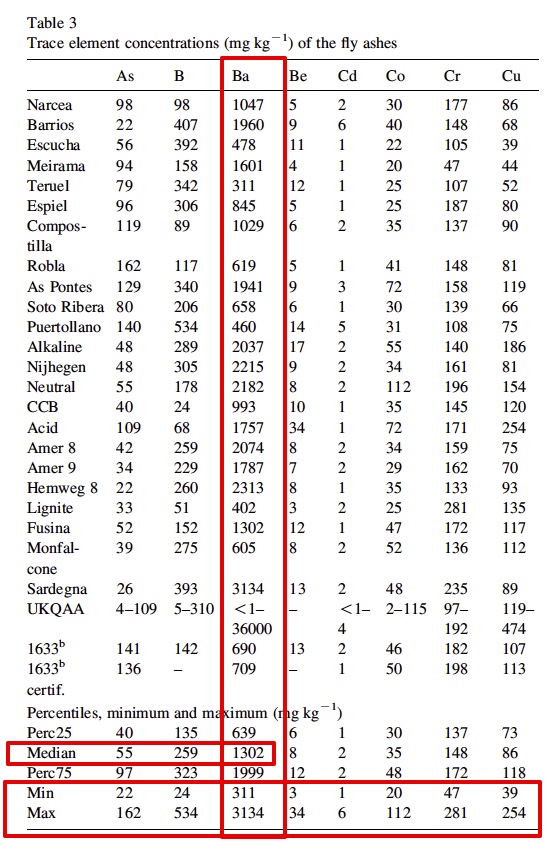 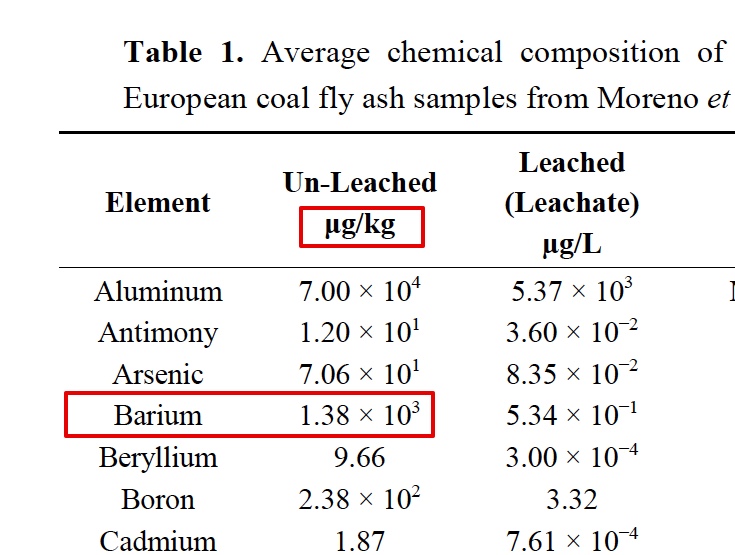 Herndon's un-leached coal fly ash Ba/Al ratio is on the diagram as being between 0.1 and 0.01 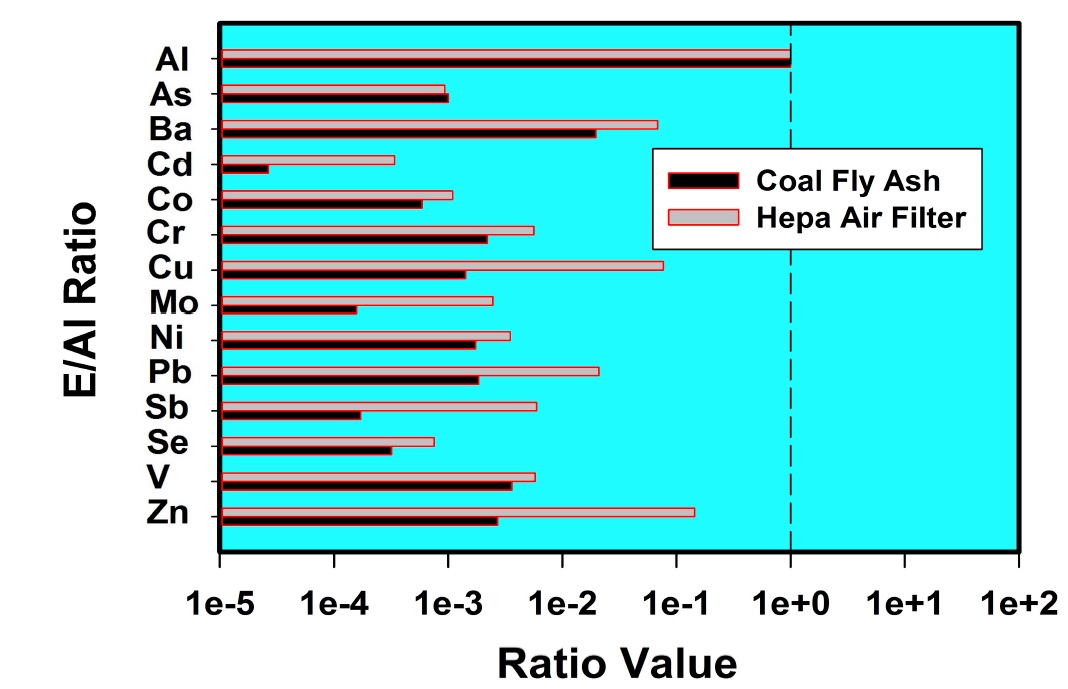 The Hepa filter results are
http://losangelesskywatch.org/lab-test-results 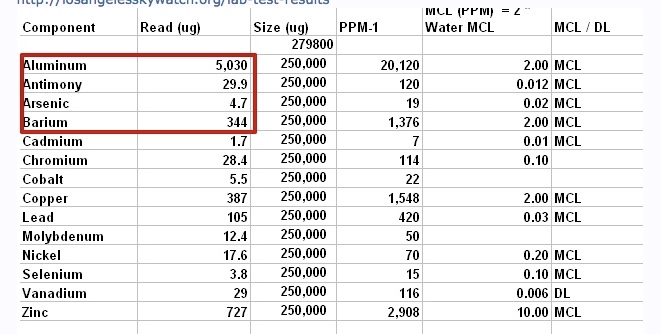 Staff member
(I was off by 100 on the above, corrected now)

Mick, you should not compare the mean with the median.

skephu said:
Mick, you should not compare the mean with the median.
Click to expand...

I'm not. I was just ballparking the "average" for the Aluminum values, as I'd not digitized that sheet, then the median value for Ba matched the value Herndon used (except his unit are wrong). I though there was a greater magnitude of error when I started down that road.

Staff member
Actual Moreno figure for un-leached fly ash Al2O3 is average (mean) 26.6%, or 14% elemental aluminum, which is the figure I used above when ballparking. There's a possible extra 0.5% from the Si02/Al2O3 column (which is about 2% average) but it's not clear what the division is there.