Conspiracy theorists claim that a cloud of white “smoke” that appeared to envelop the base of the South Tower in advance of the falling debris cloud from its collapse is evidence of explosives used in its demolition. In the 2014 David Hooper film, The Anatomy of a Great Deception (viewable in its entirety on YouTube at youtube.com/watch?v=l0Q5eZhCPuc ), a short and unsteady video clip is presented at the 48:25 mark that appears to show the smoke. Here is a frame from that point in Hooper’s film: 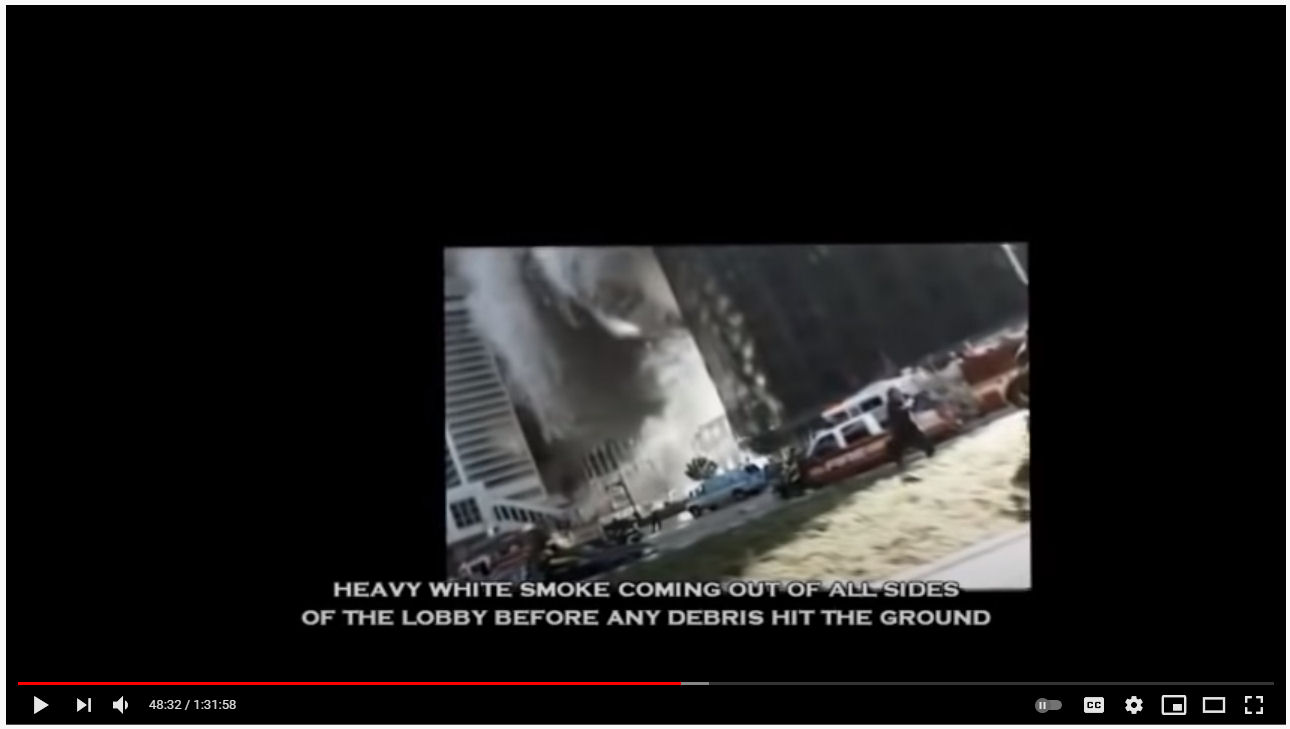 The narrator (David Hooper, himself) tells the audience:

“In this footage, which has been slowed, you can see white smoke emanating from the ground floor before the collapse wave arrives. It's an unsteady camera, but keep in mind, whoever recorded this was running for their life. It was like watching a stunt car explode before it crashes at the bottom of a cliff.”

However, that is a misrepresentation. What may appear to be white smoke emanating from the lower levels of the South Tower was really steam from water being directed onto a burning utility van (the same van discussed in my 8/13/2021 Metabunk thread). Below is a picture of the van engulfed in flames as seen from a point on West Street south of the Liberty Street Pedestrian Bridge. This is almost the exact same angle as in the video clip presented in Hooper’s film. 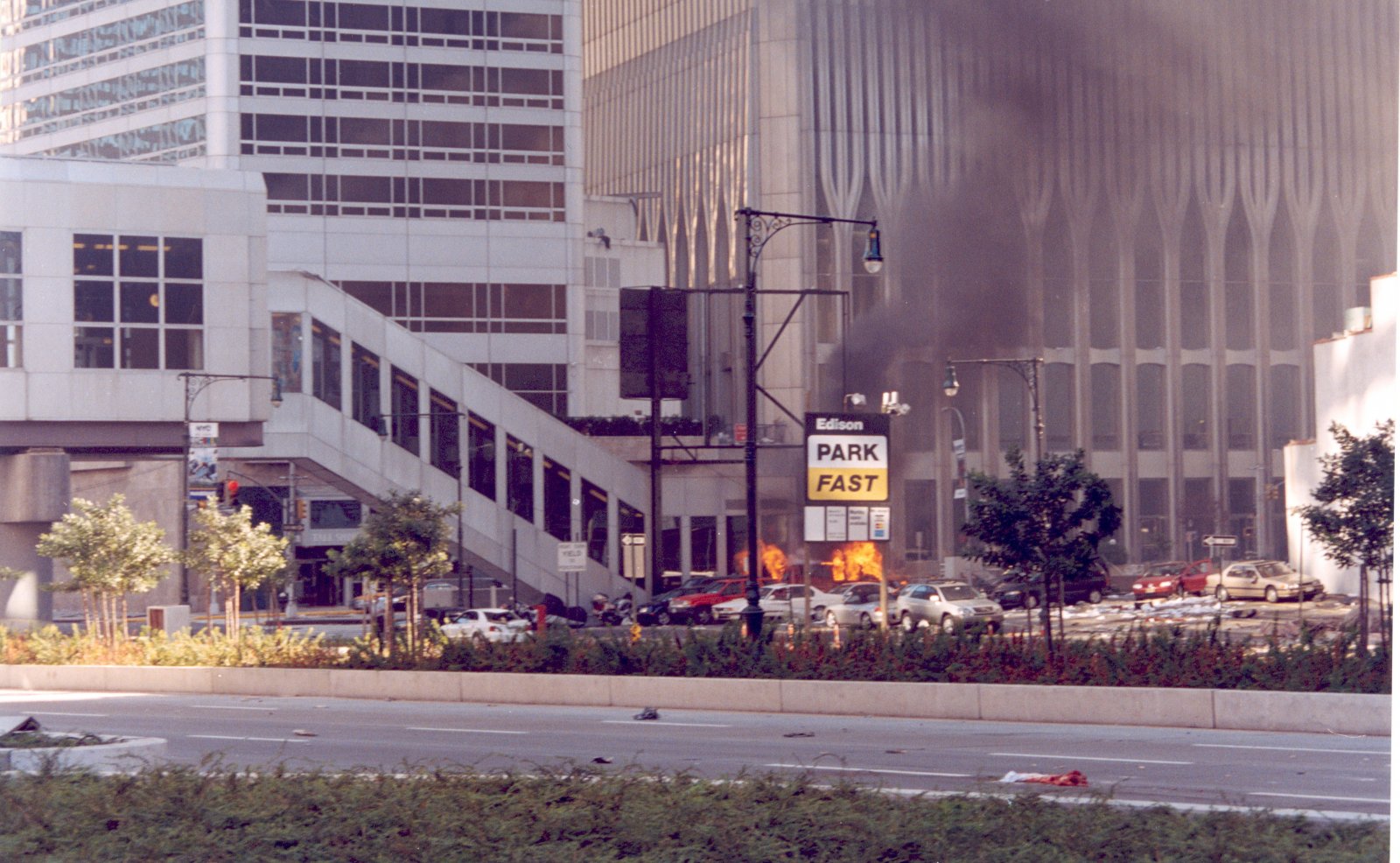 Presented below is a picture that shows the scene from a vantage point north of the pedestrian bridge as steam had begun to form a cloud above the van: 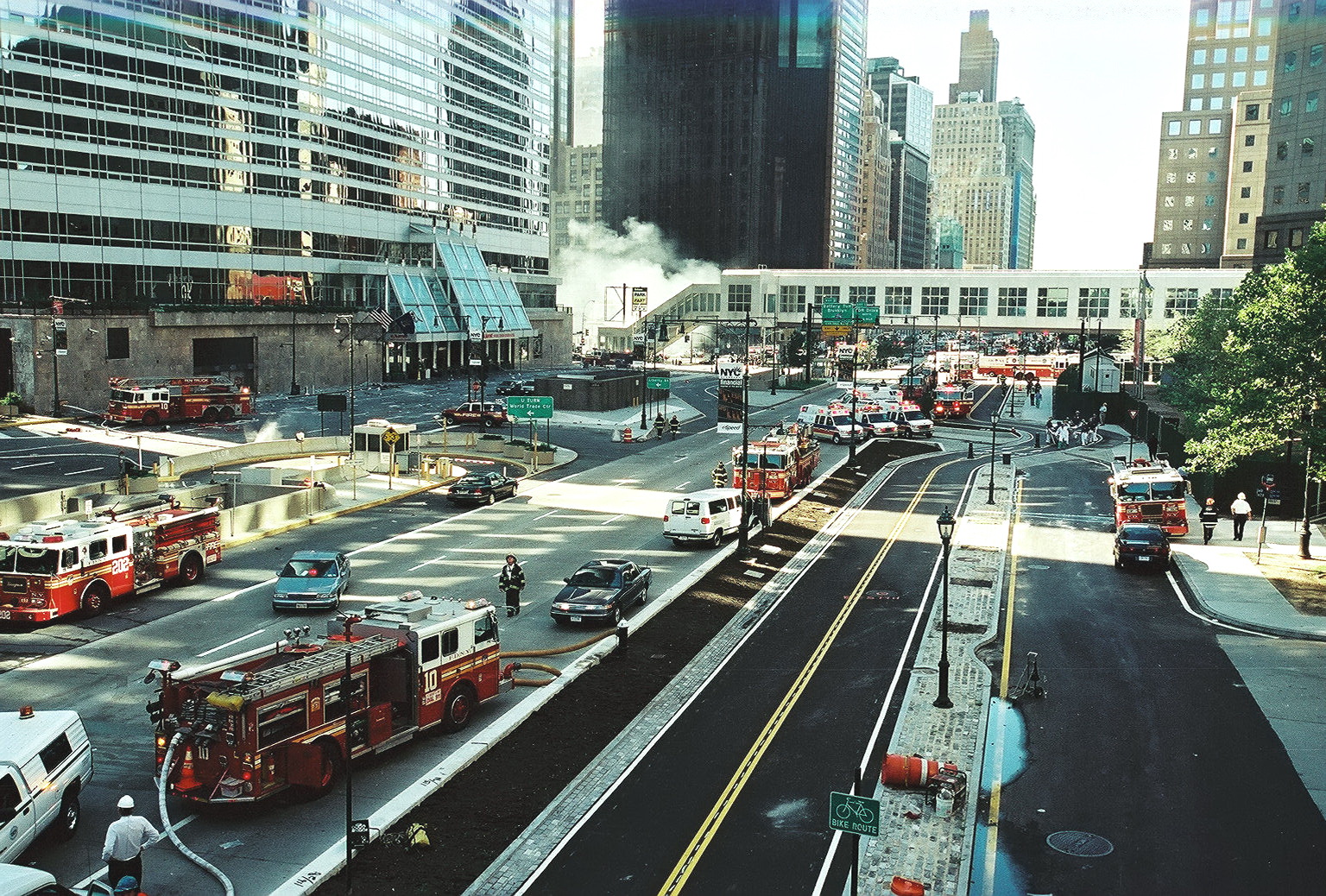 It is documented in the first responder oral histories that firefighters had been ordered to extinguish the flames in several burning vehicles that had been parked in a surface parking lot south of the South Tower and set ablaze by falling debris. The video in Hooper’s film was apparently taken just as the firefighters had begun their work and as the South Tower had begun to collapse.

Please note that both pictures presented above are from the 2011 NIST Freedom of Information Act release. Here are their URLs:

Marc Powell said:
several burning vehicles that had been parked in a surface parking lot south of the South Tower and set ablaze by falling debris.
Click to expand...

Was this debris from the initial impact?

Mendel said:
Was this debris from the initial impact?
Click to expand...

Debris from both airplane impacts rained down on the Edison Park Fast lot. There is no way to say for sure which was responsible for igniting the vehicle fires visible in NYPD photos. My guess would be Flight 175 since it was more directly overhead.
You must log in or register to reply here.