This Indiegogo campaign is so obviously impossible that I suspect it might be some kind of elaborate educational hoax teaching people not to trust Indiegogo campaigns. But in case it's not, spoiler, it doesn't work.

Delta Lambda claims to to compress your existing data on you phone up to 1000 times by using special algorithms.

Unfortunately this is mathematically impossible. Data has a limit in how much it can be compressed. The limit is based on the "entropy" of the data (a measure of how much it resembles random data). The vast majority of data on your hard drive (photos, videos, audio, apps) is already compressed by advanced algorithms that approach the theoretical limits. In addition they are compressed with lossy compression, meaning they lose data when compressed. Even pushing closer to theoretical limits, and even with a lossy algorithm, you'd be hard pressed to get 10% more space from you hard drive, let alone 1000x with a LOSSLESS algorith. Hence this chart is a joke: 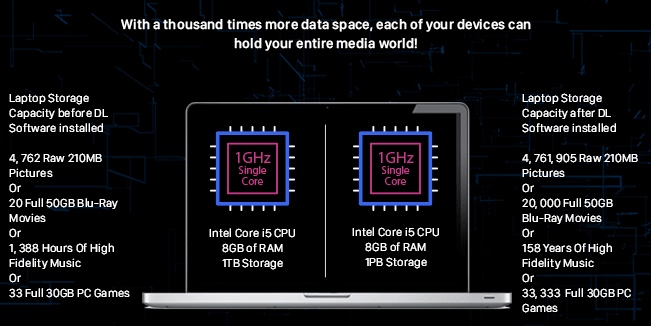 So what's going on here? Scam? Hoax? It seems obvious that loads of computer scientists would immediately explain why it won't work. So it's either a hoax, or a scam aimed at people disconnected from reality.

The problem is that the precise limit on how much something can be compressed without loss is an unsolved problem (Kolmogorov complexity), so it's possible that you could use this to argue that you've found a really really good solution. Information theory in general is also complicated, so possibly people who don't trust scientists might fall for it.

A simple test here is if the algorithm has won any of the data compression prizes out there. There's a few, and their goals are much lower than what Delta Lambda can actually do. Here one that should get them 50,000 euros.
https://en.wikipedia.org/wiki/Hutter_Prize

The Hutter Prize is a cash prize funded by Marcus Hutter which rewards data compression improvements on a specific 100 MB English text file. Specifically, the prize awards 500 euros for each one percent improvement (with 50,000 euros total funding)

The current record is 1/16th the size. DL claims 1/1000th. Since they have not stepped forward to claim their prize, this seems pretty obvious that it does not work.
Last edited: Jul 14, 2018

Staff member
They went a bit too far here:
http://dlcs.tech/whitepaper.pdf

Blockchain and Digital Ledgers are also prolific and emerging data consumers. Few noticed Bitcoin when it was introduced in 2009. Even less would suspect that in just ten years it would shake the financial world to its core, spawning a cryptocurrency industry whose valuation is rapidly approaching one TRILLION Dollars. However, steadily expanding numbers of users, and small block sizes can cause significant delays in blockchain transactions. Delta Lambda can eliminate this bottleneck by shrinking a Gigabyte of transactions into a one Megabyte block, increasing the speed, security, and scalability of the blockchain. Enhanced Viability. Reactive Currency - Smaller Blocks. Bigger Profit.

The bitcoin blockchain is not suitable for compression because it contains mostly random keys and checksums, which provably cannot be compressed. There some other data which can, but even a 1/2 size compression is highly implausible. 1/1000th is literally impossible.
F

Isn't this the storyline of the comedy show Silicon Valley?


The show aims to provide an unrealistic yet overly comedic account of a startup company, aptly named 'Pied Piper, who has just created a nextgen compression algorithm.

FatEarther said:
Isn't this the storyline of the comedy show Silicon Valley?
Click to expand...

Essentially yes, which (assuming it's a scam) might be something that they can point to to make people believe it. "Look, it worked on HBO!"

However the DL compression claims are at least 100x as large as the Pied Piper algorithm, which does not actually work.

The "Weissman score", which was invented for the show, does actually work though, and you can use it as a measure of real and imaginary schemes.
https://en.wikipedia.org/wiki/Weissman_score


The Weissman score is an efficiency metric for lossless compression applications, which was developed for fictional use. It compares both required time and compression ratio of measured applications, with those of a de facto standard according to the data type. It was developed by Tsachy Weissman, a professor at Stanford, and Vinith Misra, a graduate student, at the request of producers for HBO's television series Silicon Valley, about a fictional tech start-up.[1][2][3][4]

The formula is the following; where r is the compression ratio, T is the time required to compress, the overlined ones are the same metrics for a standard compressor, and alpha is a scaling constant.[1]

It reminds me of the 'Sloot Encoding System'. Dutch inventor Jan Sloot claimed around 1995 that he could compress full-length movies into just a few kilobytes. He had an apparatus which gave the impression that it was able to show several movies that were compressed on a memory card, which at that time didn't have a large capacity.
Just when some big investors (Roel Pieper, former CTO of Philips was one of them) were ready to invest millions of dollars in a company around this technology, Sloot died of a heart attack (in 1999). He took the secret behind his technology to his grave ...

Pepijn van Erp said:
It reminds me of the 'Sloot Encoding System'. Dutch inventor Jan Sloot claimed around 1995 that he could compress full-length movies into just a few kilobytes. He had an apparatus which gave the impression that it was able to show several movies that were compressed on a memory card, which at that time didn't have a large capacity.
Just when some big investors (Roel Pieper, former CTO of Philips was one of them) were ready to invest millions of dollars in a company around this technology, Sloot died of a heart attack (in 1999). He took the secret behind his technology to his grave ...

I saw a documentary about this one a while ago. It is to fascinating that Jan could fool Philips! He demo'ed the box for them, but did not allow the engineers from Philips to look inside the box. Wonder why?

Pepijn van Erp said:
Just when some big investors (Roel Pieper, former CTO of Philips was one of them) were ready to invest millions of dollars in a company around this technology, Sloot died of a heart attack (in 1999). He took the secret behind his technology to his grave ...
Click to expand...

This is reminiscent of the story behind several other scams like free (or nearly free) energy. Somone claims to invent something. Then they don't produce it (or they eventually die, as everyone does) and people claim that there was a big cover-up and sometimes that the the person was assassinated.

I saw this first shared on an esoteric ET/UFO group on Facebook. 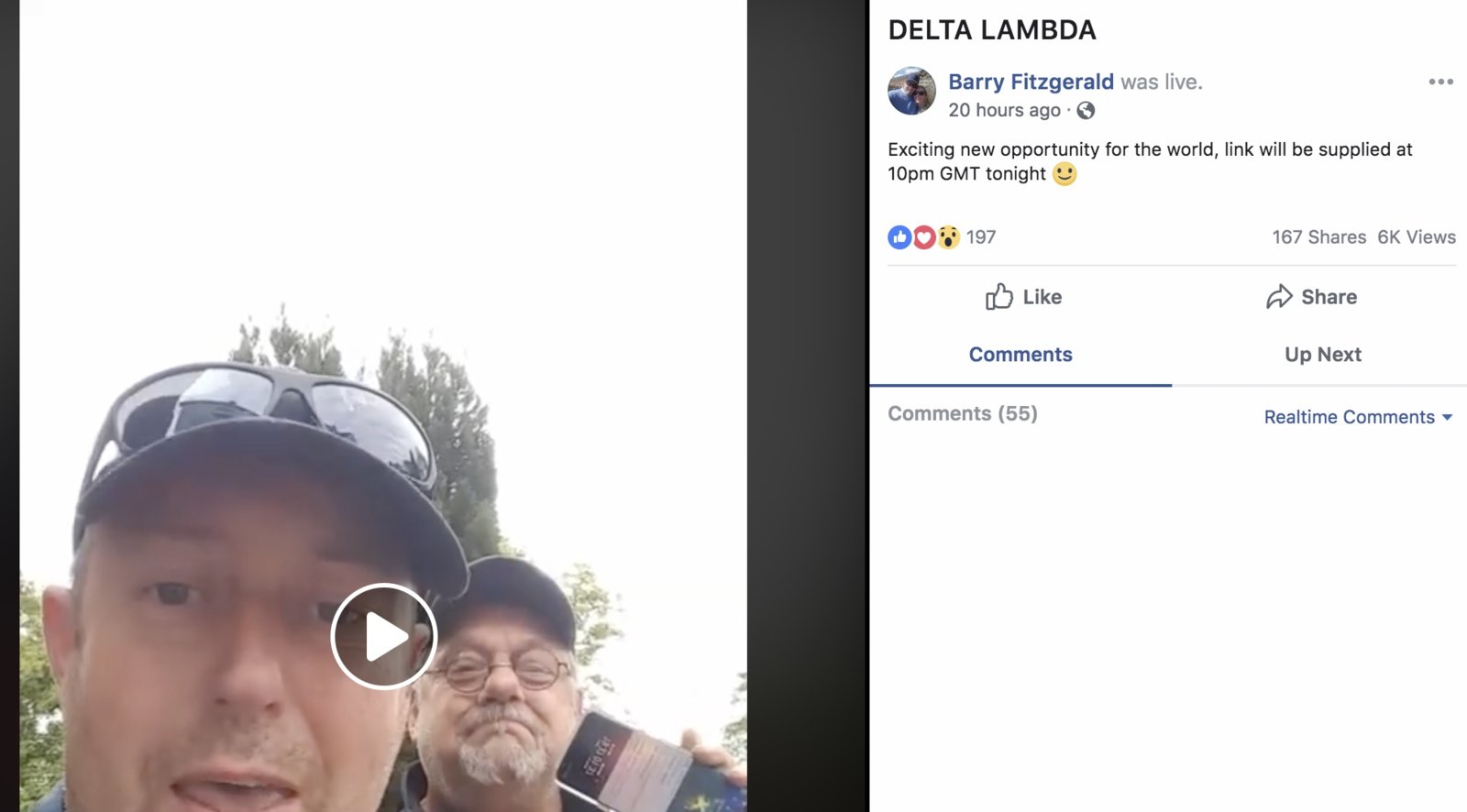 The guys in the video are the "Executive team", and are both mostly active in UFOology (and esoteric related topics like alien abductions, corpses, underground bases, etc).

It's possible, of course, that Barry and Steve are themselves being scammed. At the risk of being slightly indelicate, people in the UFO community have a very hopeful disposition - with a desire to believe in amazing things perhaps overriding the advice of "experts", who they feel have been wrong so many times before. Here's a list of the groups that Steve Mera shared the video to:


Presumably just the groups he's a member of - but it's a rather limited audience.

Staff member
The whole thing is rather odd. It's got a very limited audience - seemingly mostly people in these paranormal/UFO type groups. Then I saw someone tweeting about it, a Walter Baltzey: 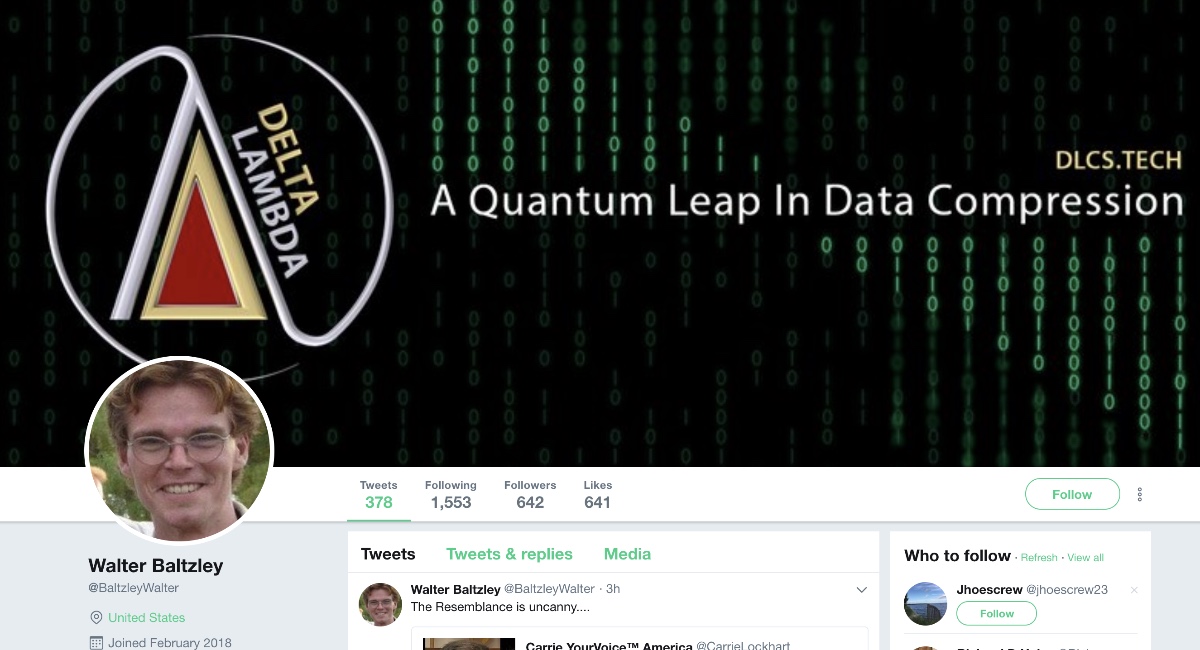 His twitter feed looks like a caricature of a Trump supporter, almost Russian troll-like, with references to the QAnon conspiracy theory.

He claims to be a co-creator of DL, but I could not find him, but then realized he's on there as "Walter Ignatius" with different hair. 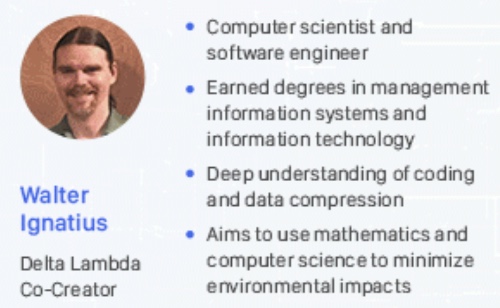 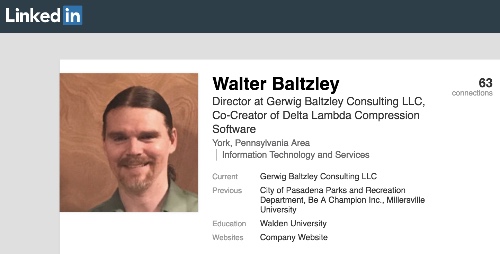 Who is on DL as "Nathan Andrew" 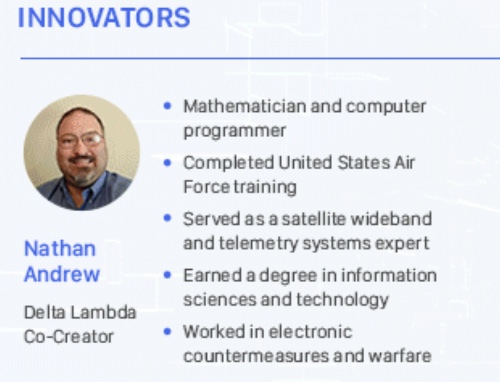 Staff member
Back to the more tangible technical impossibilities: 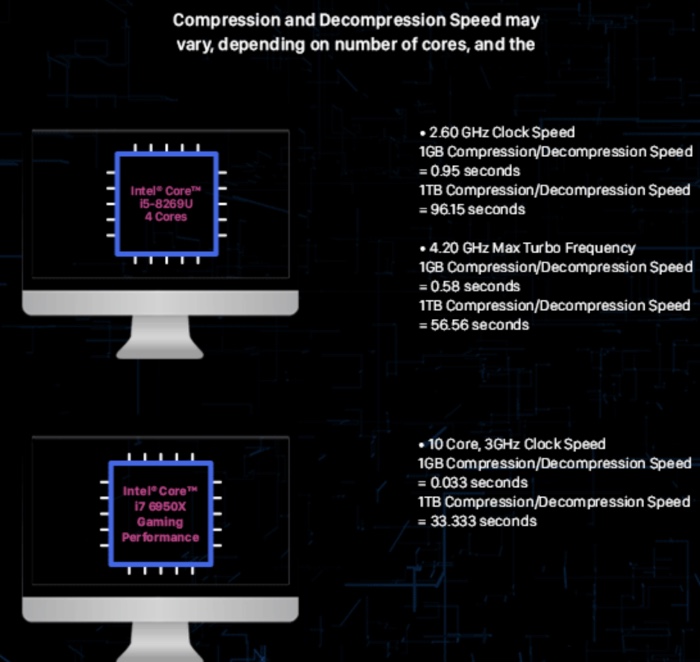 There's so much wrong here it's hard to know where to start.

1TB is 1024GB, yet the claim compressing 1TB on a single core processor only takes 100x as long as compressing 1GB.

1GB compressed single core @2.6 GHz takes 0.95 seconds. With 10 cores at 3.0Ghz they claim it takes 0.033 seconds, which is 28 times as fast, despite having only a theoretical increase in processing power of 11.5 (assuming perfect parallelization of the algorithm).

1GB in their claimed 0.033 seconds is a bandwidth of 30 GB per second. The world's fastest SSD drive tops out at 6.8GB/s. So they are claiming a speed that is five times faster than you can possibly even just read the data off the drive. And that's with a fancy advanced datacenter drive. Consumer SATA3 high end drives top out at 0.5GB/s. Actual real-world data compression, like H.264 video compression, is MUCH slower than this. (I've got an 8 core 3.2 Ghz iMac Pro, and it does around 0.05GB/s compressing raw video from memory) and again, they claim to compress movies which are ALREADY COMPRESSED).

So it's all obviously not going to work. The question then becomes, what's going on? Who is being scammed?

Hmm, Nathan Andrew Gerwig - So perhaps it's just a glitch with middle names.

Hmm, Nathan Andrew Gerwig - So perhaps it's just a glitch with middle names.
Click to expand...

I’ve only signed up to this website after seeing delta lambda promoting its self begging for money for something that if it worked would be a multi-billion pound product. I voiced my concerns and have been told to speak to their technical team on why it’s not a steaming pile of chip. I was wondering would you do it on my behalf or on your own and share your findings?

You have a much better understanding of compression than my very basic understanding. I know enough that the explanation they give sounds like crap.

They gave the linked in pages and said they would be happy to answer questions.

Fattyboombatty said:
I voiced my concerns and have been told to speak to their technical team on why it’s not a steaming pile of chip. I was wondering would you do it on my behalf or on your own and share your findings?
Click to expand...

I'm quite sure their technical team is fully aware that it does not work - simply because it would fail to compress things by the suggested amounts.

Staff member
I just realized the Steve Mera is the same person who took the photos of the balloon that were used by Tom DeLonge's enterprise to illustrate their initial announcement.

Why 1000x compression is "impossible".

Of course 1000 times compression is possible for some files.

The following compression/decompression algorithm works with all files/bit-strings and achieves 1000x compression of both P and Q.

Further, for all compression algorithms, the greater the compression, the exponentially fewer the files that achieve that level of compression.


That is, only about 10⁻²⁹⁸ percent of these files can achieve a 1000x compression level.
You must log in or register to reply here.