The geoengineeringwatch.org website has made the claim that the group Anonymous is supporting them, based on a video that appears to be from Anonymous. I am skeptical that Anonymous would have anything to do with the chemtrail conspiracy crowd, I could be wrong.... does anyone have any knowledge of whether that claim is true? 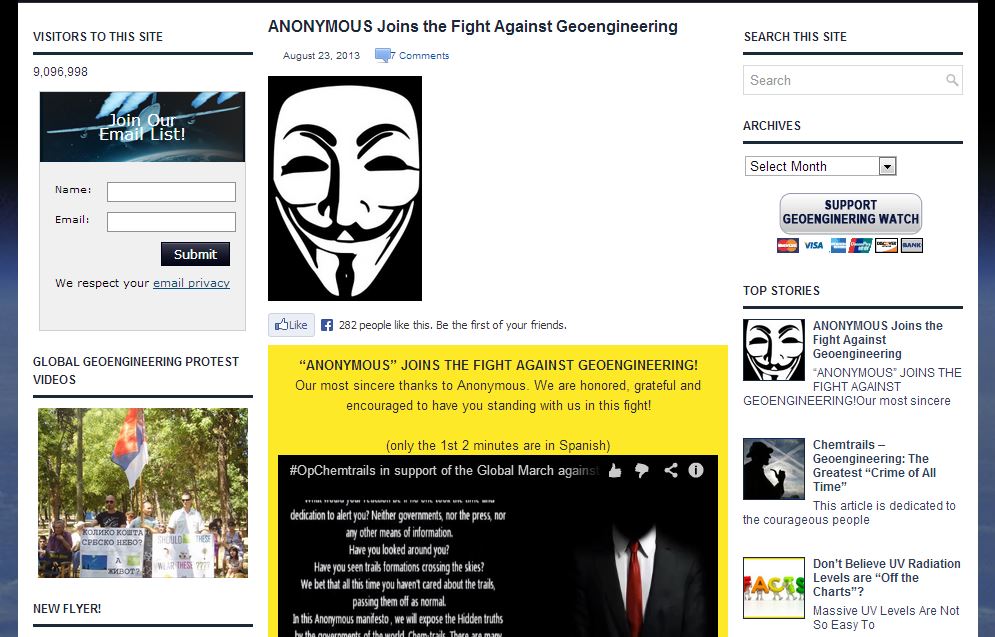 There have always been anonymous people involved in the chemtrails hoax. It hasn't done them any more good than any of the people who use their real names. What difference would it make?

The Youtube video originates from Anonymous Peru. You never see much on 4Chan (I had to ask as I am not down with the kids. Most people that raise the subject seem to get a spanking. However given that every second believer on Facebook tells you they are in Anonymous and own a plastic Guy Fawkes mask, probably made in China and washed in the tears of the child workers, who knows?

Anonymous is a pretty disparate group of people, I looked into AnonNews.org, Anonymous news aggregator to see what conversations included the term 'chemtrails' and there are a number of anonymous people trying to convince the group of the conspiracy theories about chemtrails and HAARP.... at least the person didn't accuse the skeptics of being government shills . I have the impression that Anonymous as a group does not endorse the conspiracy theory, more likely the video was a wannabe or to give the impression that Anonymous does support the chemtrail crowd.
Last edited: Aug 26, 2013

Staff member
Anonymous isn't really a group. It's lots of very small loosely affiliated groups. Anyone can start a youtube channel and say they are Anonymous, then upload a video using the anonymous template.
Last edited: Aug 11, 2015

Problem is Anonymous is not intended to be a group, so no. But alot of people that use Anonymous as their name often believe in every conspiracys

How has anonymous demonstrated their support? A youtube video like that is pretty easy to make. I see no action which would be supportive.

It might be useful for anonymous to search for documentation of the chemtrails claims, and finding none.
Be careful what you wish for, Dane, the truth is a double edged sword and if a worldwide search has failed to produce any evidence, what can be concluded?

I did read a couple of comments about "occupy" presence at the march. I think this was mostly triggered by the presence of the Guy Fawkes masks, I don't think anonymous as a group would like to be seriously connected to something like chemtrails...

Off topic but I find the use if the Guy Fawkes mask both ironic and annoying. I understand the reference to it by Alan Moore but I once bumped into a small group in the city centre demonstrating and I asked them the relevance. One reply was "He was a freedom fighter". I replied as follows.

James the First had been king of Scotland for 30 or so years and King of England less than 3. The first thing he did when he became English king was make peace in the war with Spain. Also having Scotland on board strengthens the protestant deformations and helped form the Union. He was more forward thinking towards Catholics and had no issue with them in court. He was generally well liked.

Guy Fawkes was a man that was part of a plot to kill the king, his wife and children and Parliament. Then there was to be an uprising so as to allow them to kidnap a 9 year old girl, set her on the throne as a puppet queen and force her into a marriage with a catholic. Then it was hoped that Spain would invade in support with the eventual aim of Britain coming back under the authority of the Church of Rome. A bloody war would have ensued all for the formation of a central world order. Given that the Church of Rome was deeply unpopular, especially in Scotland, and we still celebrate the burning of an effigy of Fawkes, in fact at one time it was an effigy of the Pope, explain to me how Fawkes was a freedom fighter?

For some reason he walked off.

The folks musing that "Anonymous" might help the chemtrails hoax had best remember how they had their way against the cult of Scientology.

One of the core mantras of Anonymous is that anyone and everyone can identify as an "Anon" if they so choose(which is kind of funny given what that implies - <nefarious public official> could become a part of Anonymous by this logic).

Because of this, you'll find Anonymous "supports" all kinds of conspiracy theory movements, even organizing Op(eration)s to that end. This particular example doesn't really mean a whole lot when it comes to the entirety of the group(if you can call it that) believing in chemtrails. The majority "support" some very valid causes, usually with a lot more fervor than the conspiratorial ones. It's really hard to speak as to Anonymous as a whole and say they support the chemtrail theory(or anything) without the caveat that some portion of those Anons disagree.

But, I guess the core of the issue here is whether this tenuous support will mean anything for the chemtrail "movement". I don't think it will. Anonymous has been largely ineffective in recent years as the decentralized, non-hierarchical nature renders it difficult to muster and maintain support long enough to accomplish anything like Chanology. At their best, Anonymous is good at raising awareness to an issue by putting it in front more and more eyeballs over time. Any other noteworthy incident commonly attributed to their name(such as the Stratfor and HBGary hacks) is isolated and can't really be classified as a result of the existence of Anonymous(as opposed to the same people who would be doing the same things whether or not the group exists or they identify with it).
Last edited: Aug 27, 2013

Dane Wigington has removed the page at which he made the original claim.
Original link:
http://www.geoengineeringwatch.org/anonymous-joins-the-fight-against-geoengineering/ 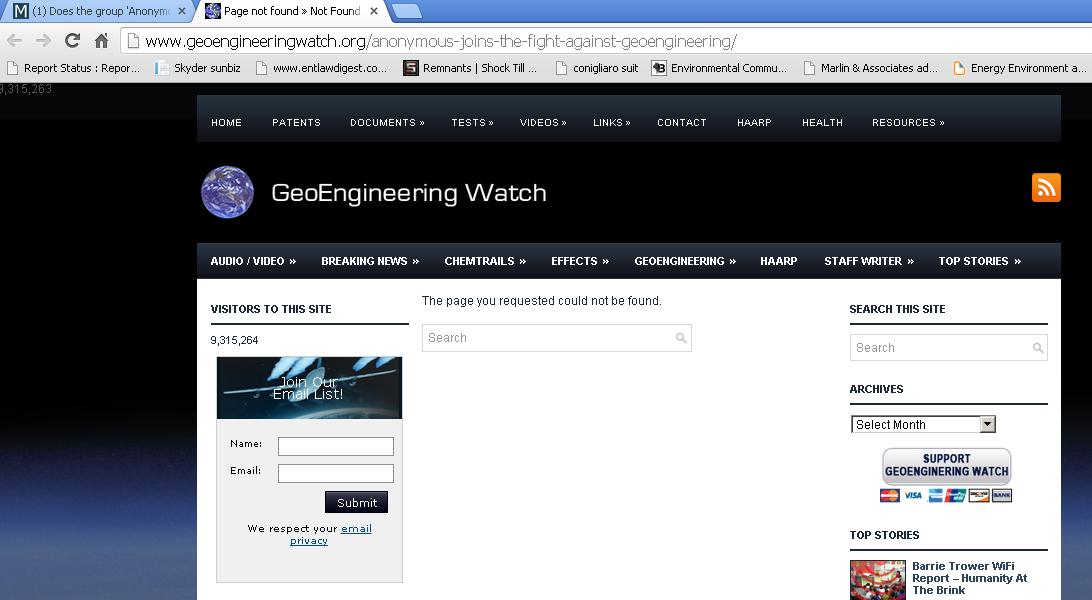 I think quite likely this was a publicity prank put on just in advance of the great global march against chemtrails Aug 25, 2013.
That is the only video on that particular youtube channel:
http://www.youtube.com/channel/UCF-4RFXnpR_hvU2SM65Ziug/videos

for some reason, he pulled it.

Staff member
That's why you should add an archive.is link to things like this.

It's on archive.org though:
http://web.archive.org/web/20130823...ymous-joins-the-fight-against-geoengineering/

On one of his recent broadcasts, Wigington claimed that in response to that article he had received an email that an Arabic speaking discussion forum had been pushing the idea of chemtrails.

Staff member
Dane is making a very similar claim again, that "Anonymous" is helping him:
http://www.geoengineeringwatch.org/anonymous-covers-climate-engineering-threat/ 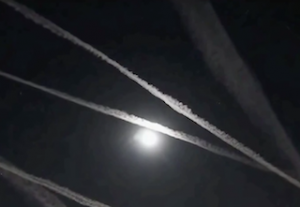 The group "Anonymous" is constantly and actively working toward exposing tyranny in countless arenas around the globe. The video below addresses the most critical issue of global climate engineering, it was assembled by Anonymous and just forwarded to me. The gravity and immediacy of the total destruction being inflicted on our planet and our health from the ongoing geoengineering programs is immense. The threat posed by the constant toxic atmospheric spraying and radio frequency bombardments cannot be overstated. My most sincere gratitude to Anonymous for their help with sounding the alarm on the climate engineering insanity.
Dane Wigington
geoengineeringwatch.org

All the video is is one of Dane's speeches that some random person has appended a short title sequence to.

Staff member
People who are actually into the Anonymous/hactivist culture generally scoff at chemtrails:


Hacktivist Culture has never come across any credible evidence of the existence of ‘ChemTrails’. In some alternative universe ‘chemtrails’ may exist, but we do believe that the only place where such a thing would occur is in a James Bond movie. A movie where a villainous character or a primary antagonist is out to kill everyone on the planet.

All of the alleged evidence is easily explainable through basic science facts and simply points to natural processes, pollution, and jet contrails.

He's referring to a supposed "hack" of documents by "AnonSec", the leak included a variety of random files, none of which were ever secret (at least recently), and are generally just ordinary chemtrail stuff that was debunked years ago. Like: 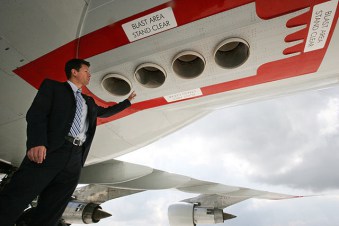 People think that if you stick "Op" in front of a wrd, then you'll get taken seriously on Twitter or Facebook. Hence there's thousands of "Op" accounts. They don't mean anything. The only thing "Anonymous" about them is that they don't say who is behind them. It's not an actual "Anonymous" group.

Mick West said:
He's referring to a supposed "hack" of documents by "AnonSec", the leak included a variety of random files, none of which were ever secret (at least recently), and are generally just ordinary chemtrail stuff that was debunked years ago. Like:

The list of files (partially visible in this image, for instance) includes files seemingly related to the Global Hawk 872 drone. I haven't taken the risk of clicking to download dodgy zipped files from unknown sources. Do you know what those relate to?

I just downloaded them and scanned them twice - nothing malicious reported among 39 files.

Trailblazer said:
The list of files (partially visible in this image, for instance) includes files seemingly related to the Global Hawk 872 drone. I haven't taken the risk of clicking to download dodgy zipped files from unknown sources. Do you know what those relate to?
Click to expand...

I downloaded them. They are all stuff that is publicly available, like that png is just a screenshot of this NASA page:
https://airbornescience.nasa.gov/flight_reports/Global_Hawk_872_04_09_15

This is the text content of one file, titled SOURCES:

what in the world are they spraying

Claims of Drug Overdose in the Death of George Floyd