A recent entry on geoengineeringwatch.org appeared this week. 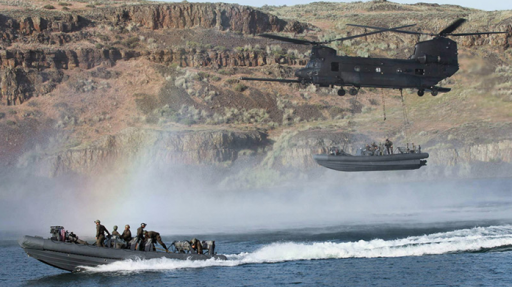 The vast majority of global populations are unfortunately not yet willing to face the fact that Earth's climate and life support systems are being totally disrupted and derailed by a global power structure that is inarguably insane and completely out of control.

"US military planners have been ordered to war game climate change scenarios, focusing on geopolitical and socioeconomic instability linked to extreme weather".

"US military planners have been ordered to war game climate change scenarios, focusing on geopolitical and socioeconomic instability linked to extreme weather".

The original quote (in fact, most of the information Wigington presents) is from Climate Change News.

US military planners have been ordered to war game climate change scenarios, focusing on “geopolitical and socioeconomic instability” linked to extreme weather.

“Mission planning and execution must include identification and assessment of the effects of climate change on the DoD [department of defence] mission,” it reads.

Under DOD DIRECTIVE 4715.21 chiefs of staff, equipment buyers and health advisers will need to integrate climate change into any new purchases, missions or infrastructure plans.

The source of the Defense Department Directive is Executive Order 13653 (2013).


In simple terms, both are attempting to develop policies and capabilities that are responding to global climate change.

In other words, these documents are following the exact opposite behavior implied by Dane Wigington.

Even by geoengineeringwatch.org standards, it is a pretty poor effort at distorting the facts.